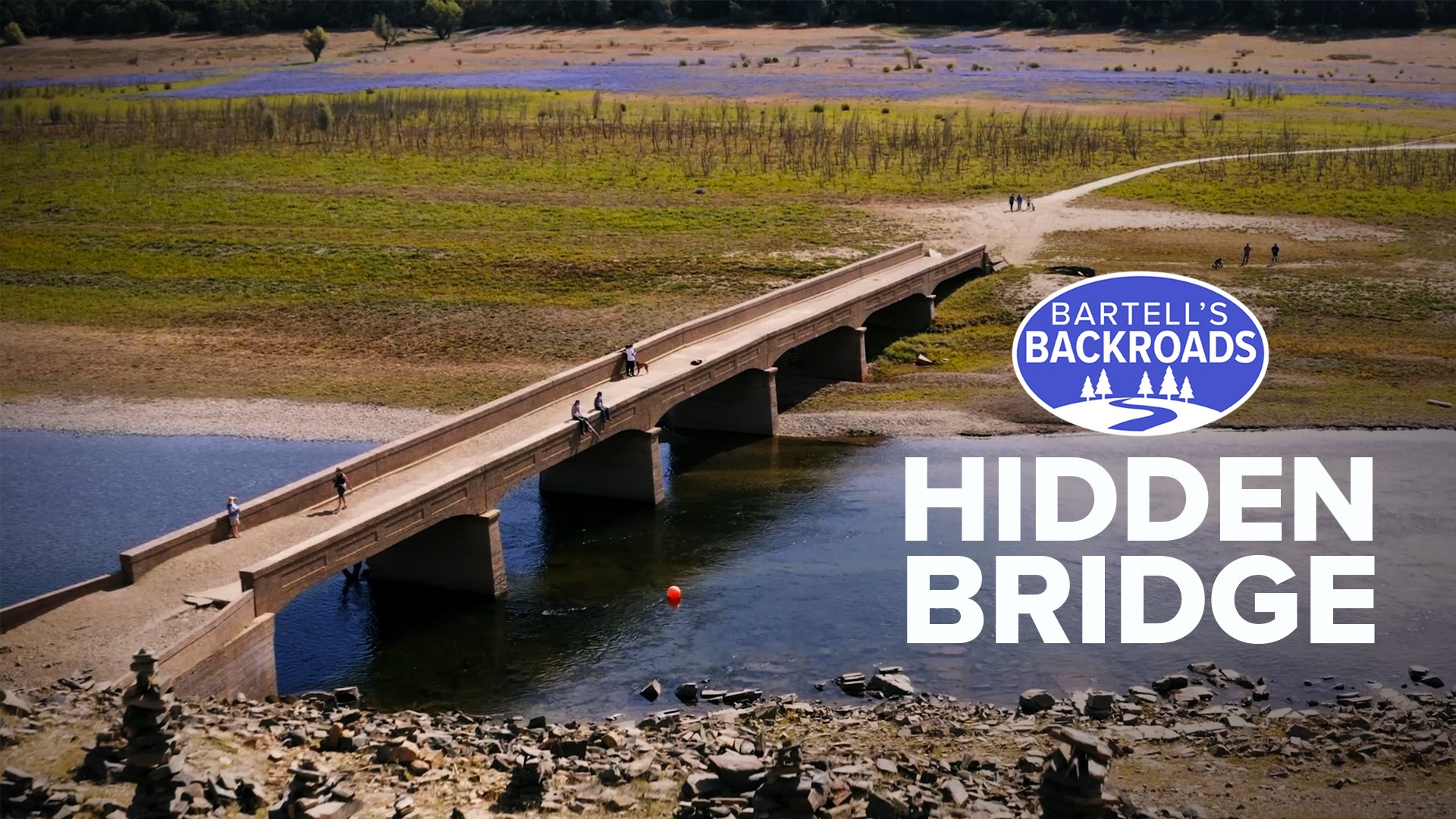 PILOT HILL, Calif. — Spring has very much sprung at Folsom Lake and the lupine wildflowers are everywhere.

A bloom of this magnitude is a rare sight at Folsom Lake, especially at the beginning of what looks to be drought year. Satellite images from 1985 to 2020 show the fluctuating water levels every time drought hits Folsom Lake. This year, lake levels significantly dropped during wildflower season, allowing the lupine plant to grow and emerge where the water once was.

The low lake levels also allowed something else to emerge.

Many know it as the “hidden bridge” or the “flooded bridge” but historian Roberta Long says the original name is the old Salmon Falls Bridge.

“You can only see it when the lake is low. Like during a drought,” Long said.

The Salmon Falls Bridge is located along the eastern edge of the Folsom Lake State Recreation Area near Pilot Hill. Long says the bridge allowed miners, farmers and early settlers to cross the south fork of the American River and pass through the town of Salmon Falls.

“This was the hub for all the mining towns,” Long said. “Originally there were two bridges."

The concrete bridge that stands today was built in 1925, but remnants of older bridges and the mining town that surrounded them can still be seen.

Gold was discovered near Salmon Falls along the American River around 1848. In 1850, entrepreneur Reuben Berry laid claim to land below the falls and built the town of Salmon Falls where the river and Sweetwater Creek merged.

“It had gold on both sides," Long said.

After the gold was picked clean, most of the miners left and the town was reduced to a farming community. Then in the 1950s, construction of the Folsom Dam started.

“The people that lived here had to sell their property to the state,” Long said.

When completed, it didn't take long for the Folsom Lake dam water to fully submerge town of Salmon Falls and the bridge that once took people from El Dorado County to Sacramento.

“If it hadn’t been for Folsom Lake, we might be using it,” Long said.

Today, miles of hiking trials take you through the Folsom Lake State Recreation Area where you may see remnants of mining history and get an idea of what it was like when the Nisenan Tribe lived there.

If you plan on hiking at the lake, don’t forget your camera. There’s never a bad picture during wildflower season.

Special thanks to the Placer County Museum for tracking down historical photos of Salmon Falls for this story.

If anyone is interested in signing up to become a museum(s) volunteer, please call 530-889-6500 or email museums@placer.ca.gov. Check out their website to learn more and the volunteer program and see their extensive catalog of local history presentations and artifact highlights.