How a castle ended up in Death Valley | Bartell's Backroads

The odd story of a con man, his fake gold mine, and his unlikely friend. 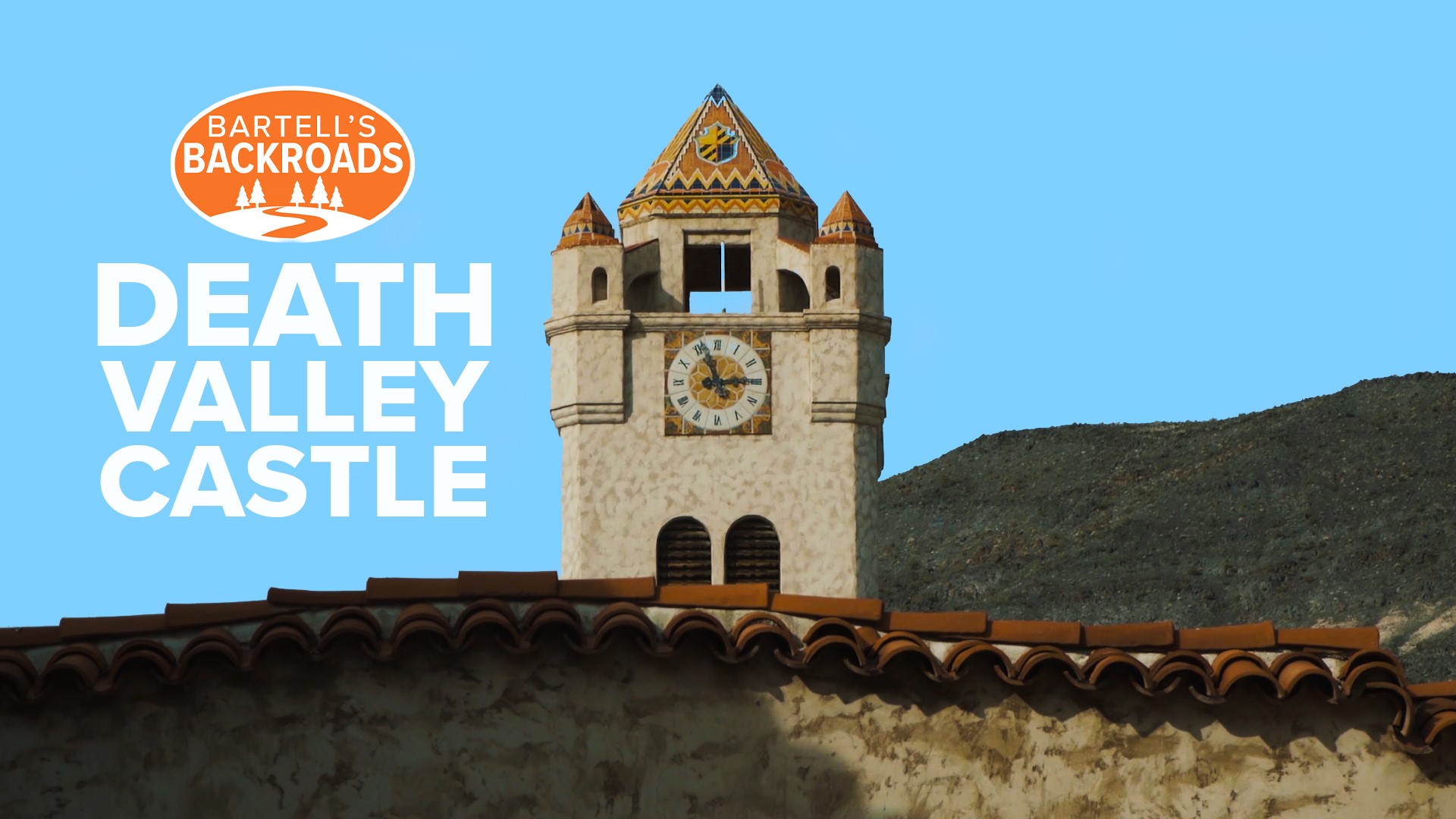 STOVEPIPE WELLS, Calif. — At first glance, Death Valley, Calif. looks like a horrible place to build a home. The name alone should scare off any developer -- not to mention getting building supplies to a place so dry, so dusty, and so unbearably hot seems like a complete waste of money. But not only did someone build a home in Death Valley. They built an entire castle!

At the easternmost edge of Death Valley is Scotty’s Castle -- a Spanish-Mediterranean style villa with more than a dozen rooms, a terracotta courtyard, and a clock tower with chimes. Park Management Assistant Abby Wines said the only reason the castle is here is because of a conman named Walter Scott, also known as "Death Valley Scotty."

“He had been an entertainer in Buffalo Bill Cody’s Wild West Show,” Wines said.

“He claimed to have a gold mine,” Wines said.

Scotty thought if he was going to create a fake gold mine, why not have it in a scary sounding place like Death Valley?

The con worked. Scotty made lots of money conning wealthy businessmen, but the con came to an immediate end when one of the investors, Mr. Albert Johnson, decided to check up on Scotty’s mine.

“He called his bluff. So what Scotty did was stage an ambush,” Wines said.

Long story short, the fake ambush outside the fake gold mine ended in failure. Scotty’s brother accidentally ended up with a bullet in the leg and everyone involved came clean. But instead of calling the sheriff, Johnson had other plans.

Johnson had such an exciting time in Death Valley that the wealth insurance company owner returned year after year to visit Scotty, paying him healthy sums to keep the gold mine façade alive.

Being the storyteller he was, Scotty told visitors *he* built the castle and it was with profits from the mine.

“Mr. Johnson would play along and if anyone asked him who he was he would tell him he was Scotty’s banker,” Wines said.

“He found out this was government land,” Wines said.

As it turned out, early survey markers plotted by the U.S. government were wrong. When corrected, Johnson’s land was inside Death Valley National Park. It took him years of litigation to correct.

“The House, the Senate, and the President made a law that said only two men could buy this land from the park service,” Wines said.

Those two men were Scotty or Johnson. In the end, the new land deed went to Johnson, but Scotty lived in the Castle until he died in 1954.

In 1970, the castle was sold back to the National Park Service and for decades tourists were allowed to tour the property. But in 2015, a flash flood damaged much of the property.

“Rocks and mud built up enough pressure to bust through [a] wall,” Wines said.

Former investors did take Scotty to court for his scam, but nothing came of it -- partly because Johnson, who was a victim himself, defended Scotty.

“Under oath, Mr. Johnson said Walter Scott paid me back every dime I spent on him with laughter,” Wines said.

Thanks to Johnson, the legend lives on!