Once upon a time, gas stations needed low prices and a good gimmick. Visit one of the most iconic gas stations along Highway 101. 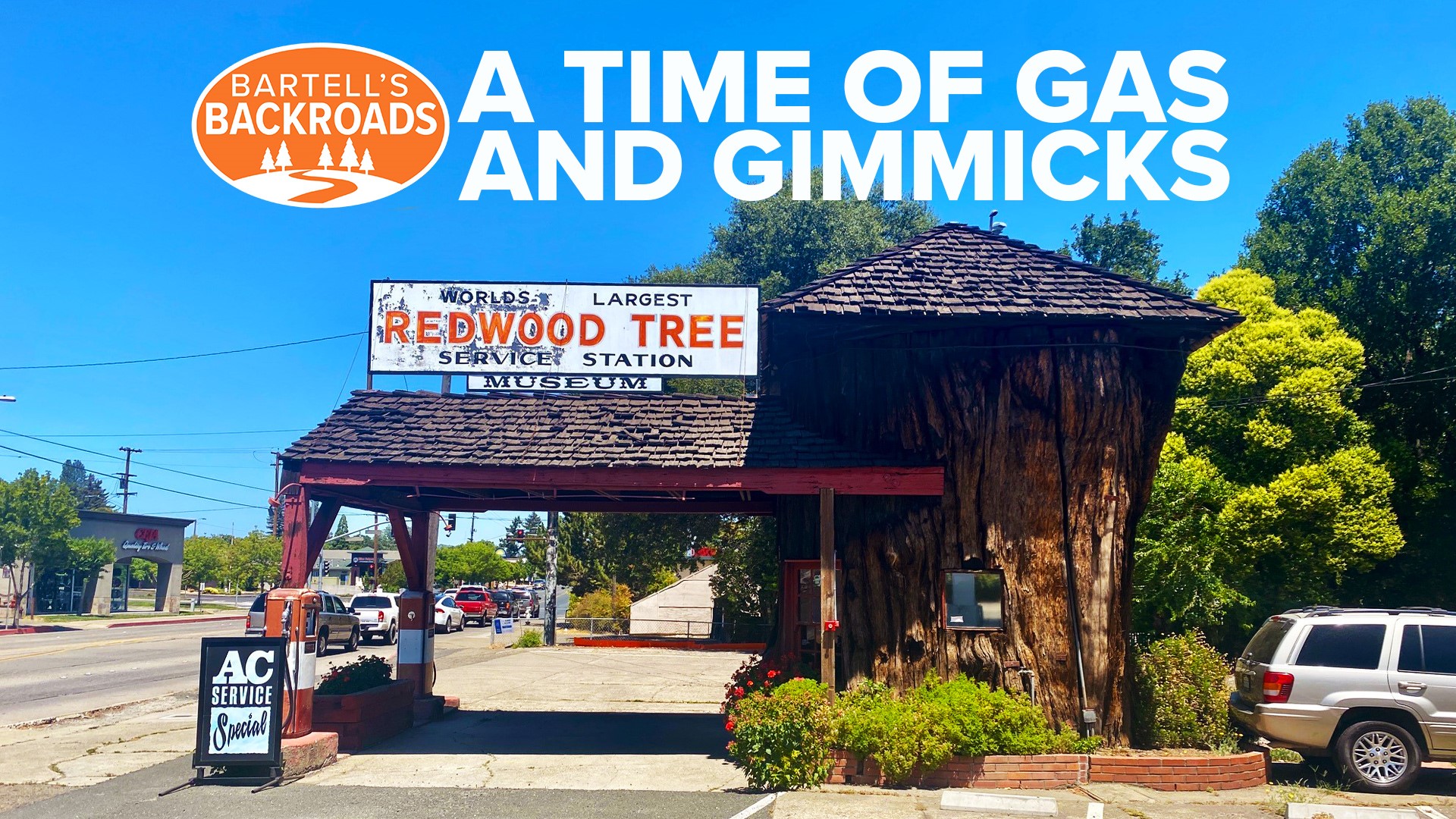 UKIAH, Calif. — The 101 is California’s longest highway. Following its completion in 1926, the 808-mile-long road introduced drivers to scenic views, roadside attractions, and a variety of eye-catching service stations eager to take the money from travelers and fill up their fuel-thirsty vehicles.

One of the most Iconic Highway 101 service stations is the Redwood Tree Service Station in Ukiah.

“Yes! This is a real redwood. They cut it into four pieces,” Martyn said.

The hollowed-out log building was built in 1936 by Bob Ford and Al Weger from a massive 1,500 year old redwood that was previously struck by lightning.

“It was cut down about 15 miles from here on the Weger property,” Martyn points out.

Originally standing at about 250 feet tall and just over 80 feet in circumference, it was no easy task getting the tree to its current location.

“They had to put two saws together just to do it. This was all done by hand,” Martyn said.

After cutting an 18-foot-tall section from the tree, they had to split the log into four pieces so it could fit on a truck.

“How they split it up, I am not sure, but after that they honed it out to make this shell. The wall is about 18 inches thick,” Martyn said.

The Redwood Tree Service Station has seen a few owners over the years. After WWII, Al Weger sold his portion of the business to Bob Ford. Bob then enlisted the help of Gerald’s father in-law, Jess Rawles, and the two started a different kind of war.

“There were like 15 or 16 different gas station on the 101 and they started a little war, a gas war,” Martyn said.

Prior to the modern-day gas station convenient stores, service stations attracted customers with strange gimmicks. Oddly shaped gas stations could be found all over America and The Redwood Tree Service Station not only had a gimmick, but it was also had the lowest prices on the 101.

“Pretty soon, there was only one left, the Redwood service station,” Martyn said.

The Redwood Tree Service Station remained king of the road until the 101 was rerouted outside of Ukiah in the 1960s. Today, Gerald's son runs the business, but they no longer pump gas.

“We are in the carwash business and the service business,” Martyn said.

These days, no one mans the redwood tree. It was turned into a museum so modern-day travelers can experience the bygone era of the themed service stations. The museum is open by request. Just ask a service tech at the front desk.