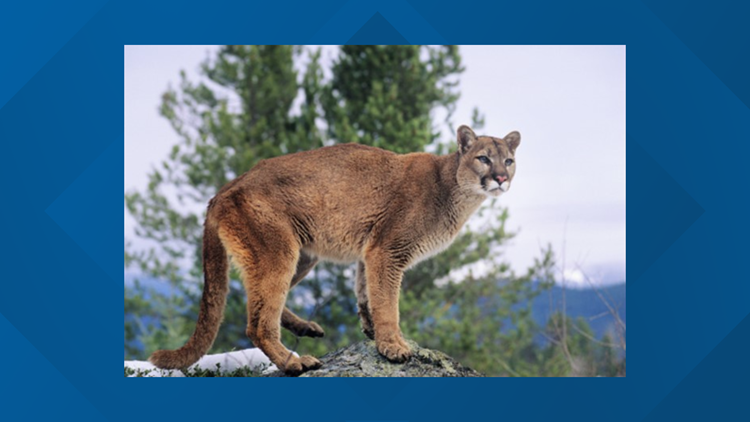 VALLEY COUNTY, Idaho — A local hunter killed an adult mountain lion after it attacked and partially ate a pet dog a few miles south of Cascade.

The attack happened late Friday night on Jan. 3, according to Idaho Department of Fish and Game.

On Saturday morning a neighbor found the remains of the shepherd mix cached, stored for the lion to return later to eat again, behind the dog owner's home. The neighbor notified the owner and called the Valley County Sheriff.

Fish and Game officers, a houndsman and a local hunter tracked down a mountain lion close to the attack area and spooked it from a day bed.

Hounds then forced the lion to run up a tree where it was killed by the hunter.

The hunter had a valid mountain lion tag.

Investigators say, they didn't find anything unusual when inspecting the lion. He was a healthy young adult with a few porcupine quills in his muzzle and head region, something that wildlife officials say is common byproduct of targeting that sort of prey.

Just a few days ago on New Year's Eve another family lost their dog to a mountain lion attack along Callendar Road east of Highway 55.

RELATED: 'Every day was a new adventure with her': Valley County man reacts to mountain lion attack that killed his dog

That home was only one mile away from the Jan. 3 attack.

The lions responsible for the New Year's Eve attack were never found.

According to Idaho Fish and Game, "it is unclear whether the two attacks were carried out by the same lion."

The forested edges of Long Valley is home to many mountain lions but they are normally never seen.

Most of the time these cats avoid people and live in the shadows. However, Idaho Fish and Game says, "in the rare instance where a lion chooses to target domestic pets as a food source, the risk to human safety is heightened, a situation that Idaho Fish and Game takes very seriously."

Idaho is classified as mountain lion country, according to Idaho Fish and Game. These attacks are a reminder to brush up on how to stay safe when living near mountain lions and what to do when you encounter one.

Idaho Fish and Game recommends that if you come in contact with a mountain lion never run, turn your back on them, try to hide or crouch down.

You will want to appear as large as possible at all times.

Stand on a stump or next to others while still leaving an escape route for the cat. If you have children with you pick them up without bending over.

You can shout and wave your arms but do not scream because "a high-pitched scream may mimic the sound of a wounded animal," wildlife officials say.

RELATED: 'I tried to punch it in the eye': 8-year-old boy fights off mountain lion attack with a stick