Follow up: Charlie the dog befriends tortoise in forever home

There's yet another twist in the miraculous reunion story. 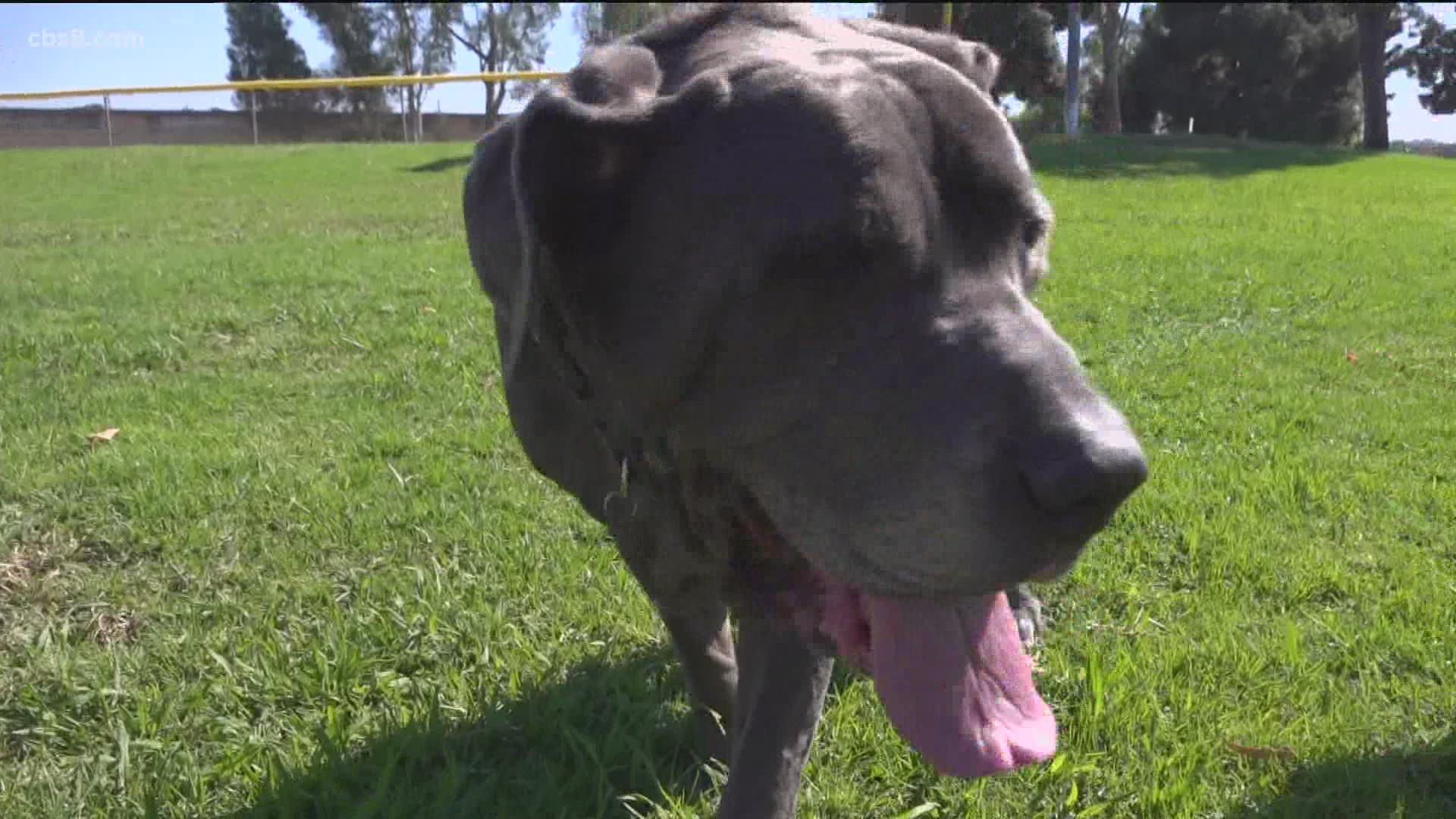 CHULA VISTA, Calif. — Earlier this summer, News 8 met Charlie the mastiff. The dark grey, smiley dog had been at the Rancho Coastal Humane Society longer than any of the others. When we first profiled Charlie, we hoped it would end in adoption. But it turned out to be a more miraculous story than we could have ever anticipated.

In fact, When you see Charlie nowadays in Chula Vista, you'd hardly believe he sat in a kennel for eight months.

To recap, Charlie's journey started when his original owner died last year. That owner had raised Charlie since he was a big-pawed puppy. Charlie was taken to the animal shelter where he was overlooked for many months: 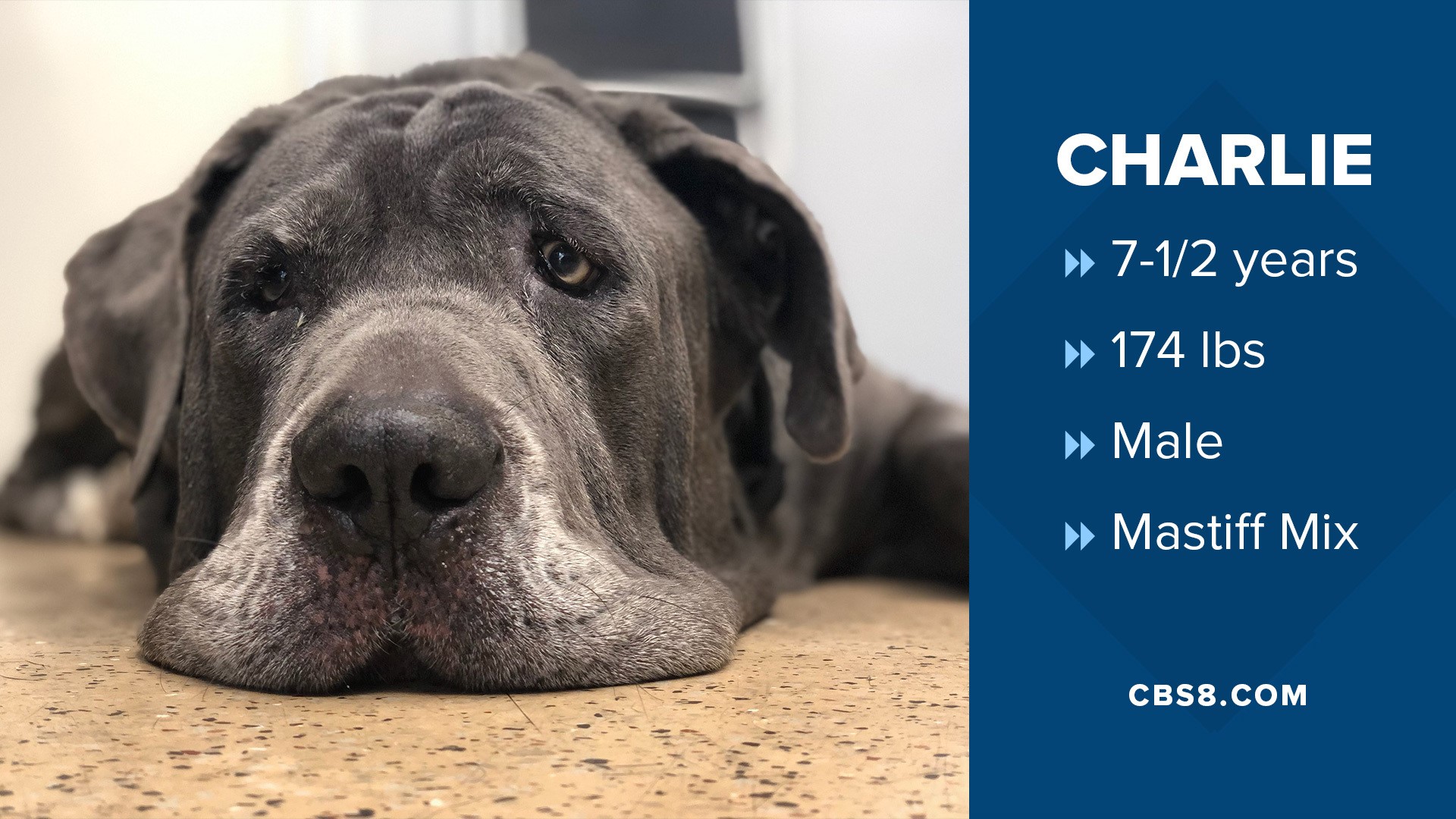 Well, it turns out Charlie and his late owner had a caretaker, Tim Yanitor.

Tim wanted to keep Charlie once the owner died, but didn't have the resources at the time.

“I had to close that metal gate on him and lock him in there and as I walked away, he was just barking that - that bark that he just didn’t understand and I cried," Tim said in an interview in September.  "And that was the last time that I saw Charlie.”

Tim went on to help another woman as a handyman named Lisa and her dog. Coincidentally, Lisa had a mastiff named Burt. Sadly, Burt died just a few days before News 8 profiled Charlie.

"When Burt, my Mastiff died, I had an outpouring of people that were devastated," said Lisa.

Lisa, still grieving the loss of Burt, saw the story and wanted to adopt Charlie, unaware that Tim once cared for him.

"I looked at the video and fell in love with Charlie," said Lisa in September.

Neighbors told Tim about News 8's story as well, and there was no question - he had to get Charlie back. Lisa and Tim called the Rancho Coastal Humane Society to explain the bizarre pattern of events and inquire about adoption.

And so one mastiff lost their person, one person lost their mastiff, and a blended family was born.

"I think when he sees me, he’ll know he found his home again," said Tim back in September as he anxiously awaited to be reunited with Charlie: 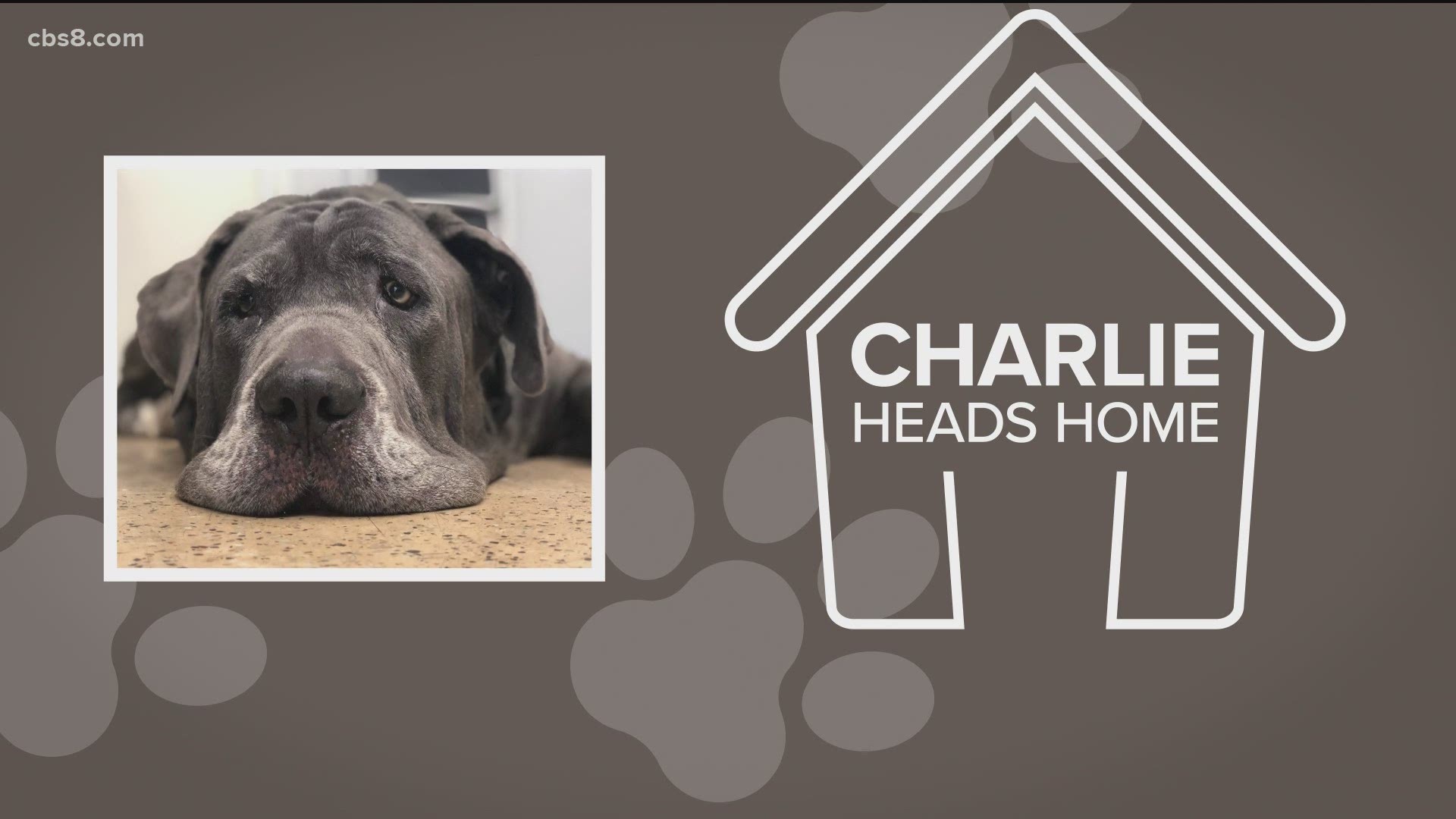 Sure enough, the two picked up just where they left off, and it's been that way for the last two months. Since their emotional reunion, Lisa, Tim and Charlie are doing great.

"He’s so happy to just be connected back again," said Tim when we caught up with him. "I think he’s forgiven me."

Charlie is an avid cuddler, all 174 pounds of him.

"I’ll take him to bed with me a lot of times, and just like - you know you just hang on to him," said Tim. "He’s just a big dog you know. He’s really just - so glad that it worked out the way it did.”

"They snuggle together all the time and there is no doubt in Charlie's mind that this is his place and he is well-loved," said Lisa. "Had you not run the story, none of this would have materialized for us."

He went from a orphaned shelter dog to a relaxed porch dog.

"And he just laid on that porch like he’s the new king," said Tim when he showed us a photo of Charlie:

Here's the twist - there's yet another character in this story, whose timing also fell right into place. It turns out that Charlie is helping someone else come out of his shell.

"Tank I got just a few days before I became aware that Charlie was available," said Tim.

"They are now buddies," said Lisa. "Sometimes Charlie will just lay there and watch him eat, which is fascinating because it's so prehistoric looking."

It turns out that in their old life, sure enough, Tim and Charlie had tortoises, so Charlie is quite fond of them.

"They were like walking rocks that he was fascinated with," said Tim. "When I brought Charlie home, and he saw this one - which looks exactly like the other male, he just went right into his routine.”

"An interesting note - both Charlie and Tank have become very beloved and therapeutic already to a rapidly growing number number of individuals on the Autism Spectrum," said Lisa. "They are helping by introducing some happiness and humor into their lives."

It's a tale that's almost hard to believe.

"Really when you look back on it and the orchestration of the events that all happened in that one week, it’s just unbelievable," said Tim. "I mean you know, you really know that there’s a little more going on than what we see.”

The timing couldn't have aligned any better.

When asked if it was fate that Tim would get Charlie and Tank, especially just days apart, Tim said, "Without a shadow of a doubt, I know that there is.”

And Charlie is finally home, for good.

"He will never have to know another place to live," said Lisa.

If you too would like to adopt a pet or two, there are plenty of animals at the Rancho Coastal Humane Society looking for a home.

"Can you please say and spell your full name for me?" pic.twitter.com/QwCGSNPuOW