It's not fiction. The Asian giant hornet is a threat to crops nationwide. Now, a Jacksonville medical expert is helping track them down. 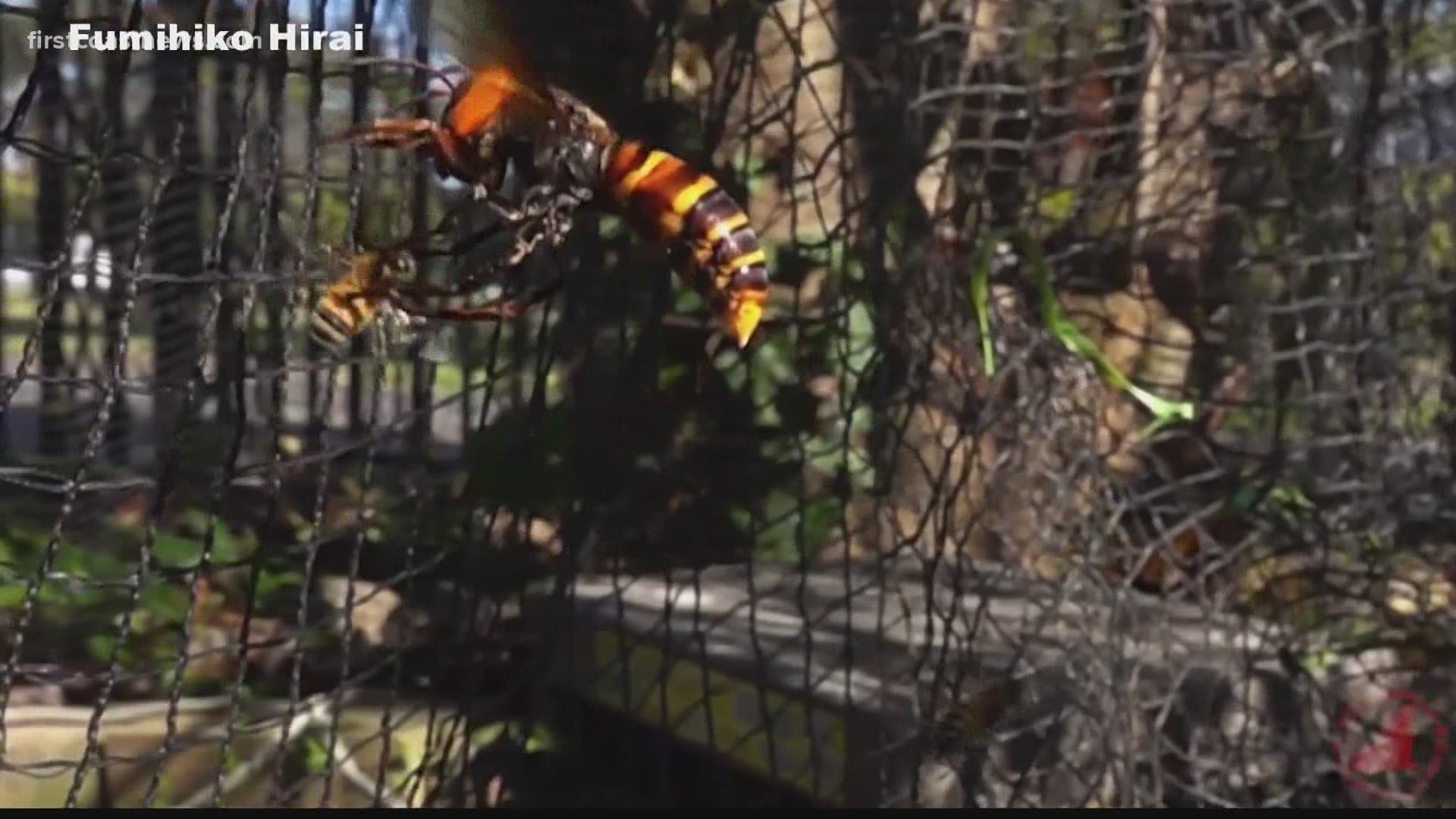 JACKSONVILLE, Fla. — It is not a rumor someone is spreading around the internet.

The Asian giant hornet, also called the "murder hornet," is a real threat to farmers around the U.S.

That means it is also a threat to our crops, our food supply, and, therefore, our economy. Honey bees are critical to pollinate our crops and keep our food chain going.

However, the giant hornets can wipe out a colony of honey bees in no time flat.

According to the Discovery Channel's "Attack of the Murder Hornets," a single murder hornet can behead 20 bees in 60 seconds.  They can decapitate honey bees so fast that they can destroy a hive of 30,000 bees in just 90 minutes.

Meanwhile, a veterinarian from Jacksonville is now a "citizen scientist" in Washington State, where she moved recently.

Dr. Peggy Shashy was a veterinarian on the First Coast for about three decades, but now she is devoting a lot of her energy to help the Washington State Agriculture Department trap the Asian hornets.

"If they got into another state, it would be devastating," Shashy said. "Devastating."

She says the move is on to persuade people to stop calling them "murder hornets" because "people started putting up signs in state parks saying this hornet could decapitate people."

However because they do decapitate bees as a protein source, the giant Asian hornets have to be stopped. So far just one nest has been found in the United States.

It was in a tree in Washington State, about an hour from where Dr. Shashy lives now.

So for the WSDA "citizen scientists" program, Dr.  Shashy hangs traps on her property, among her apple and fruit trees.

Big plastic soda bottles are filled, she says, with the perfect cocktail to attract the hornets.

"We use orange juice with no pulp and rice wine with 10% alcohol," Shashy explained.

The bees are not attracted to that cocktail. There are no hornets in her traps yet, but she will continue to add more traps on her property.

The giant Asian hornet nest, which was found back in October, produced important scientific information. "

Best of all, the nest was eradicated. Good thing because it contained 500 hornets and 76 queens, which can mate and start their own colonies.

How scientists found that nest is pretty wild.

They wound up with four living hornets out and on the loose. The hope was they could strap radio trackers to those and they'd guide the scientists to their nest.

It all got down to two hornets. Scientists had tried gluing on radio trackers, but they didn't work.

So they strapped on the radio trackers with dental floss this time.

Still there are only two hornets left for tracking.

"The other flew to a tree, hung out there for awhile," said Chris Looney of the WSDA entomology lab  Eventually to get her down we used more jelly. This time she flew in the other direction we didn't expect the nest to be."

"We walked through the woods with radio signals and it got stronger and stronger until we found ourselves standing in front of a hornet nest."

Scientists wound up wrapping the tree in plastic and vacuuming out the nest. They used red lights, not regular white lights.

"If you use white lights, it aggravates them and they will come attack you," Shashy said.

They can sting through a regular beekeeper suit.

"They can actually spray venom through their stinger and that can damage the retinas of your eye," Shashy said.

Plus, they are known to kill in some Asian countries.

Dr. Shashy will continue her citizen scientist work and hang more traps because WSDA entomologists believe there are possibly three other nests still in the area of Washington State or British Columbia, Canada.