Today marks the 12-year anniversary of the Miracle on the Hudson and now, more than ever, Captain Sully is calling for unity. 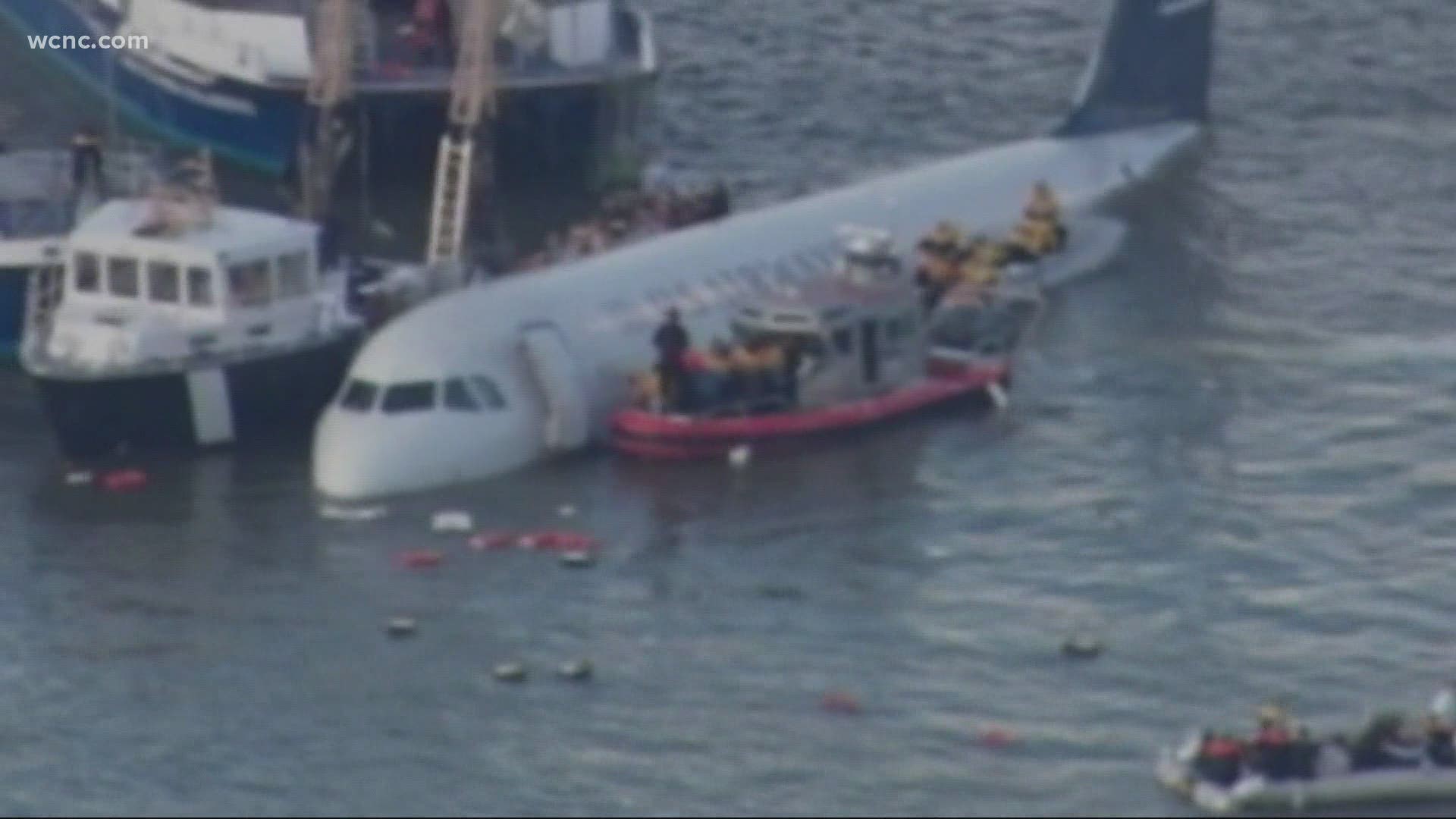 CHARLOTTE, N.C. — On January 15, Flight 1549 on its way from New York City's LaGuardia Airport to Charlotte, North Carolina, struck a flock of geese, forcing the plane to make an emergency landing in the icy Hudson River.

Captain Chesley "Sully" Sullenberger, quickly determining he could not reach LaGuardia, piloted the plane to a safe landing into the Hudson River. Thanks to his heroic actions, all 155 people on board survived.

Last Sunday, Captain Sully tweeted ahead of the 12-year anniversary of the Miracle on the Hudson, calling for unity.

"It was a day when unforeseen crisis impacted the lives of many & forced passengers, crew members & first responders to overcome the unknown by doing one thing: working together," Capt. Sully tweeted.

Captain Sully said working together was the only way he, his crew and his passengers survived that fateful day. He said he's constantly reminded of that fact now more than ever.

Credit: Getty Images
NEW YORK, NY - JANUARY 15: Chesley "Sully" Sullenberger (C), a retired airline captain famous for landing a commercial jet on the Hudson River, celebrates the five year anniversary of "The Miracle on the Hudson" at a press conference and photo opportunity on January 15, 2014 in New York City. On January 15, 2009, Sullenberger took off from La Guardia airport while piloting US Airways Flight 1549 with 150 passengers and five crew members. The plane hit a goose shortly after take off, forcing Sullenberger to land the plane in the Hudson River; no one was killed. (Photo by Andrew Burton/Getty Images)

"This is something I have been reminded of often over the past several months, and especially in recent days as we’ve witnessed the extreme effects of polarization within our country come to an unimaginable peak," Capt. Sully said reflecting on our current political climate.

As our world is consumed by global pandemics, racial injustices and the recent insurrection in our nation’s Capitol, Capt. Sully said now is the time to unify as one community and work together.

"Crisis--regardless of the form it takes--impacts each person differently," Capt. Sully said. "I want to be a resource for those who are seeking tools and guidance. I’d like to understand what questions, challenges or general thoughts others have about managing crisis during these times."

1/7 It’s hard to believe that this Friday, January 15, will mark the 12th anniversary of #Flight1549. It was a day when unforeseen crisis impacted the lives of many & forced passengers, crew members & first responders to overcome the unknown by doing one thing: working together. pic.twitter.com/3AtZmvpWAM

If the Miracle on the Hudson taught us anything, perhaps it's that crisis can bring people closer together. The 155 people that were aboard the flight share a bond that has made them more like family. They have reunions as often as possible and never forget Flight 1549.

Just two years ago, Miracle on the Hudson survivors gathered in Charlotte for the 10th anniversary.

RELATED: Miracle on the Hudson survivors gather in Charlotte for 10th anniversary

“It’s a second family, it really is,” said Barry Leonard two years ago during the flight reunion.

Many survivors of that landing took a commemorative flight from LaGuardia Airport to Charlotte Douglas International Airport, sitting in their original seat assignments and toasting at the moment of impact at 3:31 p.m.

“It kind of brought back so many memories of 10 years ago,” said Eric Stevenson, a survivor on the flight. “But it was also emotional because we had friends and family, and we were together and we could celebrate.”

Credit: WCNC
Five passengers from Flight 1549, also known as the Miracle on the Hudson, gathered Saturday to say goodbye to their aircraft before a temporary closure of the Carolina's Aviation Museum.

At the luncheon two years ago, several spoke on what the miracle meant to them. Then, in a panel, Captain Sullenberger reminded the audience that nobody had ever trained for a flight such as that.

The only training he received for a water landing was reading a few pages in a manual and having a classroom discussion, he said.

At 3:31 p.m., passengers toasted to the exact time they all braced for impact more than a decade ago.

"I'm just so grateful to be alive, to have this gift of life," Diane Higgins said.

Back on July 14, 2019, the "Miracle on the Hudson" was moved to storage at the original Charlotte Douglas airport hangar.

US Airways Flight 1549 had been the centerpiece of the Carolinas Aviation Museum's collection since 2011.

RELATED: 'Brace for impact:' Remembering the Miracle on the Hudson