Ralph Ellis gave $16,000 to a contractor who never did the work. Months passed. After a Defenders investigation, several folks offered help. 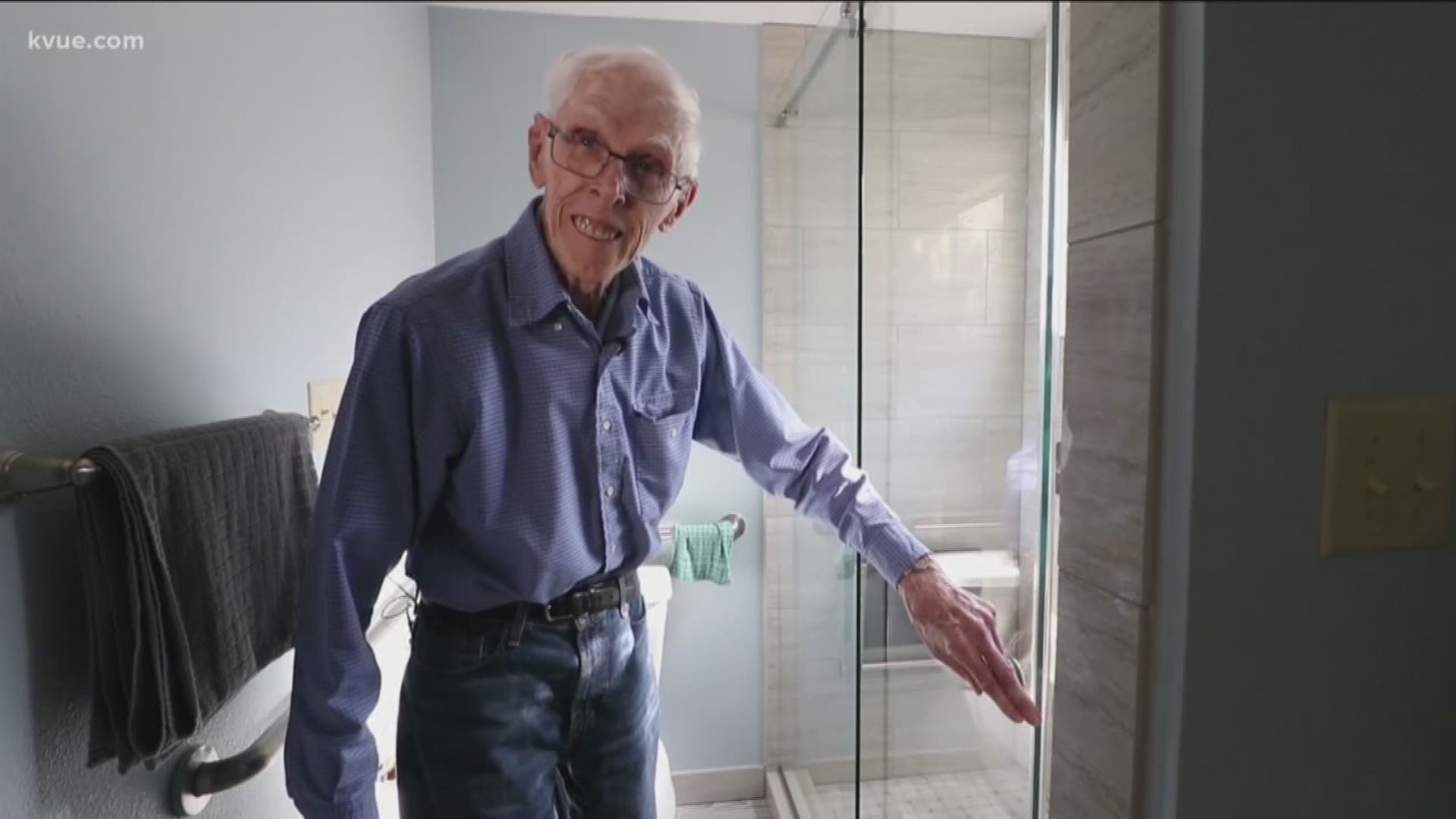 GEORGETOWN, Texas — Any word you use – rebuild, restore, modify, renovate – wouldn’t be enough to describe the love poured into Ralph Ellis's home.

Ellis is a 93-year-old World War II veteran. He paid $16,000 to 1 Day Bath of Texas to make his bathroom handicap accessible.

The contractor, Donald Bockman, never did the work. So, the family called the KVUE Defenders.

After the first story aired, many people offered help, including Gary Henley, the owner of Henley Homes and a board member for Operation Finally Home, which builds and modifies homes for veterans.

“We have had people step up who have seen the news programs you put out,” Henley said.

Henley became the organizer for all the volunteers.

“The floor will be low so Mr. Ellis can get in and out with ease,” said Paul Raley, owner of Raley Design Build.

Raley volunteered his time to build the shower. The material was donated by Lowe’s Home Improvement.

'I'm 93. How much longer do I have to live?' WWII veteran out $16K for abandoned bathroom safety construction project

“Cool, isn’t it? This is my pride and joy,” Ellis said as he opened the door to his new shower.

He pointed out the seat built into the wall.

“That way, if you lose your balance, you got bars,” Ellis said as he gave KVUE a tour.

The renovations went beyond the bathroom. A barn door gives the bathroom area privacy. The bedroom has new ceiling fans. Carpet was replaced with new flooring.  Walls through much of the home got painted. Installed lights brightened the living room.

The kitchen has a fully stocked pantry, thanks to H-E-B.

And the work didn’t stop at the doorstep.

“I’m so proud of what the Georgetown Police Department was able to do,” Henley said.

Georgetown Police investigated Bockman, and the family was reimbursed.

They donated the money to Operation Finally Home.

“I want to make sure we pay it forward to someone else, so they have the experience that we had,” Ralph Ellis, Jr. said.

RELATED: Local veteran who lost $16K to a contractor got a trip to Washington, D.C.

So, this was more than rebuild, more than a restore, more than a modification. Ralph Ellis got more. He experienced a community coming together to support another.

“What a nice job they’ve done with my home … I’m just flabbergasted. I feel like a celebrity,” Ellis said.

The Defenders reached back out to Bockman, the contractor who didn’t do the work. He wouldn’t give an interview or statement.

Lilly Bockman, the person who registered 1 Day Bath of Texas as an assumed name under her sole proprietorship, emailed KVUE this:

“My name is Lillie Bockman and I am the 72 year old, disabled owner of 1 Day Bath of Texas. After our company spent several thousand dollars in supplies, overhead and employee time, Lisa Elis [sic] (Ralph Ellis’s daughter) breached the contract and rejected our attempts to complete the project. My small business suffered a large financial loss because of their violation of the contract. 1 Day Bath has many happy customers and it is a shame that KVUE has misrepresented many facts and given a platform to one unhappy customer.”

The Ellis family said they did not breach the contract.

'We have no reason to believe' missing Austin mother, baby are harmed: Police