'Pickle' was rescued through the quick actions of a Brazoria County sheriff deputy after being found in Angleton, Texas. 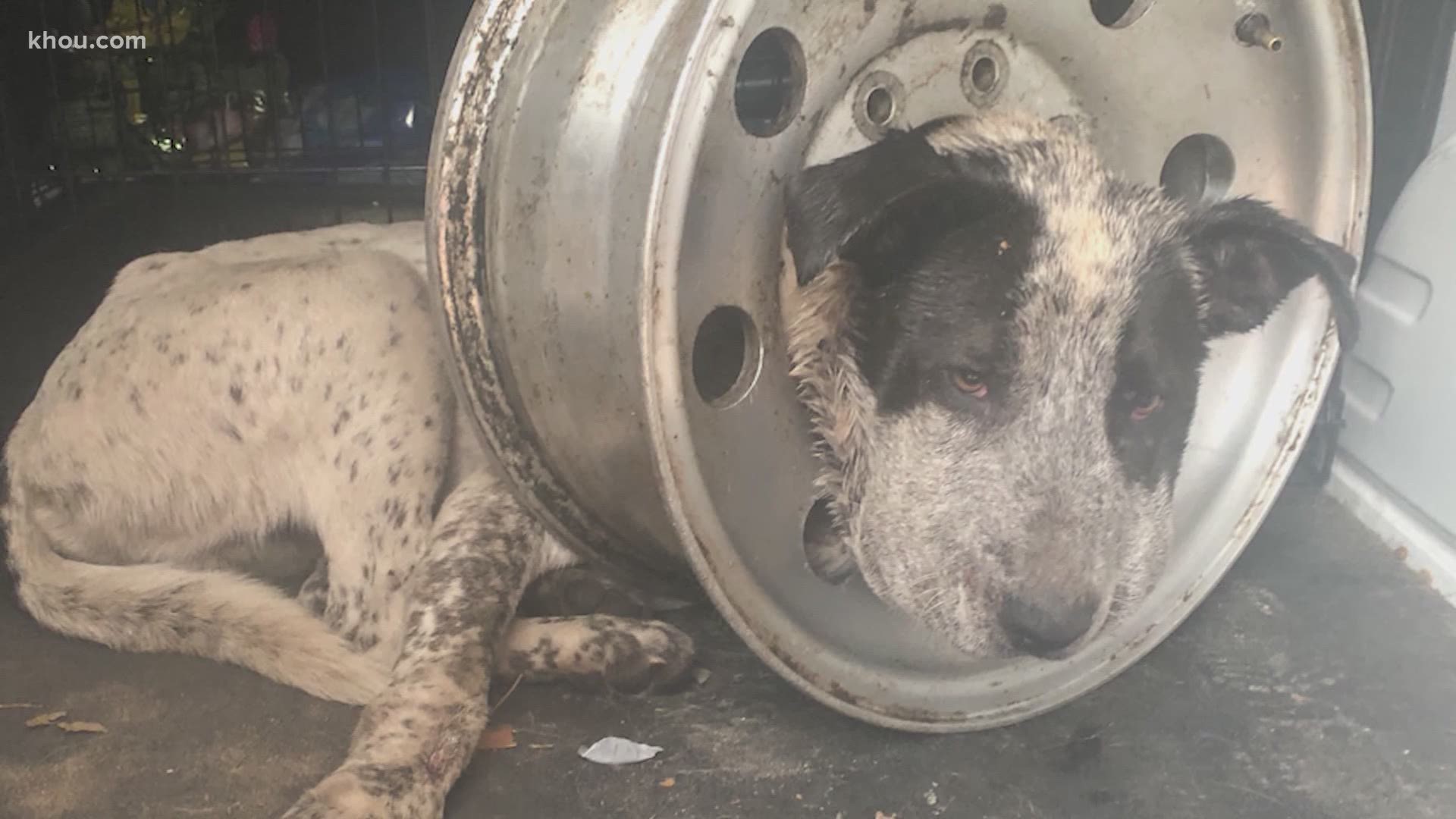 BRAZORIA COUNTY, Texas — A local dog — who rescuers have named 'Pickle' — is resting comfortably after his head was stuck inside a tire rim for five days in Brazoria County, Texas.

His rescue took a fast-acting sheriff's deputy, a dedicated team of veterinarians, firefighters and the jaws of life.

It all started Wednesday in the area near the old rodeo arena in Angleton, Texas.

It's still unclear how the dog became stuck, but a man had been caring for the dog as struggled to free it from the tire rim. He fed Pickle water and chicken broth as he used oils and other methods to try and safely free the animal.

However, the situation became dire Wednesday and he called Brazoria County Sheriff's Office Sgt. Kelly Russell, who works with a local rescue group in her spare time, for assistance.

"I don’t think anybody purposely did that. But the poor guy couldn’t get him out. You can see where he did some oil and some homemade remedies around the poor dog, Russell said.

Rescuers said Pickle could have died from suffocation. He was already found in pain and suffering from a swollen head.

Firefighters use the 'Jaws of Life' to remove a tire rim from a dog!

The pup, named Pickle by rescuers in Brazoria Co., got its head stuck in the rim. Head then swelled.

This is a first for firefighters, the dog rescue group and the vet staff.

Russell was able to get the dog to the Sienna at Six Veterinary Hospital before they closed. It was tough for veterinarians to pull him from the hubcap, so the animal was sedated and Missouri City firefighters were called in to help.

Three Little Pitties All Breed Rescue said he still has some swelling in his face and is a bit unnerved by the medical cone he has to wear, but he is resting comfortably and healing. They added that his vitals are good and there were no open wounds around his neck.

"We’ll get him an appointment and we’ll get him fixed, his rabies, his vaccinations. We’ll do the whole nine yards. And then he’ll get adopted," Russell said.

He is expected to be hospitalized until Monday, then he will be given to a foster family until a safe permanent home is found for him.

Rescuers said they decided to name the dog "Pickle" since he had gotten himself into a "pickle." Russell said the dog is about a year and a half old.

The rescue group will be caring for him and will accept any donations toward his care.

It's a nice little Christmastime miracle!