With the stands packed with family, friends and fellow students, a blindfolded, Keannu wheeled into a black box on the football field and equipped with a virtual reality headset. 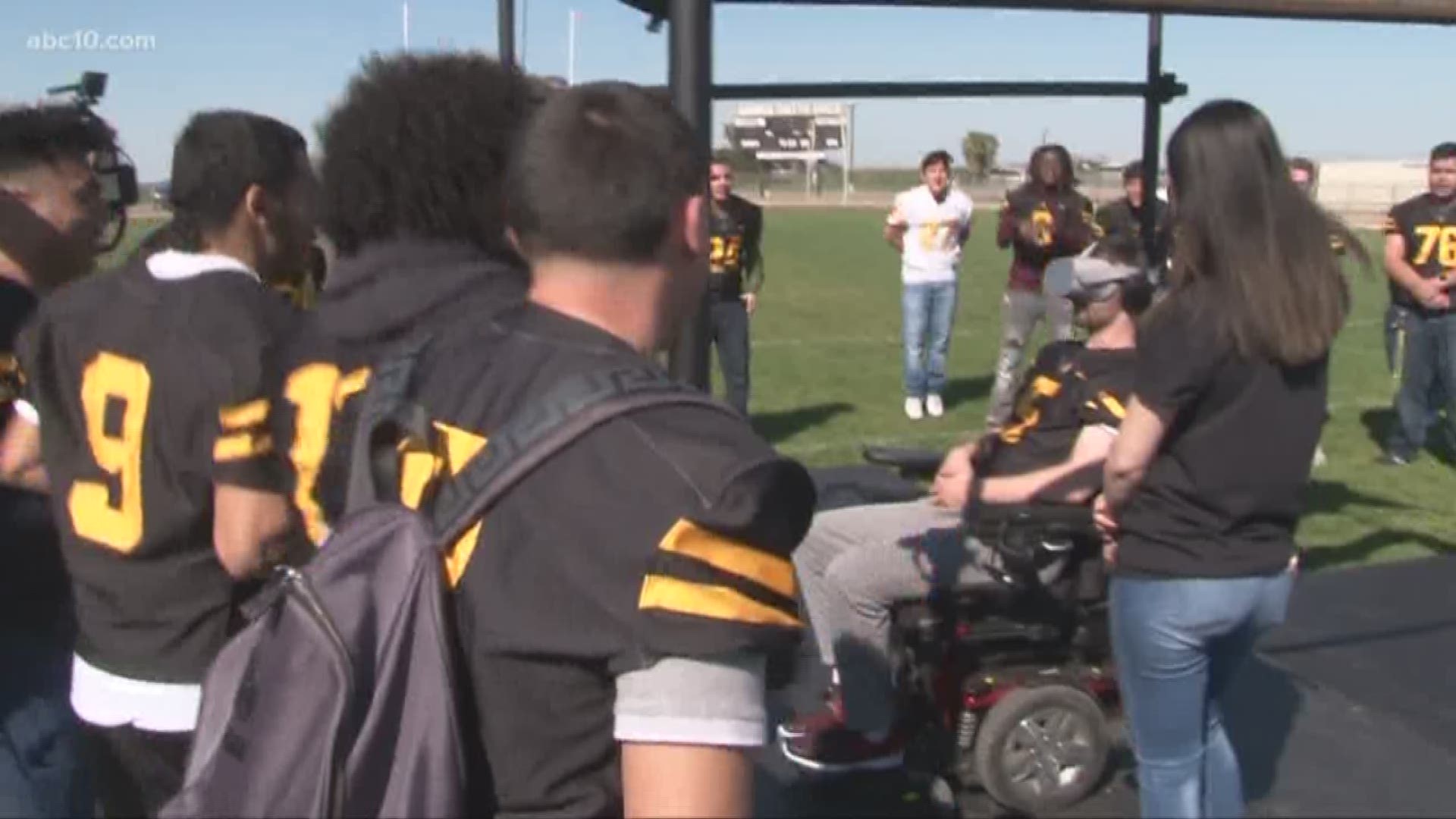 LATHROP, Calif. — In his wheelchair, flanked by teammates, 17-year-old Keannu Linnell returned to the football field at Lathrop High School.

"Keanuu was diagnosed with an aggressive form of brain cancer back in his sophomore year when he was just ready to move up to the varsity football team," said Jennifer Stolo, CEO of the Northeastern & Central California and Northern Nevada Make-A-Wish chapter. "He has been the star quarterback. And so this has been a really difficult time for his family and his friends."

Specifically, Linnell was diagnosed with a Germ Cell Tumor. During surgery to remove fluid from the brain, he suffered a stroke. A two-week course of chemotherapy and another surgery removed the tumor. But, he did not wake up from a coma for several weeks and suffered short term memory loss.

Last year, he was referred to Make-A-Wish and made it known his wish was to play football with his team again. And on Friday, he got that wish in a surprise.

With the stands packed with family, friends and fellow students, a blindfolded, Keannu was wheeled into a black box on the football field and equipped with a virtual reality headset.

He had no idea his teammates were right there with him in person, along with the crowd in the stands. All were told to be quiet until given the signal to cheer.

Last weekend, his teammates recorded a football game where Keannu could be part of the action with the help of an international-based virtual reality production company.

Emerge XR used specialized 360 cameras and microphones to make the game come to life. What Linnell watched, the crowd could also see through two large screens setup on the field.

"We would normally take months to shoot and edit a project like this. We turned this whole thing around in two weeks," said Dave Walsh, Founder of Emerge XR based in Vancouver and Los Angeles.

And, what Keannu didn't know at the end of the 7-minute virtual reality game? His teammates on screen were with him in person along with the cheering crowd he watched on his headsets when he made the winning score.

His teammates then mobbed him after chanting his nickname, "Na Nu!" over and over again.

"I just want to say this, for as long as I'm here nobody else is going to wear the number 5 jersey," said Linnell's football coach Joe Pirillo, presenting Linnell with a white #5 jersey.

He also received a commemorative plaque from Lathrop Mayor Sonny Dhaliwal. His proud parents, Alec and Yesenia Linnell, were on hand to enjoy their son's moment in the sun.

"In our mind, we're always thinking positive. If anything for him. We know it's going to be good," said Yesinia Linnell.

"He's a great kid, 3-sport athlete, 3.8 GPA. He comes from a wonderful, community-oriented family. Two older brothers and older sisters that came to Lathrop High School. This has kind of affected the entire community. So what you see today is the community showing up to honor Keannu," said Lathrop High School principal Greg Leland.

"Thank you people of all ages," said Linnell, surrounded by family and teammates.

With the help of Make-A-Wish, London, who's currently battling a heart condition, was transformed into a Ghostbuster to help save Old Sacramento from spooky creatures.