Shutting down half a street in Tracy for an experimental restaurant "streatery" is a bold move. It might work, and it might not. But some say they still have to try. 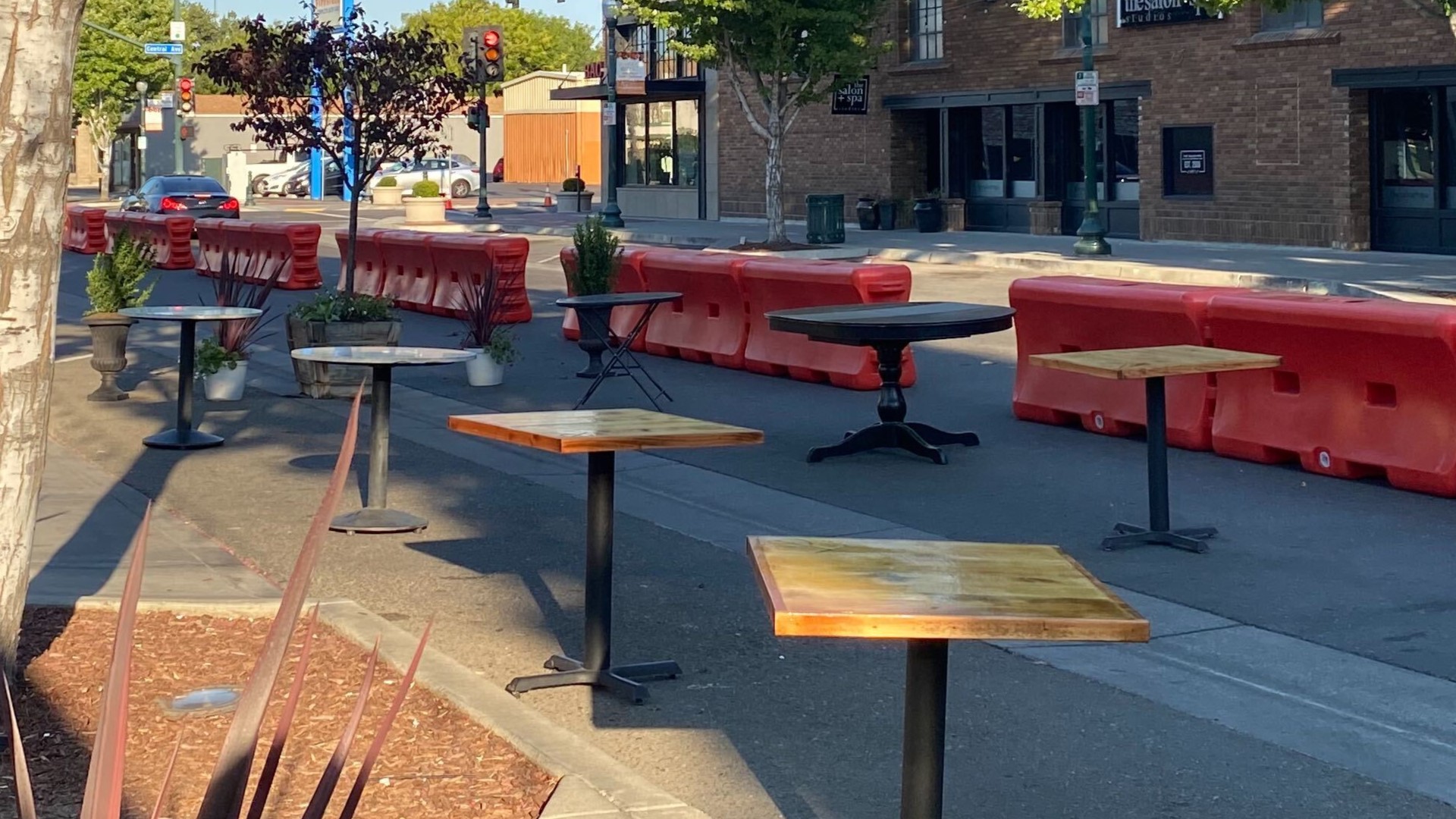 TRACY, Calif. — The dine-in experience will be getting served up outdoors in downtown Tracy.

In an effort to keep their businesses afloat, the Tracy City Center Association (TCCA) is shutting down a portion of 10th Street in downtown to bring in distinct dining areas for restaurants.

The plan is to barricade westbound 10th Street between Central Avenue and B Street. Each of the 15 restaurants expected to participate will have their own defined area, separated from the other restaurants by fencing, plants, or some other kind of divider.

Dino Margaros, TCCA executive director, said you should expect to meet your host or hostess outside and be seated in a socially distanced manner.

“It’s not going to be a street party, let’s put it that way," he said. "It’s going to be defined areas for every restaurant like a patio so that there’s a separation and a control of that area by each individual restaurant.”

Johnnie Oh, owner of The|COMMONS gastropub on 10th Street, has been tied to project from the beginning as the board president of the TCCA and as one of the restaurants set to participate in the project.

He closed his restaurant temporarily on July 1 after dine-in operations were rolled back in San Joaquin County.

Normally, he'd have seating for 49 guests, but adhering to social distancing guidelines cut that to 22. With outdoor dining only, it drops even further.

“It really just wouldn’t pencil out with us just having the seven seats on our patio, potentially another 8 in a parklet,” Oh said about his decision to close the restaurant.

However, THE|COMMONS is making plans for a comeback with the new "streatery." He said the project ups his dining capacity to between 35 and 45 people with adherence to safety guidelines.

Those results are part of the goal of the "streatery." The TCCA is hoping to keep businesses in downtown Tracy alive after the area's economic build came to a stall due to the coronavirus and related closures.

“And what was once a robust downtown, now everybody’s staying at home," said Tracy Mayor Robert Rickman. "There’s nobody down there. There’s very few people down there.”

He said the downtown area was bustling before the coronavirus pandemic but, in the aftermath, there's been a drastic decrease in traffic. Rickman said people were hopeful when the restrictions got rolled back, but after those restrictions returned, he's hoping the "streatery" can help bring some hope for normalcy back.

“If you’ve seen our downtown..., the businesses that we have down there – most of them are mom and pop shops and family-owned businesses. And these families are struggling,” he said.

Margaros said those businesses have treated downtown well over the years with boosts in sales taxes and growth in the past decade.

Like many others, Margaros doesn't see the restrictions and problems in the county going away any time soon.

"I think we know in our hearts this isn’t going to be a three-week thing, given the numbers in the county… we see this being a multi-month thing going forward,” he said.

While the "streatery" is meant to lend a hand, help itself can be one of the more difficult things to offer with fluctuating restrictions and guidelines.

“One of the frustrating things that has taken place in the last few months with the pandemic is the goal post is always moving," said Rickman. "When there’s sets of standards that you meet and then the goal post moves even further... you’re always trying to play catch-up, and so far, we’re doing a great job at that but it slows the process down.”

He said this moving goal post saw business reopen, hire employees, and buy product for their fridges only to have them close them down again weeks later.

Despite uncertainties, Oh said being gunshy on decisions isn't something the businesses can afford to do.

“It’s just kind of like the leap of faith that we have to have. We’re not going to be able to sustain unless we make these judgment calls,” he said.

Oh said THE|COMMONS will be setting aside anywhere from $8,000 to $12,000 to move their operations outside, meet safety requirements, and create a restaurant-esque ambiance for diners.

He has no guarantee that more changes or restrictions won't come, but he has decided to roll with the punches.

As all parties lean into the new project, Kristin Barrios, district manager for the TCCA, said emphasis is being placed on people doing what they can to keep themselves and others safe.

"We’re really trying to encourage people to do what they should already be doing, but they should still come out and support these businesses because there’s a chance that a lot of small businesses can’t survive this second wind,” she said.

Current times are a challenge for business owners like Oh, but he prefers not to dwell on it.

“To be brutally honest, I’m more like a positive thinker than a negative thinker. I try to find solutions, not reinforce problems,” he said.

The "streatery" project is a hopeful one, and the TCCA is hoping it can move forward without any access troubles for pedestrians and parking. Margaros said safety will be considered before anyone looks at the foot traffic and the sales.