Saguache, Colorado is located off US 285 about three hours from both Denver and Durango. It's a haven for travelers, but also for artists seeking a simpler life. 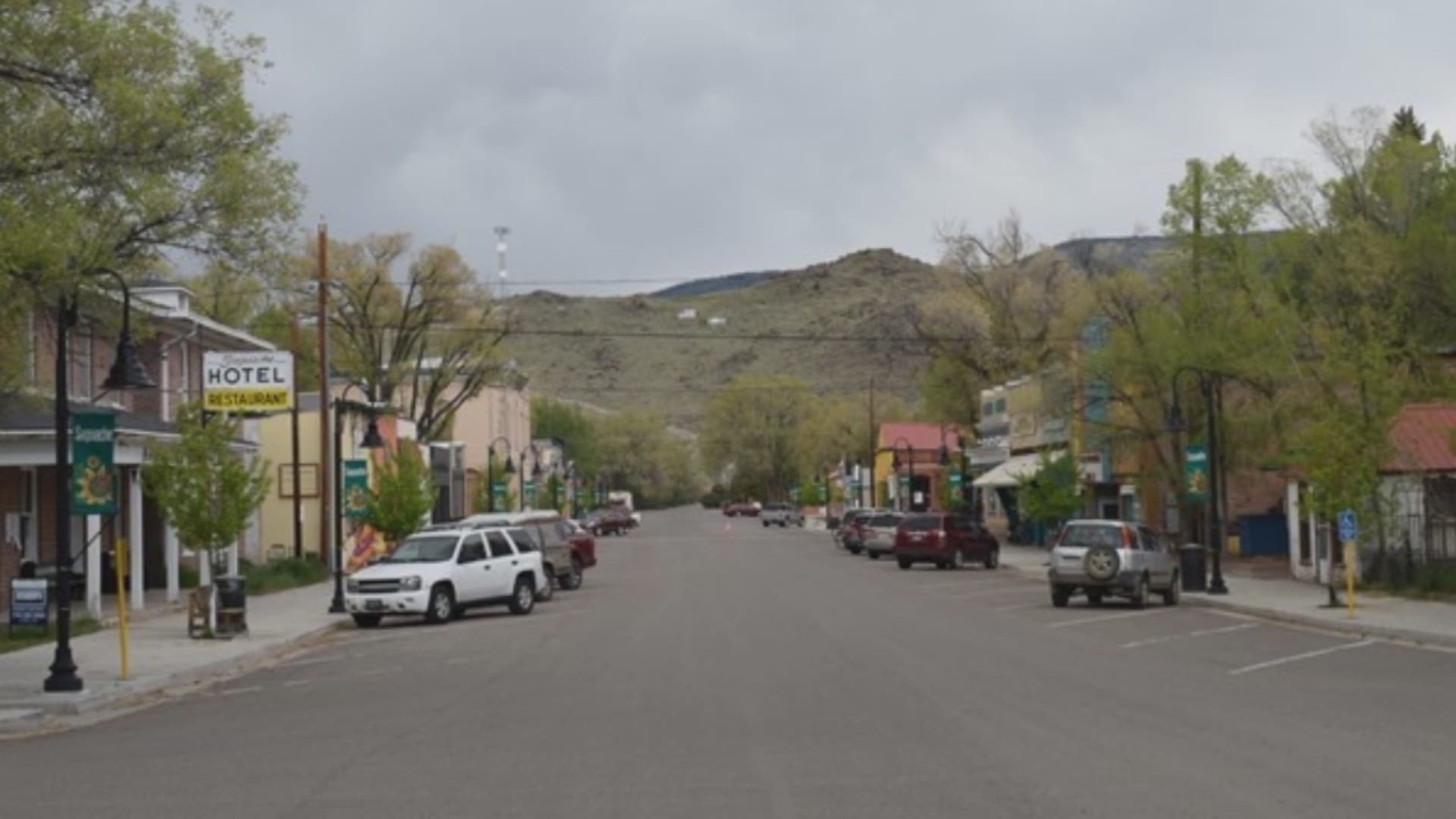 SAGUACHE, Colo. — Mary Morfitt said she isn’t sure exactly how many years she’s volunteered at the Saguache County Museum off US 285 and San Juan Avenue. When you’re 95 years old, those details kind of stop mattering.

During her shift, she answers questions from visitors from all over the world. Most are Coloradans passing from Denver to Durango. Recently, she met Australians with accents so thick Morfitt said she needed clarification that they were actually speaking English.

Regardless of where the travelers are from, Morfitt said they all have the same question.

“First thing they ask is, ‘How do you pronounce the name of this town?’” Morfitt said. “We have to explain it’s kind of an Americanized version of a word in the Ute language.”

Credit: Allison Sylte, KUSA
Mary Morfitt, 95, stands outside of the Saguache County Museum off of US 285.

RELATED: This is how you pronounce confusing names of towns and streets in Colorado

For the record, it’s pronounced “Sa-Watch” – not Sag-u-ah-che like it’s spelled or Saw-Guch like a lot of people pronounce it. It means “water at the blue Earth,” for the creek that begins in the San Juan Mountains and flows through town.

Plenty of travelers flow through the town too, but it also has a habit of making them stay. Heidi Wong is one example.

When Morfitt invited her to check out the town’s Memorial Day parade, she happened to peek inside a door that was ajar in the brightly-colored Ute Theater.

Credit: Allison Sylte, KUSA
The outside of the historic Ute Theatre in Saguache, Colorado.

Wong said  when the previous owner gave her a flashlight tour, she realized she had to have this historic relic on the town’s main stretch.

“Something inside me just screamed out, ‘You have to buy the theater and make this happen!’” Wong said. “That’s how it all started.”

The theater reopens in two weeks, and Wong hopes it will help revitalize a stretch of road in a town of 500 that includes a tiny first-run movie theater, old school diner, for-sale historic hotel and community newspaper.

This story is part of our weekly #9Neighborhoods series. Join us on the 9NEWS Instagram starting at noon on Friday for a photo tour of Saguache. Have an idea for a neighborhood you think we should check out next? Drop me a line at Allison.Sylte@9NEWS.com.

Saguache is about three hours and 15 minutes southwest of Denver by way of US 285, and sits at the north end of the San Luis Valley in one of Colorado’s poorest counties.

It’s been a hub for travelers since the mid-1800s, when Native Americans, Spanish sheepherders, miners and white settlers headed north and west from town every year – many of whom sought passage on the Old Spanish Trail.

Otto Mears, whose name you might recognize as the one behind the “Million Dollar Highway” over Red Mountain Pass, came to Saguache in 1867. He built a mill west of town to supply miners in the nearby camps – leading to a prosperous period for numerous other businesses.

Sheep ranching was also the main economic driver for the town, but that gave way to cattle and alfalfa hay production later on. Now, some of those farmers are switching to cannabis production.

The biggest employer in Saguache is now the local government. The town itself is full of quite a few artists – many of whom came to the area looking for a cheaper and simpler way of life after living in more expensive places like Boulder or even nearby Salida.

“The surroundings … I think they draw people,” said Stacy Amos Holden. She helps organize the Saguache Art Walk, which is happening the same weekend that the Ute Theatre is reopening. “We’re one of the poorest counties in the state, so my hope is, maybe if we develop tourism more, that will be beneficial for the people of the town.

“I don’t know what the answer is, but we need some kind of economic boost. For everybody. Not just for some people.”

Credit: Allison Sylte, KUSA
Saguache resident Caroline Irwin was only supposed to stay in town for five years. She's been there for 17 years and counting, and is part of a local quilting group.

Caroline Irwin, who is part of a quilting group in town that meets once a month, is taking part in the art walk. She and her husband came to Saguache 17 years ago – they were only supposed to stay for five years, but stuck around to renovate a historic home.

Steve Stewart, who’s from Ignacio and wants to go back, is also renovating a historic mansion in Saguache that he calls the nicest in town.

“The sheriff’s after us for impersonating rich people,” he joked.

It’s not the mansion that brought him to town though.

Credit: Allison Sylte, KUSA
Steve Stewart sits outside of the Saguache Hotel, which is up for sale for $275,000.

A few years ago, he bought the shuttered Saguache Hotel off Fourth Street. He was selling antiques there, but had a vision of returning it to its former glory.

“It was built in 1910,” Stewart said. “They built it to be one of the finest hostelries in the area. That was their mission statement when they did it.”

But Stewart’s 70 years old now, and doesn’t quite have the time – or desire to sit at the computer and write grants – to revamp the 100-year-old building. So, it’s on the market for $275,000. For what it’s worth, that’s about how much it would cost to buy a condo in Denver … if you’re lucky.

Credit: Allison Sylte, KUSA
The bottom floor of the Saguache Hotel used to be a bar and restaurant.

Whoever buys the hotel will be right across the street from the Ute Theatre – another place where the owner hopes to return it to its former glory.

Wong said on something of a whim, she found herself the owner of a theatre. That meant getting rid of an asbestos-contaminated coal boiler, 80 seats that had suffered some serious damage over the years, and repainting a building that had its heyday in the 1950s.

The grand reopening is slated for June 21-23, with a performance of “Money Talks: But What the Hell is it Saying?” a two-woman show from Honolulu. The River Arkansas, a Colorado-based Americana band, is also playing.

Wong lives in Crestone, but said she came to fall in love with Saguache after befriending some of the antique dealers in town. She said she sees herself potentially moving there as she continues to develop the theatre. 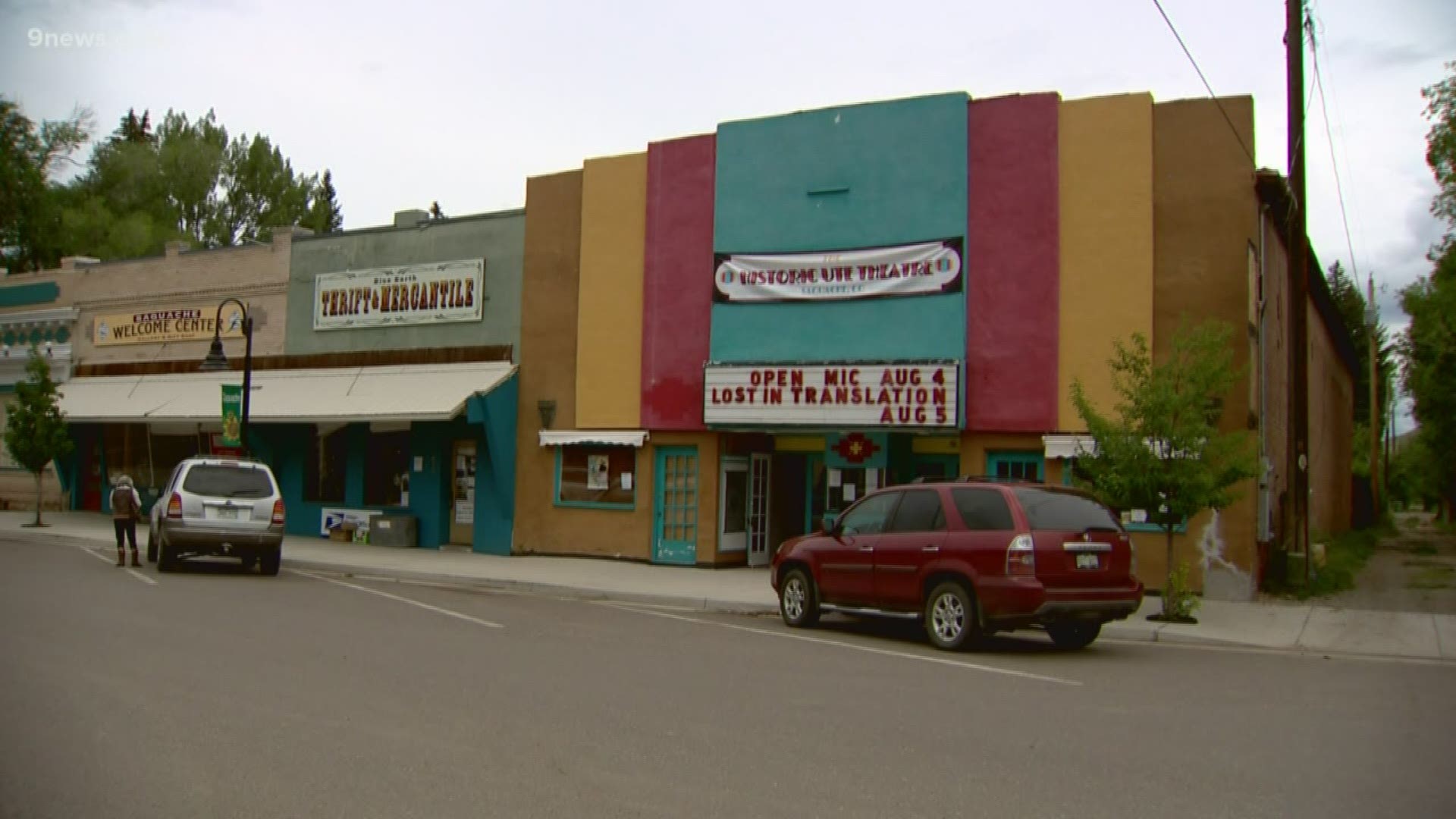 It will be unique in that it won’t sell alcohol and the concessions will largely be healthy, Wong said. She hopes to screen independent and foreign films (so she doesn’t compete with the first-run theater just down the street), as well as have performances from local musicians and even stage game shows.

Making this happen has turned into a full-time job.

“It’s really intense,” she said. “It’s … it’s both exciting and terrifying at the same time, so as I tell some folks who ask me why I did this, you know it’s, for me, it’s sort of a post-divorce, post-empty nest syndrome impulsive decision to do something super fun and exciting and community-building at this stage in my life.

“I just feel like it’s been the right decision because all of the right people have been showing up in my life to support this effort.”

For more information about the theatre's reopening weekend from June 21-23, check out: historicutetheatre.com

More than just a place to get gas

Credit: Allison Sylte, KUSA
Mary Morfitt holds the old jail log for the Saguache County Jail, which is now in the county museum.

Since it’s about three hours from both Durango and Denver, Saguache is a city that quite a few people drive through if they’re headed into southwestern Colorado. It’s also a place that’s worth a stop.

Both the Ute Theatre and for-sale Saguache Hotel are on 4th Street. This stretch is already home to the Saguache 4th Street Diner & Bakery, which is famous for its comfort food and pies.

A few blocks away is the Wapiti Coffeehouse, a cozy gathering place that serves everything from lattes to salads.

Credit: Allison Sylte, KUSA
The outside of the Wapiti Coffeehouse in Saguache, Colorado.

There’s also the Village Pub, which sells pizza and has a bar. Across the street is Saguache Works, a thrift store and local grocery store which has the distinction of being the only place to sell organic, locally-sourced produce for miles.

And nearby is the Saguache Crescent, a community newspaper famous for using an old linotype printing press. It's been in the same family for generations, and the current owner doesn't have an heir.

RELATED: The newspaper that time forgot

Credit: Allison Sylte, KUSA
The outside of the Saguache Crescent in Saguache, Colorado.

Off US 285 is the Saguache Museum, which is home to a replica of the town’s old jail (complete with graffiti from inmates), and tons of artifacts from the gold rush and beyond.

The town is only about an hour from Great Sand Dunes National Park and Preserve which, as of this writing, was experiencing the rare phenomenon known as “surge flow.”

Saguache also isn’t far from Penitente Canyon, which is something of a mecca for rock climbers who want to test themselves against its 100-foot walls.

Hikers can see the Virgin of Guadalupe painted on the canyon walls, and there’s a large network of single-track trails for mountain bikers.

The town’s residents hope that it can attract some of the tourists who stop in towns like Salida and Pagosa Springs, but with a caveat.

“I don’t want it to change too much,” Amos Holden said. “There’s got to be a balance.”