Trade Me Project: Woman working on trading her way up from a bobby pin to a house

At the start of the coronavirus pandemic, a San Francisco Bay Area woman started a project to get a house by trading her way up from a bobby pin. 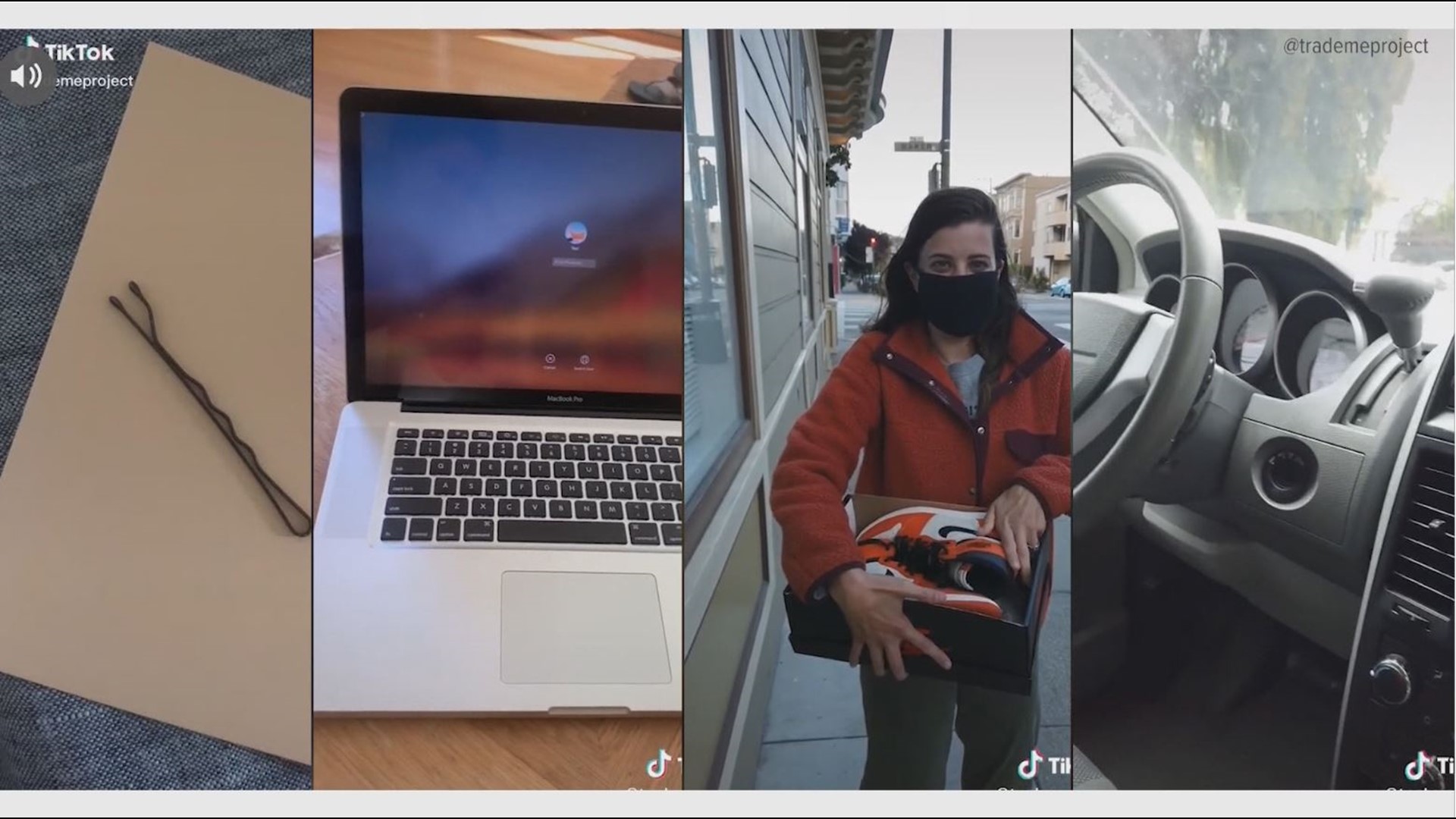 SAN FRANCISCO — A San Francisco Bay Area woman is working on trading her way up from a bobby pin to a house.

She’s been able to trade up from a bobby pin to sneakers, laptops, and cars.

“This idea came about at the start of quarantine so things were quiet,” said Demi Skipper, Trade Me Project. “Nothing going on. I was watching a lot of YouTube, a lot of TikTok and saw this YouTube video. It was actually a TED Talk from a guy named Kyle MacDonald who is from Canada who had done this trading idea 15 years ago.”

Before starting her project she had a couple of rules including no trades to any friends or family and no money involved like investing in improving the item.

“Its been amazing to sort of take money out of the picture and how people value different items and then see the person who trades me and we both think of that’s an incredible deal and works out in my favor and also works out for them too,” Skipper said.

She has several million followers on TikTok but what people don’t see outside her one-minute videos is the thousands of messages she sends.

Since Skipper is in the San Francisco Bay Area she says getting a house there likely won’t happen because of the high cost.

She said the house can be anywhere in the world that’s fully paid off that she can give away.

“For me, since it's more about the journey, I am going to donate the house to somebody,” Skipper said. “I’m hoping to the trade me project family.”

She’s about four months into her journey and she said she’s learned a lot about the kindness of strangers.

It’s also given hope to a lot of people in reaching their goals since it’s something they can do too.

“I think what’s starting to happen is people are thinking about that bobby pin in their house or thinking of that thing you can trade and less about the final house, and I think if you think incrementally, like, 'ok, I’m gonna trade the bobby pin for a pair of earrings. And I’m gonna trade them for margarita glasses or whatever it is,' makes it seem more realistic,” Skipper said.

If you’re interested in getting started know that things won’t always go as planned.

Skipper has been able to double her money through some trades but she also made a big mistake recently on an item that was appraised higher than the retail value. However, she’s not giving up and is determined to get a house in nine months.

Got a personal or business finance question that needs an answer? Let the Dollars and Sense team know by texting us at 916-321-3310.

WATCH MORE: How to get a refund or credit on your travel and theme park season passes | Dollars and Sense