Former Seattle Police Chief Carmen Best talks about her rise to the top, racism she encountered along the way and what led to her departure. 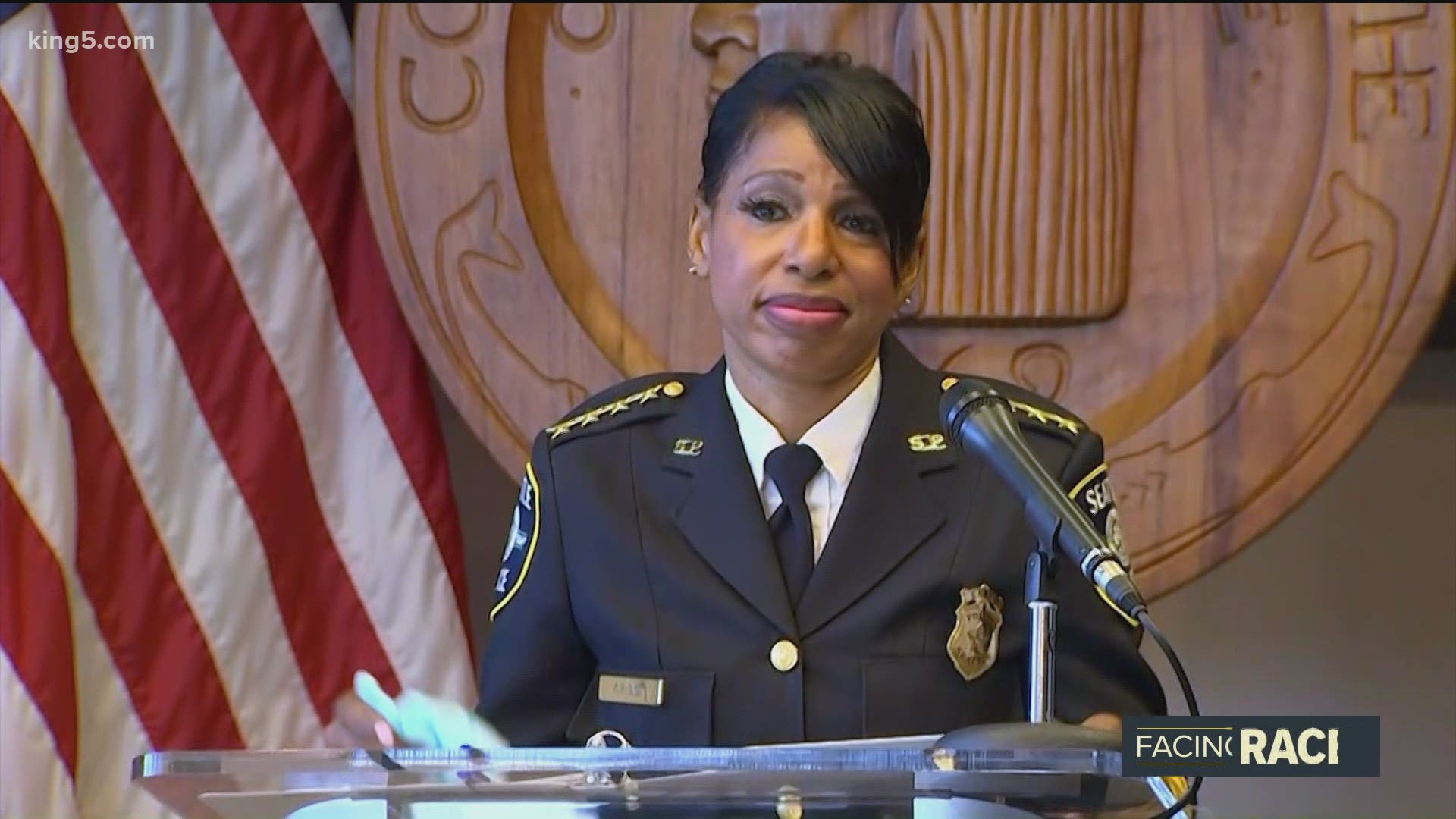 TACOMA, Wash. — Carmen Best was Seattle’s first African American police chief in the department’s 151-year history. Before she stepped down, the department faced major cuts, but the one person left out of the conversation was Best herself.

“The why will always be a question mark for all of us,” Best said. “I think a lot of people have their assumptions as to why, and I can’t answer that for other people. That’s the truth of the matter. But I am gonna highlight the fact that I didn’t see them do that to other people before me who didn’t look like me.”

In May, protests erupted in Seattle against police brutality and systemic racism after Minneapolis police killed George Floyd. Protesters took over six city blocks during the Capitol Hill Organized Protest (CHOP). After Best’s officers were forced to vacate the East Precinct, Best lashed out, saying it “was not my decision.”

Police were called out, criticized for using tear gas and blast balls against demonstrators. As demands to defund the police grew louder, the city council responded voting to slash $4 million from the Seattle police budget, putting 100 officers’ jobs on the chopping block and cutting the chief’s salary by 40%.

After two years in the top job, Best decided she was done. The chief announced her resignation hours after the council passed the sweeping cuts. It was her way, she says, of getting out of the way.

“It was really one of those times where my true conviction was that – it's time to move,” Best said.

During budget talks, Best said she wasn’t part of any city council discussions about department cuts and program changes.

"I do wish I'd known how to be more intentionally supportive of Chief Best in recognition of her extremely difficult position as a Black woman leader in a traditionally male dominated employment sector, while still fulfilling my responsibility as an elected," Herbold said.

However, not bringing Best into the loop was only part of the problem.

Best acknowledged it may be hard for people to not make the assumption of what happened to her was partly about race, but Best said she just doesn’t know for sure.

“I found it very disheartening, the way that they went about singling me out,” Best said.

When asked if Best thought it was the council’s way of putting her in her place, Best said she “absolutely” thought that was some of the intention.

“You know, I challenged their thoughts,” Best said. “I said that I thought some of their decision-making was not inclusive and that it was quite frankly reckless…I honestly just did not want to continue in that vein, to have other people's jobs and lives affected by the mean girl attitude.”

As a Black woman, Carmen Best has some of the same concerns as many people of color. The career officer and former chief has had to warn her family members about how to behave around police. She's given them "the talk," too.

“I've got a big family, so we talk about know your rights, here's what you need to do, here's what you don't have to do when you're getting pulled over,” Best said. “There's a certain way you behave that keeps both you and the officer safe.”

Yet, Best says she has hope things will get better.

Best also believes it's important to learn from the past. It's why she's a believer that Black lives matter.

“The reason why people point out specifically Black lives matter is because African Americans have over the history had a long history of being oppressed and have had, particularly with law enforcement, had law enforcement be a part of that oppression in many ways and used to maintain the status quo,” Best said.

Best hopes the new interim chief, former Deputy Chief Adrian Diaz, will move the department forward, believing she's left her officers in good hands. And with no regrets, she's looking ahead non-committal but not ruling out a return to uniform.

For now, she plans to enjoy her newest role of grandmother, and if there’s one thing she would like to see changed in her grandchild’s lifetime, it’s equity.

This story was produced as part of “Facing Race,” a KING 5 series that examines racism, social justice and racial inequality in the Pacific Northwest. Tune in to KING 5 on Sundays at 9:30 p.m. to watch live and catch up on our coverage here.