LGBTQIA+ Voices: The Coming Out Experience

"Once I came out to myself and started living authentically, then, those were the keys that opened up the rest of my life," said Alexis Sanchez (She/Her). 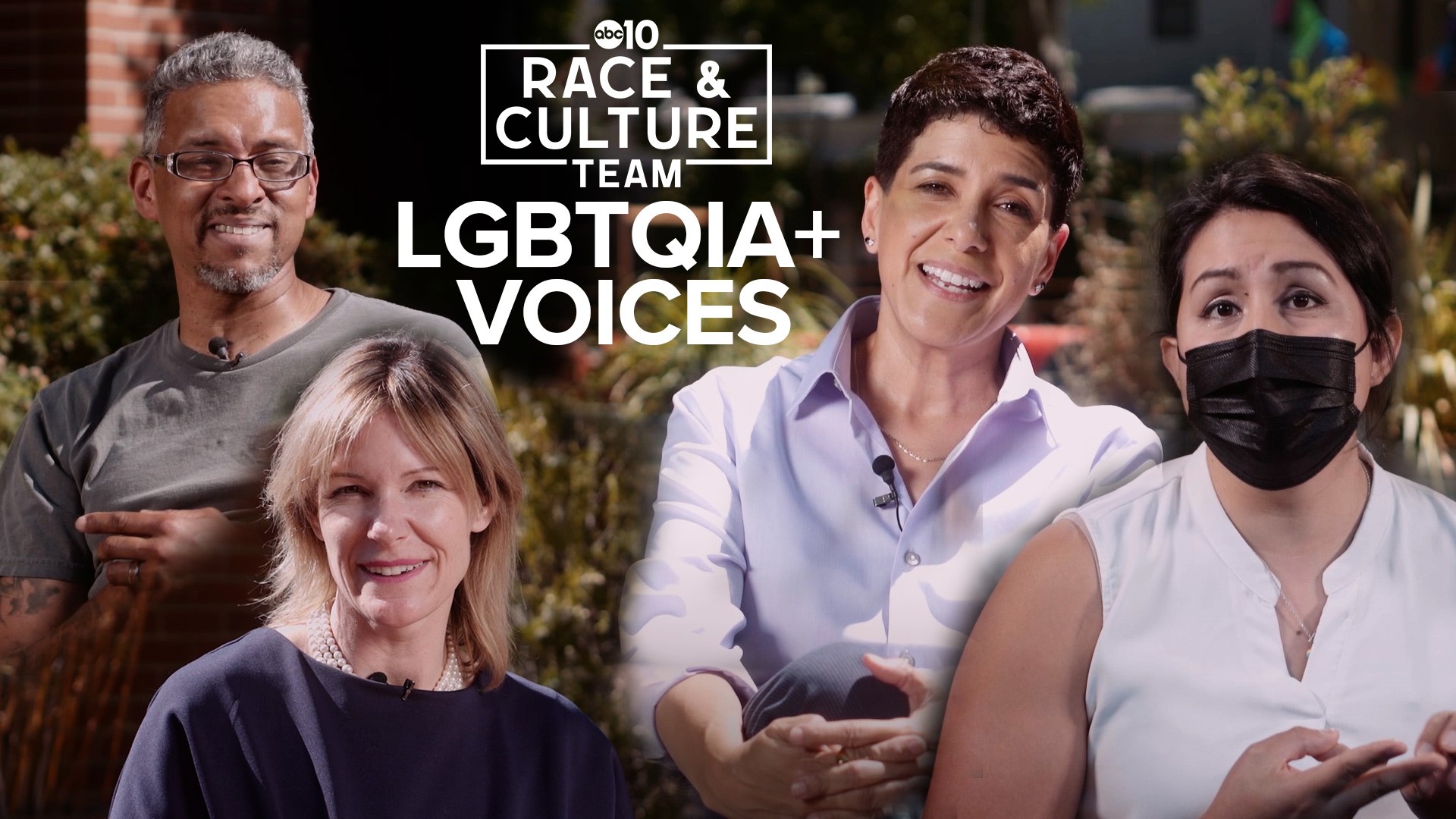 SACRAMENTO, Calif. — "Coming out" is a lifelong process of self-acceptance. That’s according to the Gay and Lesbian Alliance Against Defamation (GLAAD). It’s a nonprofit organization on a mission to tackle tough LGBTQIA+ issues to shape the narrative and provoke dialogue that leads to cultural change. The organization states people forge an LGBTQ identity first to themselves and then they may reveal it to others. However, publicly sharing one's identity may or may not be part of the coming out process.

“I identify as a woman,” said Emily Zelaya (She/Her), board member of PFLAG, Sacramento Chapter. “My sexual orientation is lesbian. The coming out experience is not just a one-time experience. There's also a self-acceptance journey that begins before you even come out. You have to come out to yourself, first, before you can come out to others. I was as young as about five or six years old when I knew I had feelings, attractions, and even a sort of giddiness towards girls. The first person I told was my best friend. I said, 'I'm a lesbian.' And, she said, 'See, that wasn't so bad.”

The latest Gallup poll on lesbian, gay, bisexual or transgender identification shows 5.6% of Americans identify as LGBT. That’s up from 4.5% in Gallup's previous update based on 2017 data. The most recent results are based on more than 15,000 interviews conducted throughout 2020 with adults aged 18 and older. More than half of LGBT adults (54.6%) identify as bisexual.

I came out to my Mom when I was 16 years old. The revolted look on her face sent me running back into the proverbial closet and slamming the door shut. After that, my sexuality became a family secret and it would stay that way for years. pic.twitter.com/frQVqHiCjc

The latest Gallup poll also shows about a quarter (24.5%) of LGBT survey respondents say they’re gay, with 11.7% identifying as lesbian and 11.3% as transgender. An additional 3.3% volunteer another non-heterosexual preference or term to describe their sexual orientation, such as queer or same-gender-loving. Researchers also found women are more likely than men to identify as LGBT. Women are also more likely to identify as bisexual.

“I identify as bisexual,” said Alexis Sanchez (She/Her), Director of Advocacy & Training at Sacramento LGBT Community Center. “I'm also a transgender woman. My gender identity is female, but I was assigned male at birth. When I was born, the doctors looked at my anatomy and said, 'it's a boy.' But, at a very young age, I didn't identify with that. Now, as an adult, I have started presenting and living authentically as a woman.”

Gallup researchers found one of the main reasons LGBT identification has been increasing over time is that younger generations are far more likely to consider themselves to be something other than heterosexual. That includes about one in six adult members of Generation Z, people aged 18 to 23 in 2020. Meanwhile, LGBT identification is lower in each older generation. That includes 2% or less of Americans born before 1965, people aged 56 and older in 2020.

"I'm gay,” said Tyrone Reda-Gonzales (He/They), a Sacramento resident, "A person of color's experience of coming out is often forgotten. It's not a big deal for me to come out because someone's going to hate me by what I look like before they even find out who I'm in bed with. There are also all these different connotations about what it means to be gay and who you're supposed to be. But, no one ever tells you that you're supposed to be just yourself. We all are not great dancers, we all do not ‘snap’ and say, ‘girl,’ and we all don't hate football. We're all different.”

For lesbians, gay men, bisexuals and transgender people, Gallup researchers found, realizing their sexual orientation or gender identity and sharing that information with family and friends is often a gradual process that can unfold over a series of years. Past Gallup data shows the vast majority of LGBT survey respondents (86%) say they have told one or more close friends about their sexual orientation or gender identity. Some (54%) say all or most of the important people in their life know that they are lesbian, gay, bisexual or transgender.

"The first person I had to come out to was myself," Sanchez said. "It took a lot of courage and patience. I waited until I literally could not do it anymore, until 29 years of age. But, once I came out to myself and started living authentically, then, those were the keys that opened up the rest of my life."

"Pride is back at the White House." -@POTUS

Thank you for having PFLAG National Executive Director at today's @WhiteHouse #Pride event, and bringing together so many fighting for equality in this country. 🧡🏳️‍🌈🏳️‍⚧️ #PFLAGProud pic.twitter.com/8Gylc81uSX

WATCH NEXT: The Origins of Pride Month: Remembering the 1969 Stonewall Uprising