Latino or Latinx? The Journey of Self-Identity | Race and Culture

Study: About 1 in 4 people who identify as Hispanic or Latino have heard of the term "Latinx," and just 3% say they use it to describe themselves. 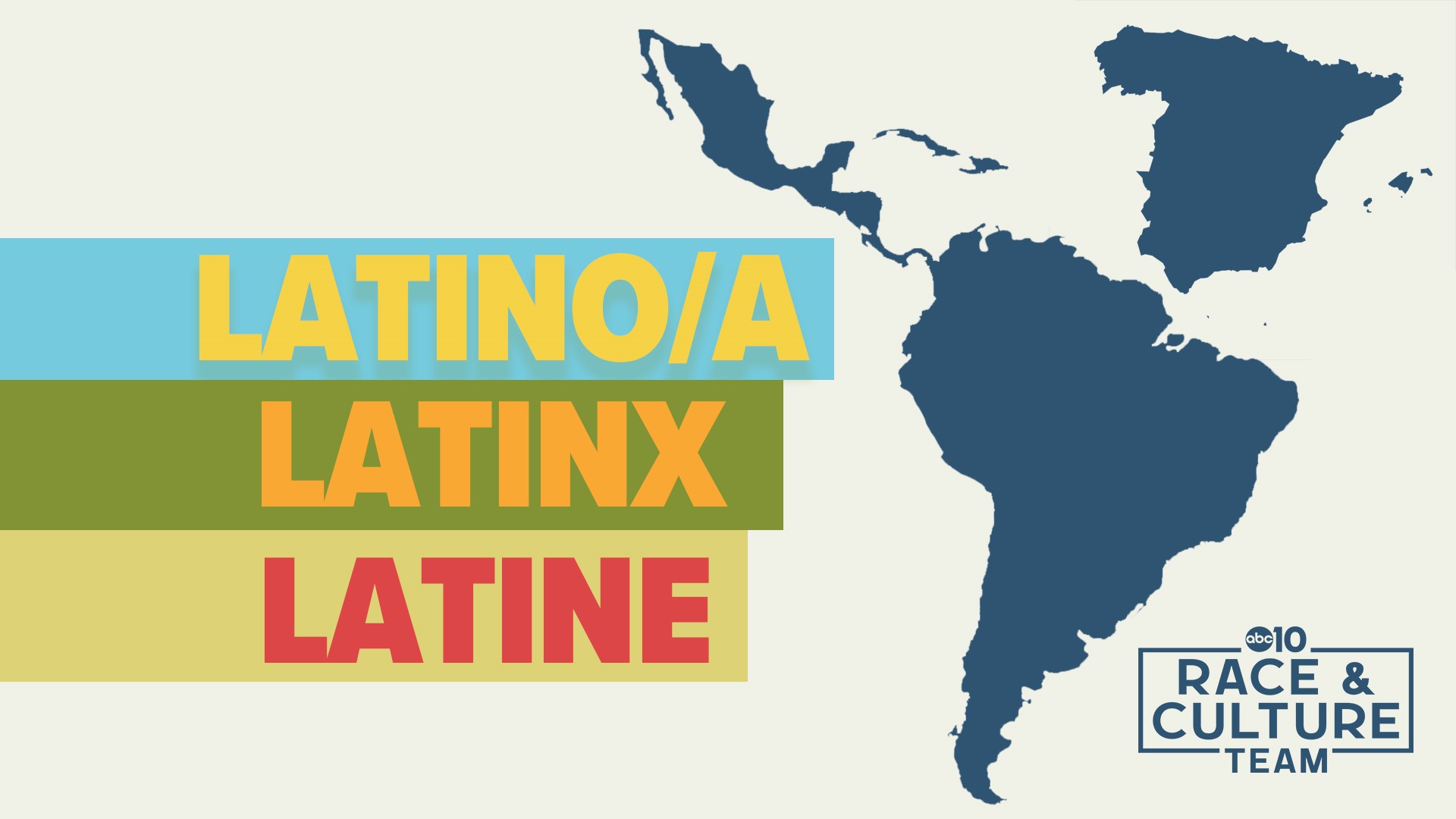 SACRAMENTO, Calif — Throughout the last half-century in the U.S., a number of pan-ethnic labels have been used to describe people who trace their roots to Latin America and Spain. Some of those terms include: Hispanic, Latino/a, Latinx, and Latine.

The U.S. federal government began using the term Hispanic in the 1970s after Mexican Americans and Hispanic organizations lobbied for the government to collect data on the population.

The term Hispanic was first used in a full U.S. census in 1980. In 1990, the census asked people if they were of "Spanish/Hispanic origin or descent" and, if so, to choose "Mexican, Puerto Rican, Cuban, or other Spanish/Hispanic." The term Latino appeared on the census form for the first time in 2000, alongside Hispanic.

According to the 2020 U.S. Census Bureau population estimate, there are more than 60 million Hispanics and Latinos living in the U.S. That's about 18 percent of the total population. California has the largest Hispanic and Latino population in the country, with more than 15 million people.

WATCH: Latino or Latinx? The journey of self-identity

The terms Hispanic and Latino are often used interchangeably, possibly creating slight confusion. Hispanic usually refers to people with a background in a Spanish-speaking country, while Latino is typically used to identify people from Latin America.

Latinx - or Latine - is another term used for people of Latin American descent. It's noted significantly as an LGBTQIA+ and gender-inclusive alternative to Hispanic and Latino. But, not everyone agrees the term should be used. Some critics say the term Latinx ignores the Spanish language and its gendered form.

"You're either a Latino or a Latina," said Lilly Cortés-Wyatt, a PR and communications professional in Sacramento. "I'm definitely a Latina because I'm from Latin America. My mom is Spanish. My dad is from Mexico. I don't believe the word Latinx is proper at all. It's basically an insult to Spanish language. Our language is Latino, Latina. It's not making a discrimination of anyone. It's just our language."

According to the Pew Research Center, the emergence of Latinx coincides with a global movement to introduce gender-neutral nouns and pronouns into many languages whose grammar has traditionally used male or female constructions. In the U.S., the first uses of Latinx appeared more than a decade ago. It was also added to the English dictionary in 2018, reflecting its greater use.

"I use Latine or Latinx," said Alexis Sanchez, director of advocacy and training at the LGBT Community Center. "My parents were Salvadorian immigrants, so they were the first generation. I'm the child of immigrants. Spanish, like most romance languages, has gendered pronouns. Latino tends to be used as the default, which kind of plays into patriarchal norms and says the male is the default. I am non-binary, and I maybe live between genders. So, these very gendered rigid pronouns don't work for me."

Credit: Pew Research Center
Most Latino adults have not heard of the term Latinx; few use it

"We're always trying to find ways to fit more people under these umbrella terms," Sanchez said. "And, there's always going to be folks that maybe feel a little left out or feel that the term is not representative of who they are. If you don't like the label, you don't have to use it."

Esperanza: A Celebration of Hispanic Heritage and Hope | Race and Culture