The Origins of Pride Month: Remembering the 1969 Stonewall Uprising

"Pride is really about creating a better world for future generations," Sanchez said. "It's a celebration of how far we've come. But, there's still work to be done." 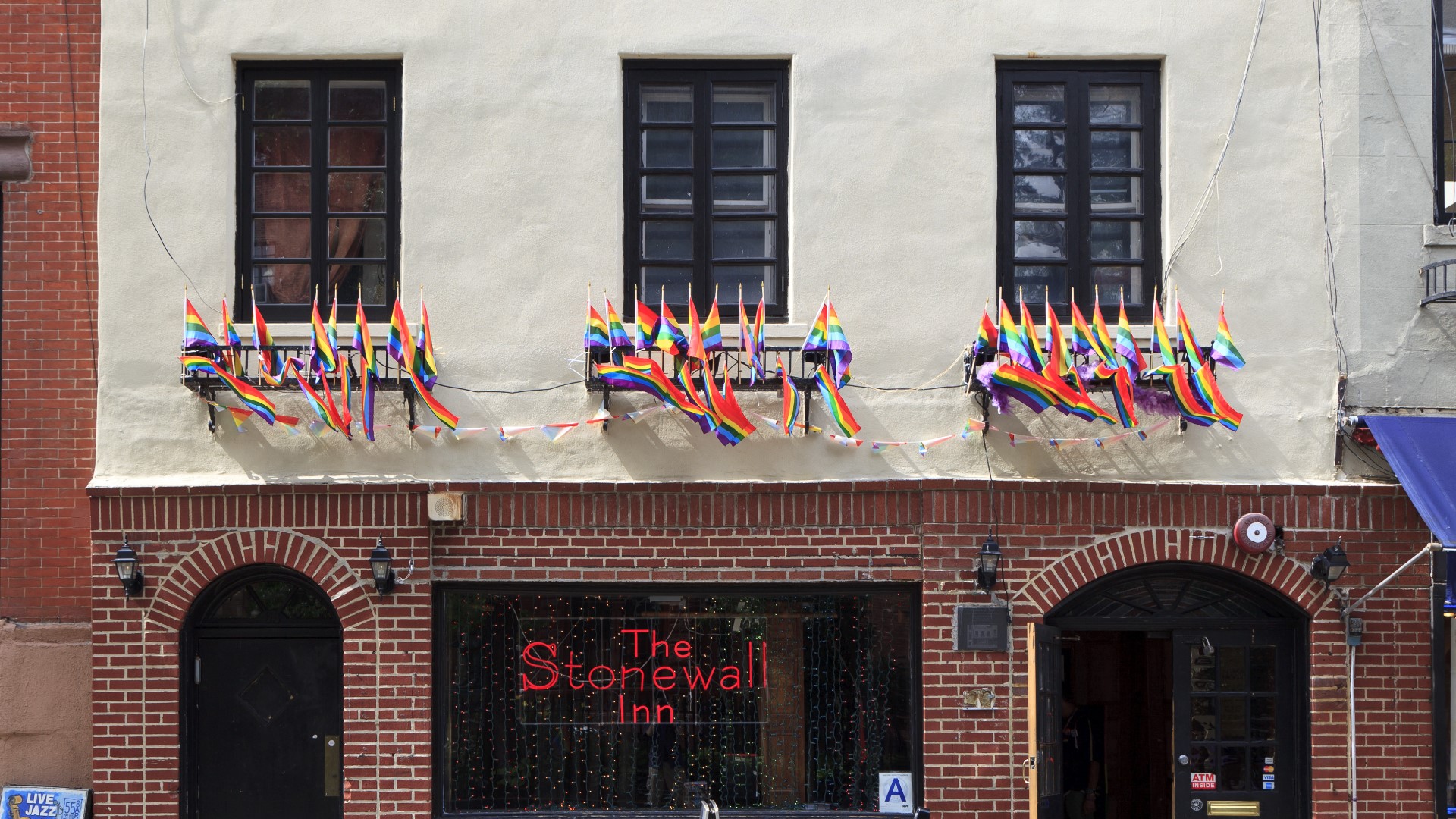 SACRAMENTO, Calif. — Pride month is celebrated each year in June to honor the 1969 Stonewall Uprising, also called the Stonewall riots.

The Library of Congress describes the Stonewall Uprising as “a series of events between police and LGBTQ+ protesters that stretched over six days.”

Even though the Stonewall Uprising is not the first time people in LGBTQIA+ communities fought for equal rights, the event is believed to be a tipping point for the Gay Liberation Movement in the United States.

“It's really the beginning point of the modern gay and lesbian movement,” said Howard Chiang, Associate Professor, Department of History, UC Davis, (He/Him). "LGBTQ individuals have undergone great oppression and invisibility in society. It's not as if there were not other groups talking about gender and sexuality issues. But, it was really the first time people were actually thinking about sexual diversity and the gay and lesbian movement. People believed it was something worth paying sustained attention to.”

Pride is here and we're excited for all the joy we have to share this month. We want to hear, first, what pride means to you. #Pride #Pride2021

Let us know in the replies below using #PFLAGProud 🧡🌈 pic.twitter.com/PFzTlxdMIe

In 1969, the mafia-operated Stonewall Inn was considered one of the most popular gay bars in Greenwich Village, a residential section of Lower Manhattan, in New York City.

Around that time, being gay was illegal in every state except Illinois. It was also illegal to serve alcohol to a gay person throughout the state of New York until 1966. As a result, many gay establishments operated without a proper liquor license, making it easy for police to regularly raid gay bars and other places considered safe havens for people in LGBTQIA+ communities and groups.

"Back in the '60s, there were many laws on the books that criminalized the simple act of existing as a person who was LGBT,” said Alexis Sanchez, Director of Advocacy and Training, Sacramento LGBT Community Center, (She/Her). “And, that manifested itself as over-policing of the community. Oftentimes, law enforcement would come into LGBT bars, arrest the patrons for just being, and harass people. So, in the summer at Stonewall, things kind of came to a boil.”

In the early morning hours on Saturday, June 28, 1969, nine New York City policemen in plainclothes raided the Stonewall Inn. Officers justified the raid with a search warrant, authorizing the police to investigate the illegal sale of alcohol at the bar. It was the third raid on Greenwich Village gay bars in a short period. During the raid, police interrogated and arrested Stonewall employees for selling alcohol without a license. Police also arrested several cross-dressers and at least two drag queens.

In 1969, it was illegal to wear fewer than three items of "gender-inappropriate" clothing in New York. It was informally known as the "three-article rule" or "three-piece law."

According to the Gay and Lesbian Alliance Against Defamation (GLAAD), an organization focused on rewriting the script for LGBTQ acceptance, drag queens are men, typically gay men, who dress like women for the purpose of entertainment. While anyone may wear clothes associated with a different sex, GLAAD defines cross-dressers as, typically, men who occasionally wear clothes, makeup, and accessories culturally associated with women. Those men typically identify as heterosexual. This activity is a form of gender expression and not done for entertainment purposes.

Primary sources available at The Library of Congress detail how the Stonewall turning point came when police tried to put a lesbian in a patrol car. Officers forced the woman into the vehicle after she tried to walk away three times. In response, about 400 people outside of the bar chanted "police brutality" and tossed objects, such as coins and bottles, at law enforcement.

During the unexpected riot, the police requested reinforcement and barricaded themselves inside the bar for safety. According to the Editors of Encyclopedia Britannica, the police barricade was repeatedly breached and someone set the bar on fire. Once additional police arrived at the scene, the fire was extinguished.

“It turned into a whole protest movement," Sanchez said. “All sorts of marginalized groups were fighting for their rights, fighting to be recognized, and fighting to repeal these laws that were on the books that serve to just keep people on the margins.”

Around 4 a.m., the next day, the crowd at Stonewall dispersed. But, by the evening, thousands of people showed up at the bar and in surrounding areas to fight for LGBT rights. The protests continued into the next week, with law enforcement violently clashing with protesters. Over the next several days, LGBT supporters pushed the gay rights movement.

On the one-year anniversary of the Stonewall Uprising, gay rights activists organized the first "Christopher Street Liberation March" and "Gay Pride Week" in New York City to recognize the impact LGBT people had on history locally, nationally, and internationally.

“The police were infringing on our rights, arresting us, and beating us,” said Kay Whistler, President, PFLAG, Sacramento Chapter, (She/Her). “They started the marches in New York to celebrate the fact that they stood up for themselves. Pride is a celebration of all the things the LGBTQ community never had. If we don't learn from the past, then we are going to repeat it.”

About three to five thousand people attended the inaugural Pride march in New York. Activists in other cities including Los Angeles and San Francisco organized Pride celebrations too. The LGBT civil rights movement expanded from national to international attention. In the U.S., the last Sunday in June was initially celebrated as "Gay Pride Day" to recognize LGBT people and history.

Gay Pride Day grew over time to a month-long celebration, including pride parades, picnics, parties, workshops, concerts, and more, nationally and internationally. Memorials are also held during Pride month to remember members of LGBTQIA+ communities who died due to hate crimes or HIV/AIDS.

“Very quickly, the Gay Liberation Movement had a global impact, not only in Europe, but in other parts of the non-Western parts of the world,” Chiang said.

“There, queer activists decided they also needed to organize amongst themselves. And, so, you also see gay pride marches elsewhere. Taiwan is the first state in Asia and the most populous continent in the world to legalize same-sex marriage. Taiwan was also the first country to have Pride marches in the Chinese-speaking world. So, when you think about Chinese communities, Taiwan stands out and LGBTQ activism,” he added.

Today, marchers in New York City number in the millions. Since 1970, LGBTQ+ people have continued to celebrate Pride month in June to fight for equal rights. According to The Library of Congress, a coalition of education-based organizations in the U.S. designated October as LGBT History Month in 1994.

In 1995, a resolution passed by the General Assembly of the National Education Association included LGBT History Month within a list of commemorative months. National Coming Out Day on October 11, as well as the first "March on Washington" in 1979, are commemorated in the LGBTQ community during LGBT History Month. The Stonewall Inn is now recognized as a National Historic Landmark by the National Park Service. The site is considered significant due to its association with events that outstandingly represent the struggle for civil rights in America.

"Pride is really about creating a better world for future generations," Sanchez said. "It's a celebration of how far we've come. But, there's still work to be done. As long as we are having celebrations, we have to make sure that we're still talking about the struggle. Remember, the work isn't done. For Blacks and indigenous people of color who are LGBT and transgender people, there's still assaults happening. There's also still a greater movement for LGBTQIA+ people to have equal recognition under the law and equal access to the same opportunities as everyone else."

WATCH ALSO: How is Sacramento planning to support the LGBTQ+ community during Pride Month?