The legacy of California rice farming at Koda Farms 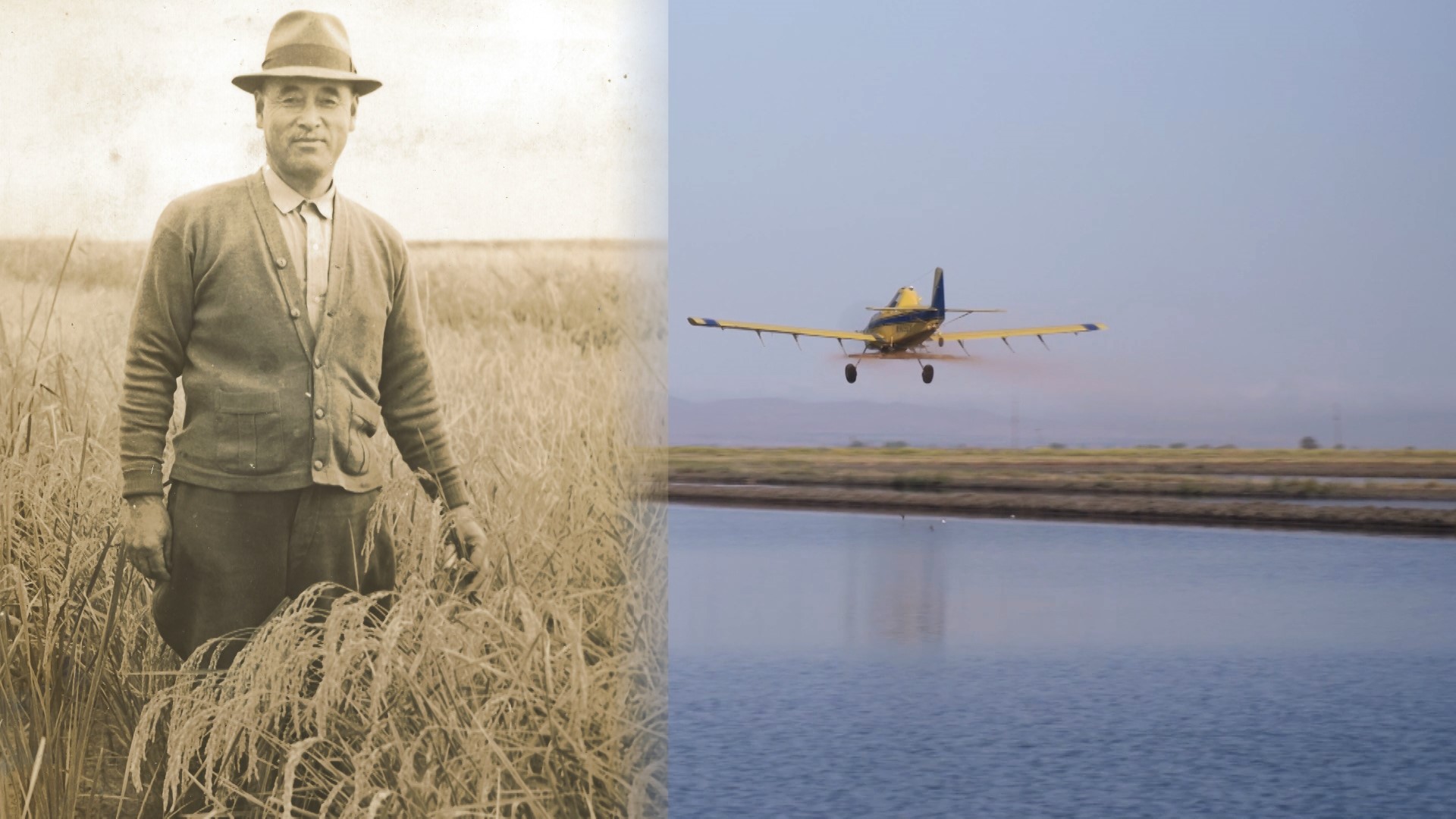 DOS PALOS, Calif. — In the fertile fields of South Dos Palos, a small cloud of dust follows a tractor working the land near the Merced and Fresno county line.

The soil must be prepared in such a way that water can flood the field without any high or low spots. While all this is happening, the roar of a distant plane get closer and closer until at just the right moment, millions of rice seeds are dropped from the belly of the plane.

The time and the technology have changed, but for three generations now, this is how the Koda family has planted their famous brand of Heirloom rice.

“Not sure it chose us, or we chose it. Ha! It’s hard to tell,” Co-owner Ross Koda says.

California is one of the nation’s leading producers of rice. It’s a multi-billion dollar industry that started back in 1912, about the same time Ross Koda’s grandfather Keisaburo Koda “failed his way” into what would become one of the oldest, Japanese family owned rice farms in the state.

“My grandfather used to say, and he told my father, 'you have to fail three times before you can become a success',” Ross said.

An immigrant from Fukushima, Japan, Keisaburo arrived in California in 1908. After failing in the oil fields of Coalinga, he tried his luck in the laundry shop business and then in the vegetable canning industry. Keisaburo’s fourth and most profitable business venture lead him to rice.

“He just had a drive to realize the American dream,” Ross said.

That American dream would not come easy. The Alien Land Law Act of 1913 prevented Keisaburo from purchasing land. So, he had his American-born children start a corporation and buy land for him. Then, the family learned about the difficulties with the soil in Dos Palos.

“For some reason, it was rough and clotty,” Ross said.

An innovator at heart, Keisoburo developed or improved early California rice farming practices and was one of the first to plant rice seeds by plane.

“He actually had his own planes,” Ross said.

Before long, Koda Farms built its own rice processing plant to dry the rice. Business was good, until World War II. In reaction to the attack on Pearl Harbor, President Roosevelt ordered people of Japanese descent to internment camps. The Koda family spent three years incarcerated at a camp in Colorado and were forced to entrust their land and farming equipment to strangers who sold most of it off.

Instead of giving up, the Koda family started over. In the process, the family commissioned plant breeders to develop a special strain of rice specifically for them. It would ultimately be named Kokuho Rose.

“It has a subtle floral flavor with a sweet after note,” Ross said.

Keisaburo would pass the business to his sons Edward and William, so he could focus his energy on improving welfare of Japanese Americans. He launched the People’s Rights Protection Association, which helped end the Alien Land Law Act. Then in the 1950s, Keisaburo became a naturalized citizen and established a program that brought Japanese people to the United States so they could study California agriculture.

“One of my grandfather’s passions was improving and cultivating relations between Japan and the United States because he always thought there was something more," Ross said.

“I think that’s what makes rice so special and that’s why it’s so important to California," Ross said.

This project is a part of our newly developed Race and Culture Team. The mission of the Race and Culture Team is to consistently serve people who have been historically overlooked or underrepresented in the media by amplifying their voices through authentic representation, community engagement and in-depth storytelling on all platforms. If you have other suggestions or members of the community you'd like us to highlight, please send an email to our race and culture team lead, Kandace Redd, at kredd@abc10.com.

WATCH MORE FROM THE RACE AND CULTURE TEAM ON ABC10: