Kenneth Haggerty, 59, was arrested on two charges of aggravated assault with a deadly weapon after the shooting. 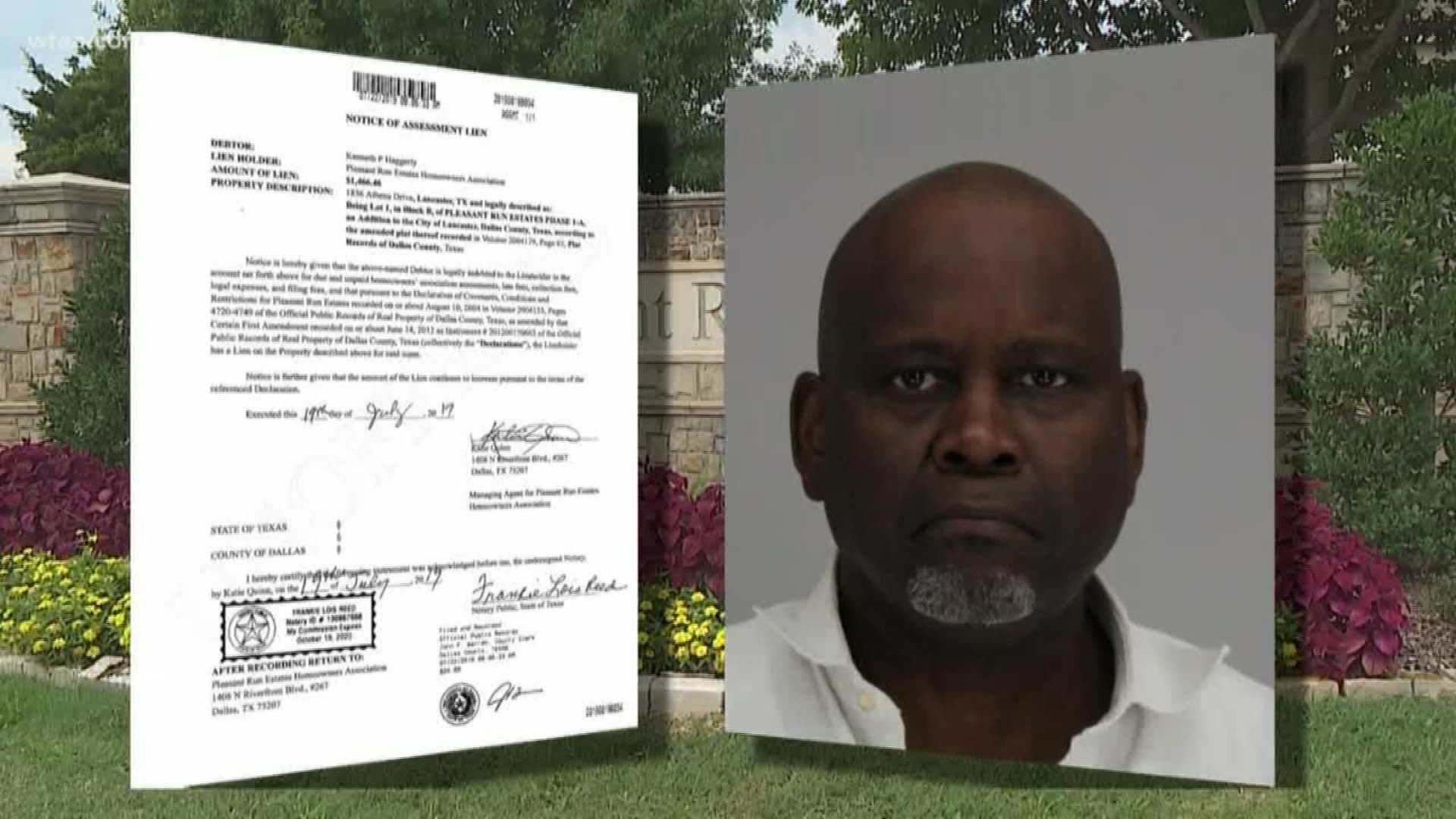 LANCASTER, Texas — After being shot multiple times by a disgruntled neighbor, the wife of a homeowner association president in Lancaster told WFAA that she's recovering and that it's God's will that she survived.

On Aug. 4, police were called around 5 p.m. to the 1000 block of Rawlins Drive in the Pleasant Run Estates neighborhood following the shooting.

That location sits right between the homes of Belinda Tucker and Kenneth Haggerty, neighbors who have been in an apparent feud for years.

The shooting has rocked Lancaster because police believe Haggerty may have shot Tucker because her husband, the HOA president of the neighborhood, placed a lien on Haggerty's home for not paying dues.

Haggerty pulled in front of Tucker while she was in her car with her friend Gloria Garnett, blocking them from going anywhere, per Lancaster Police.

According to arrest documents, Haggerty cut Tucker off because she smiled at him and made him upset.

Credit: Belinda Tucker
Tucker snapped a photo of Haggerty after he blocked her in the street with his car outside their homes.

Once blocked, Tucker told police that Haggerty got out of his car with a pistol and started firing at their vehicle.

Garnett rolled out of the car and ran away, but Tucker told WFAA that she was struck four times while in the car.

Credit: Belinda Tucker
In another photo snapped by Tucker, you see Haggerty approaching her car with a gun in his right hand.

From her home in Lancaster, Tucker said she shielded her face and played dead after being shot.

"He started shooting into the car before he opened my door," Tucker said.

At some point, Tucker's husband Anthony came out into the street armed with a gun.

"When he opened the door, he yelled at my husband, 'You come any closer and I'm going to kill this b***h!' " Tucker said.

According to Lancaster police lieutenant Nate Thompson, Tucker's husband exchanged fire with Haggerty after he shot into Belinda's car.

When police arrived, both men were taken into custody. However, Tucker's husband was later released without being charged.

Thompson said criminal charges may still be filed against him.

"I could hear the hurt in my husband's voice, because he said, 'You killed my wife!' " Tucker said.

Haggerty was charged with two counts of aggravated assault with a deadly weapon.

He was released on bond and cannot have any contact with the Tuckers.

Tucker said she was taken to the hospital after the shooting with injuries to her right hand, arms, and head.

Credit: Belinda Tucker
An x-ray of Tucker's right hand. She said her middle finger was shattered by a bullet.

According to Tucker, she likely has to have surgery on her right hand because her middle finger was shattered by a bullet. She told WFAA that was the hand she shielded her face with.

The Tuckers and Haggertys have quite a history.

In 2015, Tucker filed a criminal stalking complaint against Haggerty and his wife.

The complaint contains multiple logged occasions where the Tuckers said the Haggertys followed them throughout their neighborhood, that they filed false police reports against them, and cyber-stalked them on social media.

The complaint was submitted to the Dallas County District Attorney's Office but an indictment never came.

Now that she's been shot, Tucker told WFAA that she feels no one took her complaints seriously.

"I don't want to be referred to as the Hatfields and the McCoys, I want them to do something about this," Tucker said.

What may have sent Haggerty over the edge involves a lien recently placed on his home by the HOA Tucker's husband is the president of, according to Thompson.

In July, a lien of $1,466 was placed on Haggerty's home by the Pleasant Run Estates Homeowners Association for not paying fees in connection with the organization.

Haggerty isn't the only one who received a lien. As many as 10 in the neighborhood have them for not paying HOA fees.

An HOA was once prevalent in Pleasant Run Estates, but homeowners said that it went dormant years ago when the neighborhood decided to have its property taxes go towards the city's public improvement district (PID).

The PID takes a portion of property taxes from homeowners and beautifies common areas and entrances to the neighborhood.

But around April of this year, homeowners said they started receiving letters from a property management company claiming it was collecting fees on behalf of the Pleasant Run Estates Homeowners Association again.

The HOA is registered with Dallas County, but some homeowners (especially those with liens) are lawyering up and contesting its legitimacy, claiming they didn't agree to be in one.

One homeowner has already sued the Tuckers in small claims court for "extortion, harassment, and fraud," court records show.

Another even parked their truck outside Tucker's home with a large sign to protest the HOA.

A legal expert told WFAA that an HOA often has to be declared defunct by a judge, if not it could be revived.

WFAA is still investigating if the Pleasant Run Estates HOA ever reached that point.

Credit: Belinda Tucker
A photo of the truck protesting outside Tucker's home that says, "DON'T BE DEFRAUDED."

Thompson told WFAA that Lancaster Police has received multiple reports of possible fraud regarding the association. He said investigators are reviewing the HOA's legitimacy.

It's an investigation, however, that Tucker said she and her husband aren't afraid of.

She added that they have nothing to hide and that the HOA never disbanded or went away. She also claims that her husband was rightfully elected president of the organization.

"I welcome it, I welcome an investigation with open arms," Tucker said.

Regardless, Tucker said that all of this could have been settled in court — instead of the street with a gun. "He came after two women, two unarmed women," Tucker said.

WFAA reached out to Haggerty's attorney Heath Harris but never heard back.

Attempts to reach the family at their home were unsuccessful, as well.