Davis police have not said if suspect was involved in the initial car crash, and no other details about what led up to the shooting of Natalie Corona have been released. 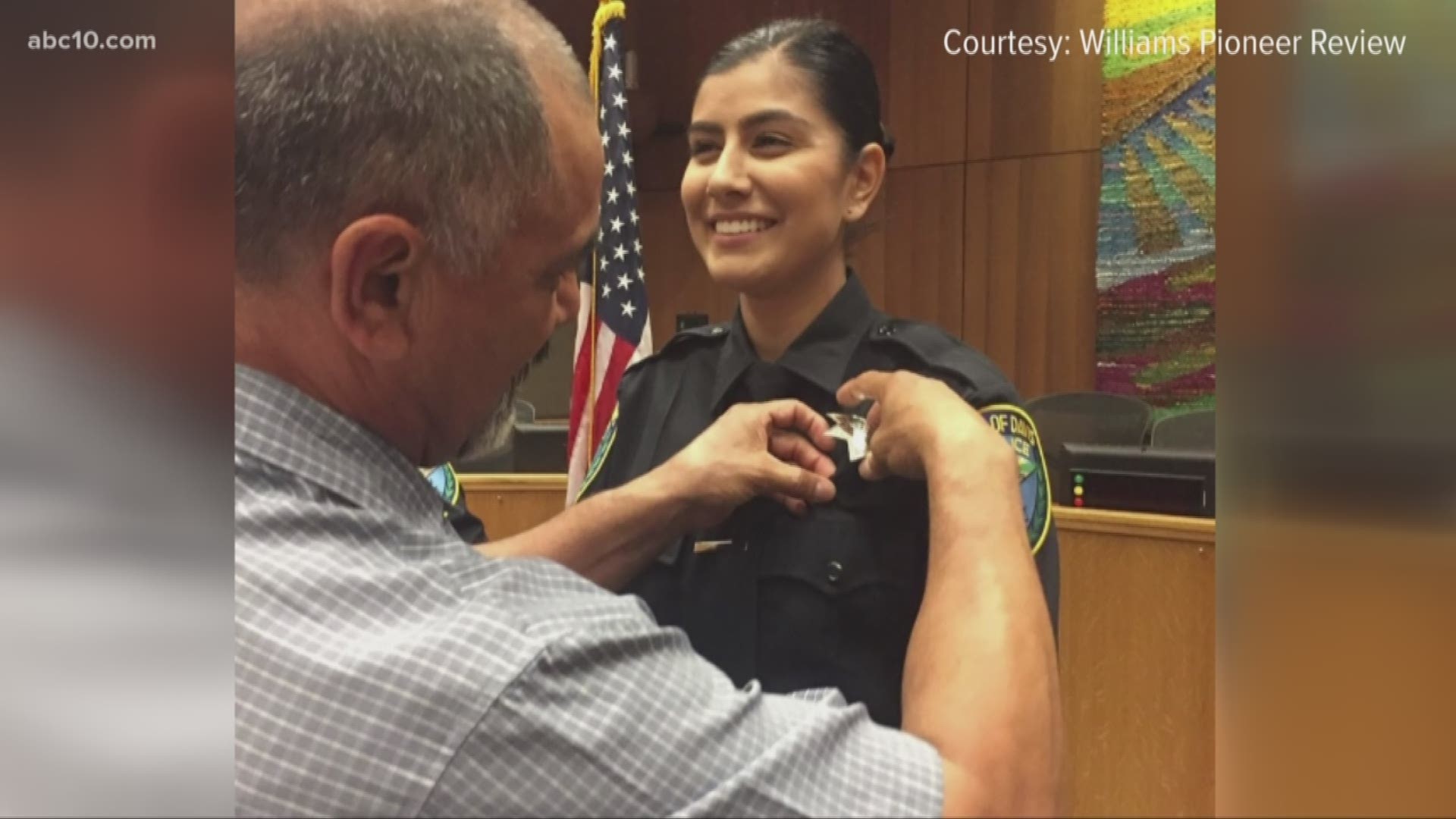 In a press conference Friday evening, Davis Police Chief Darren Pytel said Corona was sent to checkout a 3-vehicle crash on 5th Street, between C and D streets, just before the shooting.

While she was at the crash scene, Pytel said, according to witnesses, the suspect rode up on a bicycle and ambushed Corona while she was still speaking with drivers involved in the crash.

After being struck by the first shot, Pytel said Cororna fell down. The suspect approached, stood over Corona and “unloaded an entire magazine” on her. He then reloaded and started shooting at bystanders and other first responders, even chasing after a firefighter. A bullet struck the firefighter’s boot, but he was not injured.

A firetruck, a city bus and a home in the area were all hit with bullets, but no one else was hurt.

After the shooting, the suspect fled the scene heading south and went to a home in the 500 block of E. Street. At the house, police said the suspect met with his roommate and did not show any signs about what had just unfolded.

Investigators said the suspect dropped a backpack at some point during the chaos, and that is what led police to discover who, and more importantly, where the suspect was hiding.

Police soon surrounded the home and ordered the suspect to come out. Investigators say he came outside twice; once wearing a bullet-proof vest and a second time carrying a gun. After going back inside for the second time, police said the suspect barred the door with a couch and locked the deadbolt. They then said they heard a single gunshot come from inside.

A bomb-detection robot would eventually break through the door and that is when police learned the suspect was dead from an apparent self-inflicted gunshot. When officers made it inside the home they found two semiautomatic pistols. It is unclear if the weapons were purchased legally.

Police say they are poring over “a significant amount of video” from the scene, including Corona’s body cam and cruiser dashcam.

Pytel said he cannot release any information about the suspect until the Sacramento County Coroner’s Office does.

There are no preliminary details on funeral services planned for Corona. A candlelight vigil is scheduled for Saturday evening from 6 p.m. to 9 p.m. at Central Park in Davis, 401 C. Street.

It will be carried live on ABC10.com

Davis Police say they do not expect to have a news conference on Officer Corona's killing today.

A police officer who had been on the job only a few weeks was shot and killed by a suspect who opened fire as she was investigating a three-car crash, authorities in Davis said.

Police officials said Officer Natalie Corona, 22, was shot after responding alone to a traffic accident shortly before 7 p.m. Thursday in the city west of Sacramento. Corona was taken to UC Davis Medical Center in Sacramento, where she later died.

The suspect, who has not been identified, was later found dead inside a Davis, California, home with a self-inflicted gunshot wound, the Davis Police Department said.

Not long after the shooting took place, investigators zeroed in on a house in the 500 block of E Street, where the suspect was believed to have holed up. Police have not said if suspect was involved in the initial car crash, and not other details about what led up to the shooting have been released.

Following the shooting, police issued a citywide shelter in place order as officers from throughout the region searched for the suspect.

Police spent hours trying to coax the suspect out of a home about a block from the shooting scene, using floodlights and commands on loudspeakers for him to emerge with his hands up. At one point they sent in a robot and ignited flash bang grenades, the Sacramento Bee reported.

Officials announced early Friday he had been found dead inside.

Corona, whose father spent 26 years as a Colusa County Sheriff's deputy, graduated from the Sacramento Police Department's training academy in July and completed her field training just before Christmas, officials said. She had only been out patrolling on her own for a few weeks, a police spokesperson said.

She was the first Davis officer killed in the line of duty in six decades.

"She was a rising star in the department," Davis Police Chief Darren Pytel said. "She just worked like you can't believe."

Before she entered the academy, the Davis Police Department ran out of funding for the paid position she had been in. She didn't care; she showed up to work as a volunteer, Pytel said.

"Natalie was full of life and full of energy. She was an absolute pleasure to be around. She loved being around everyone in the department," said Davis Police Chief Darren Pytel.

"She was brand new to our city and it’s just really sad to see someone so eager and willing to be in this kind of work where so many people are being scrutinized right now.”

Governor Gavin Newsom released a statement, stating he and his wife were saddened to hear of Corona's death.

"Officer Corona was protecting her community from harm when she was tragically shot in the line of duty. Despite the valiant efforts of paramedics who rushed her to the hospital, and UC Davis Medical Center personnel, she succumbed to her injuries," Newsom's statement said. "We join all Californians in mourning the loss of this courageous officer and extend our deepest condolences to Officer Corona’s family, friends, and coworkers.”

1 / 7
Laus Photography
Davis Police Officer Natalie Corona is seen flying a "back the blue" flag. Corona, 22, was killed Jan. 10 after responding to a car accident.

Corona is the second officer killed in California in the past two and a half weeks and the second rookie, female officer killed in the country within the past two days. Officer Chateri Payne, who graduated from the police academy Nov. 16, died within hours of being shot outside a home Wednesday night, Shreveport Police Chief Ben Raymond said Thursday during a livestreamed news conference.

Cpl. Ronil Singh, 33, of the Newman Police Department was shot to death Dec. 26 after he stopped a suspected drunk driver.

Gustavo Arriaga Perez, also 33, was charged with the murder. Authorities said Perez Arriaga was in the country illegally and was preparing to flee to Mexico when he was arrested. That killing rekindled a debate over California's sanctuary law that limits cooperation by local officials with federal immigration authorities.