A procession will travel to Deputy Ishmael's hometown of Placerville. 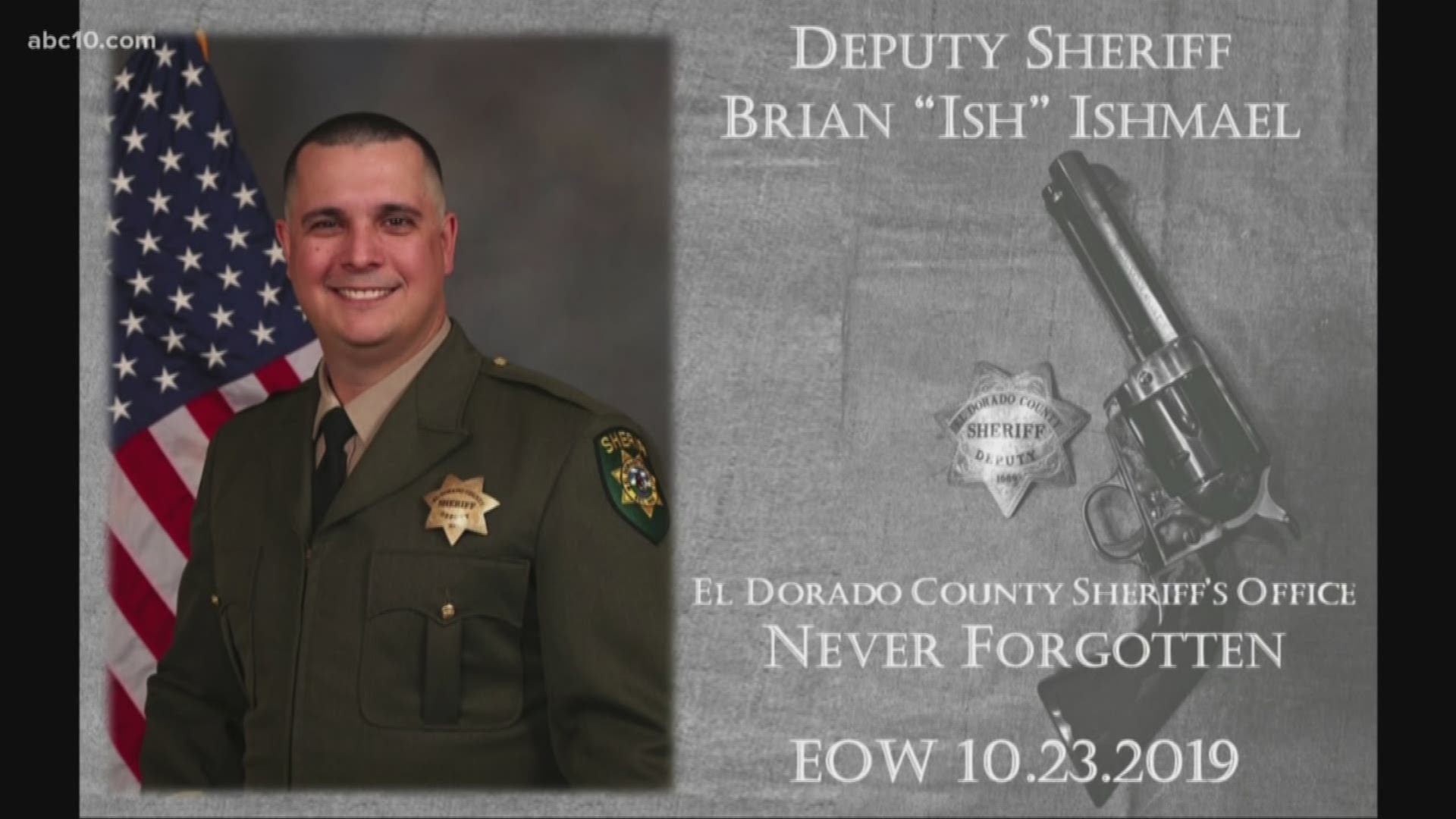 EL DORADO COUNTY, Calif. — With thousands in attendance and many more lining the streets, friends and family members said their final goodbyes to a slain El Dorado County deputy, who was hailed as a hero to his community.

Brothers in blue came from across the state and across the country with badges draped in black to lend solidarity to others for Deputy Brian Ishmael's memorial service.

Ishmael was shot and killed in the line of duty after he came under fire responding to a theft at a marijuana garden in Somerset.

Whether they made a trip from Oakland or a five-hour trip from Mammoth Lakes, they came in solidarity for a fellow law enforcement officer.

Roland Rendon made the long journey to Roseville from Fresno Police Department.

Chico Police Sgt. Todd Lefkowitz made the trip from up north. It marked the fourth time he's had to make this journey to honor another member of law enforcement.

“You know, these days are hard for us, but, we come together as a brotherhood and a sisterhood in law enforcement. We’re (here) to show support for Deputy Ishmael and his family,” said Lefkowitz.

Their solidarity and support didn't go unnoticed. Don Ishmael, the fallen deputy's father, was left speechless and thankful for the sheer number of attendees who came out for his son.

As officers from around the state and country showed their solidarity at the memorial, the service itself also served as a reminder of the danger their job holds and that, from the moment they put on a uniform, the consequences and actions of a given day could prove deadly.

After a solemn memorial service, the friends and family of a slain El Dorado County deputy said their final goodbyes.

A procession for Deputy Brian Ishmael will take him to his hometown of Placerville.

The procession is expected to start at 12:15 p.m. and arrive in Placerville by 1 p.m. It will take the following route:

Supporters have been encourage to line the procession route along Placerville's Historic Main Street.

Deputy Brian Ishmael was a veteran of the El Dorado County Sheriff's Office and the Placerville Police Department killed in the line of duty.

He's remembered for his kindness, his positivity, and the impact he had on his community. A solemn memorial service allowed thousands across the country and locally to say final goodbyes to Ishmael.

His end of watch call can be viewed below:

As a memorial service comes to a close, a gathering begins in the city of Placerville for their slain hometown hero, Deputy Brian Ishmael.

The Muir family is among many lining the streets of Placerville along the procession route to Ishmael's final resting place.

Ishmael served for two years as an officer with the Placerville Police Department, but had also attended El Dorado County schools throughout his life. He graduated from Ponderosa High School in 2000.

Credit: abc10kxtv
The Muir Family is among many lining the streets for the procession of slain El Dorado County Deputy Brian Ishmael's in his hometown of Placerville.

In October, Sheriff John D'Agostini hailed Deputy Brian Ishmael as a hero that their community lost.

During the memorial, his memory returned to his final moments with Ishmael in the hospital, where he saw him draped by the nation's flag. As he dealt with the difficult emotions, he recited the three things he said to Ishmael's body in that moment: "thank you," "we got this," and "your sacrifice will not be in vain."

“Thank you for being the warrior and for running toward the fray while the sheep ran away,” said Sheriff D'Agostini.

He said the sheriff's office will continue to service with the same passion Ishmael did, "because we're now serving it for you - always striving to set your fine example and make you proud."

Sheriff D'Agostini swore they'd turn the anger they feel toward the loss of their fallen brother into action. He hopes that the solemn occasion starts an uproar toward the inequities law enforcement faces and what they need to keep their communities safe.

“I pray this solemn occasion starts an awareness for the inequities facing our brothers and our sisters in our communities," said D'Agostini. "I pray this starts a conversation wherein our supposed leaders listen to us, Brian’s voice, all the warriors and the experts in our field, instead of gang members, felons and all those who don’t have a clue what we deal with.”

"I’m not sure that I will ever be whole again, but I promise you that these children will know all there is to know about their daddy and the man he was to all of us. I will remind them that that love can be found at 14 years old, because I am living proof,” recited McCourt on behalf of Katie Ishmael.

A father stunned by the outpouring of support and solidarity at Bayside Church Adventure shared the memories of his fallen son, Deputy Brian Ishmael, to thousands on Tuesday.

He said his son was the kind of man who could walk up to people in trouble, talk to them softly, and turn rage into repentance. While his son spoke softly, he said he always spoke with authority.

"He didn’t speak loud to people, said Don Ishmael. "This is why his kids are perfect.”

Don Ishmael went on to describe his conflicting emotions and say goodbye.

“The bad guys took one of our best," said Ishmael. "And this has got to stop. I love you all. And little buddy, I know you’re throwing that ball again for Noe which was his dog. Have fun B, and we’ll see you again.”

John Whitfield, a friend of Deputy Brian Ishmael, shared his history with the slain deputy. He said the community response to Ishmael's killing was beyond what he could imagine.

“Brian is my hero and now you can all see what I’ve known for my entire life, that he is your hero too. I love you brother,” said Whitfield.

He commended Sheriff John D'Agostini for his leadership during this difficult time at the department, and shared that Ishmael loved being apart of the sheriff's office and loved working for Sheriff D'Agostini.

Wes Kohutek, a friend of Deputy Brian Ishmael, remembers his fallen friend as the kind of man that other men could look up to.

"His positivity was infectious to event the most callous of people,” Kohutek said. “He was a great man and truly a good person. I know you hear people say that about other people all the time that have passed on, as just something nice to say. But Brian Ishmael was definitely one of those people.”

He said Ishmael helped teach him to live in the moment, love himself, and realize what a true friend was. Ishmael was remembered as a good cop who loved his job.

"That day I lost a friend and a brother but the world lost much more than that,” Kohutek said.

A service underway for a fallen El Dorado County deputy is underway with officers from across the country in attendance.

Deputy Brian Ishmael was a 4-year veteran of the El Dorado County Sheriff's Office. The deputy came under fire after responding to a theft call at a marijuana farm in Somerset. He was shot and killed.

He is remembered for kindness and his positivity.

Funeral services for El Dorado County Sheriff's Deputy Brian Ishmael have been set for Tuesday, Nov. 5 at 10:00 a.m. The services will be held at Bayside Church Adventure, located at 6401 Stanford Ranch Road, in Roseville.

Four people were subsequently arrested in relation to the shooting — two at the scene and two during the investigation.

Ishmael lived and worked in the community and was remembered as "personable, easy to talk to, kind, and always positive," D'Agostini said. They were character traits he carried with him during his time at the Placerville Police Department and El Dorado County Sheriff's Office, the sheriff's office said.

The funeral is open to the public. Though the procession is only for the El Dorado County Sheriff's Office (EDSO) and the Placerville Police Department, a large crowd is expected to line the route of the procession after the services.

Funerals for deceased law enforcement are typically massive, especially for those who have died in the line of duty, as many people want to pay their respects. With a community and several allied agencies wishing to honor Deputy Ishmael's sacrifice, EDSO predicts thousands of people will attend the services and watch the procession.

A map of the procession can be found here as well as below. The procession is expected to leave Roseville at 12:15 p.m. EDSO predicts an estimated time frame for arrival on Main Street in Placerville of 1 p.m., however, they recommend getting there early to make sure you do not miss it.

For those what cannot attend, ABC10 will be streaming the funeral services.

WATCH MORE: 'Express your condolences. Send cards. Send flowers.' Sac PD Chaplain on what people can do when an officer dies 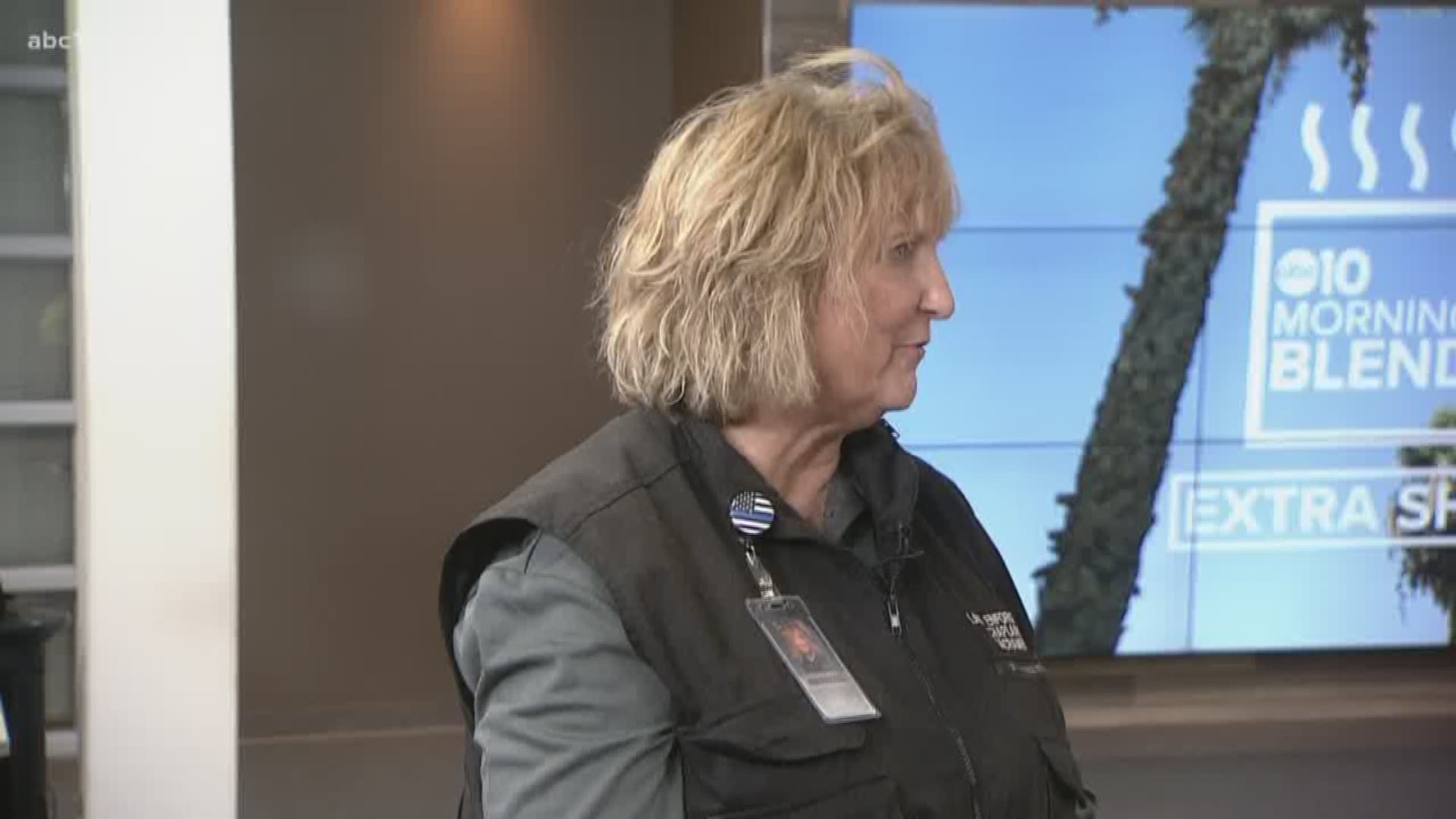