Federal judge declines to probe PG&E for obstruction of justice

A legal team called on the judge to appoint a special master to investigate obstruction, witness tampering after PG&E met privately with California PUC staff. 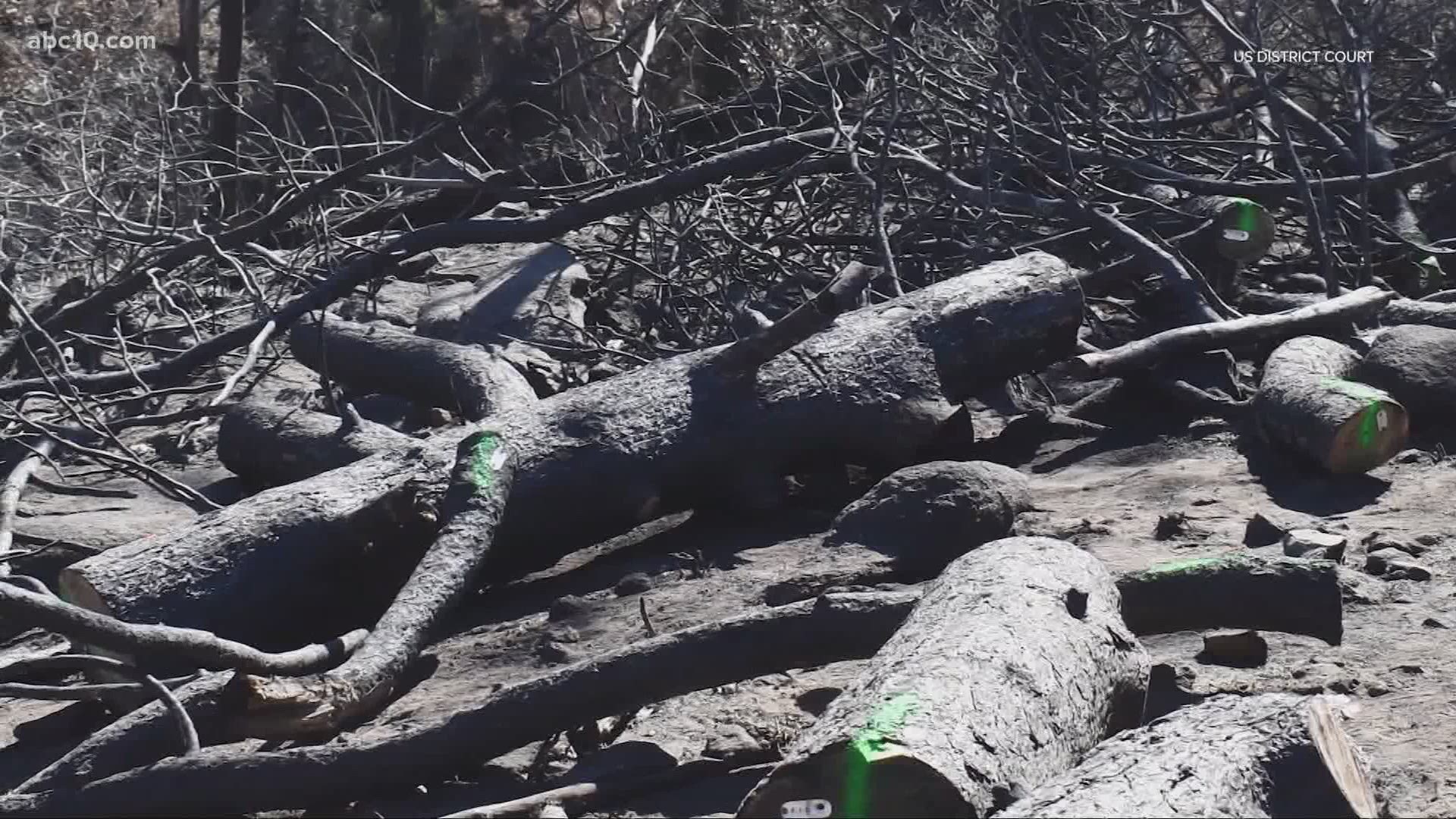 SACRAMENTO, Calif. — Note: this article has been updated to reflect the response Tuesday from US District Judge William Alsup and to include a statement from PG&E.

A federal judge declined Tuesday to investigate PG&E for obstruction of justice, witness tampering, and contempt of court as he works on new terms of probation for the company ahead of the coming fire season.

A former California utilities commissioner formally requested that US District Judge WIlliam Alsup probe PG&E for potential charges after the company withheld documents from the court's investigation of a deadly 2020 wildfire.

"They're playing games with a federal judge," former CPUC commissioner Catherine Sandoval, a Santa Clara University law professor who represents PG&E customers pro bono in the company's criminal probation, said. "The federal judge is not another party to be played. There are real rules here."

In a filing submitted to US District Judge William Alsup on Monday, March 29, Sandoval and her legal team called on the judge to appoint a special master to investigate PG&E for potential federal charges.

She believed PG&E may have again committed obstruction of justice.

"The request to hold PG&E in contempt of court is unwarranted," the judge wrote while denying the request to investigate the matter.

PG&E is on probation until January 2022 for felony obstruction of a federal investigation and five counts of willfully breaking federal pipeline safety laws in the 2010 San Bruno Gas Explosion, which killed 8.

During probation, PG&E was found guilty of causing the 2018 Camp Fire that destroyed Paradise, Calif., which resulted in the death of 84 people.

In response, Alsup declared he intended to protect people from more PG&E disasters by making the company do a better job of managing its tree-trimming and power shutoffs by imposing new probation terms.

When answering a long list of Alsup's detailed questions about the Zogg Fire, PG&E omitted a detailed analysis of the safety problems that it had already shared with its state regulators at the CPUC, which regulates utility companies.

"They were sneaking around and talking to the CPUC" to stoke opposition to Alsup's crackdown on PG&E Sandoval said.

She calls it a "deliberate evasion" of the federal judge's authority.

In a written statement PG&E called the suggestion that it had committed contempt or obstruction "meritless." The company's response did not address questions about why it shared details with the CPUC but omitted them from its answers to the judge.

NOTE: This investigation is a part of ABC10's FIRE - POWER - MONEY reporting project. If you have a tip that could reveal more about California's crisis with utilities and wildfires, please contact investigative reporter Brandon Rittiman at brittiman@abc10.com.

PG&E LINES NAMED AS OFFICIAL CAUSE OF DEADLY ZOGG FIRE

A hearing last Tuesday in PG&E's federal probation came just hours after the company's power line was named as the official cause of the Zogg Fire, which killed 4 people in Shasta County last September.

Among the victims were 8-year-old Feyla McLeod and her mother Alaina, who burned to death in a pickup truck trying to escape the flames.

"Nobody could experience the emptiness we all feel," said Feyla's grandmother Suzie Bewley. "I will pray for justice."

Cal Fire’s investigation found that a grey pine fell onto a PG&E distribution line during a windstorm, sparking the flames.

Local prosecutors are investigating PG&E and its officials for possible criminal charges, which could be as serious as murder.

Credit: US DIstrict Court
This image, submitted by PG&E to the federal judge supervising the company's probation, shows the gray pine tree suspected of starting the 2020 Zogg Fire by falling on to a PG&E power line. California laws and regulations require power companies to trim and cut trees so they don't hit uninsulated power lines and spark fires. PG&E told the judge it believes the tree may have been marked for removal, but not removed.

Inspection photos from before the Zogg Fire show the grey pine tree leaning toward the power line in question.

Alsup's inquiry revealed PG&E contractors had marked that tree to be cut down back in 2018, but the job was never done.

PG&E admitted that it does not factor in the condition of trees along power lines when deciding where to shut off power and that the company's database "does not talk to" the databases maintained by its tree-trimming contractors.

ABC10's own investigation of the data submitted by PG&E to Judge Alsup showed that the company made shutoff decisions without knowing the actual windspeed in the area where the Zogg Fire started.

PG&E SHARED TREE PLAN WITH REGULATORS, BUT NOT THE JUDGE

As he was investigating the Zogg Fire and making plans to address the safety problems behind it, US District Judge William Alsup did something extraordinary.

He filed an order last Monday night asking PG&E and its state regulators at the CPUC to hand over "by midnight" their communications between one another.

The documents submitted by both show PG&E and the CPUC met together at least 5 times this year to to discuss Judge Alsup's planned new conditions of probation, which are aimed at preventing a repeat of the Zogg Fire.

The request coauthored by Sandoval called it "a clandestine attempt to generate opposition to the proposed probation conditions while preserving [PG&E's] appearance of cooperation."

Emails in the collection of documents show that after business hours on March 8, PG&E hosted an online meeting for multiple CPUC staff members.

Included in the meeting invitation was a slide presentation with PG&E's detailed analysis of the risk of posed by trees that could fall on power lines and a new method for factoring that risk into shutoff decisions.

The PG&E documents spelled out a plan to lower the triggers used to implement power shutoffs in locations that had a higher number of those trees.

But when PG&E filed answers on March 12 to Judge Alsup's questions asking for PG&E's analysis and conclusions about this very issue, the PG&E presentation and its findings were left out.

Sandoval called it "unethical" for PG&E to omit the details from its answers to the judge and suggested in Tuesday's hearing that Alsup rule PG&E in contempt of court as a result.

After considering the issue further, she thinks PG&E's behavior may be criminal.

She had called on Alsup to appoint a "special master," a court-appointed investigator who can refer information to federal prosecutors for possible criminal charges.

Sandoval and her legal team argued PG&E may have committed obstruction and witness tampering by trying to get the CPUC to act as a mouthpiece against Judge Alsup's safety crackdown on the company.

“[PG&E is] essentially trying to do that thing where you tell Dad one thing and you tell Mom something else,” Sandoval said. “Then you try to get Mom to cover up for you so you don’t get in trouble with Dad.”

In fact, the CPUC did argue against the judge's planned crackdown on PG&E after viewing PG&E's analysis, warning that the judge's push for more shutoffs would go too far.

In a March 19 letter to Alsup, the agency warned power shutoffs "would have more than doubled" under plans shared by PG&E to factor in trees that could fall on lines when making shutoff decisions.

The agency later apologized. CPUC attorney Catherine Hammond, who co-signed the letter, retracted the prediction of doubling shutoffs in open court, calling it "an overstatement we made."

The presentation PG&E sent to regulators included a county-by-county map of how many potential shutoffs would have been ordered using a new method to predict tree strikes.

It showed an increase in shutoffs in many of the same places where PG&E lines have sparked deadly fires since 2015, including Shasta, Butte, Sonoma, Napa, Amador, and Calaveras counties.

Alsup said he was encouraged by the map, hopeful that the PG&E's method could actually lead to lifesaving shutoffs in the fire season ahead.

When Hammond pointed out that the same people who the judge hoped to protect are complaining to the CPUC about the harm of the shutoffs, the judge ran out of patience, accusing the agency of “years of neglect.”

“Of course,” Alsup exclaimed. “Those same people could be asking where was the CPUC from 1990 all the way up to 2017? Why wasn’t the CPUC requiring PG&E to obey your own general orders and to obey the California public resource code?”

When asked to comment on the judge’s criticisms, CPUC spokesperson Terrie Prosper did not address the agency's policies in the decades leading up to PG&E's deadly fires but pointed to several newer safety initiatives the agency says it's advancing.

JUDGE: CPUC LET PG&E ‘GET AWAY WITH' CAUSING FIRE DANGER

In last week's hearing, Alsup went on to dress down California's utility regulators for failing to protect people from fire danger caused by PG&E’s negligent maintenance and safety work on its 100,000-mile network of power lines.

“PG&E has put us in this position and the regulators let them get away with it. You did,” Judge William Alsup told an attorney for the California Public Utilities Commission in Tuesday's hearing. “The agency did not come down hard on PG&E when it would have made a difference.”

"PG&E has put us in this position and the regulators let them get away with it. You did. The regulators did not come down on PG&E hard when it would have made a difference."

ABC10's FIRE - POWER - MONEY investigation has revealed that the agency continues to give favorable treatment to PG&E, including by waiving a $200 million fine for PG&E safety violations behind wildfires that killed more than 100 people.

As a result of those disasters, Alsup has pressured the company to turn the power off in windy conditions and tried to impose probation terms that would make the company keep better track of maintenance and safety work.

CPUC lawyer Hammond pushed back, telling Alsup that he ought to give more weight to the harm caused by switching off the power.

PG&E's shutoffs since 2018 have hurt countless businesses, threatened people who rely on medical devices and knocked out critical communications.

"It's a Hobson’s choice... there is no good answer to it,” Alsup said. “It’s just which is the lesser of two tremendous evils.”

The judge said he intends to err on the side of saving lives from PG&E-caused fires.

“What’s worse? Four people burning to death, alive in the car? They get baked to death. The kind of death nobody should go through,” the judge asked, referring to the Zogg Fire. “To me, there’s a very clear answer to that.”

The judge said he won’t wait long to rule on PG&E’s new probation terms, pointing out fire season is only a couple of months away.

“I am not open to the idea that we would kick the can down the road and study the idea to death,” Alsup said. “We don’t have the luxury to wait around. This is where we are."