According to court records, a witness told police that Samuel was killed around May 10. That's 17 days before he was reported missing by his father's girlfriend. 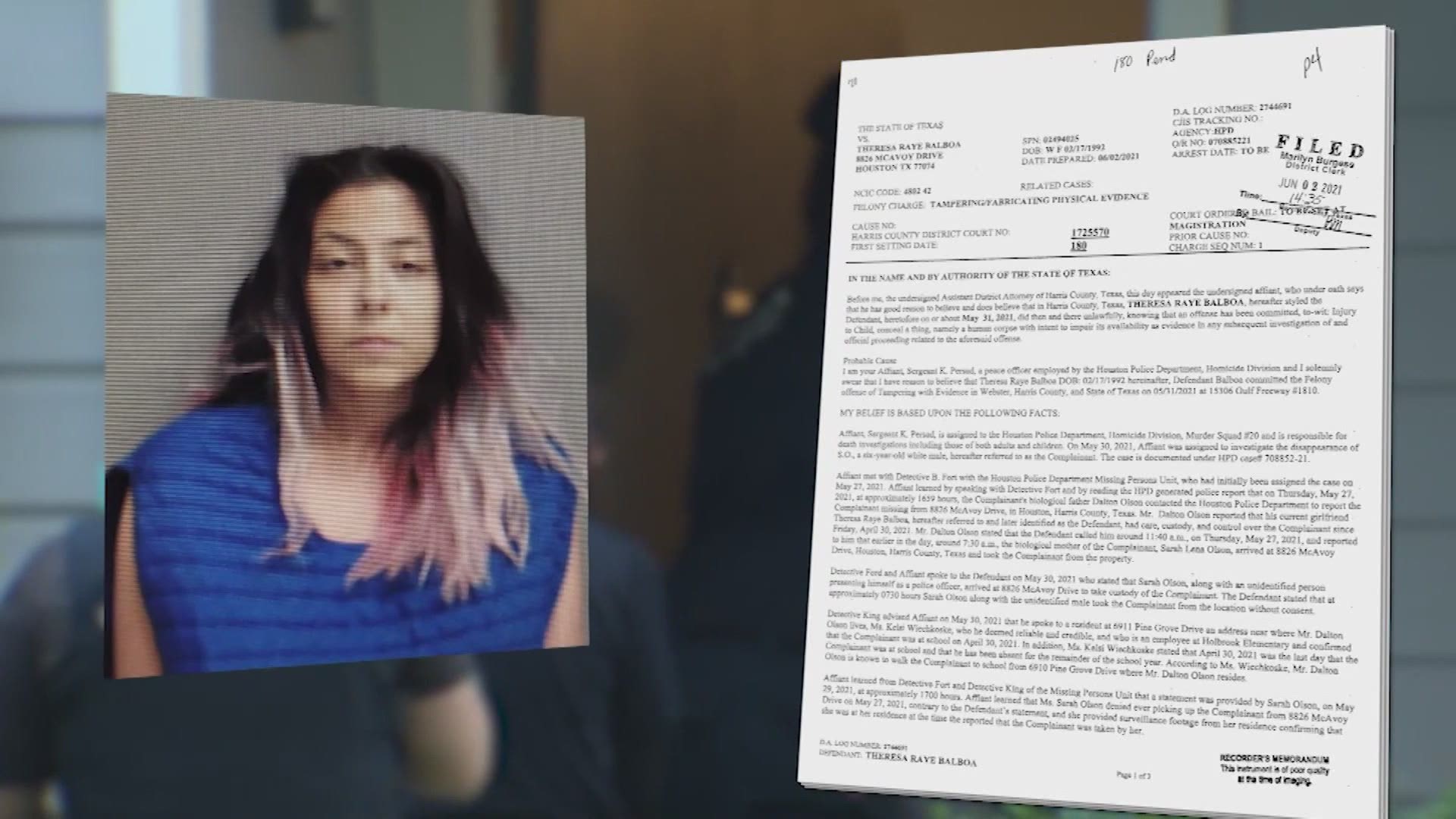 HOUSTON — Five days after 5-year-old Samuel Olson was reported missing from southwest Houston, his battered body was found stuffed in a tote in a Jasper motel room.

The boy's father's girlfriend, Theresa Balboa, was taken into custody at the motel and has been charged with tampering with evidence. She's the one who reported Samuel missing, but police said there were holes in her story from the beginning.

A roommate of Balboa's was arrested on June 22 and charged with the same thing. According to court documents, he helped Balboa hide Samuel's body.

Here's a timeline of what we know about this heartbreaking case.

April 30: Houston police said this was the last day Samuel attended school at Holbrook Elementary in Cy-Fair ISD. They said it’s also the last time anyone outside the family reported seeing the blue-eyed, curly-haired boy. Samuel’s paternal grandmother, Tanya Olson, told KHOU 11 that she last saw the boy the first week in May and last spoke with him on the phone about a week before he was reported missing.

Dalton Olson, Samuel's father, later told police the boy had been staying with Teresa and her roommate at their apartment in Webster since April 30.

May 10: On May 28, Balboa's roommate, Benjamin Rivera, told detectives that Samuel died on or around May 10. He said Balboa called him at work that day to tell him Samuel was dead. Rivera said when he returned home to their apartment in Webster, he saw Samuel’s bruised body lying on a bed. He said he and Balboa placed the body in a bathtub for a couple of days. According to court documents, text messages later show them discussing moving the body because an apartment maintence employee was coming by.

May 13: Rivera old police he went to Walmart and bought a plastic bin and duct tape. Investigators say the receipt was found during the investigation. Rivera said he and Balboa wrapped Samuel's body in a plastic sheet and put it in the bin.

May 27: Houston police received a call at approximately 6 p.m. that then 5-year-old Samuel was missing from southwest Houston. Officers responded to the house in the 8800 block of McAvoy Drive and interviewed Dalton Olson, Samuel’s father, and Theresa Balboa, Dalton’s girlfriend. Balboa, 29, told them Samuel's mother and a man dressed as a police officer picked him up that morning around 7 a.m. Balboa said the “officer” told her she would be charged with kidnapping if she didn’t turn him over.

Officers contacted Samuel’s mother Sarah and confirmed she had an alibi.

RELATED: Have you seen him? 5-year-old boy reported missing in southwest Houston

May 28: HPD Asst. Chief Heather Miller said multiple family members were questioned and there were “several inconsistencies” in Balboa’s story. Homicide detectives were assigned to the case.

May 29: Houston police put out an alert about Samuel to the media with no mention of Balboa’s claims about the mother and “police officer.”

Samuel turned 6. His mother Sarah left a cake, some balloons and candles next to a flyer with his photo and description. “I love you Samuel. I pray you’re OK. I love you my baby. Happy bday,” she posted on Facebook.

May 31: The search for Samuel continued to intensify. Texas EquuSearch volunteers searched an area near the Gulf Freeway and Dixie Farm Road, not far from Ellington Field.

"I sure as hell don’t think this is going to have a happy ending,” Equusearch found Tim Miller said.

Within walking distance of that area, police were searching the Gateway at Ellington apartment complex after they said they received reports that it was the last known location Samuel was seen. Miller later confirmed that Balboa lives at the complex with an unnamed male and it was her apartment they were searching. They also towed her car, a 2012 Dodge Avenger.

"We are trying to move with as much urgency as we can," Larry Saddlewhite, with HPD, said. "We're still not where we need to be in terms of locating him."

RELATED: Car towed away as search for 6-year-old Samuel Olson continues; hasn't been to school since April, police say 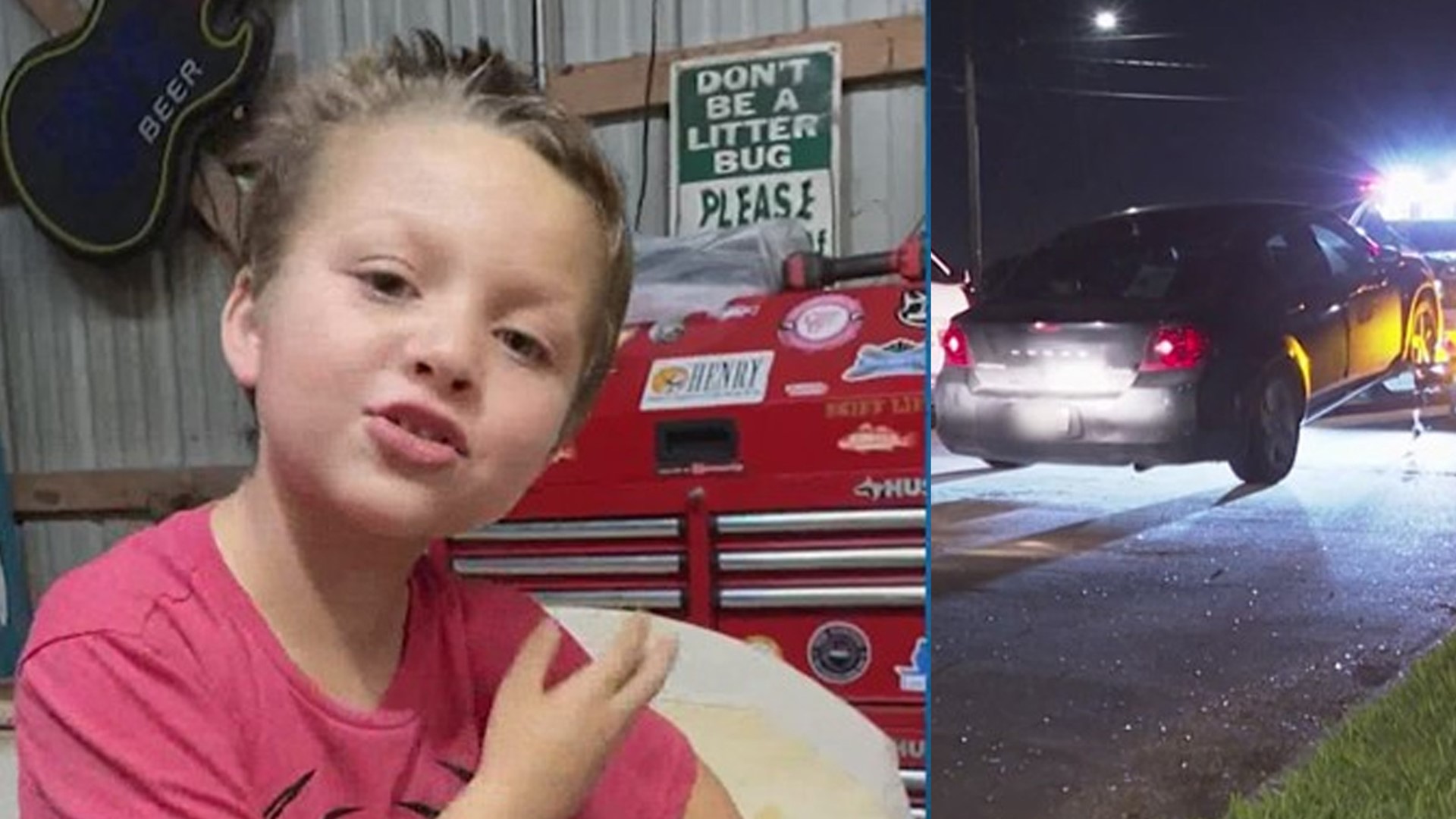 Meanwhile, another man said Balboa called him and asked for help. He told the Texas Rangers he met her at a Walmart in Cleveland, Texas, and drove her back to Webster to retrieve the bin from the storage unit. Then they headed for Jasper.

June 1: The man said he booked a room for Balboa under his name at the Best Western Inn on West Gibson Street in Jasper. A surveillance camera showed a man and woman get out of a truck registered to that man and drag a plastic bin into Room 106. It was approximately 3:30 a.m.

NEW: Previous mug shots of Theresa Balboa, the woman taken into custody at the Jasper motel where the body of Samuel Olson, 6, is believed to be found. Balboa was out on bond from an assault charge in November, which alleges she assaulted Dalton Olson, Sam’s father. @KHOU pic.twitter.com/YhpJDgaWAx

The man later went home and called Crime Stoppers and told them they could find Balboa at the Best Western. He has not been charged so we're not identifiying him. Jasper police found Balboa and the body of a child in room 106. They contacted HPD and the Texas Rangers, who headed to Jasper. Balboa was taken into custody. Houston Police Chief Troy Finner tweeted that they believe the victim found is Samuel. 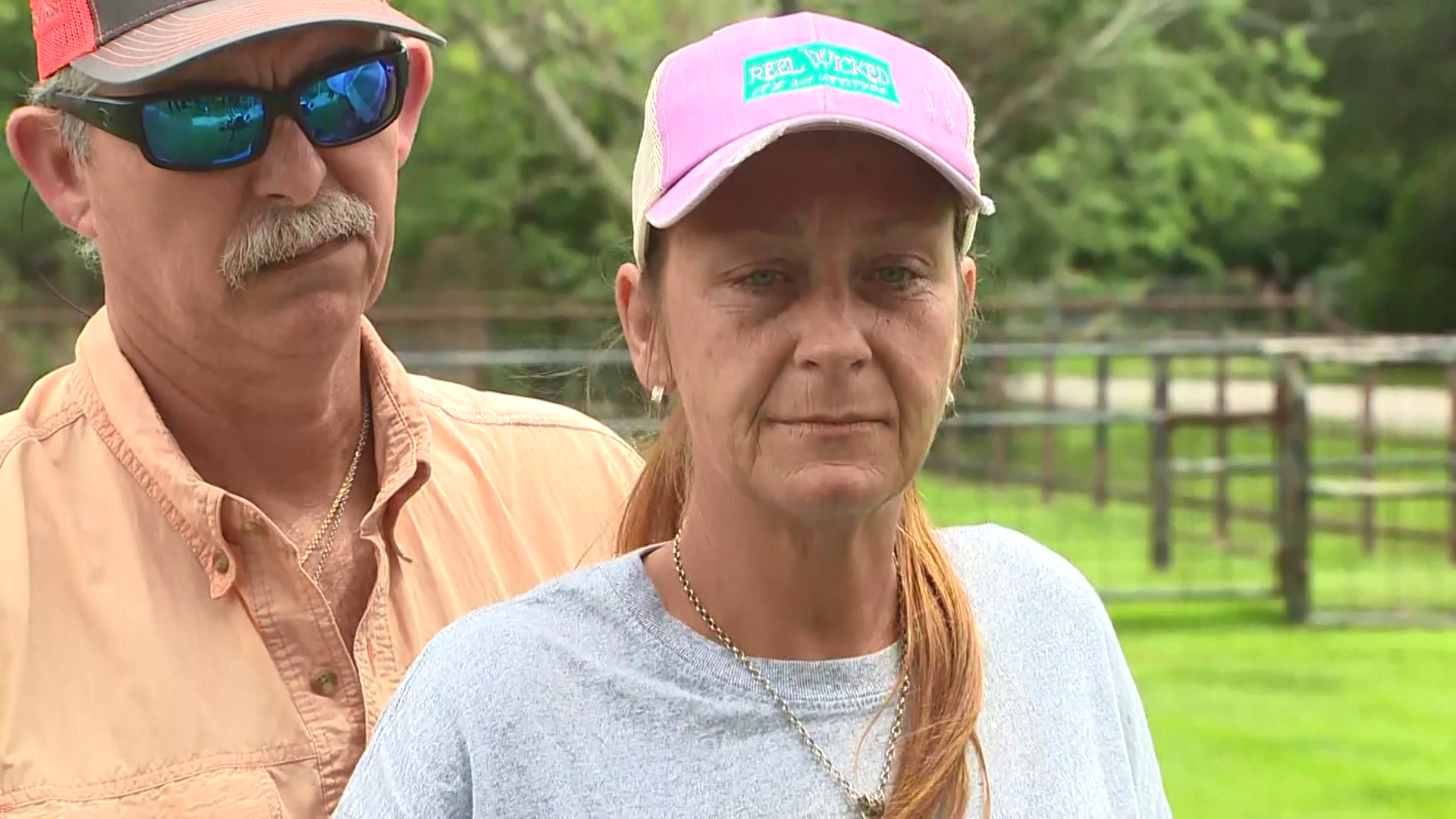 June 2: At a news conference, HPD Assistant Chief Heather Miller confirms the body of a child found in a Jasper motel room is believed to be Samuel, but they must wait for the medical examiner to make a positive identification.

“This is an absolute tragic event, and our prayers go out to the family," Miller said.

She said Balboa has been charged with tampering with evidence. She is behind bars in the Jasper County Jail but will be returned to Harris County soon for further questioning. 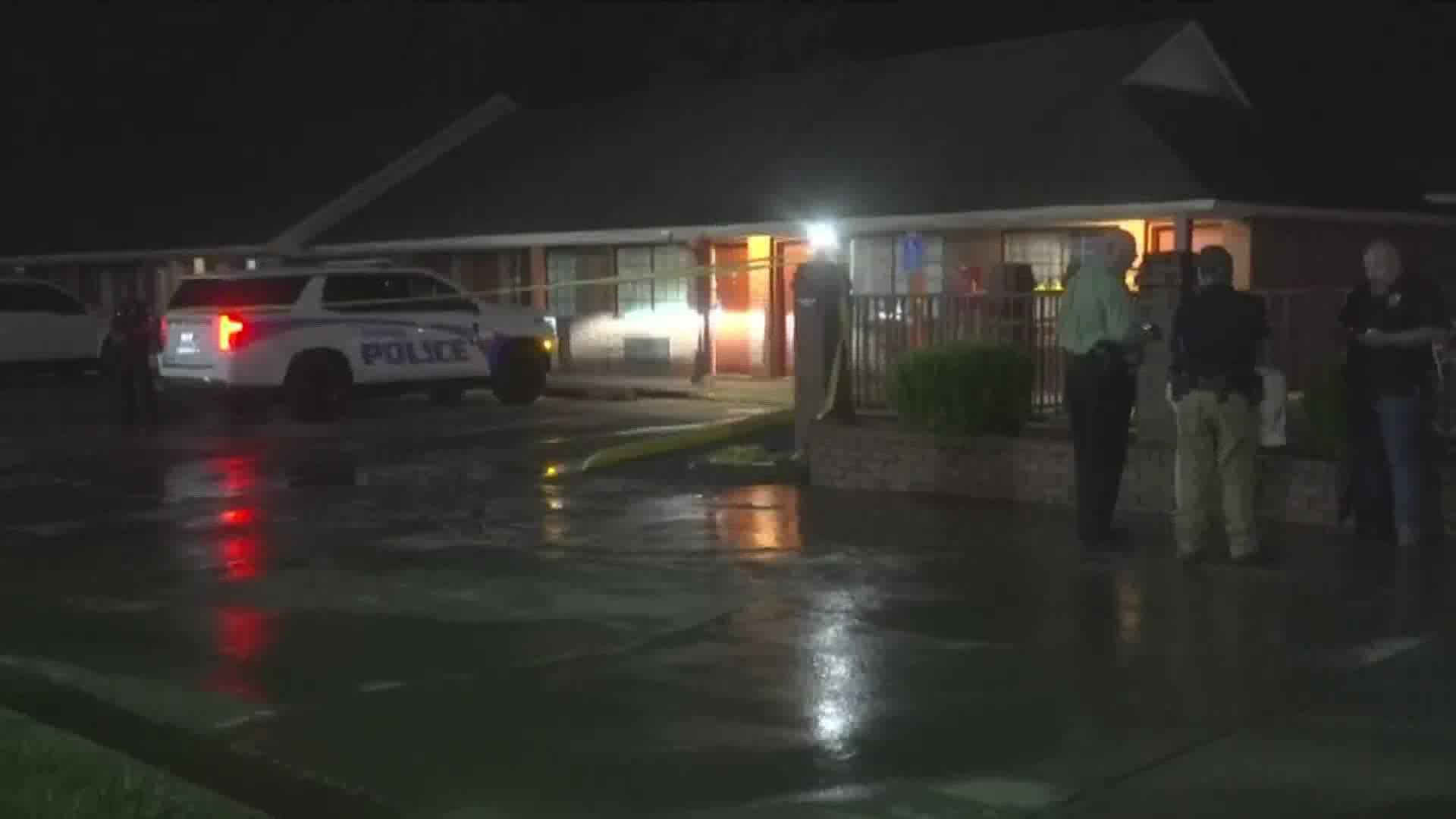 Miller said homicide detectives plan to question other people about Samuel’s disappearance, including the boy’s father.

She said they don’t have a motive in the case and are hoping surveillance video from the motel can help provide some answers.

BREAKING: New mug shot of Theresa Balboa. She was detained at the motel where Samuel Olson’s body was believed to be found. @KHOU pic.twitter.com/YZ3eisvTD7

Tanya Olson said she's shocked that Balboa was arrested in connection with the case. Samuel's maternal grandmother, who said her daughter has been in a custody dispute with Dalton, told us she’s broken beyond repair.

"It was just devastating over there last night and seeing dad go through all the pain and grief and everything he was going through," Miller said.

NEW: Previous mug shots of Theresa Balboa, the woman taken into custody at the Jasper motel where the body of Samuel Olson, 6, is believed to be found. Balboa was out on bond from an assault charge in November, which alleges she assaulted Dalton Olson, Sam’s father. @KHOU pic.twitter.com/YhpJDgaWAx

June 3: The child's body is taken from Jasper to the Harris County Medical Examiner's Office where an autopsy will be performed to positively identify him.

Also on June 3, KHOU 11 learned that Balboa lost custody of her own children two-and-a-half years before Samuel's death. Court records reveal a troubled history between her and those children's father.

We also learned that Dalton allowed Balboa to watch Samuel with an ex-boyfriend despite a protective order Dalton had against her. According to court documents, Balboa assaulted Dalton last November and she was ordered to stay away from him and his family.

RELATED: Theresa Balboa, suspect in Samuel Olson case, lost custody of her own children in 2019

“I put myself in a position with that woman in which the only possible outcome was failure," wrote the father of Balboa's children in a letter to the judge requesting that custody be awarded to his mother. "Things had gotten so bad between Theresa and I and we couldn’t get along, it became an onslaught of verbal and physical abuse between the both of us and towards each other.”

June 4: Balboa was brought back to Houston from Jasper on Friday.

She didn't appear in probable cause court, but a judge set her bail at $500,000, reported KHOU 11's Adam Bennett. If she is released, she must wear an ankle monitor and be under house arrest. She also cannot have contact with children.

"The facts set forth in this warrant are terribly disturbing," argued a prosecutor in court Friday.

The court-appointed attorney asked for a $20,000 bond.

The new amount includes $500,000 on the tampering with evidence charge and another $100,000 added on the charge of impeding the breathing of Samuel's dad last November.

The district attorney said more charges could be coming once an autopsy is complete on the body found in the Jasper motel room.

June 8: The body found in a plastic bin inside a Jasper motel room is positively identified as Samuel Olson.

According to the initial autopsy report, Samuel died from "homicidal violence with blunt head trauma."

June 22: Benjamin Rivera, Balboa's roommate, was arrested and charged with tampering with evidence - a human corpse.