True Crime Files: Did the Zodiac murder a Southern California couple in 1964?

The infamous serial killer may have started his crime spree in San Diego County. 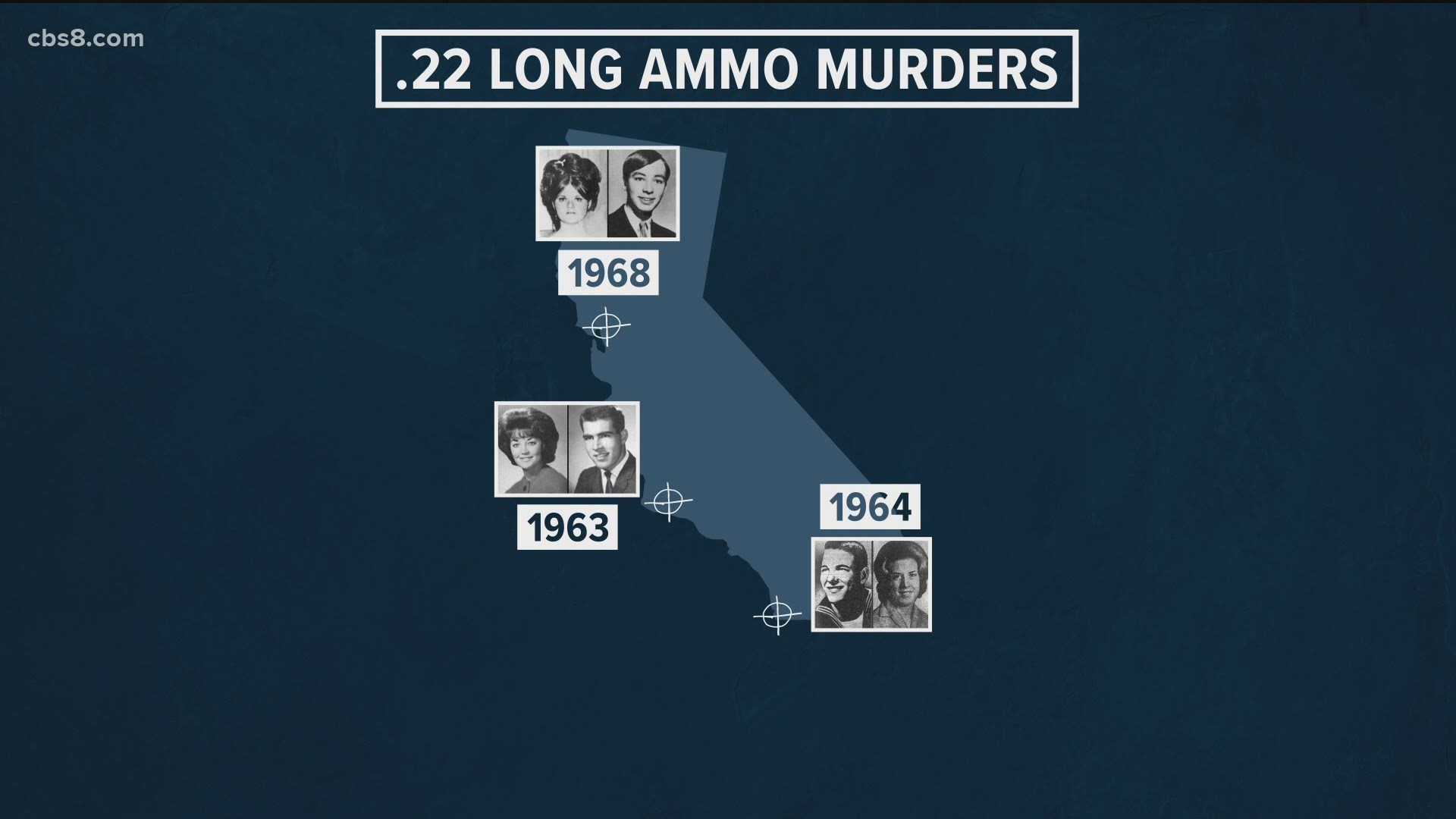 SAN DIEGO — The infamous Zodiac killer, who murdered five people in the Bay Area in the late 1960s, has never been identified.  Now, some experts believe he may have started his killing spree in San Diego County.

On Feb. 5, 1964, a sniper gunned down newlyweds Johnny and Joyce Swindle in Ocean Beach, as they walked along a cement path at the foot of Narragansett Ave.

News 8 retrieved archive film footage of the crime scene, which has not aired in more than 50 years.  The footage included interviews with police and witnesses to the double murder.  Hard copies of original News 8 scripts provide additional details of the crime.

“I heard two gunshots. They were about two to three seconds apart and then I heard a man scream, ‘No! No!’” said neighbor Marci Shields during a 1964 interview at the scene of the crime.

The killer on the cliffs fired five shots, wounding both victims. He then climbed down the rocks to finish them off, shooting each of them one more time in the head.

Swindle was found collapsed over the side of this wife. Investigators believed he was trying to protect this wife from the sniper's bullets.

“You could see he was gurgling and gasping. Of course, I ran back up because I knew we needed an ambulance,” said one neighbor, identified as Mrs. West in the 1964 filmed interview.

Tom Voigt runs the web site, Zodiackiller.com. He said the double murder in Ocean Beach did not appear to be a random attack.

“Joyce and Johnny, in my opinion, are the perfect candidates to be early Zodiac victims,” Voigt said.  “Just the fact that somebody was in such an unusual spot up on the bluff at night in February; he seemed to have known their routine and he was expecting them.”

At the time of the murders in Ocean Beach, the Zodiac killer was not on anybody’s radar. But right away, San Diego Police detectives believed there was a connection to the murders of another young couple, eight months earlier, on a remote beach in Santa Barbara County.

There had been reports of sniper shootings at teenagers two days before the murders, although no one was hit in those earlier incidents.

The killer of both couples in Southern California used .22 caliber long ammunition, just as the Zodiac killer did in Solano County in 1968.

“We have the distinct fingerprint of the Zodiac on these cases in Southern California,” Korsgaard said.

The San Diego Police chief in 1968, O.J. Reid, also was looking for a connection to the Zodiac, when he mailed a letter dated December 31, 1968 to detectives investigating the Solano County murders of David Faraday, 17, and Betty Lou Jensen, 16.

“The weapon used was apparently a .22 Remington rifle model 550-1.  Please forward one of the cartridge cases recovered (from the Solano County murders) so that it can be compared with ours,” the SDPD Chief Reid wrote in 1968.

Additionally, during the murders of Domingos and Edwards on the beach in Santa Barbara County, the killer used rope to tie his victims. The Zodiac killer used pre-cut pieces of rope to tie up a couple at Lake Berryessa in Napa County in 1969, before stabbing them.

And, as News 8 reported earlier this year, the 1962 murder of cab driver Ray Davis in Oceanside also may be the work of the Zodiac. In that case, the killer used .22 caliber long ammo and made taunting and threatening phone calls to Oceanside police.

In 1969, the Zodiac similarly targeted cab driver Paul Stine in San Francisco, shooting him in the head during the serial killer’s last confirmed murder.

“I have a feeling there are more victims down there [in SoCal],” said Voigt, the Zodiackiller.com webmaster.

The San Diego Police Department did not respond to News 8 regarding a possible Zodiac connection to the 1964 murders in Ocean Beach.

Regarding the 1962 murder of Ray Davis, an Oceanside Police spokesperson said there is nothing new to report in the investigation.

"San Francisco PD is not very forthcoming with the evidence we sent them and most likely hasn’t been processed yet," the spokesperson, Tom Bussey, wrote in an email to News 8.