"When you're in that position, and you have a school that's diverse and you have all of these protests... you need to be more considerate and mindful," one mom said. 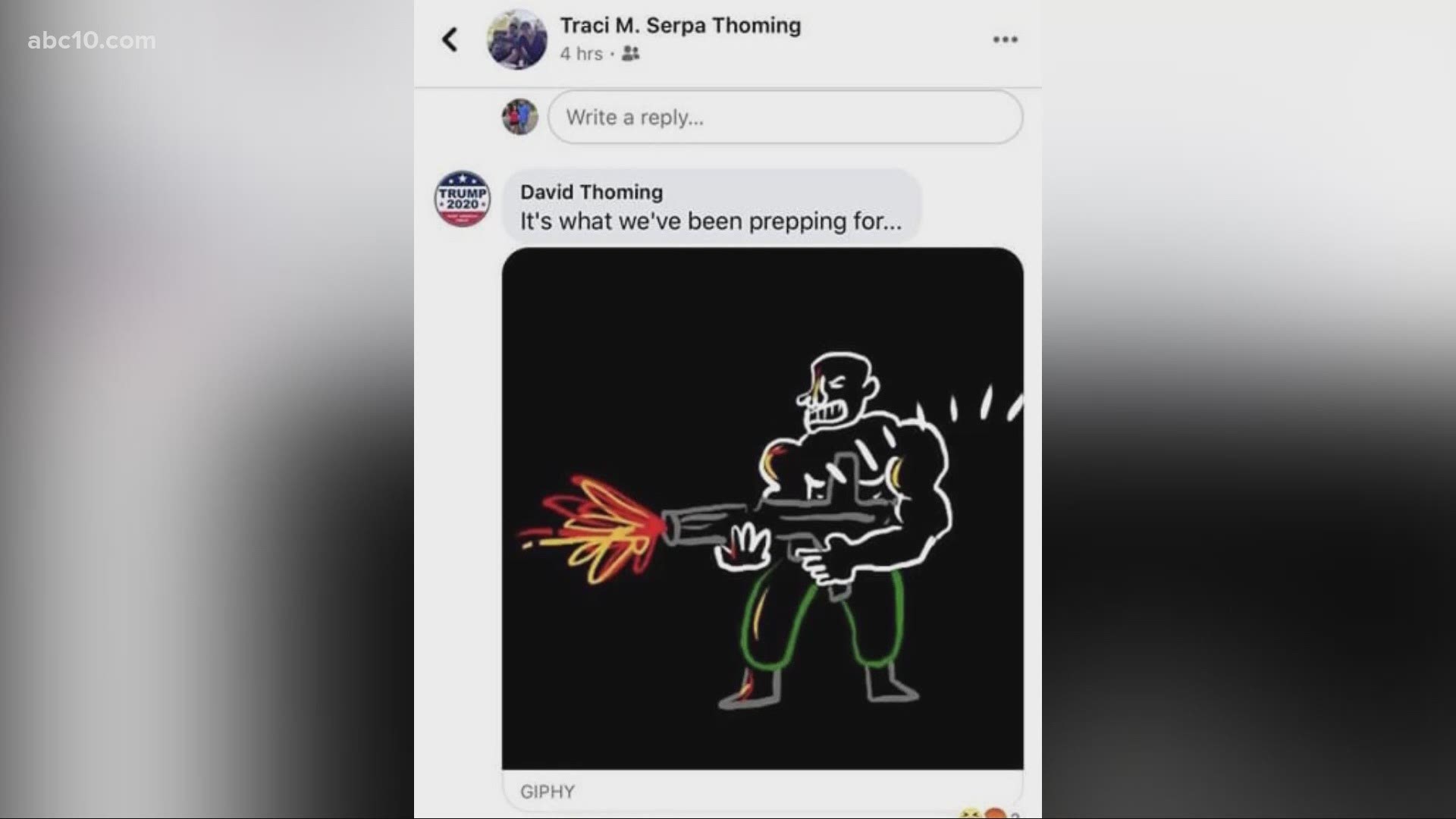 TRACY, Calif — A San Joaquin County community is divided over Facebook memes posted by a school district's superintendent and his wife last week. One group of angered Tracy parents describe the memes as racist and violent and demand an apology and resignation, while others support the family's right to free speech.

David Thoming, who has been the district's superintendent for 14 years, responded with a drawing of a muscled figure with an assault rifle and a caption that read, "It's what we've been prepping for."

The post appears to be a response to rioters. "So rioters you say country boys are next. You do realize country boys will sit 30 feet up a tree all day just to kill something."

On Thursday, ABC10 reached out to Thoming, but he declined to comment.

In a statement to the local newspaper Tracy Press last week, Thoming said the post was meant to address any potential rioter threatening his family. Since the he posted the picture, Thoming told the paper that he has "received direct death threats, in more than one format."

But others are not convinced.

"You're insinuating that it's okay to kill rioters," said Kim Ruiz, who is among several parents at who say the responses to the post showed them, bullying isn't limited to the school yard, but also among administrators of the rural charter school system that prides itself as a country school.

Pamela Houston, another parent in the district said she thought it was racist.

"I was so offended that other staff chimed in and the superintendent chimed it," Houston said.

When Gina Pettis replied that the posts were scary to her six children who support racial justice protests, Thoming's wife shot back, "Our school is a school of choice your children do not have to go there. They are welcome to go to their home district."

Pettis says her children would go to Manteca Unified, but that both her and her siblings have had their children enrolled in the New Jerusalem district for six years.

Now, a group of parents are demanding Thoming's resignation and an apology, saying they were prevented from speaking during a board meeting Tuesday evening where other community members showed support for the Thomings.

"When you're in that position, and you have a school that is diverse and you have all of these protests," Houston said, "and you have a population of Black students in your school — I think you need to be more considerate and mindful."

According to data from the California Department of Education, New Jerusalem New Jerusalem Elementary School District is rather diverse having had in the 2019-2020 school year 42% of its enrollment Latino students, 29% white, 11% Black and 6% Asia.

The School district issued a statement condemning racism and violence, saying that it will continue to review the incident.

"We are proud of our history of an inclusive and diverse student body and seek to encourage and support all students and members of the community," the district said in a statement.

Follow the conversation on Facebook with Van Tieu.
The headline to this article was changed to avoid confusion with the superintendent of the San Joaquin County School District.