Despite the destructiveness of the out-of-control fire, Navy officials reported late Tuesday morning that the vessel appeared to have escaped irreparable harm. 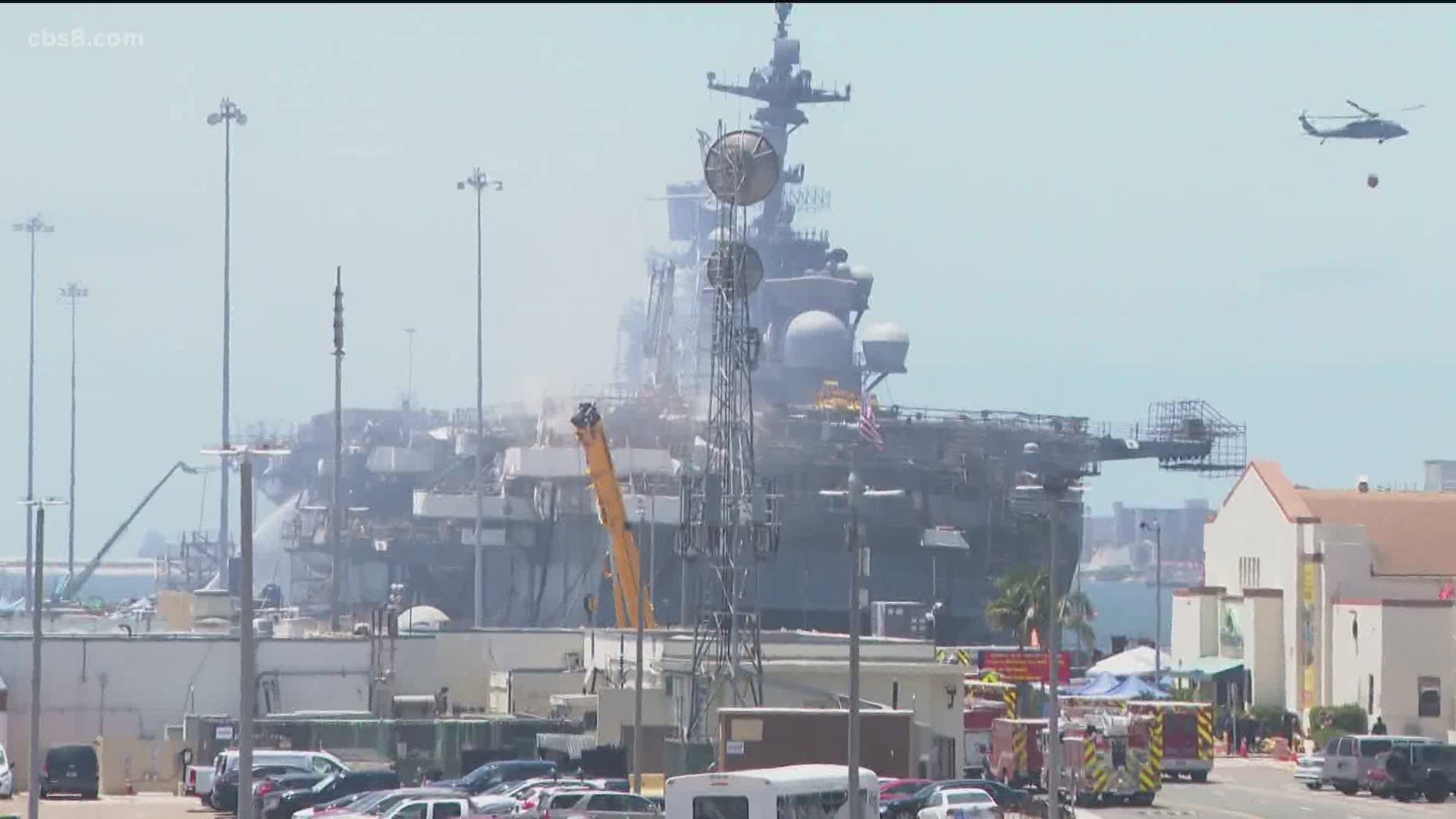 SAN DIEGO — Military and civilian emergency crews spent a third day battling a raging blaze aboard the USS Bonhomme Richard at Naval Base San Diego on Tuesday, laboring to control a perilous crisis that injured scores of firefighters and ravaged the warship.

Fire teams consisting of Federal Fire San Diego and U.S. Navy sailors have been fighting the fire. The fire teams consist of more than 400 sailors from 12 San Diego-based ships, according to Navy officials.

Despite the destructiveness of the out-of-control fire, Navy officials reported late Tuesday morning that the 22-year-old vessel appeared to have escaped irreparable harm, though all-out efforts to quell the flames and smoldering hot spots were ongoing.

Naval forces were "doing everything they can" to save the ship more than 24 hours after the conflagration erupted on its lower decks, sending temperatures as high as 1,000 degrees in parts of the vessel and leaving it listing in the water, Rear Adm. Philip Sobeck told reporters during a late-morning briefing Tuesday.

According to Sobeck, the Navy believes the fire was started by supplies in a storage area in the lower half of the ship.

Get a firsthand look as Sailors and Federal firefighters responded to a fire onboard the #USNavy amphibious assault ship #USSBonhommeRichard (LHD 6) at Naval Base San Diego. July 12, a fire was called away aboard the ship and continues to be fought. pic.twitter.com/UHb9OV2d3j

The Navy released a statement Tuesday night advising people to be wary of scams purported to help those affected by the fire:

At this time, the Navy is assisting Bonhomme Richard Sailors affected by the fire with all essential items. If you are considering making a donation, please be aware of scams and unofficial sites.

NCIS urges the DON family and community members to remain vigilant of fraudulent GoFundMe pages and other fraudulent charities soliciting for donations in response to the fire aboard USS Bonhomme Richard (LHD 6)."

During Tuesday's media availability, Rear Admiral Sobeck said there currently is no threat to the ship's onboard fuel tanks.

"First, we have investigated the four main engineering spaces (of the ship) and found no major damage," Sobeck said. "There is no threat to the fuel tanks, which (are) well below any active fires or heat sources. The ship is stable, and (its) structure is safe."

As of midday, flight personnel had conducted more than 1,200 helicopter water drops on the ship, a process that was "cooling the superstructure and flight deck, enabling fire crews to get onboard internally to fight the fire," and tugboats equipped with water cannons were "providing firefighting support from the waterline," Sobeck said.

Helicopter Sea Combat Squadron Three has conducted more than 1,200 helicopter water bucket drops, which is cooling the super structure & flight deck enabling fire crews to get onboard internally to fight the fire. Tugs are also providing firefighting support from the waterline.

The blaze broke out shortly before 9 a.m. Sunday in a part of the vessel where cardboard and drywall supplies are kept, and soon was sending thick columns of acrid smoke above the bay.

Because the vessel was undergoing maintenance work when the fire erupted, its built-in flame-suppression system was inoperative, according to base officials.

After about 90 minutes, authorities decided to remove all firefighters from the vessel for safety reasons and battle the blaze by remote means, including helicopters and boats surrounding it on the bay.

The conflagration sent below-deck temperatures as high as 1,000 degrees and eventually left the ship listing due to the amount of fire- suppressing water it had taken on, Navy officials said.

About two hours after the fire began, a blast of unknown origin shook the vessel.

No San Diego Fire-Rescue Department firefighters "were on board the ship when the explosion happened, but the blast threw several firefighters off their feet," the city department reported.

Adding to the dangers posed by the inferno, the flames were burning several decks away from a section in the ship where a million gallons of oil is housed, Sobeck acknowledged Monday, though he expressed confidence that firefighters could keep the blaze away from that storage area.

This is a comparison of the USS Bonhomme Richard from yesterday to today. In the top picture you can see the ship listing (tilting) due to water being dropped on and pumped in to fight the fire. The bottom picture shows what it looks like this morning. @CBS8 pic.twitter.com/YhCPyhztB6

There were 160 sailors and officers aboard the ship when the fire broke out, Navy spokesman Brian O'Rourke said.

About four hours after the ship began burning, the Navy moved the USS Fitzgerald and USS Russell to berths farther away from the fire, according to Mike Raney, deputy public affairs officer with the Naval Surface Force.

What sparked the blaze remains unknown.

"Going forward, the Navy will do a thorough investigation of the incident, to assess the cause of the fire (and) damage to the ship," said Sobeck, commander of USN Expeditionary Strike Group Three. "But right now ... my focus and our focus remain putting the fire out and keeping our ship base safe."

Among the precautions in the area of the blaze instituted by the U.S. Coast Guard were a one-nautical-mile safety zone on the waters surrounding the ship and up to 3,000 feet in the air above it.

USCG personnel also were assessing "environmental sensitivities and has contracted an oil-spill response organization to preemptively deploy protective boom to guard against any potential environmental concerns," according to a statement from the federal maritime agency.

Users of neighboring marinas were being advised to "utilize protective safety measures" as well, according to the agency.

"The Coast Guard's primary objective is to preserve life, protect the marine environment and protect the port," said Capt. Timothy Barelli with Coast Guard Sector San Diego. "We have identified and addressed environmental vulnerabilities and concerns. With regards to pre-positioning equipment booms and also equipment, we're pre-staging in the event that we there is a potential discharge." 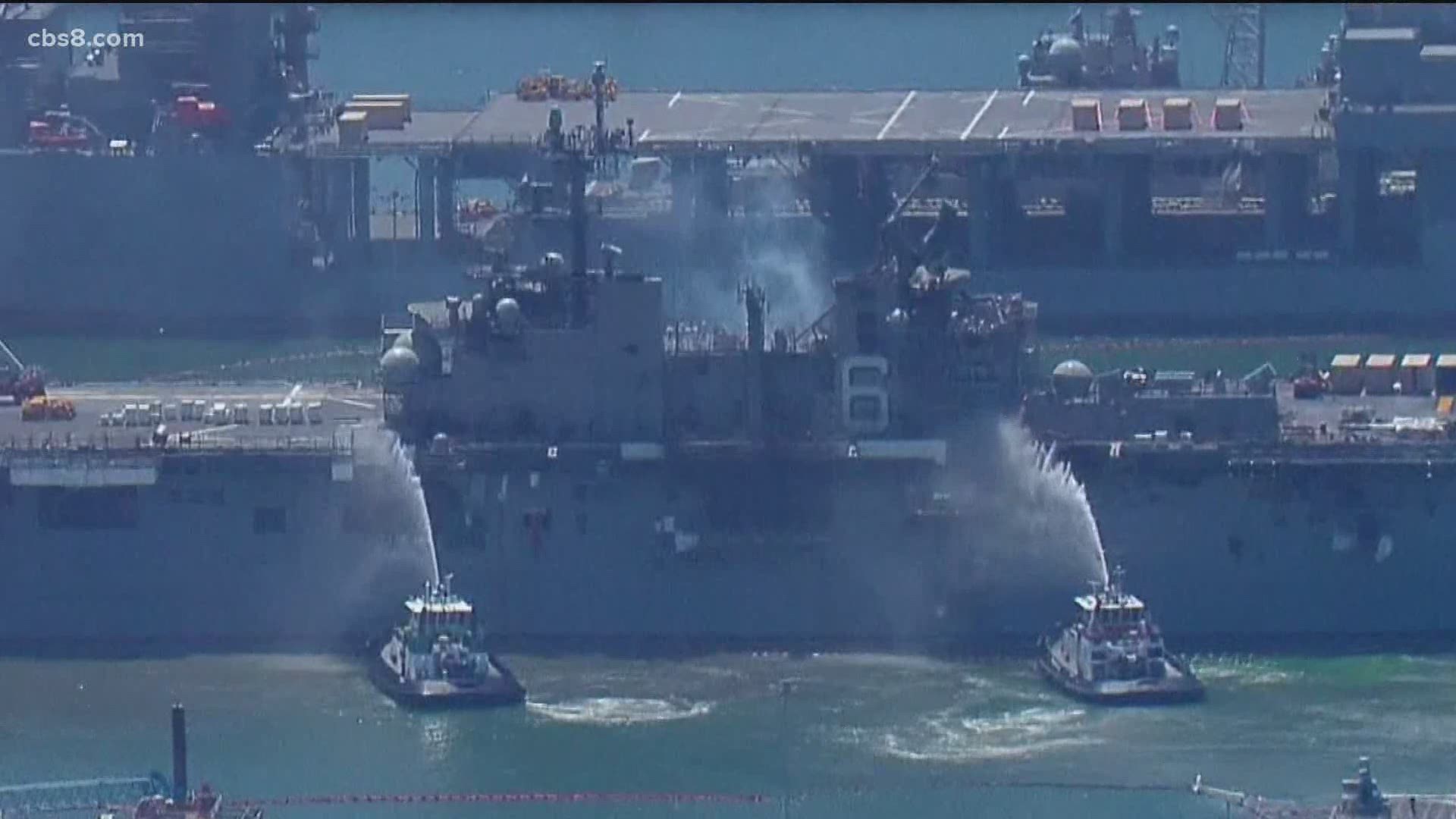 Despite the severity of the fire, Sobeck told news crews he was "absolutely hopeful" that the personnel were doing everything possible to make sure the Bonhomme Richard could sail again.

"I cannot tell you how extremely proud I am of the work that our sailors have shown -- the toughness, the resiliency and the teamwork with their fellow firefighters (from outside fire) departments," Sobeck said.

On Sunday, Mayor Kevin Faulconer pledged that city officials were "here for the sailors and civilians affected by the ship fire at Naval Base San Diego."

"All of the crew is off the USS Bonhomme Richard and accounted for," Faulconer noted. "Thank you to our brave sailors and rescue crews."

Officials in National City asked residents to remain in their homes as much as possible to avoid health hazards from the smoke billowing off the burning ship. Likewise, the San Diego County Air Pollution Control District Office noted that if residents can smell acrid smoke, they should limit physical activity and stay indoors if possible.

"Right now, we're not seeing anything rise to a level of health concerns for the public," county Public Health Officer Dr. Wilma Wooten said Monday. "However, where smoke is present, San Diegans should limit physical activity and stay indoors, if possible, to limit exposure to particulate matter. The situation could change, as the fire is expected to be burning for a few days."

The naval commander echoed that advice.

"As we continue to fight the fire, we remain cognizant of environmental concerns regarding the water and air quality," Sobeck said. "We recommend residents follow county advisories for safety out of an abundance of caution."

San Diego County took samples of the air over the past few days and is analyzing them to determine what was released into the air. Levels at Sherman Elementary School, which is the closest permanent air quality monitoring station to the fire, showed Tuesday that levels were either good or moderate, the second-lowest category.

"We're doing a lot of additional measurements to try and see what's in this area and its health potential health impacts for people," said William Brick with the San Diego Air Pollution Control District.

The Bonhomme Richard is the third warship in U.S. naval history to bear the name, which means "Good Man Richard" in French and honors Benjamin Franklin's Poor Richard's Almanac.

The vessel has been homeported at Naval Base San Diego since the spring of 2018, when it returned from a six-year port switch to Sasebo, Japan, while becoming the command ship for Navy Expeditionary Strike Group Seven.

RELATED: 21 hospitalized with injuries from fire, explosion on USS Bonhomme Richard at Naval Base San Diego