Guiding Hands School has decided to surrender its Nonpublic Schools Certification amidst the turmoil that resulted following the death of a special needs child.

Guiding Hands School has decided to surrender its Nonpublic Schools Certification amidst the turmoil that resulted following the death of a special needs child.

The school will close for good on Jan. 25, according to a press release issued by a school spokesperson. Located in El Dorado Hills, Guiding Hands School is a private school for students with special needs. Approximately 120 students attended the school from 22 school districts across the region.

Max Benson, a 13-year-old child with autism, died in November 2018 after being restrained by staff after they say he became violent.

On Monday, a spokesperson for the school issued the following statement on their decision to retire their certification:

“It is with a heavy heart that we announce that on January 17th, Guiding Hands School (GHS) notified the California Department of Education (CDE) of its decision to retire its Nonpublic Schools Certification and close its doors effective January 25, 2019.

Though GHS categorically denies the allegations asserted by the CDE in its premature Notice of Revocation, the decision to surrender our certification is in the best interest of and for the benefit of our students, their parents, and our staff.  This decision allows another Nonpublic School the opportunity to take over the GHS facilities and property, hire GHS former staff and, most importantly, allow many of the GHS students to return to the same loving environment which they called their second home.

We have been operating for 25 years with an unblemished record with the CDE and had repeatedly been commended for our compliance with the Education Code, with CDE regulations, and for our dedication to the education of students with special needs. This commendation by the CDE specifically recognized the occasional necessary use of physical restraint in exceptional circumstances to protect students and staff. GHS used a nationally recognized and CDE-approved behavioral management program, Handle with Care.

At the recent court hearing, Judge Sueyoshi determined CDE violated state statutes by issuing a Notice of Revocation without providing any due process rights to GHS and without providing any support for the Notice. However, the short stay granted by the Court was not enough to save the school for the students or staff.

Many Districts, students and parents chose to stay with us over these last few weeks and we cannot express our heartfelt gratitude enough for their faith in GHS staff, the school, and program. But understandably, many parents and Districts need a level of security which the two-week stay could not provide. In the end, our loyalty is to our students, parents, and devoted staff, to offer them the opportunity to obtain security and stability.

We want to thank our students and parents for the support, love, and faith they have given to us over the 25 years we have been educating students with special needs. We’d also like to thank our dedicated staff – without them, GHS could not have been successful for so long.  Finally, we’d like to thank everyone who has helped GHS over the last 25 years - it has been a wonderful journey.”

A judge has just decided to allow Guiding Hands School to keep its certification while the California Board of Education continues its investigation into the death of a student.

This comes after an appeals hearing, Friday, in Sacramento Superior Court.

On Thursday, ABC10 reported the California Board of Education revoked the certification for the El Dorado Hills school following the death of special needs student Max Benson.

Benson, 13, died after being restrained by staff at the school last November.

An attorney for Guiding Hands School issued a statement.

"It is in the best interest of our students with special needs for the school to remain open at least through the end of the school year."

Approximately 120 students attend the school from 22 school districts across the region. 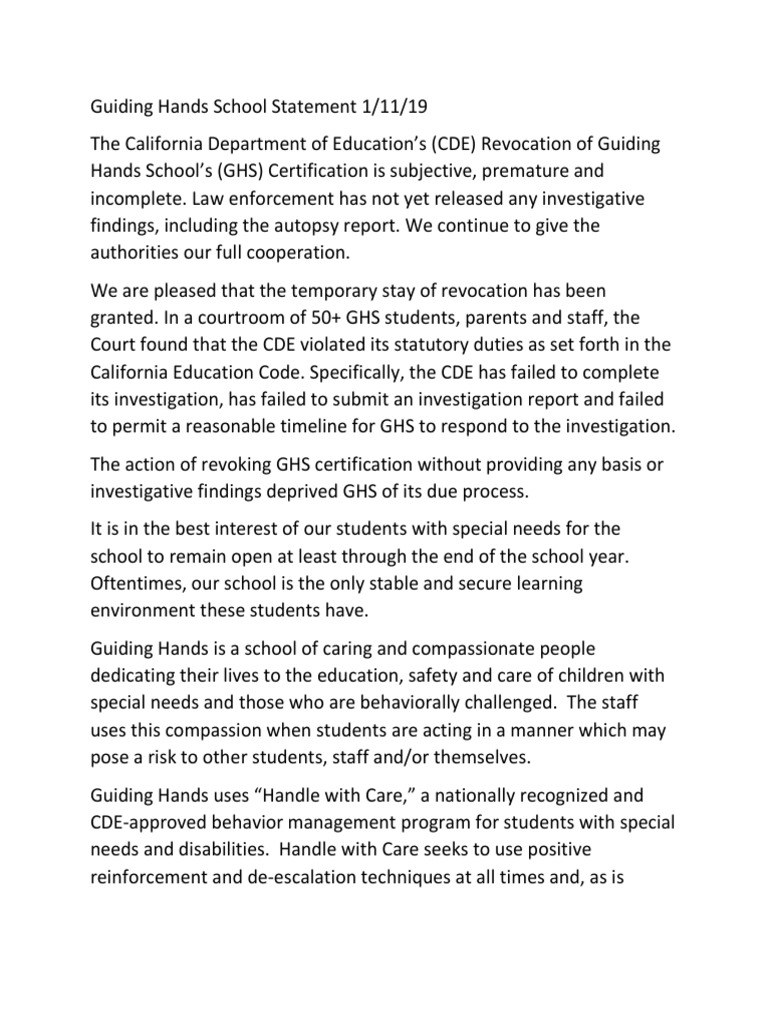 The California Board of Education stripped an El Dorado Hills school of its certification after a special needs child died in its care.

Max Benson, a 13-year-old child with autism, died after being restrained by staff after becoming violent at the Guiding Hands School in November 2018. His death brought together hundreds of community members in support of the family and many condemning restraint practices.

Guiding Hands is a private school for special-needs students. Children from 22 public districts across the region go to the school.

Max’s family tells ABC10 they are happy with this decision, though, according to their lawyer Seth Goldstein, they hoped it would happen sooner.

"The most important part of course is to insure the protection of the students that are there," Goldstein said.

In a letter to those schools, the Board of Education announced that it is stripping its certification for several legal violations, including the use of excessive force during restraint.

Without the certification, some 120 special-needs students that attended the school will now need to transfer elsewhere.

In a video posted to Facebook, Guiding Hands student Bailey Hanes, 18, pleaded for the California Board of Education to reverse its decision to revoke the schools certification.

Her father Chad Hanes says the decision to close will be detrimental to his daughter and her education.

Guiding Hands School spokesperson Cynthia Lawrence called the decision premature and one that is not in the best interests of the 120 special needs students that attend the school.

"We sought stay of the revocation which contained no factual findings and by CDE’s own admission was incomplete," Lawrence said in a statement.

The school is now seeking to appeal the decision, however, officials say it will remain closed during that process.

The state board of education has not yet released the findings of the investigation into Benson's death.

WATCH MORE: How Stockton became the official home of the Fantastic Four