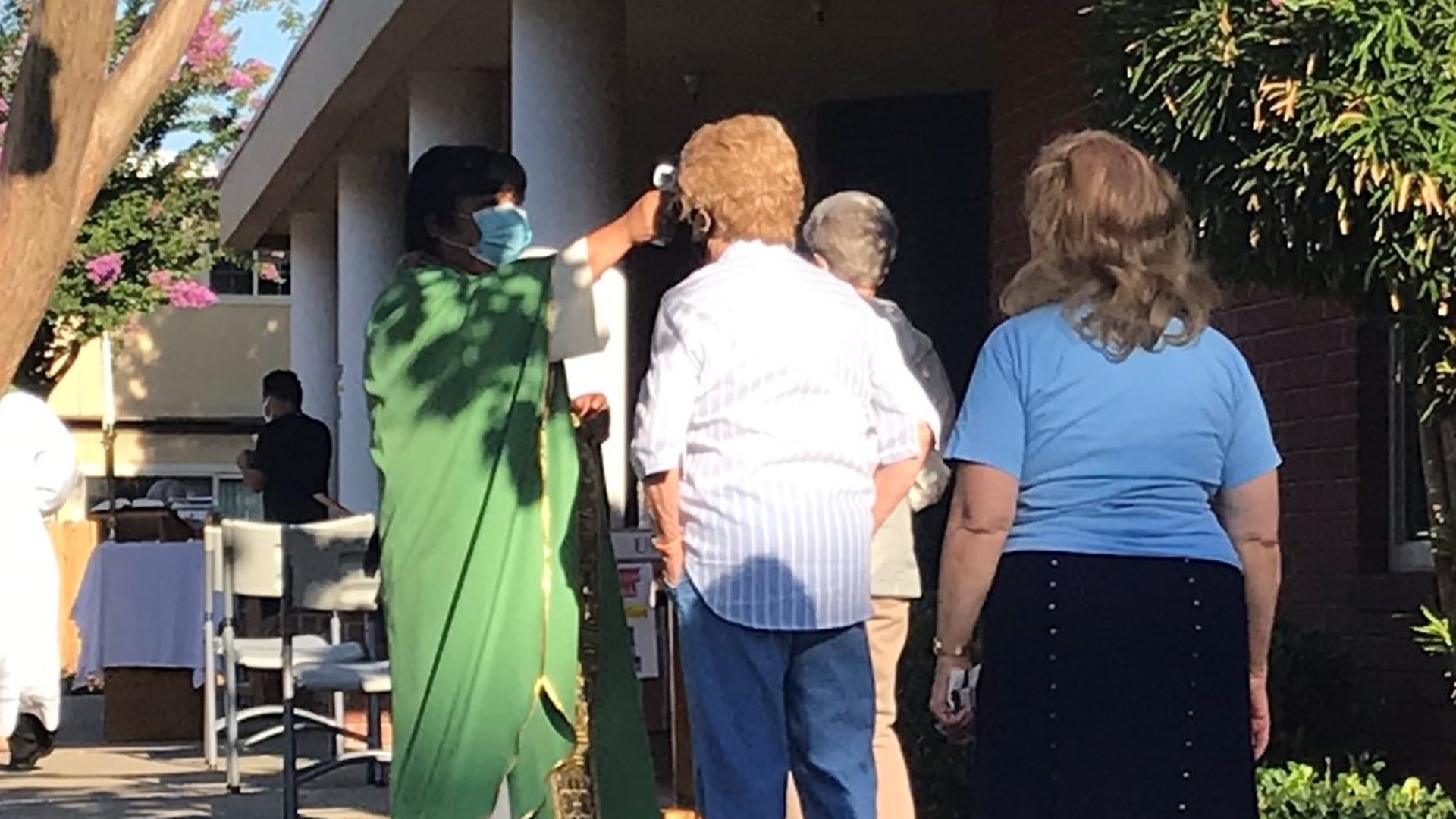 SACRAMENTO, Calif. — St. Robert Catholic Church in South Sacramento is doing something other parishes may have to do in the coming weeks: hold mass outside.

"It's really a reliance on the grace of God that we continue to do what we're supposed to do, what we're called to do, and at the same time, do every human way to keep ourselves healthy and safe," said Father Brian Atienza of St. Robert Catholic Church in South Sacramento.

California houses of worship are having to find ways around Governor Gavin Newsom's recent orders for them to close, along with many other indoor services, as the state's coronavirus cases surge.

At St. Robert, that's what they're doing.

Father Atienza said while standing on the steps leading up to his church that chairs are set up more than six feet apart, masks and temperature checks are required and everyone must sign in just in case contact tracing needs to be done, in the event that a parishioner tests positive for coronavirus.

"I would not deny there is a level of fear inside of me," Father Atienza said, adding that it's difficult allowing parishioners inside of the church, because "I don't know where they have gone, and they don't know where I have been myself."

Churches like this one are adapting in similar ways all over the state.

Chandler Marquez, a spokesman for the Diocese of Stockton, said that it's unprecedented what the church has to do in order to hold mass, but they're adapting.

The Diocese of Stockton plans to do the same thing St. Robert has done starting on Sunday.

"We're just following the directives. It wasn't said that we couldn't do outdoor services, and we're going to do what we can," Marquez said.

But you'll notice, the person-to-person contact — receiving a piece of bread, known as the Eucharist — is still happening. But instead of placing the bread on a person's tongue, parishioners will instead receive the bread by hand.

"I'm sure there's a level of concern for people receiving it, but it's a part of our Mass and it's what we have to do," Marquez said.

Still, they say for them, moving the services outdoors means first communions, baptisms, funerals and weddings can still continue in these uncertain times, as long as they are capped at 100 people.

In the event that someone tests positive, everyone on the sign-in list will be notified, the priests will go into self-quarantine and outdoor Mass will be suspended for the time being.

"Community and faith is what we're all about and we need it now more than ever," Marquez said.