"I think we hear with the coronavirus [that] healthcare workers are in demand and you should be on the frontlines... I never thought I'd be filing for unemployment." 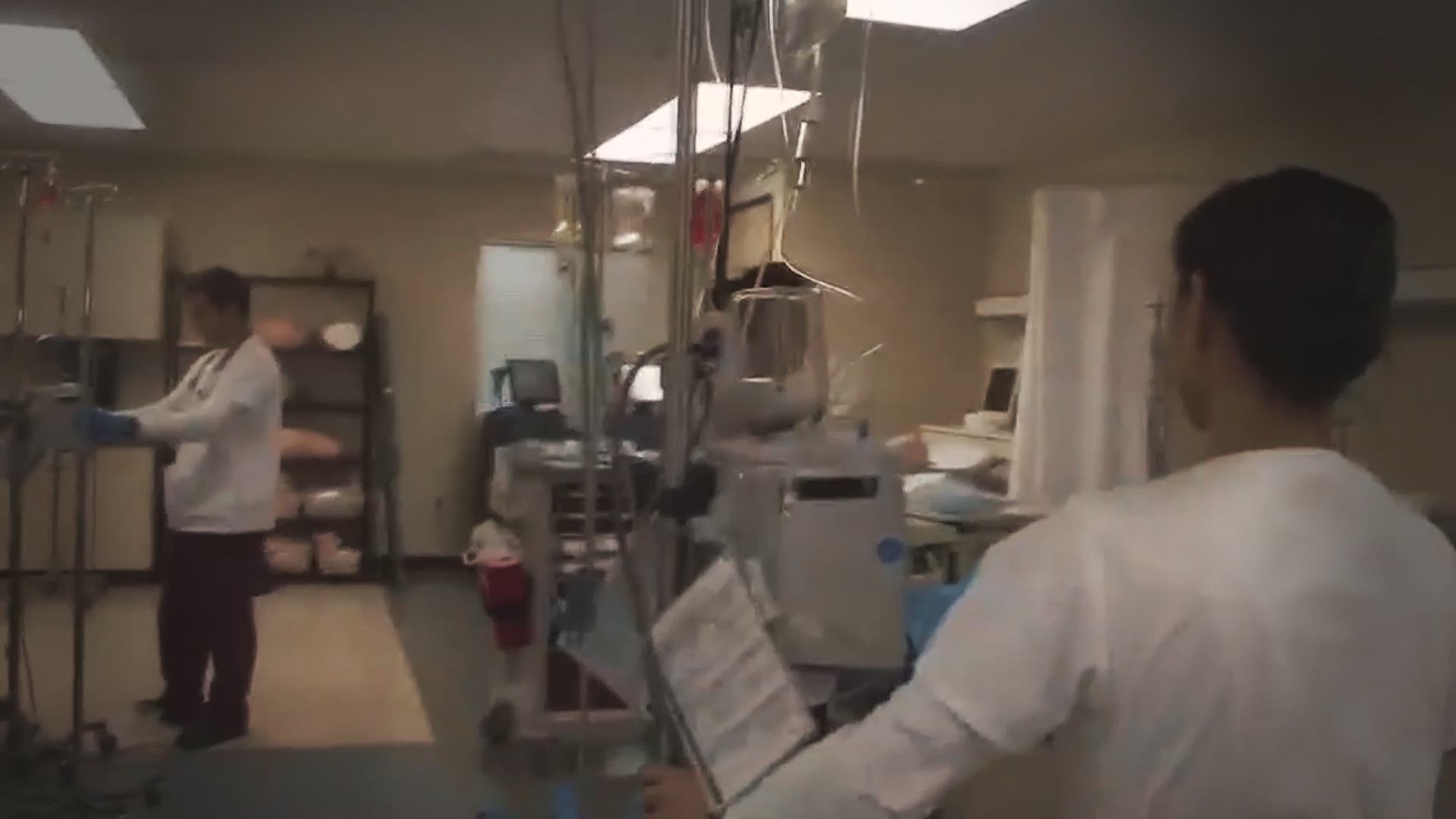 SACRAMENTO, Calif. — In a time when medical professionals have been called to the frontlines and are being deemed as heroes, many are also being laid off.

"Shocked is one way to put it," said Sarah Cerrona. "I think we hear with the coronavirus [that] healthcare workers are in demand and you should be on the frontlines... I never thought I'd be filing for unemployment."

Cerrona is a certified pediatric nurse practitioner who was laid off amid the coronavirus pandemic. Out of concern of retaliation, she agreed to share her story as long as we didn't include the name of her employer - but she described it as a large and well-known hospital in the Sacramento region.

That's why when the coronavirus pandemic first began impacting the United States, she was ready to face the frontlines.

"I even joked about it with my husband," Cerrona recalled. "I said, 'Well, I'm so glad we don't have to worry about our jobs,' and I literally ate my words two days later."

Cerrona said after the pandemic began, the patient load in her hospital dropped more than half. She was first told to not come in due to a lack of patients, then she was later told to file for unemployment.

She said although it was shocking, she is happy to spend time with her own children during these trying times. But she's not alone in having a medical background go unused.

California hospitals have been hit hard financially, not necessarily by a coronavirus surge, but more so because of a lack of patients. California Hospital Association CEO/President Carmela Coyle said that's because Californians have done a good job staying home and flattening the curve, but it has impacted the hospitals in a different way than they were expecting.

"Hospitals, first and foremost, have been focused on the right things and that is caring for each and every patient that is in front of us. But what it meant to be able to prepare for this crisis is that hospitals had to empty their facilities... we had to empty emergency departments [and] beds to make way should we need to care for COVID positive patients," Coyle said.

But California didn't see a surge in coronavirus patients like other states such as Louisiana and New York. While that's good news, the empty beds have cost hospitals billions.

The California Hospital Association said hospitals in our state are now $10 to 15 billion in debt. They estimate during every month of the pandemic, $2 to 3 billion are lost.

"Just like other businesses in the economy -- restaurants, movie theaters, retail stores -- hospitals get paid for every patient that they treat. But unlike other businesses in the economy, we couldn't turn out the lights and go home. We had to be there, ready, in the event that there was a COVID surge," Coyle said. "So not only did our revenue decline, but our costs remained and, in fact, increased during this COVID period."

That's why the California Hospital Association "sounded an alarm bell" to state leaders. They're asking state leaders for "immediate financial support" by requesting $1 billion in financial relief before the end of the fiscal budget year, which concludes on June 30. Then asking for another $3 billion in the new fiscal year, which they hope will be matched dollar by dollar from the federal government in order to help alleviate the financial burden the coronavirus has caused.

"This will have a financial impact for a far longer period of time," Coyle said. "What's happened to a hospital is we've taken their financial securities and really ruined that record. So for hospitals over the longer term, they don't have the cash on hand that they need."

RELATED: An inside look at what it's like for healthcare workers during coronavirus pandemic

But ensuring hospitals have the cash they need to remain open isn't just for the public health, it's also to help keep our economy healthy.

According to Coyle, hospitals are one of the largest private sector employers in California and are responsible for around $260 billion in contributions to the economy. She said helping hospitals is the best and easiest way to both restart and keep our economy going.

"We employ half a million people [and] hospitals create over 1.2 million jobs," Coyle said.

Yet, hospitals are having to furlough and lay off employees despite California slowly re-opening and Newsom dedicating his first move in the re-opening process to allowing essential surgeries.

And it's not just hospitals that are hard hit, the medical field in general is feeling an impact from the pandemic - especially private and family run practices.

"It's like a small business," said California Medical Association President-Elect Dr. Lee Snook. "If your practice goes away, you're pretty much diminished."

In fact, the California Medical Association said a survey they did of 3000 physicians conveyed that half of the doctors had to furlough or lay off employees and that 80-percent of small practices reported their revenues declining by mid-March.

"There's been a lot of hurting docs out there and oddly at a time when physicians are in need," Snook said.

Doctor Christopher Price runs his own practice in Sacramento. Because of a loan from the Paycheck Protection Program, he's able to keep his staff working for the most part. But he's worried about the coming months.

"That's the scary part. Our (client) volume is down and if you're down 10 to 20-percent volume, basically you're working for free. You can't work. Your business cannot survive."

A huge part of the lack of patients in hospitals and doctors offices alike is due to a fear of having a higher chance of contracting COVID-19. But health reasons patients typically turn to medical professionals for hasn't gone away.

"We are deeply concerned for people who are postponing services that will result in them getting even sicker later," Coyle said.

"I've had people with chest pains not come in and then it's days later and they finally come in," said Price. "That's a big issue."

That's why many doctors are getting creative. Smaller run physicians have resorted to "telehealth" or appointments by phone and video call.

"The way I look at it is it's an opportunity for us to shake things up and work outside our comfort zone," said Snook.

These doctors had to step outside their comfort zones quickly in order to continue seeing patients when the pandemic first hit. Dr. Price said he switched to taking appointments on Skype, Zoom, FaceTime and over the phone within days.

But doctors are concerned that not being able to see patients in person heightens the possibility of missing physical red flags.

"I'm not going to be able to hear that heart arrhythmia that developed since they last came in," said Price.

That's why they're trying to reassure patients that they're taking every precaution in keeping their offices clean and safe.

"I want to reassure the public that the safest place to be right now is in your doctor's office," said Snook.

In the meantime, the California Hospital Association and medical professionals alike hope the state and federal government will ease the burden of the billions in debt they're currently in, especially those medical experts spending this pandemic at home.

"If hospitals do get extra money from the government to help them during this difficult time, I hope they're able to use it to help nurses and doctors return to work and to support the community and public health at large," said Cerrona.

"I think the bottom line message is that hospitals were there to protect California, now is the time for California to protect hospitals," said Coyle.