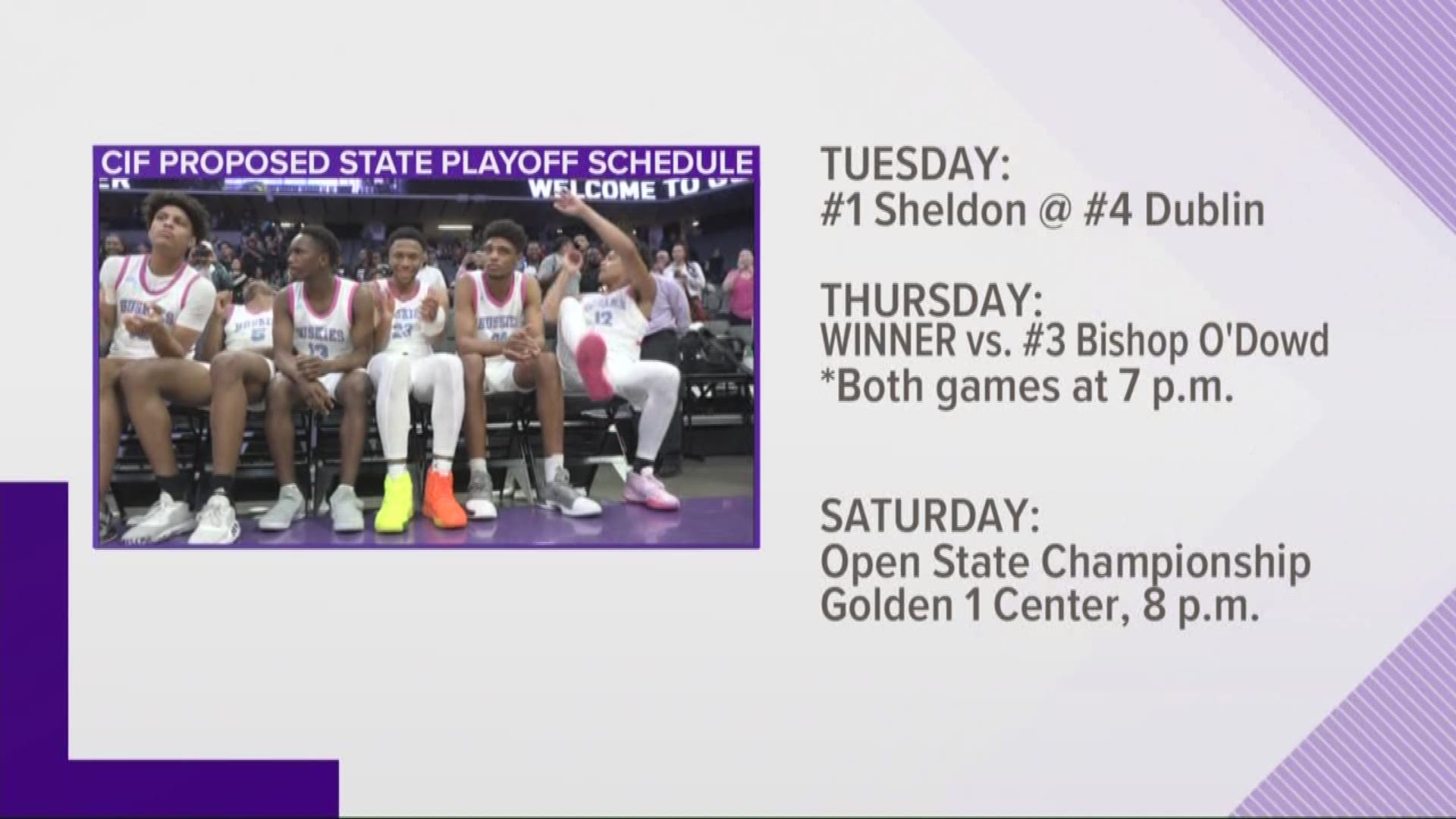 The governing body of sports in California issued a proposed schedule that would allow the Sheldon High Huskies to continue in the State playoffs while keeping the remainder of the tournament on track for this weekend's State Championships, pending an update from the Elk Grove Unified School District.

The school district is awaiting the results of Elk Grove Unified School District students', staff's, or volunteers' results to come back before telling Sheldon they can further play in the tournament. Xanthi Pinkerton, a spokesperson for the district, said this decision is for the health and safety of the players.

"Let's hope we can see our students play in something they have worked so hard for," Pinkerton said.

The NorCal and SoCal champs meet for the Open Division State Championship at Golden 1 Center on Saturday, March 14, at 8:00 p.m.

The CIF notes that if Sheldon is unable to continue, then Dublin and Bishop O'Dowd would play on Tuesday, March 10, or Wednesday, March 11, depending upon the response of EGUSD.

Pinkerton added that not all tests have been performed and that the district is hoping for rapid test results from the county.

The Sheldon High School basketball team was preparing to make a run at its third consecutive CIF State Championship game appearance when concerns about the spread of coronavirus hit the EGUSD.

In a stunning move, Northern California's largest school district announced Saturday that it was canceling all classes and school activities across all campuses from March 7 - 13 to prevent the potential spread of the coronavirus.

It's important to note that no EGUSD student or staff has tested positive for COVID-19; it's a family member diagnosed with the coronavirus according to the district.

The EGUSD's decision to close for the week came just hours before Sheldon was set to host Dublin in its first game of the CIF State Playoffs.

The Huskies earned a bye week after winning their second straight Sac-Joaquin Section Championship in Division I at Golden 1 Center on Feb. 28.

The district's decision to cancel all school activities effectively forced the Sheldon basketball team to withdraw from the CIF State playoffs.

The Huskies, the number one team in the Open Division of the CIF Northern California Basketball Playoffs, would not be able to play their game against No. 4 Dublin for a spot in the NorCal Regional Championship Game.

The CIF, meanwhile, planned to continue initially with its set schedule of games leading up to the State Championships at Sacramento's Golden 1 Center.

Members of the Sacramento community heavily criticized the district's decision on social media. Sacramento Kings big man Marvin Bagley, whose younger brother Marcus is a senior on the Sheldon squad, was among the district's critics following the decision.

Credit: Lina Washington
Sacramento Kings big man Marvin Bagley, whose younger brother Marcus is a senior on the Sheldon squad, was among the district's critics. Bagley criticized the EGUSD's decision to cancel all classes and school activities across all campuses from March 7 - 13 to prevent the potential spread of the deadly Coronavirus.

In a new conference full of Sheldon basketball players and their families held on Sunday afternoon, a Sacramento county official said he was planning on speaking with the CIF to go over guidelines would be on potentially having the team play. Sheldon's game against Dublin would have to be held by Monday, March 9, to keep the CIF's remaining schedule intact with the Regional Championships set to be held on Tuesday, March 10.