The CDC has recommended against events with 150 people or more, prompting event cancellations from the Old Sacramento St. Patrick's Day Parade to March Madness. 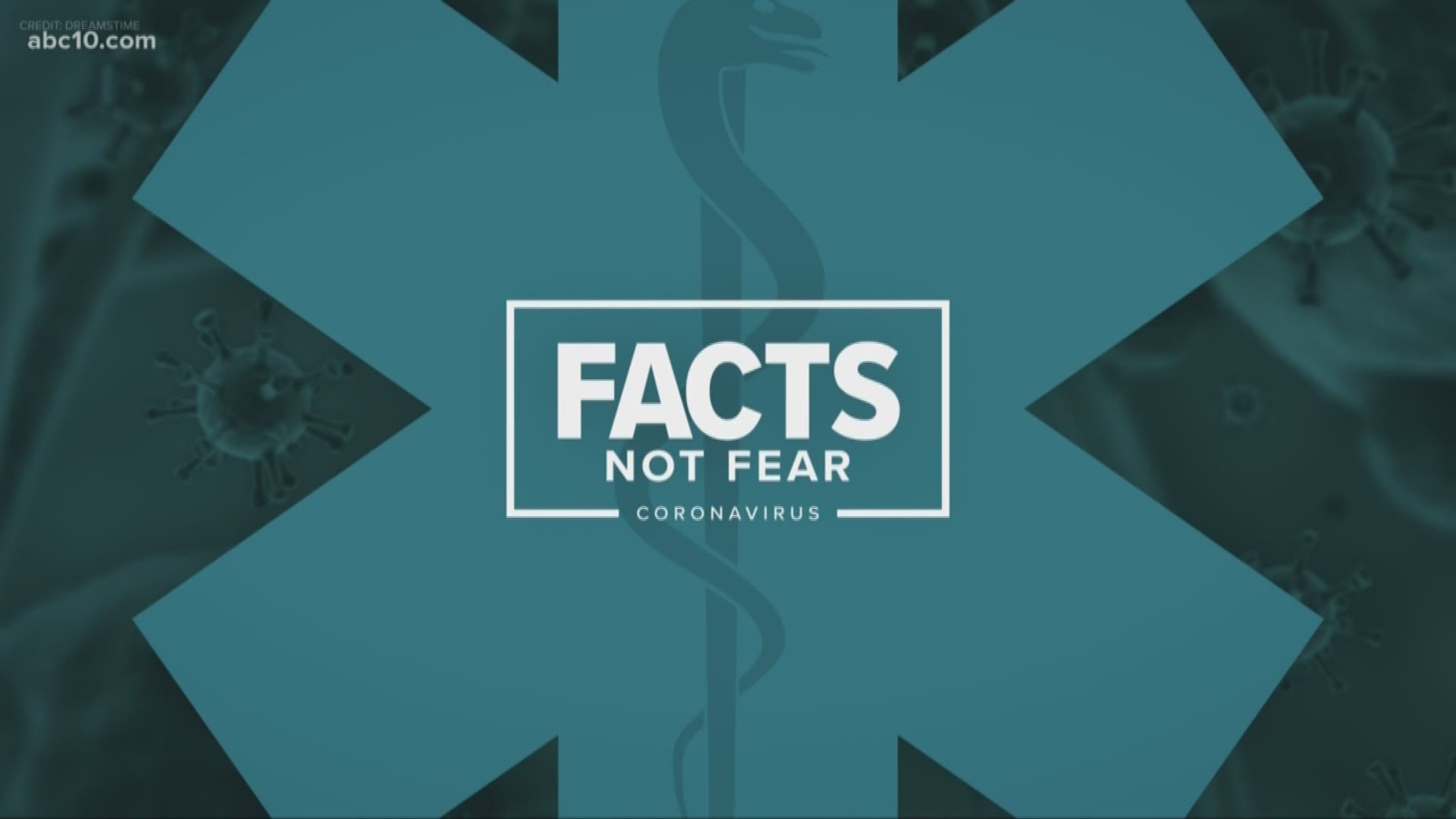 SACRAMENTO, Calif. — This is a developing story. We will continue to update this list as more information becomes known. If you have an event that has been cancelled that is not on this list, please email desk@abc10.com.

With the coronavirus [COVID-19] spreading across the country, some agencies and cities are taking proactive measures to limit person-to-person contact and "flatten the curve" of infection.

Reports of event cancellations have been flowing in across California as the CDC urges against mass gatherings, including events, concerts, festivals, conferences, worship services, and sporting events.

Here are some local and nationwide events that have been canceled in the wake of coronavirus concerns:

The Sacramento Zoo announced Friday that it's temporarily closing to visitors through at least March 31.

The city of Lodi announced it's canceling or postponing parks, recreation and cultural service sponsored public events and activities like:

The Park Ultra Lounge will be temporarily pausing operations until April 3.

The city of Fairfield cancels all events at city facilities

The city is canceling/postponing all scheduled events, rentals, program, classes, preschool and after school programs at city facilities through March 31.

On Thursday morning, organizers of the parade announced that the festivities planned for this Saturday are cancelled. However, many businesses, bars and restaurants will remain open for Sacramentans to ring in St. Patrick's Day all the same.

The Comic Con has been postponed until June 7. Anyone who cannot make this new date can get a full refund.

The local theater company has canceled all performances for the month of March. Performances are expected to resume in April.

The show, set for tonight, has been postponed, with new dates coming in the future.

Originally scheduled for March 28, this concert will be rescheduled for Aug. 8, but guests can also receive a refund at the original point of purchase.

While Jojo Siwa's show has been postponed, organizers have already announced a new date of June 14.

The two shows featuring a Conversation with Michelle Obama originally scheduled for April 1, have been postponed to a later date that has yet to be determined.

Cher's concert has been rescheduled for October 14.

Celine Dion's concert originally scheduled for April 7 has been postponed. Make up dates will be announced at a later time.

Lauren Daigle's concert has been rescheduled for October 13.

The three stages at Folsom Lake College will be empty this month as the college has cancelled all shows through the month of March.

Scheduled for March 19, the event is currently postponed, with new dates set to be announced "in the near future."

The 28th annual Murphys Irish Day celebration, scheduled for March 21, has been canceled. The Murphys Business Association has begun implementing measures to minimize risk and manage visitors this St. Patrick's Day, despite the event being canceled.

All events in city of Manteca

In a press release, the city explained that all events within city limits would be postponed or cancelled for gatherings of 250 or more people.

The City of Elk Grove announced it will postpone some events scheduled through the end of March, including the Peace and Love Music Festival.

The Nor Cal Flower and Garden Show @ Cal Expo

The Nor Cal Flower and Garden Show, which was scheduled for April 2 to 5, has been canceled and will not be postponed. Instead, organizers urge attendees to join the show next year, April 8 to 11, 2021.

Announced it would be postponing until Oct. 1 to 3, 2020. According to its newsletter, the promotions team that runs the festival has been in contact with Cal Expo, which recently cautioned them to cancel this event.

Originally scheduled for March 17 - 22, the film festival has been cancelled. Because of the significant impact this will have on the arts event, SLO Film Festival is asking festival-goers to consider converting their festival passes and tickets into a donation.

The 5th annual H2O Hackathon in San Joaquin has been postponed until a later date, TBD.

Sunrise Mall announced the Midway of Fun Carnival, which was originally scheduled for March 13 - 22nd will be rescheduled, TBD.

The NBA suspended the season after a player was diagnosed with COVID-19. It is unclear when the season will continue.

The River Cats announced on Twitter that the exhibition game planned for March 22 will be postponed. The team in currently working on alternative arrangements.

Following an announcement from the United Soccer League, all match play has been suspended.

Originally scheduled for this weekend, the little league opener has been cancelled while all other little league events are postponed until further notice.

The American Hockey League suspended play of the 2019-20 season, effective immediately. That means that the Heat home games this weekend against the Colorado Eagles will not take place as originally scheduled.

This Half Marathon, 5K, 10K, and Leprechaun Dash, scheduled for March 14th and 15th, has been postponed.

San Francisco announced a ban on all mass gatherings, meaning that sports games were effectively canceled, including the SF Giant exhibition game. The SF Giants are working closely with Major League Baseball and local health and government agencies to monitor for the potential impacts of COVID-19 and are looking to finalize alternative arrangements. There are no other large public gatherings scheduled at Oracle Park.

Disneyland Park and Disney California Adventure has closed following Governor Newsom's executive order. Guests currently staying at the resort will have to make necessary travel arrangements before March 16, while those who bought tickets for a later date will have to work with Disney to receive a refund.

Despite reports that Division I men's and women's tournament games would continue, just without fans present, the NCAA cancelled all remaining winter and spring championships. Talk about March Sadness.

The DNC has decided to forgo an audience at this weekend's presidential debate. Though Joe Biden and Bernie Sanders will continue with the debate, the venue will have no audience members, press filing center, or spin room.

MLB has cancelled the remainder of Spring Training games, while the 2020 regular season will be delayed by at least two weeks.

The city of Austin announced the cancellation of SXSW, making this the first time in 34 years that the March event will not take place. There is no news on whether alternative dates will be announced.

Originally scheduled to take place in April in Riverside County, Coachella will be postponed until October. All purchases for the April dates will be honored with the rescheduled dates, while those who cannot attend in October will be notified of receiving a refund.

Carnival Miami, which runs the music festival, has announced that Calle Ocho will be postponed to a later date.

This Seattle-based Comic Con event has been postponed until further notice. Reedpop, which runs the event, is working with Visit Seattle and the Washington State Convention Center to secure alternate dates for this summer.

According to the CDC, coronavirus (COVID-19) is a family of viruses that is spreadable from person to person. Coronavirus is believed to have been first detected in a seafood market in Wuhan, China, in December 2019. If someone is sick with coronavirus, the symptoms they may show include mild to severe respiratory illness, cough, and difficulty breathing.

Currently, there is no vaccine; however, the CDC suggests the following precautions, along with any other respiratory illness:

WHY HEALTH OFFICIALS ARE SO CONCERNED

Some people have compared the low overall death toll to the flu's high annual death toll in the United States as a reason not to be concerned about COVID-19, however, doctors and health officials are concerned for three main reasons:

Dr. Payal Kohli, a cardiologist & doctor of internal medicine, spoke with ABC10's Walt Gray about the novel coronavirus, those most at risk, vaccine timeline, & more.