The crowd gathered to protest the stay-at-home order said they believed its impact on the economy is more dangerous to lives than the coronavirus. 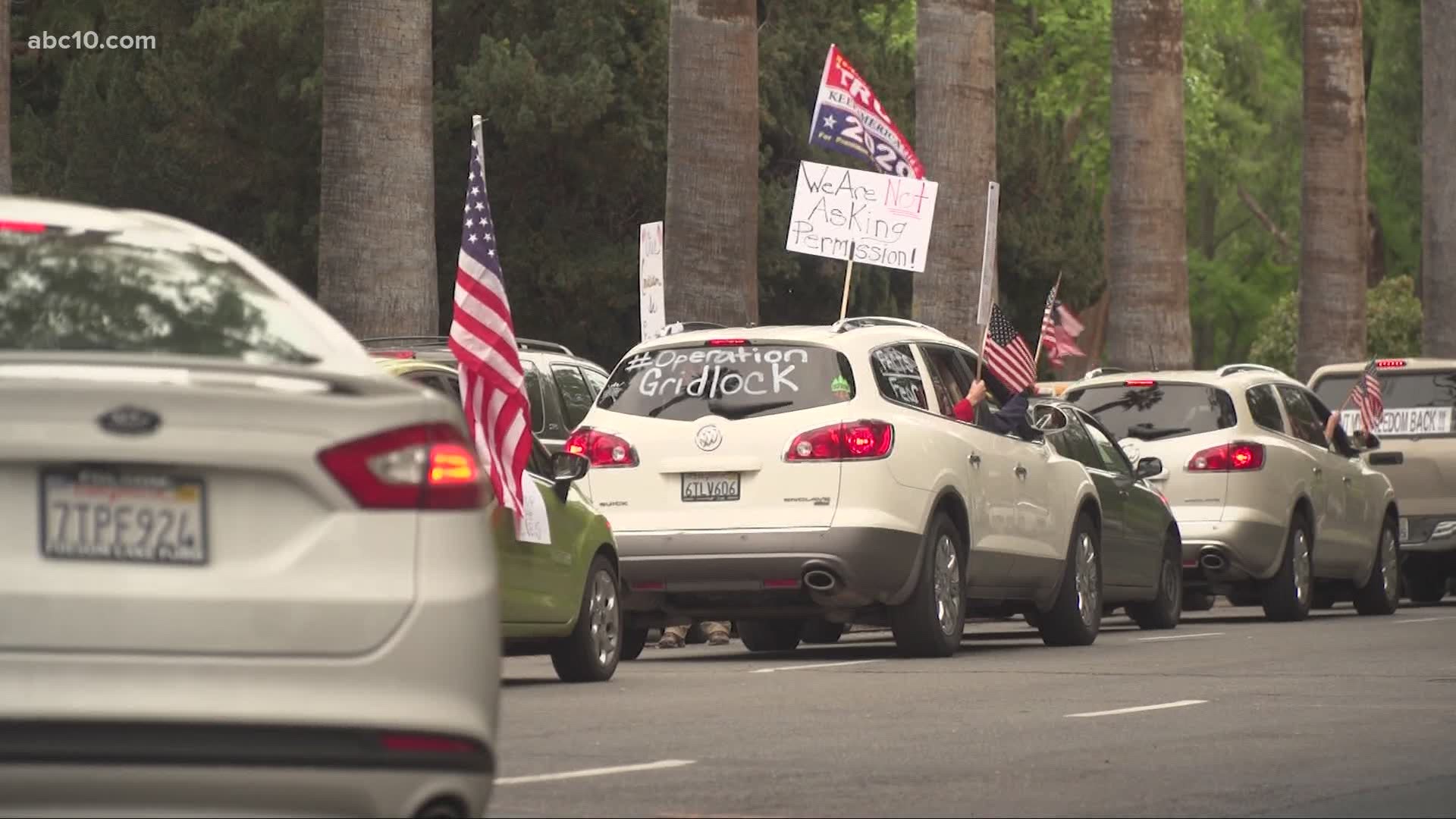 SACRAMENTO, Calif. — Hundreds of demonstrators gathered at the California Capitol on Monday morning to protest the state's stay-at-home order less than a week after Sacramento County law enforcement agencies announced they would fine those who break social distancing.

Crowds across the country have been protesting stay-at-home orders because they say they believe its impact on the economy is more dangerous to peoples' lives than the coronavirus.

Gov. Gavin Newsom said at a press conference that the worst mistake Californians could make to put peoples' lives at risk by making decisions on frustrations that they are facing.

"There are many other parts of the globe that precipitously did move forward by opening up their economies again because of that frustration and that angst, only to see that they had to pull back again," Newsom said. "Singapore being an example of that. Components of what China has opened up, they have now closed again for that reason."

Officer Rick Turner with CHP's Capitol Protection Service responded to ABC10's request for comment Monday evening, saying today's protest will cause the CHP to reevaluate issuing permits for events at the Capitol during this time, albeit on a case-by-case basis.

Permits the CHP issues for gatherings on Capitol grounds, he said, are "to provide a safe environment for demonstrators to express their views."

However, he added, "that's not what occurred today. The CHP will take this experience into account when issuing permits for this group or any other group.”

The permit for Monday's protest was issued with the understanding that people would participate in a manner consistent with the state’s public health guidance, Officer Turner said, but some protesters got out of their vehicles and gathered in crowds, without practicing social distancing or wearing face coverings.

The CHP made no arrests and issued no citations at Monday’s demonstration, Turner said.

Another protest against the state's lockdown is pending permission for Wednesday. The permit for this event says 70 people are expected to participate by holding a "driving Protest around Capitol building to protest Newsom's excessive stay at home order," according to the CHP’s website.

ABC10 asked if that event's permit would be reevaluated in light of what happened Monday.

“We’re definitely going to take it on a case-by-case basis,” Turner said. “We’re going to learn from this experience.”

Robert Corbin, who protested the stay-at-home order, told ABC10 that he did not think he was putting anyone in danger for not wearing a face mask or maintaining social distancing.

"I believe that this is a free county, and I don't let others make a decision for me being an adult," Corbin said.

Newsom did not say why the CHP approved the permit and said he would leave up to the agency to answer that question. ABC10 reached out to CHP officials for comment but have not received a statement as of publication.