Health experts 'learning a lot, day by day’ about coronavirus and kids. Here's what they know for sure.

From ICUs, hospitalizations, deaths, and a 90% surge in kid coronavirus cases, health experts cement what they know and what they’re still waiting to find out. 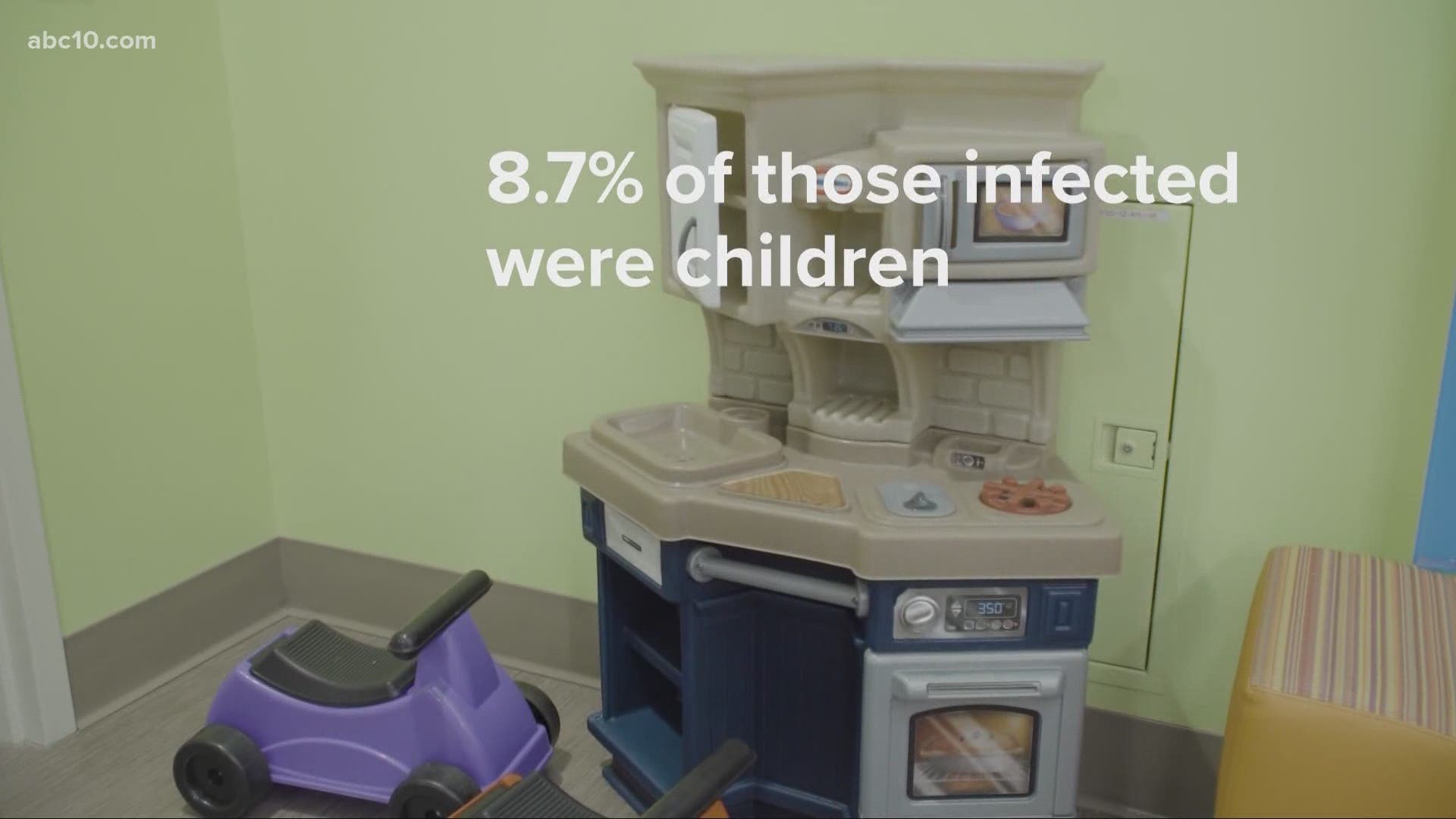 CALIFORNIA, USA — As distance learning ramps up in schools across California due to a surge in coronavirus cases, health experts continue to learn more about the virus and its impact on children.

There’s still a lot to learn, but when it comes to matters like hospitalizations, ICU visits, deaths, and underlying conditions, health experts said that information is finally coming around.

How does coronavirus impact children?

Both hospitals acknowledge that the coronavirus does have an impact on children. Dr. Nael Mhaissen and Valley Children’s Hospital know that reality all too well. Despite their best efforts, the first pediatric death in California happened in their hospital system.

“That is unfortunate that we’ve had the one and only pediatric death so far in California among children related to COVID-19, but that again highlights the significance of this disease among children,” Dr. Mhaissen, Medical Director of Pediatric Infectious Disease for Valley Children's Hospital, said.

The death is one of 90 among children in the US as of August 11, Mhaissen said. Usually, children are expected to be asymptomatic or show mild symptoms.

Dr. Dean Blumberg, Chief of Pediatric Infectious Diseases at UC Davis Children’s Hospital, said children are about half as likely to be infected when exposed to the virus in comparison to adults. He added even though children are less likely to get serious disease from the coronavirus, the virus isn't something that can be written off for them. Children still have the ability to get serious disease.

“Children have died from this, and we’ve had children in the ICU because of this, so it still may be serious in children,” Blumberg said.

Mhaissen added children can also have a severe inflammatory response to the virus that can impact several organs and cause shock syndrome or multisystem inflammatory syndrome in children [MIS-C] two to four weeks after the infection. He said it’s a unique presentation in children that people don’t necessarily see in adults.

“Once again... the rate for these infections are much lower than other age groups particularly when we talk about the elderly, however they are still seen," Mhaissen said. "They are still causing significant burden on health care resources.”

Where is all the information on ICU visits, underlying conditions, and deaths?

However, “cases” is just one part of the story. Mhaissen was quick to note that the 90% increase also happened during a period with a roughly 60% increase across all ages.

“All numbers are important, but there isn’t a single number that will tell you the entire story," Mhaissen said. "So, the testing positivity rate is important. The number of total cases is important. The number of hospital admissions, confirmed deaths related to COVID-19, each one of these numbers will actually tell you a different story and will give you a better idea of how the transmission is looking like.”

He added that even the cases without symptoms still have relevance to the coronavirus conversation because of potential spread from children.

As far as data on ICU visits and underlying conditions, Blumberg said this information is now starting to appear.

“I think we’re just starting to get that data,” Blumberg said. “The CDC recently published a series review of children that were hospitalized with COVID… and about a third of them ended up being in the ICU - requiring ICU level care and about 40% of children in this series ended up having underlying disorders like obesity or lung disease that likely resulted in more severe illness.”

Why would one study be better than another?

Blumberg and Mhaissen have read and heard of plenty of studies. It's not uncommon for people to find a study that reveals something about the virus while another person finds a study that claims an entirely different point.

For Blumberg, he sees more statistical reliability in studies that have a larger number of people and complete data sets. Likewise, he believes US data will likely be more applicable to hospital efforts than data from other countries.

“European data is great, but a lot of the European countries have very homogeneous populations, and the US has very diverse populations,” Blumberg said. “So really, the US data applies better to us.”

For Mhaissen, he said a reliable study is about reviewing the collective body of evidence around a certain point. Some studies can be well designed, but others can be weak.

“The results of some [studies] can be generalized to the rest of the community and [with] others the results cannot be generalized like that,” Mhaissen said. “So, once again, it’s not preferring one study over another just because I like its result. It’s really about the collective evidence and the critique of the strength and the weaknesses of each study.”

If the virus has been around for months and infected millions, shouldn’t we know more?

Blumberg said there's been an enormous amount of information gathered in a very short time for an emerging virus. In the beginning, there was a lot of focus on severe cases, which leaned the conversations toward the elderly and adults with underlying conditions.

At this point in time, Blumberg said the attention is now turning to other populations.

“Now, we’re focusing in on children and really being able to take a breath and say what else we should be able to look at,” Blumberg said. “I think we’re learning a lot, day by day, and our recommendations are reflecting that.”

Every emerging infection brings it's own unique questions.

There's still a lot for the medical field to learn. Blumberg shared the following questions with ABC10:

For Mhaissen, he wants to know if there's a medication that will help children get better. He said there is some information about medications in adults, but not as much in children.

Likewise, he's also wants to know whether the vaccine will be safe and effective and he also wants to learn more about the role and efficacy of Personal Protective Equipment for children.

“There are a lot of these differences and nuances to the infection course in pediatric that we still have several gaps in our knowledge... and we’d like to get answers to them as soon as we can,” Mhaissen said.

What are we not going to know for years to come?

Effective therapies for the virus will likely take some time. Blumberg said the hospital has a steroid therapy, the anti-viral Remdesivir, and another involving convalescent plasma. However, others therapies might take a while to appear.

“The other antiviral therapies are very slow to come on board now, so I think that’s going to take a very long time,” Blumberg said.

Immunity will also be lasting discussion in the medical field.

“We really don’t know how long people will be immune after they’re infected or if they’re going to be immune at all, and that’ll just take time. [It could] take months to years to figure it out," Blumberg said.

The coronavirus intervention approaches were top of mind for Mhaissen. He said it'll likely take time to learn what these interventions did to help in the fight against the virus, this includes aspects like staying home from school. While he isn’t levying criticism on the efforts, he does believe these are experiences to learn from.

“I think once we pass this… this deserves a careful look back just to critique the things that we did, what worked, what didn’t work, [and] what is it that we could have done better,” Mhaissen said.