Even though a panic buying wave cleaned out the shelves in stores, there's plenty more food on the way, according to Sacramento County Farm Buearu. 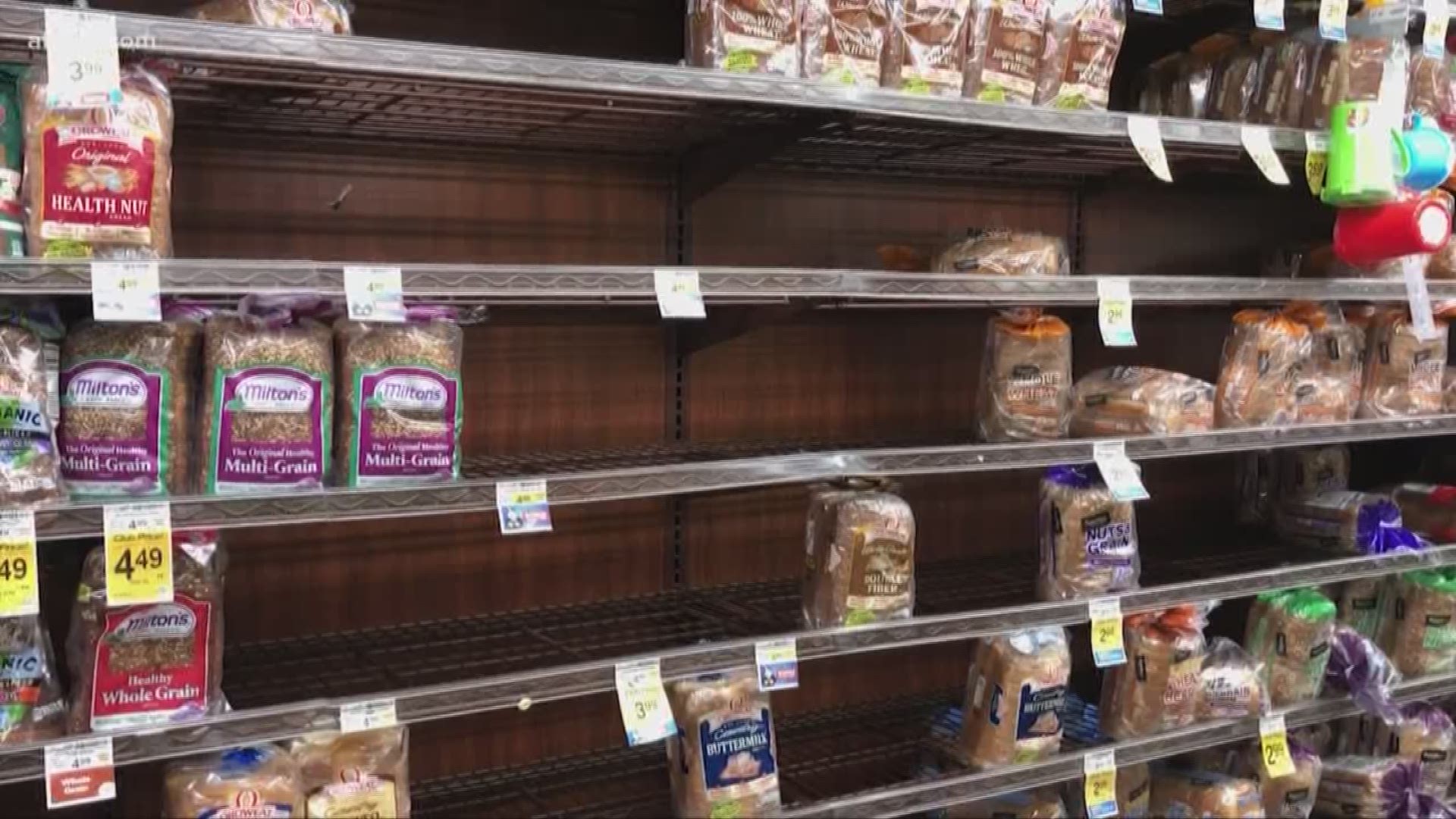 SACRAMENTO COUNTY, Calif. — Empty shelves at the grocery store are no cause for concern, because Sacramento County isn’t running out food any time soon.

“Definitely, we’re not going to run out of food,” said Lindsey Liebig, executive director for the Sacramento County Farm Bureau. “Where the panic is setting in is because we had this instantaneous hoarding mentality, where you had this panic set in of really trying to buy as much as you can. The supply just hasn’t caught up with that yet.”

Growers and retailers are just in a game of catch-up to restock the shelves.

She says growers are being told to keep producing as normal while stores ramp up orders and produce moves as fast as transport can move it.

“Just because it’s not on the shelf right now, doesn’t mean its not available. It just means it hasn’t gotten there yet,” she said.

ABC10 reached out to Save Mart and Raley's regarding how long it takes to replenish their shelves after a panic buying wave, but the message has not been returned.

The California Grocers Assocation said that the grocery industry is already adapting to the consumer demands, stretched supply chains, and workforce conditions. They said the industry is "well-positioned to meet the needs of all Californians."

In an effort to stop the surge of food shopping, Sacramento Mayor Darrell Steinberg urged people to stop hoarding food and only buy what they need. Steinberg assured the public that there is plenty of supplies and the panic-buying need to stop.

Steinberg also mentioned what is being done to help senior citizens who have been urged to not go to grocery stores because they are more vulnerable to the virus.

Steinberg said he hopes to have a plan in place in the next couple of days. He added that there will be a place where the elderly can ask for help, but no further details were given.

Amid all the panic buying, the biggest concern for growers is not a food shortage; it’s food waste. Part of that has to do with Governor Gavin Newsom’s call to close down restaurant dining areas.

It’s a move that can hit more than just the chefs and waiting staff in the Farm-to-Fork Capital. There’s a whole supply chain that feed into the industry, which includes the very farmers who help make Sacramento restaurants “Farm-to-Fork.”

On Sunday, Jot Condie, CEO of the California Restaurant Association, said the situation with restaurants, the governor, and the coronavirus was unfolding minute by minute. When ABC10 spoke with him on Sunday, restaurants were able to operate at 50% capacity, but, by Monday night, that changed to dining area closures and take-out only options.

Farmers are part of the ecosystem of restaurants, and Liebig says the recent closure stands to hit them hard as well – they just don’t know when.

“Because everything is changing so rapidly, we’re not going to see what the full fiscal impact is in all of the supply chains probably for at least a couple months” said Liebig.

If food waste becomes an issue, due to restaurants not ordering or product not moving fast enough, the farm bureau is encouraging growers to partner with food banks or schools to avoid waste.

While grocery stores are categorized as an essential service, Liebig said there's concern over farmers market closing due to coronavirus mitigation efforts. San Diego recently saw a number of their markets close following direction from city officials to prevent the spread of the coronavirus.

It’s something that hasn’t happened in the Sacramento area, but the farm bureau is keeping an eye on it. Many markets see themselves serving the same roles as grocery stores, providing fresh fruit and produce. Despite that belief, the California Department of Public Health identified them as separate from grocery stores but has not indicated that markets should close.

For now, the biggest message the Sacramento city, county and farm officials are trying to put out is that the food supply is still there, limit what you buy to what you need, and help a neighbor where possible.

“Anybody buying more than they need please stop," Steinberg said. "You can see that it has a real impact on your fellow Sacramentans, and we’re all in this together. We will all get through this together."