The mayors said in the three-page letter to Gov. Newsom that if social distancing were continued, "barber shops, hair salons, restaurants and golfing" could reopen. 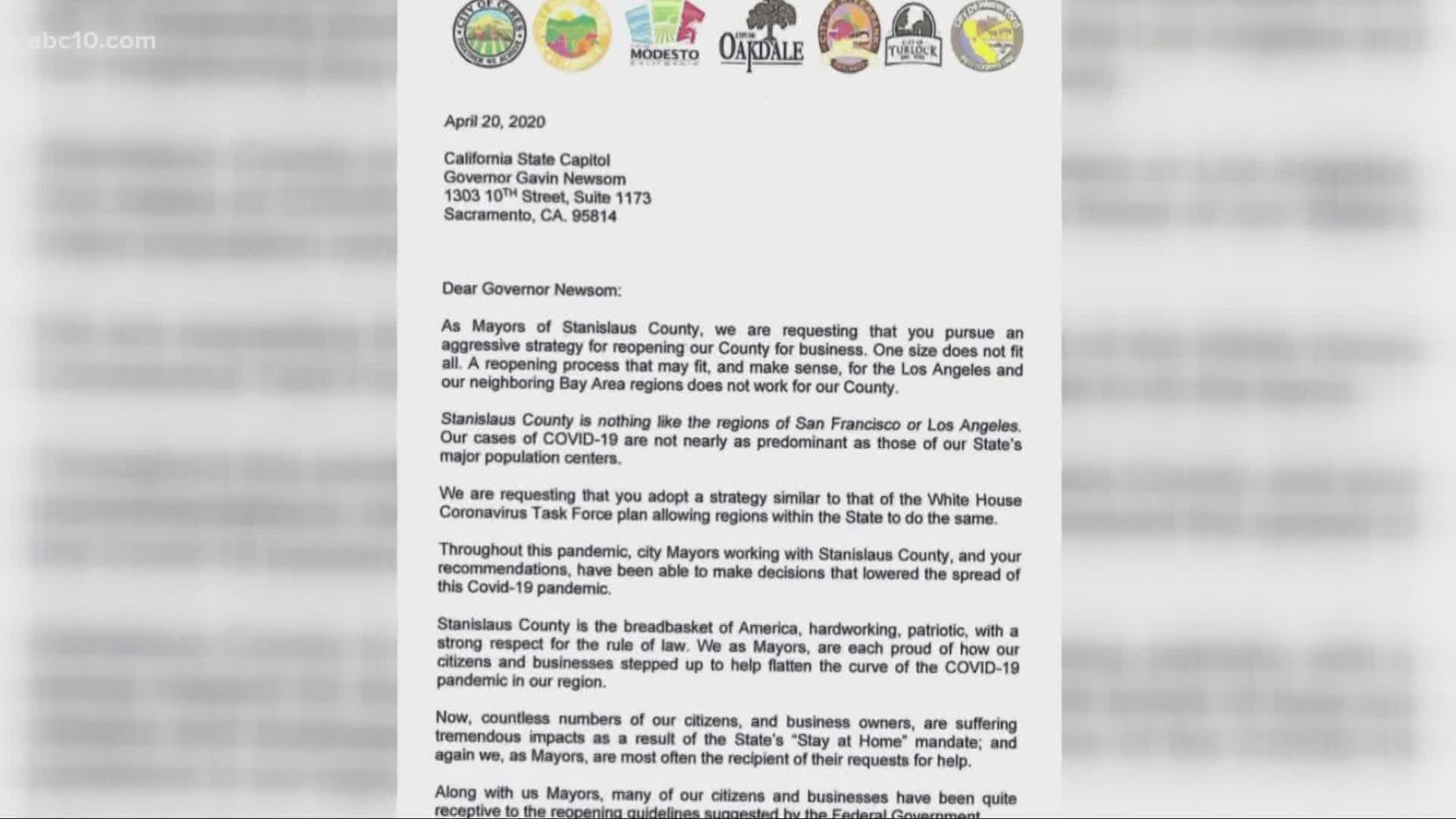 MODESTO, Calif. — Just two days after Stanislaus County received a public testing for the coronavirus, seven of nine mayors in the county are asking Governor Gavin Newsom to allow their cities to begin reopening.

Mayors from Modesto, Ceres, Hughson, Oakdale, Riverbank,Turlock and Waterford sent the governor a letter that their cities are unlike San Francsisco and Los Angeles, California cities that have had hundreds and thousands of confirmed coronavirus cases.

"People are out of their jobs, and the businesses are suffering," said Modesto Mayor Ted Brandvold. "That even translates right into the cities."

The mayors said in the three-page letter to Newsom that if social distancing were continued, businesses like "barber shops, hair salons, restaurants and golfing" could reopen as a first phase restarting the cities' economies.

RELATED: Newsom allows essential surgeries, but says 'there is no date' to reopen California

"Small business should be able to comply with a lot of the restrictions that the big box stores do now," said Hughson Mayor Jeramy Young. "And I think a lot of them are ready to deal with social distancing, with sanitation and things and can make those adjustments and still do business and provide some for their families."

In response to the mayors' letter, the Stanislaus County Health Services Agency reiterated its stay-at-home order and directed all businesses to "cease non-essential operations at physical locations in the county."

Not every mayor in Stanislaus County signed the letter. Mayors for Patterson and Salida, which just opened a drive-through testing center, refused to sign the letter, saying that doing so would be premature.

"I am taking a more conservative, balanced, data-driven approach to this, because our numbers are still going up," explained Patterson Mayor Deborah Novelli.

Meanwhile, Newsom remains steadfast in his stay-at-home policy, pointing at the state's numbers of confirmed cases, hospitalizations and deaths that continue to rise.

Still, Newsom acknowledged the push back that he's been receiving from counties and cites across the state.

"Just want to make sure we're being thoughtful, that we're rowing in the same direction," Newsom said. "Interesting, the vast majority of calls are to caution us."