Tens of millions of stimulus checks should be available in bank accounts starting Wednesday, March 17. Here's the latest timeline on when you might see the money. 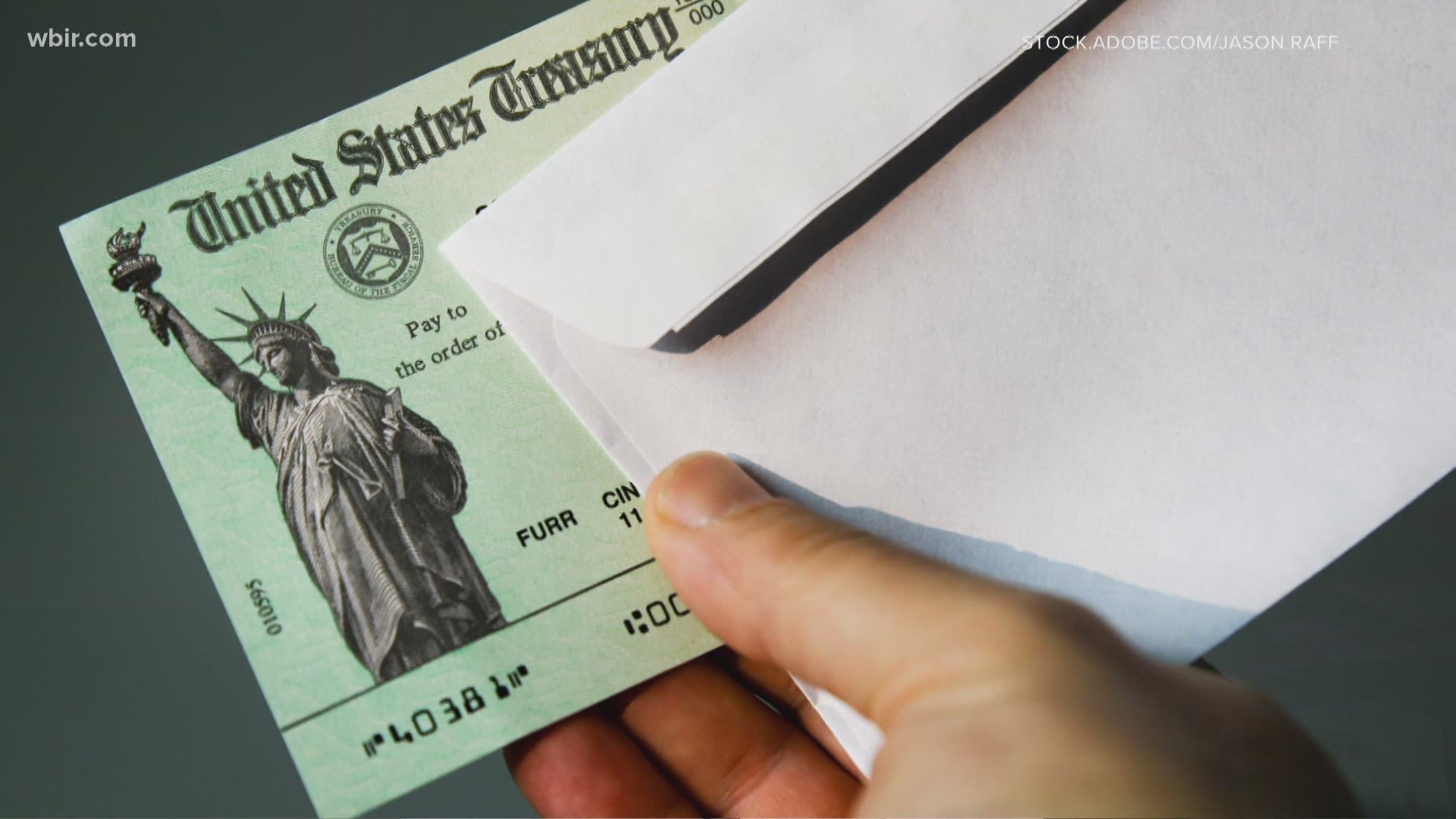 But it could take some time before individuals and families see the money, and in some cases, it may depend on what bank you have. Tens of millions of people should be receiving their stimulus checks on Wednesday, March 17, according to the American Bankers Association.

Biden pledged on Monday that there will be 100 million stimulus checks in people's pockets in the next 10 days.  Just after the relief aid was signed by Biden last week, White House Press Secretary Jen Psaki said "payments to eligible Americans will continue throughout the course of the next several weeks."

The latest round of relief payments will provide households with $1,400 for each adult, child and adult dependent, such as college students or elderly relatives. Adult dependents were not eligible to receive payments in the previous two rounds of payments.

Over the weekend, the IRS re-launched the “Get My Payment” tool on the IRS.gov website to help Americas track their own payments.

If you are getting "Payment Status Not Available" from the IRS stimulus check tracker -- don't be alarmed.

According to the IRS, if you receive that message it can mean one of three things:

The agency said it will continue to issue the 2021 Economic Impact Payments throughout 2021.

NOTE: The IRS has asked the public NOT to call them to ask questions. All of the information about the stimulus checks are listed on the IRS website.

Your bank account may show there is a pending payment for your stimulus check and it will stay that way until Wednesday, March 17.

Why? When the IRS first announced last Friday that payments were starting, it noted that the "official payment date" would be March 17 and some "may see the direct deposit payments as pending or as provisional payments in their accounts" before then.

"The IRS recently sent an initial wave of tens of millions of economic impact payments via the Automated Clearing House (ACH) system," the statement said. "While the IRS could have chosen to send the funds via Same Day ACH or provided for an earlier effective date, it chose not to do so. It is up to the sender, in this case the IRS, to decide when it wants the money to be made available and the IRS chose March 17.”

Still eager to know when you're getting your stimulus check? Use the “Get My Payment” portal on the IRS website.

Am I eligible for the third stimulus check?

The American Rescue Plan provides households with $1,400 for each adult, child and adult dependent, such as college students or elderly relatives.

A qualifying family of four would receive $5,600.

RELATED: $1,400 stimulus checks: Who qualifies, how to track, when money may arrive

RELATED: You can now track the status of your third stimulus check

Do college students, adult dependents get the third stimulus check?

Unlike the first and second rounds of checks, payments for dependents in the third round are not restricted to only children under 17.

According to the IRS website: "Eligible families will get a payment based on all of their qualifying dependents claimed on their return, including older relatives like college students, adults with disabilities, parents and grandparents."

Now it's important to note that if you're a dependent, the check won't go to you, it'll go to whoever claims you as a dependent.

When will SSI get their third stimulus check?

A date has yet to be set for when those receiving Social Security and other federal beneficiaries will get their money. Though the IRS has said those recipients will generally receive the third payment the same way as their regular benefits.

The IRS said if someone did not file a tax return and they receive SSA, RRB, SSI or VA benefits and their benefits are currently deposited to a Direct Express card, then the 2021 Economic Impact Payment will be deposited to that card.

How does the IRS know who gets a check?

The White House created a website to give an overview of what the American people need to know about the direct payments in the American Rescue Plan. Here's how it said checks are determined:

How to track your check?

The IRS claims that the first batch of payments will be sent via direct deposit.

The agency added that additional batches of payments will be sent in the coming weeks by direct deposit and through the mail as a check or debit card.

RELATED: The IRS 'Get My Payment' portal tells you your stimulus payment status

Can the $1,400 checks be seized by banks or creditors?

It depends on the type of debt that you have and who would be attempting to collect it. Like the previous rounds of stimulus checks, this aid can NOT be garnished by the federal government or the IRS. But it could be potentially garnished from private companies.

RELATED: VERIFY: Can your stimulus check be seized by banks or private debt collectors?

Will I have an issue getting my check with TurboTax again?

On Monday, TurboTax released a statement promising that all issues have been corrected for the third round of checks, which could be arriving any day.

"We are working closely with the IRS, and we’ve confirmed that the IRS has accurate bank account information for all TurboTax customers," TurboTax said in a tweet last week.

The IRS has begun processing stimulus checks. We are working closely with the IRS, and we’ve confirmed that the IRS has accurate bank account information for all TurboTax customers. You can find up-to-date information on stimulus payments, here. https://t.co/10BufS56aY

What if I didn't get the first and second stimulus payments?

The IRS said anyone who was eligible to get the first or second stimulus payments but didn't, needs to claim a 2020 Recovery Rebate Credit and file a 2020 tax return. Even if someone isn't required to file? The IRS says yes.

However, the IRS said that the third payment of $1,400 will not be used to calculate the 2020 Recovery Rebate Credit.

This calculator can help determine how much you can expect from the third stimulus check.

What else is in the COVID-19 relief package?

Expanded unemployment benefits from the federal government are extended through Sept. 6 at $300 a week. That’s on top of what beneficiaries are getting through their state unemployment insurance program. The first $10,200 of jobless benefits would be non-taxable for households with incomes under $150,000.

Additionally, the measures provide a 100% subsidy of COBRA health insurance premiums to ensure that the laid-off workers can remain on their employer health plans at no cost through the end of September.

The legislation also sends $350 billion to state and local governments and tribal governments for costs incurred up until the end of 2024. The bill also requires that small states get at least the amount they received under virus legislation that Congress passed last March.

Many communities have taken hits to their tax base during the pandemic, but the impact varies from state to state and from town to town. Critics say the funding is not appropriately targeted and is far more than necessary with billions of dollars allocated last spring to states and communities still unspent.

The relief package calls for about $130 billion in additional help to schools for students in kindergarten through 12th grade. The money would be used to reduce class sizes and modify classrooms to enhance social distancing, install ventilation systems and purchase personal protective equipment. The money could also be used to increase the hiring of nurses and counselors and to provide summer school.

Spending for colleges and universities ar being boosted by about $40 billion, with the money used to defray an institution’s pandemic-related expenses and to provide emergency aid to students to cover expenses such as food and housing and computer equipment.

A new program for restaurants and bars hurt by the pandemic would receive $25 billion. The grants provide up to $10 million per company with a limit of $5 million per physical location. The grants can be used to cover payroll, rent, utilities and other operational expenses.

The bill also provides $7.25 billion for the Paycheck Protection Program, a tiny fraction of what was allocated in previous legislation. The bill also allows more non-profits to apply for loans that are designed to help borrowers meet their payroll and operating costs and can potentially be forgiven.

The bill provides $46 billion to expand federal, state and local testing for COVID-19 and to enhance contract tracing capabilities with new investments to expand laboratory capacity and set up mobile testing units. It also contains about $14 billion to speed up the distribution and administration of COVID-19 vaccines across the country.

Parts of the legislation advance longstanding Democratic priorities like increasing coverage under the Obama-era Affordable Care Act. Financial assistance for ACA premiums would become considerably more generous and a greater number of solid middle-class households would qualify. Though the sweetened subsidies last only through the end of 2022, they will lower the cost of coverage and are expected to boost the number of people enrolled.

The measure also dangles more money in front of a dozen states, mainly in the South, that have not yet taken up the Medicaid expansion that is available under the ACA to cover more low-income adults. Whether such a sweetener would be enough to start wearing down longstanding Republican opposition to Medicaid expansion is uncertain.

Under previous law, most taxpayers could reduce their federal income tax bill by up to $2,000 per child. In a significant change, the measure increases the tax break to $3,000 for every child age 6 to 17 and $3,600 for every child under the age of 6.

The legislation also calls for the payments to be delivered monthly instead of in a lump sum. If the secretary of the Treasury determines that isn’t feasible, then the payments are to be made as frequently as possible.

Families would get the full credit regardless of how little they make in a year, leading to criticism that the changes would serve as a disincentive to work. Add in the $1,400 checks and other items in the proposal, and the legislation would reduce the number of children living in poverty by more than half, according to the Center on Poverty and Social Policy at Columbia University.

The bill also significantly expands the Earned Income Tax Credit for 2021 by making it available to people without children. The credit for low and moderate-income adults would be worth $543 to $1,502, depending on income and filing status.

The bill provides about $30 billion to help low-income households and the unemployed afford rent and utilities, and to assist the homeless with vouchers and other support. States and tribes would receive an additional $10 billion for homeowners who are struggling with mortgage payments because of the pandemic.

TEGNA and the Associated Press contributed to this report.