During the deployment, the crew was ravaged by COVID-19 and the commanding officer was fired for the way he warned the Navy. 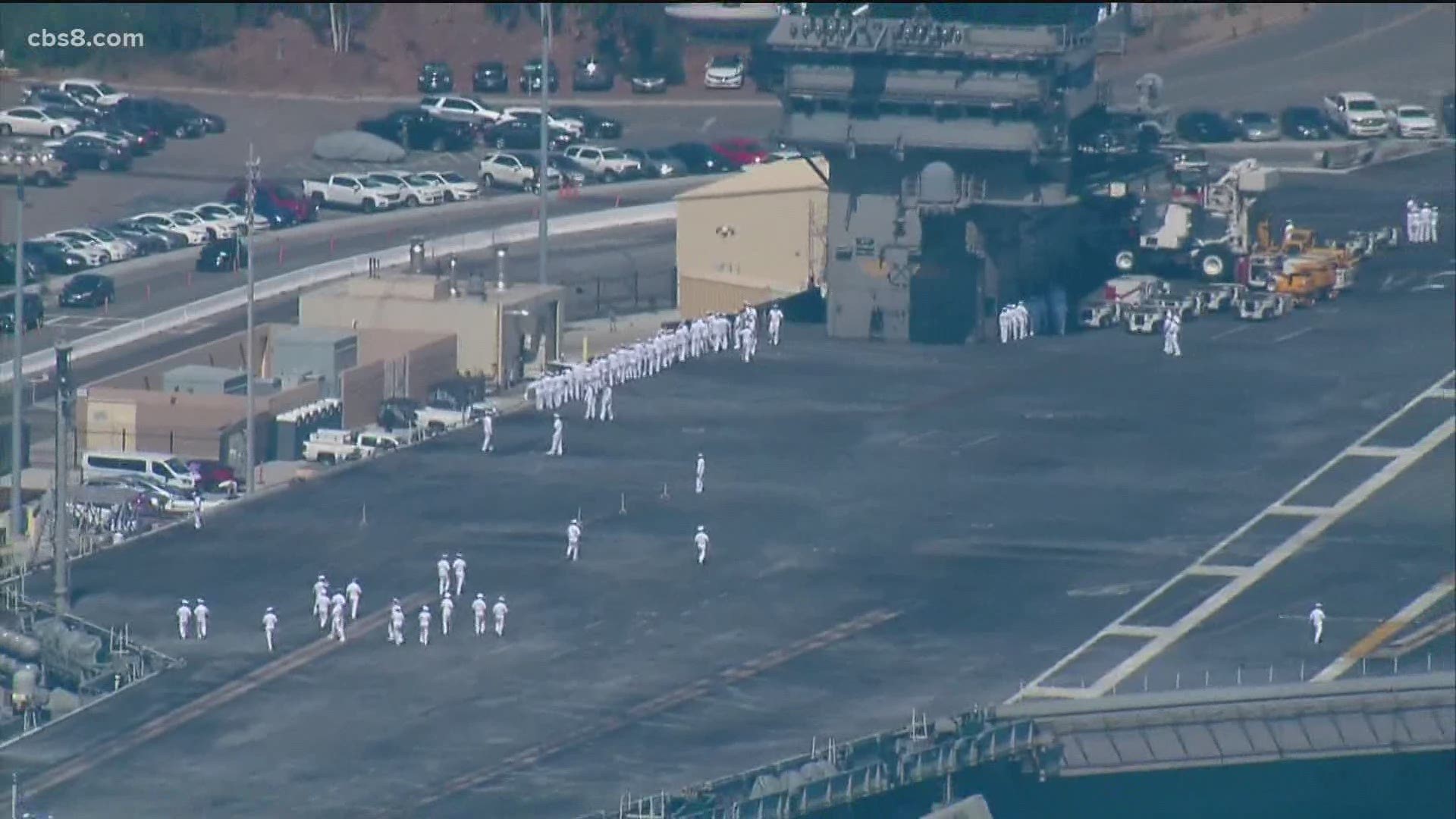 SAN DIEGO — The Nimitz-class aircraft carrier USS Theodore Roosevelt returned to port in San Diego on Thursday from a deployment that was anything but routine. It had been gone for nearly six months and its homecoming was also different than typical Navy ship arrival.

More than 6,000 sailors from Theodore Roosevelt Strike Group deployed on Jan. 17 to conduct routine operations in the Indo-Pacific and maintain security and stability in the region.

In March, the USS Theodore Roosevelt had an outbreak of coronavirus on the ship which lead to it being docked in Guam. Over half the crew was pulled off the ship and quarantined at various locations on the island. Two crew members died, at least one from the virus. The crew was able to get back to their mission on June 4.

Thursday's arrival at Naval Station North Island was without the usual fanfare seen in the past.

Due to social distancing guidelines, families had to wait by their cars. Even the traditional first kiss was scrapped.

Despite all of that, the joy of being home wasn't lost on the sailors. News 8 was there when Keyon Holiday reunited with his family.

Keyon was one of the Roosevelt sailors who contracted the coronavirus.

“I couldn’t taste anything and then later on, I ended up getting a chest pain, but that was it," he said.

Keyon admits the deployment wasn't easy but says it's what he signed up for.

“It was a lot of obstacles but it was something I signed up for so I was ready for what came," he said.

As for his mom, she's proud and grateful.

Captain Carlos Sardiello acknowledged both the changes and obstacles his sailors faced during deployment.

"This deployment presented unprecedented challenges and I'm incredibly proud of the team for their tenacity and fortitude," Captain Sardiello said.

Though virus free now, back in March, more than 1200 of the crew contracted COVID-19 after a stop in Vietnam.

Adding to the stress, the commanding officer, Captain Brett Crozier, was relieved of duty for the way he warned the Navy about the spread of coronavirus aboard his ship.

When the coronavirus outbreak was discovered on the Roosevelt, Crozier sent an email to several commanders pleading for more urgent Navy action, including the removal of nearly all sailors from the ship to protect their health. That email was leaked to media, and the acting Navy secretary at the time, Thomas Modly, accused Crozier of bad judgment and directed that he be relieved of command April 2.

During a press conference after the ship docked, Captain Sardiello said, "The crew of TR persevered displaying uncommon fortitude and tenacity in the face of uncertainty to meet expectations in a crisis." He added, "This recovery of the ship and the crew on deployment is a testament to the professionalism of the young men and women of the TR who turned a potentially demoralizing downward spiral into a symbol of inspiration and hope against adversity."

The USS Theodore Roosevelt sailed over 31,835 nautical miles during their months-long deployment.

The press conference can be watched below.

RELATED: USS Theodore Roosevelt sidelined by coronavirus is back operating in Pacific