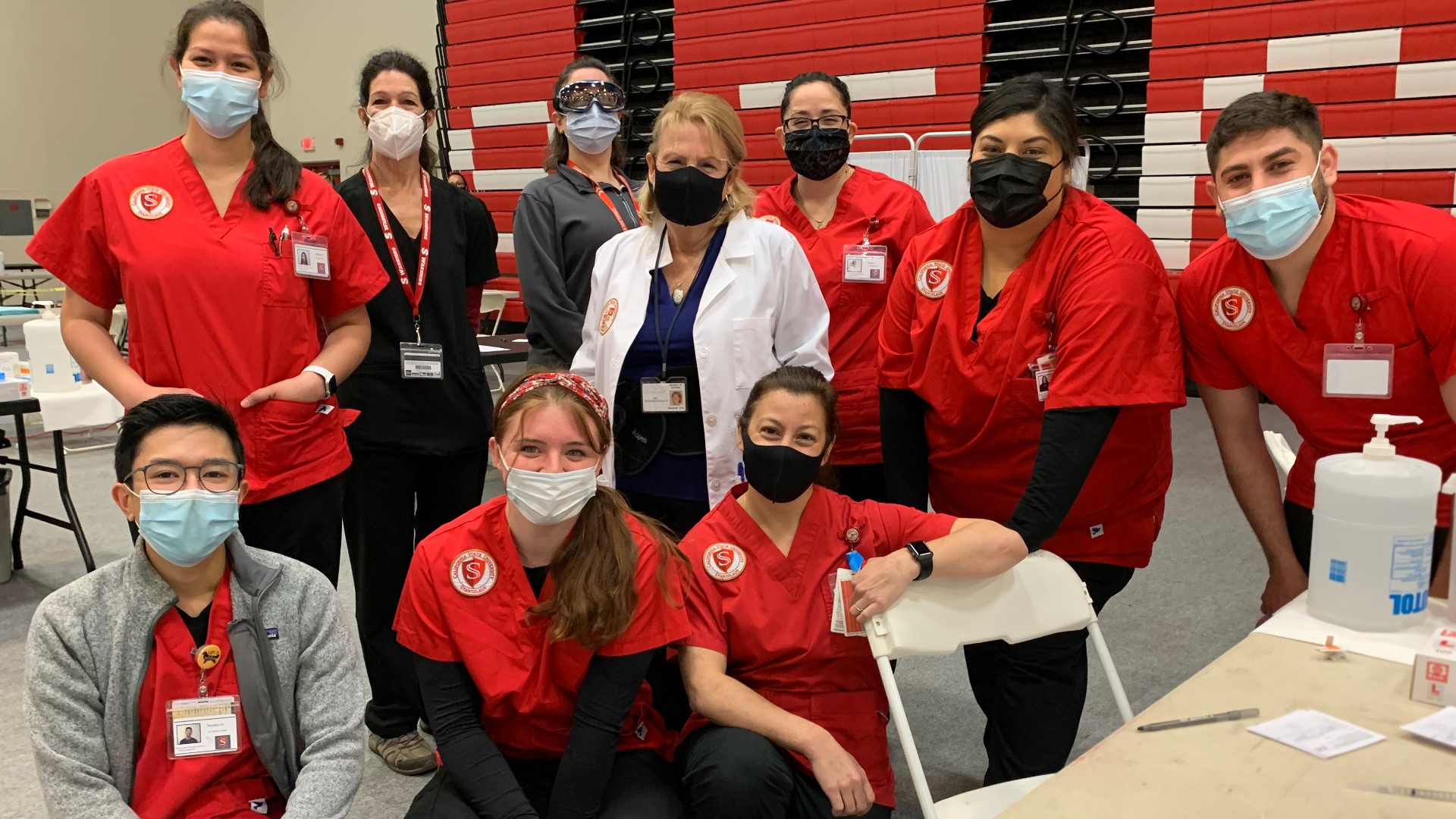 TURLOCK, Calif. — Nearly a year ago, the world was turned upside down as the coronavirus triggered lockdowns, ICU worries, and devastated families. But now, Kate Vandenbroeke is one of the people trying to flip the world right-side up.

She’s a third-semester nursing student at Stanislaus State University, who balances her studies with raising a four-year-old child. Despite the workload, she rushed to the front lines of Stanislaus County's vaccination effort at the first notice in January.

Mary Jo Stanley, director for the university's School of Nursing, said the transition is a natural one for her 20-student crew.

“This is what nursing does," Stanley said. "Our students are in the hospitals they’re out in the community. That’s how they get trained. Our nursing students work with other nurses as well as our faculty… this is like another clinical setting for us.”

On Day 1 at the university, eight of the nursing students walked onto the campus to answer the call of hundreds to thousands of seniors. Vandenbroeke was part of the first crew and arrived at the university campus about an hour before the clinic opened.

However, she was far from the first person to arrive that day. Hundreds of seniors were already in line waiting to get their vaccination.

“There had been a line started at 4 o'clock in the morning, and people had chairs. It was freezing. It was so cold that day, and they all knew that the vaccination clinic is not going to open till 8 o’clock and they didn’t care,” Vandenbroeke said.

As the seniors idled in line, Stanley oversaw students as they gave vaccinations, performed intake, handled forms, and interacted with people who, frankly, hadn't been outside for some time.

“We literally worked all day. There was very minimal breaks. We were busy. There was a big gymnasium full of people that all needed to be vaccinated…," Stanley said.

Each student had their own experience, hearing stories from seniors who were reentering the community after months at home. Among those people was a person that Vandenbroeke won't ever forget, a woman who hadn't left her home since February of 2020.

“This vaccine clinic was the first time she had left the house in 10 months, and when she got that vaccine, she broke down crying because she knew it was the beginning of the end,” Vandenbroeke said.

She said it's a moment that she'll be telling people for years to come.

Stanley said the students are part of something historic as they try to flip the world right-side up.

“I guess everybody realizes it’s time to step up, and they (students) feel good that they can help and do something," she said. "It’s difficult when we see something going on and you say ‘but what can we do?’ And this answered that."

As for what Vandenbroeke has been able to do, she helped about 150 seniors take another step toward normalcy.

“I am giving them hope and freedom and a chance to come back into the community and live the lives that they want to live and see their friends and see their families and that is an overwhelming feeling for me to be apart of that,” Vandenbroeke said.

After all that people have sacrificed to bring the world to his period in time with the vaccine, she said that, whenever the opportunity comes, she'll be at the university clinic to help end the pandemic.