Evan Brown, 12, got his vaccine for his mother who is battling cancer, but his story of sacrifice to keep his mother well started years ago. 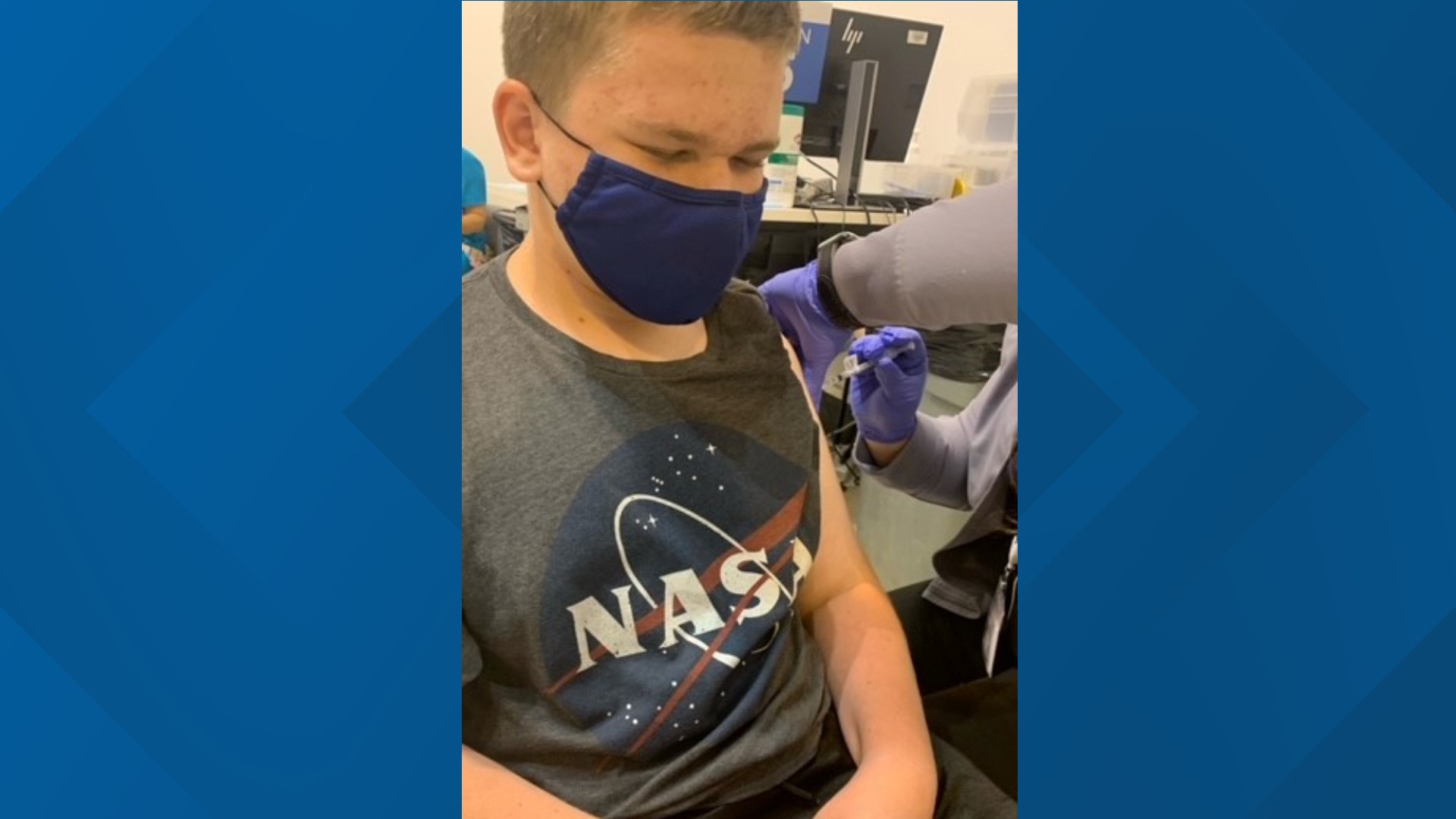 WEST SACRAMENTO, Calif. — To say mothers are heroes may be the understatement of the year for 12-year-old Evan Brown, a Southport Elementary Student who has taken pandemic restrictions to the extreme in efforts to keep his mother from getting sick.

Evan’s mother Melissa Brown, 41, suffers from a rare incurable blood cancer called Myeloma which requires chemotherapy and puts her at serious risk of death if she falls ill with coronavirus.

Life as the 6th grader knew it ground to a near halt last March, as the deadly coronavirus reached the United States and government leaders began unprecedented lockdown measures to protect public health.

More than 586,000 American’s have died of coronavirus.

In the past year, Evan has spent a lot of time at home. He took a break from baseball, forwent seeing friends in person and rarely went out. When he did it’s been mostly with his mother, father and 8-year-old brother. He even celebrated his 12th birthday while wearing a mask in his driveway, family and friends stayed physically distant in their cars.

“I had to do all this stuff just to protect her and I was fine with it, I didn’t mind it, but it was hard,” Evan Brown said.

He’s fine with it because his mother has taken care of him his entire life and now he can give back, Evan said. He calls his mom a hero for all that she’s done for him and all that she has fought through with her illness.

“What went through my head was like ‘Oh, shoot,’ this could take her away from me,” Evan said in regards to the pandemic.

He’s had an unfortunate experience being away from his mother for a long period of time.

In 2019, Melissa spent three months at Stanford Hospital undergoing cancer treatment. Evan says he never wants to be away from his mother for that long again.

“He’s just a really good kid and I’m blessed to be his mom,” Melissa said, wiping away tears.

The family says they were able to go out and do things together but spent much of the past year away from others including close family like their grandparents.

Each Saturday the family would make an effort to go out. Evan’s mother, father and 8-year-old brother would take a picnic and a trip to somewhere that not a lot of people would gather so they would be safe.

Still, the mother of two says she knows how hard it has been on her children and how proud she is of her son.

“He just did it and there was never a fight or an argument, ‘but I want to go, I should be allowed to go.’ He just did it,” Melissa said.

Evan’s mother was alerted Friday that a vaccine appointment had opened up at the Kaiser Clinic at the California Exposition. The 12-year-old received his first dose of the Pfizer vaccine. He says he feels like he was just born yesterday.

“It feels really good,” he said.

Evan is encouraging everyone to get their shot as well. He says getting your shot will help us all get closer to doing normal things again, like being a kid.

Pfizer is the only vaccine to have emergency approval for children over 12-years-old in the United States. There are currently no vaccines approved for children younger than 12-years-old, which means Evan’s brother Zack, 8, will need to wait a little bit longer. Pfizer recently announced its plans to apply for approval through the FDA in September.

“He’s got the biggest heart and knowing that he just wanted to keep me safe, just means a lot,” Melissa said.

Melissa is now fully vaccinated but the family is continuing to be vigilant about coronavirus safety measures until the entire family is vaccinated. They hope they can move more safely together then.

Evan has been allowed to resume baseball while following strict safety measures. He can do that more comfortably now that he’s vaccinated. He’s very excited that his West Sacramento Little League team the Minnesota Twins will be competing in the upcoming tournament of champions.

COVID Cases have plateaued in Sacramento County and students are starting to petition their schools in Modesto for an outdoor prom as the CDC updates guidance.