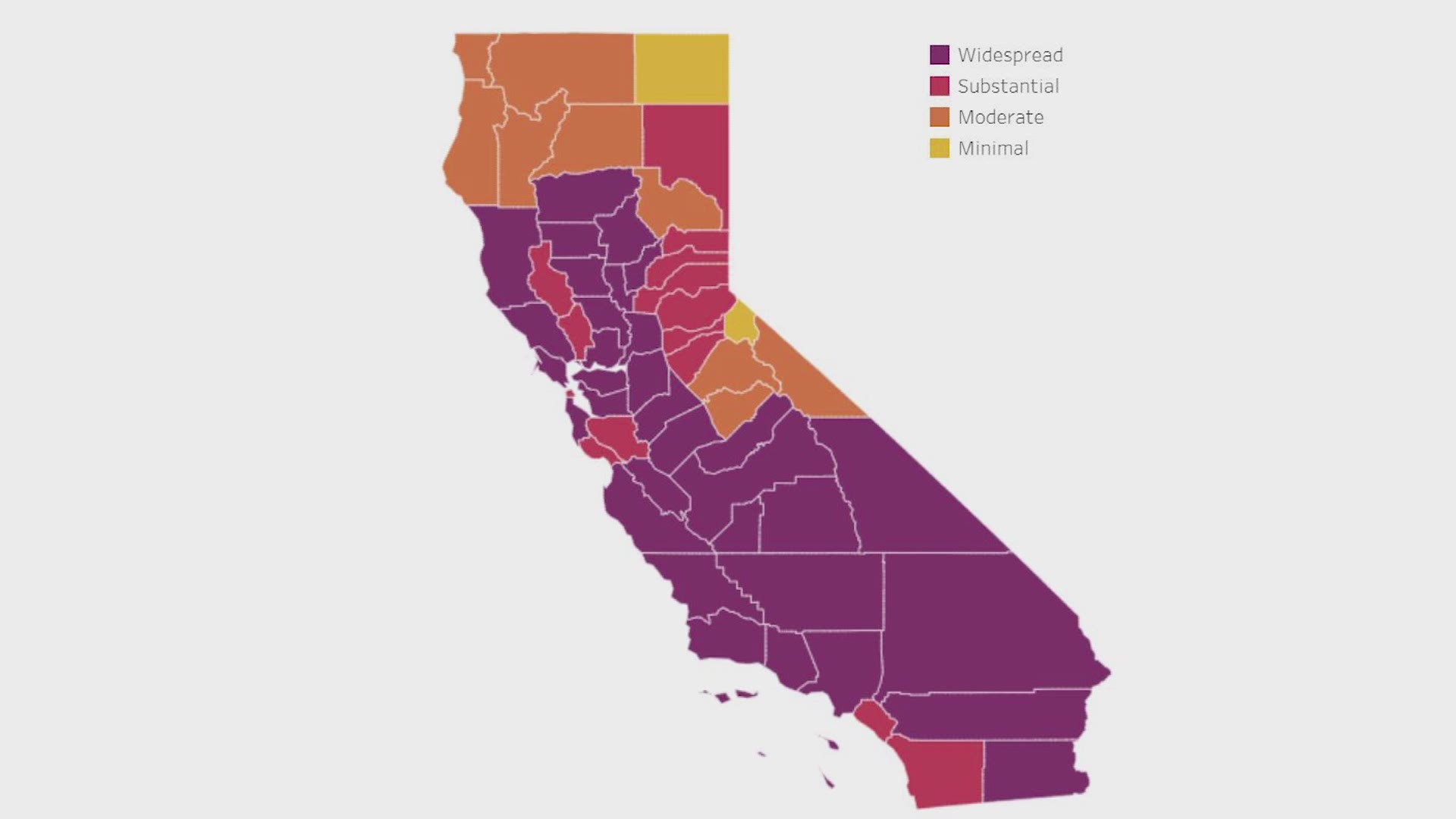 PLACER COUNTY, Calif. — Placer County has been downgraded from the purple tier to the red tier on California’s four-tier COVID-19 re-opening system. It’s good news for the county because it means new businesses can open and people living there have a few new freedoms.

The new color-coded tiered system went into effect on August 31 and is based on two criteria: new cases per 100,000 residents and positivity rate or the number of tests coming back positive.

Purple means the virus is widespread. Counties in this tier have more than seven new daily cases per 100,000 residents or there is an 8%+ testing positivity rate. The purple tier has the maximum restrictions for schools and businesses.

Red means there is still substantial spread in the county. There are between four and seven new daily cases per 100,000 residents, or between 5% to 8% testing positivity rate. It also means restrictions are more relaxed.

She went on to detail some of those businesses.

“So personal services,” explained Gore. “Nail salons, tattoo parlors can actually finally open up. And businesses that can move back indoors can be restaurants at 25% capacity, gyms at 10% capacity.”

One such restaurant now open is Buck and Sadie’s in Roseville.

“Our industry is one of the hardest industry’s hit,” admitted Braxton Phillips, co-owner of Buck and Sadie’s. “And so when we got the opportunity to transition from purple to red, to say that we were excited is an understatement.”

He explained how they’re keeping customers safe and keeping capacity to 25%.

“We’re pushing the reservations hard,” said Phillips. “We have six-foot markers spaced all throughout the restaurant and that was from the previous time we got to open up. So this time what is nice is that people are a little more accustomed to what’s going on at this point.”

Schools in Placer County have actually been given special permission to be open since August 31, but it doesn’t mean districts are ready, yet.

“There are things we have to do and get into place,” explained Gayle Garbolino-Mojica, Placer County Superintendent of School. “One of the biggest items that we need to account for is testing of exposed and symptomatic students and staff.”

She said she knows parents are eager to get back to in-person schooling and said it’s coming soon.

“I would say that you would probably see anything from in the next week or two starting to see districts starting to come online for a hybrid program,” explained Garbolino-Mojica. “All the way up through October and the later parts of the fall.”

WATCH ALSO: 'We got half our animals' | People evacuate the Bear Fire as it destroys homes