Nearly every e-cigarette could become illegal by May 2020

A federal judge in Maryland is compelling the FDA to tell vaping companies to provide scientific study or stop selling. 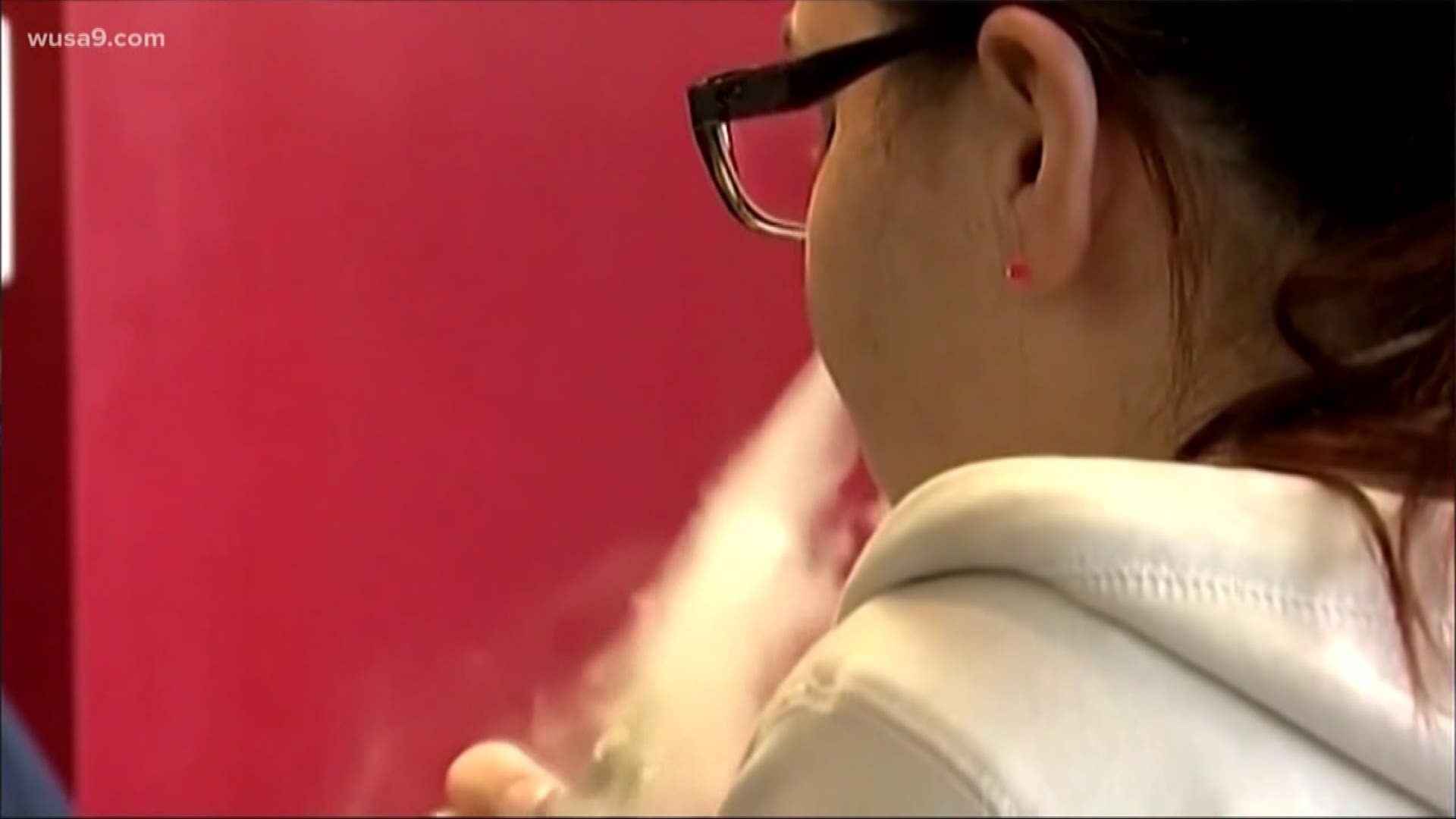 WASHINGTON — Vaping and the health concerns surrounding it has been a topic of discussion lately, with President Trump retreating from a proposed ban against flavored e-cigarettes.

For years, E-cigarette companies have been allowed to sell their products without prior federal approval. That may all change because of a landmark lawsuit filed in Maryland with a nationwide impact.

Jeff Dubner, the senior counsel of D.C. based non-profit Democracy Forward, could become a giant slayer in the e-cigarette community. At stake? The entire vaping industry and the health of teens requiring lung transplants, as well as preventing deaths from people searing their lungs.

According to the American Vaping Association, the decision could also lead to more than 10,000 small businesses closing and millions of smokers relapsing back to cigarettes.

"If the pre-market review had been applied as it was supposed to, we wouldn't be having this crisis and we wouldn't have those dozens of deaths," Dubner said. "So, it really is a tragedy that hits home."

Backed up by a who's who of health organizations, including the American Academy of Pediatrics and both the American Heart and Lung Associations, Dubner sued the U.S. Food and Drug Administration.

"One thing they can't do is simply say, we're just not going to enforce this for the next five years," Dubner said.

When it comes to regulating e-cigarettes, many former FDA decisions followed a pattern of postponement. Under President Obama, the FDA allowed e-cigarette companies to remain on the market until 2018 before completing the required pre-market authorization.

Once Donald Trump was inaugurated, the FDA punted that requirement until 2022. When health organizations sue the FDA,  the agency may be compelled by the 4th Circuit Court of Appeals to force e-cigarette makers to comply by May 2020.

Credit: EVA HAMBACH/AFP/Getty
An illustration shows a man exhaling smoke from an electronic cigarette in Washington, DC on October 2, 2018.

"A big part of this problem, I think, is that the administration came in with an anti-regulatory mindset," Dubner explained."They delayed or rolled back regulations wherever they could."

The FDA told a federal judge it expects to draft new approval rules due any day now. Without that approval, every non-approved vaping product -- currently all of them -- would be federally illegal.

President of the American Vaping Association, Greg Conley, said that the decision would drastically impact businesses who sell the e-cigarettes, many of which operate differently than cigarette companies.

"The companies making them will go out of business because they do not have millions and millions of dollars like cigarette companies do to subsidize the science on their applications," Conley said.

Credit: Skype
President of the American Vaping Association, Gregory Conley, speaking from the UK by Skype to WUSA9

Different than vaping, the future of e-cigarettes could come with a new product called IQOS, which is made by Phillip Morris. Instead of vaporizing nicotine, it heats up tobacco leaves without burning them

Already popular in Japan, IQOS was just approved for the sale in the United States. But non-profit advocacy group American Vaping Association points out it took Phillip Morris two years to obtain FDA approval, time that some smaller vaping e-cigarette companies say they don't have.

"The FDA stepping in and banning or regulating nicotine vaping products will do nothing to stop drug dealers from selling contaminated illicit THC oil cartridges,” Conley said.