The battleship USS Missouri's place in history was cemented the moment the Japanese surrendered on her deck, ending World War Two. Lesser known is another ship baring an even more familiar name. 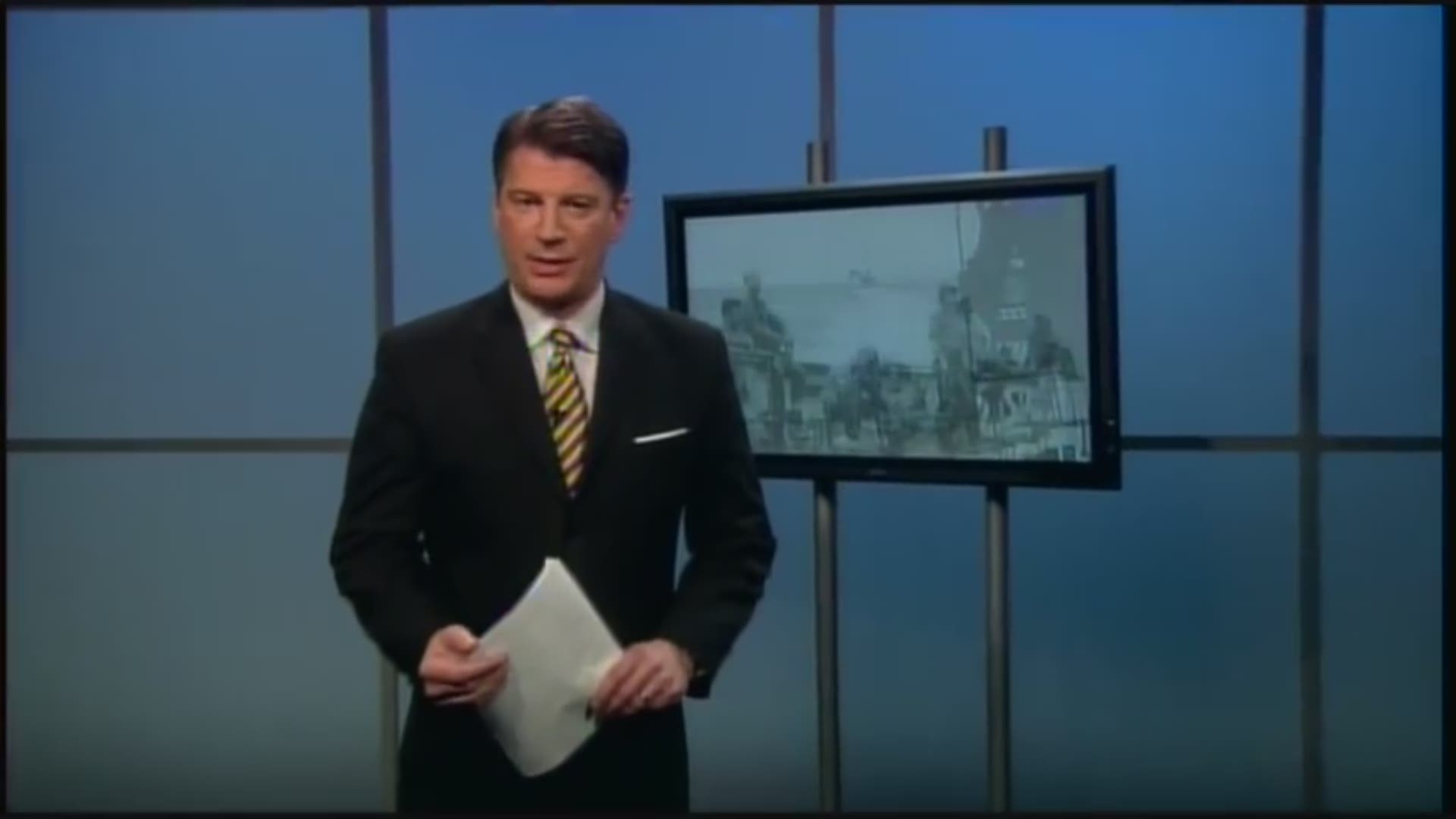 The battleship USS Missouri's place in history was cemented the moment the Japanese surrendered on her deck, ending World War Two. Lesser known is another ship baring an even more familiar name. It's a story of bravery and guts mixed with a little luck.

It took place during a two-hour period, on a day no American will ever forget. The day was Dec. 7, 1941. Marty Barnes, a 19-year-old Marine from Missouri, awoke early. He was in an especially good mood that day. Just hours before he enjoyed a day of liberty he knew he'd remember forever. How many other 19-year-olds got a chance to bike around the Hawaiian Islands, enjoy a wonderful meal and then have the honor of raising the American flag.

As a member of the Marine color guard on board the light cruiser USS St. Louis, his detail is responsible for raising the flags each morning. On this morning, he was on deck by 7:30. The deck of the St. Louis was still damp from the morning mist. The ship had just returned to Pearl Harbor from a short stint with the Asiatic Fleet and was moored outboard of the U.S.S. Honolulu.

Glancing across the port side of his ship, he could see the color guard unit of the Honolulu preparing their flags. On the starboard side, the exact same actions were taking place on the USS San Francisco. All three cruisers were moored to the pier at Berth B-17 in the Southeast Loch of Pearl Harbor.

As the pageantry of the flag raising drew closer, a dull hum became noticeable. At about 7:56 a.m., Barnes and the other men on the deck could see a large number of dark colored planes heading towards Ford Island. The planes began dropping bombs and opened fire with their on-board machine guns, strafing the area. Within minutes, the USS St. Louis went to general quarters.

"I was on deck when the attack started," remembered Barnes. "By the time they dismissed the color guard, why all the hatches had been dogged down and you can't open them once they sound battle stations aboard ship. If you're on topside, you stay topside, so I was topside."

Planes, bombs and black smoke filled the air as Barnes and his shipmates went into action. Barnes' battle station was at the front of St. Louis. Because of his flag raising duties, he was as far aft as possible. With no chance of getting to his assigned place, he immediately manned the closest gun, a .50 caliber machine gun and opened fire. "The crew of the St. Louis was fighting in five minutes," said Barnes. By 8 a.m. the ship's 1.1" battery of weapons was fully manned and in action delivering a full volume of fire at the attackers.

As sailors and Marines fought frantically on deck, orders were given at once to raise steam in six boilers. Two were undergoing routine cleaning. They were also ordered to make all preparations for getting underway at the earliest possible moment.

The USS St. Louis made a good target, sandwiched between the Honolulu and the San Francisco, and it didn't take long before the Japanese realized it too. At about 9 a.m., a formation of six dive bombers began an attack run on the Honolulu and St. Louis from an altitude of about 6,000 to 7,000 feet. Barnes and the other Marines manning the .50 caliber machine guns concentrated their fire on the bombers. Four of the planes sheered to the left and released their bombs. The bombs landed in the water between the dock and Ford Island. The fifth plane dropped its bomb about 200 feet from the Honolulu. But the sixth plane got its bomb close enough to cause damage.

"The Honolulu was tied up to the dock, we were tied up next to the Honolulu and the bomb went between the Honolulu and the docks and blew a hole in her side," said Barnes. "We weren't hit by that bomb, but it did shake us up a little." At 9:31 a.m., the St. Louis was ready to get underway. With boiler power for 29 knots, Capt. George Rood began pushing the St. Louis out to sea, via the South Channel. The destruction in the harbor forced Capt. Rood to take a longer route, around Ford Island. Barnes continued firing his 50 caliber machine gun as St. Louis passed battleship row to get out.

"You see men in the water. And the oil, the burning oil. You see men on decks of ships that are sinking. You see men that don't have a chance in hell of getting out of there. And you know that some of them are going to die."

The St. Louis raced through the harbor at five times normal speed. But even at that speed she remained a target of Japanese fighters, who strafed her twice. As she neared the outlet to the Pacific, it seemed her luck would hold up. "On the way out, we ran across a midget submarine trying to come in. They fired two torpedoes at the St. Louis, but both of them exploded in the coral," remembered Barnes.

Barnes remembering running into Japanese mini-sub. The trail of the torpedoes, led the watchful eyes of the crew of the St. Louis to identify a dark gray object about 18-feet-long, projecting above the water about 8 feet. "Captain Rood turned his ship slightly enough so he could bring to bare one of his five inch mounts and put a round right in the tally-tare of the submarine, and it was sunk right there," said Barnes. The St. Louis was now clear to sail into open ocean. She joined a small task force of ships, but were ordered not to pursue any enemy ships, but rather patrol the inlet to Pearl Harbor. For the crew of the "Lucky Lou," the morning of Dec. 7, was now over. She was the only ship of her size to fight her way out of the harbor to fight another day.