How bad are things at PG&E? A federal judge plans to chaperone it

Federal Judge William Alsup says he can't throw PG&E in prison for violating probation, but he plans to force the company to take sweeping safety measures on its power grid.

SAN FRANCISCO — In a remarkable four-page document, a federal judge in San Francisco this week said that even though it’s impossible to throw utility company PG&E in prison, his court plans to impose more punishment against the company by having the court and its agents act as what amounts to the company’s safety chaperone.

The company's electric operations are under scrutiny as CAL FIRE investigates the cause of the Camp Fire, which became the deadliest wildfire in California history when it killed 86 people in Butte County last November. CAL FIRE also blamed PG&E equipment for starting 18 fires in 2017.

PG&E's probation officer accused the company of probation violations this week, part of its sentence for its six federal felony convictions stemming from the 2010 San Bruno gas explosions.

In response, the court says it plans to force PG&E to adopt strict new safety practices, including mandatory power shut-offs during high wind—regardless of the inconvenience it would cause to customers.

It's the latest in a series of legal, financial, and regulatory problems that could threaten the company's very existence.

THIS COMES WHILE PG&E TAKES HITS ON ALL SIDES

On December 21, the state regulators in charge of supervising PG&E announced they’re open to virtually any option to fix the company’s safety culture. The California Public Utilities Commission (CPUC) is normally tasked with ensuring that PG&E is operating with healthy finances—but now proposes solutions as sweeping as chopping the company into smaller pieces or even forcing it out of business in a government takeover of PG&E’s power grid.

Meantime, the Camp Fire raises the prospect of bankruptcy for PG&E if the company is found responsible for starting it. Hundreds of civil suits have been filed against PG&E accusing it of causing the Camp Fire. The cost of the damage could be in the tens of billions of dollars. PG&E management is considering selling off the company’s gas operations to pay those damages, according to a report from NPR, but it’s not clear that the sale would raise enough money.

On top of all the financial problems, California Attorney General Xavier Becerra's office told the court that it’s possible that investigation could lead to criminal charges as serious as murder against PG&E, depending on what the investigation into the fire finds. Already, a dozen 2017 wildfires have been referred to local prosecutors for possible criminal charges against the company.

WHY PG&E IS ON PROBATION

After the company’s gas line blew up in San Bruno in 2010, a jury convicted PG&E of five felony counts of willfully disobeying federal pipeline safety laws and one felony for obstructing the investigation into the explosion by trying to falsify its records about its safety procedures to federal agents.

The CPUC recently accused PG&E of continuing to falsify safety records on its gas lines, despite being convicted of a federal crime for that in the past.

PG&E told ABC10 in a statement that “we did not live up to our commitment to accurate reporting and record-keeping” and says it’s taken corrective steps as a result, “including some leaders no longer being with the company.”

Still, the company’s history of falsifying safety information plays prominently in Alsup’s proposed changes to the terms of PG&E’s probation and the hands-on approach he has in mind.

The court set a hearing for January 30, to rule on the proposed changes to PG&E's probation.

‘A CORPORATION CANNOT GO TO PRISON’

The opening paragraph of Alsup’s four-page order hints that if PG&E were a person, it might be behind bars right now.

Alsup wrote: “A corporation cannot go to prison. So the criminal judgement imposed the largest fine allowed by law and several conditions of probation.”

Because PG&E can’t be put behind bars and it’s already been fined the maximum amount—all that’s left is to modify the terms of probation.

So that’s what the court said it plans to do, telling PG&E that it will need to prove why it shouldn’t have to face the sweeping new safety requirements the court has in mind.

Alsup drafted three proposed new conditions of probation, all aimed at forcing PG&E to adopt better safety practices in running its electrical grid, “in order to protect the public from further wrongs by the offender (PG&E,)” and “to promote the rehabilitation of the offender.”

Asked to comment on the substance and tone of the court filings, PG&E told ABC10 that it is “aware” of the judge’s order and “currently reviewing” it.

Alsup makes it plain that the court distrusts PG&E after the company's conviction of obstructing federal investigators.

His first proposed addition to the probation terms would order PG&E to conduct a new full inspection of its entire electrical grid “in light of PG&E’s history of falsification of inspections reports.”

Alsup says the company would need to trim any tree and branch that could pose a threat to lines in high wind, regardless of whether it’s within the normal physical distance required by CPUC.

He also said the company would need to “identify and fix” power line parts at risk of swinging into each other in high wind. This is especially relevant because the Camp Fire investigation found a broken hook may have allowed part of a high-tension transmission line to arc at the fire’s suspected origin point.

All of that work would need to be done by June 21—the unofficial start of the 2019 fire season.

The judge's second proposal would order PG&E to document the results of those new inspections and rate the safety “for each segment of its electrical grid” under different wind conditions, each certified under oath by a “qualified engineer.”

The judge’s proposed order would ban PG&E from relying on its previous records to make the new safety determinations, “in light of PG&E’s history of false reporting.”

The third and final new condition of probation proposed by Alsup would dictate to PG&E what it must do with its power grid on windy days.

This condition would hold PG&E to the new wind safety standards determined by engineers in the grid-wide inspection.

“PG&E must de-energize any part of its grid not yet rated as safe by PG&E for the wind conditions then prevailing until those conditions have subsided,” the proposed order reads.

The court would require PG&E to notify customers of pending shutoffs, but also wrote that “PG&E may not take into account the need for reliability of service, the inconvenience to customers resulting from interruption in service, or its impact upon PG&E’s revenues and profits.”

The judge summed this up, with added emphasis: "only safe operation will be allowed."

Alsup wrote that his goal is to see “zero” PG&E-caused wildfires in 2019.

He also acknowledged the potential for his proposal to upset a lot of people because power could be shut off more often.

“This will likely mean having to interrupt service during high-wind events (and possibly at other times) but that inconvenience, irritating as it will be, will pale by comparison to the death and destruction that otherwise might result from PG&E-inflicted wildfires,” the judge wrote.

Alsup went on to detail the need for PG&E to notify first responders, hospitals, and the general public of the chance of more power outages—and to consider using backup generators.

He also laid out a plan for the court-appointed monitor that’s watching PG&E during probation to perform spot-checks of PG&E’s work.

WHY THE COURT HAS CAUSE TO REVISIT PROBATION

In order for a court to justify rewriting the terms of probation, it needs to find a violation.

But PG&E’s probation officer flagged a different violation in a court filing this week, accusing PG&E of violating a simple term of probation: The requirement to report new legal cases filed against the company.

One month before the Camp Fire, PG&E settled a case with Butte County for $1.5 million because of three wildfires that sparked there in 2017, including the Honey Fire—in which CAL FIRE told local prosecutors that there could be grounds for misdemeanor criminal charges against PG&E.

The probation officer says the settlement money was paid to Butte County after negotiations with county prosecutors, allowing the company to avoid a possible civil or criminal trial.

Despite the requirement to report such things, probation officer Jennifer Hutchings said PG&E failed to do so:

The judge issued the summons to PG&E to appear in court to explain itself of January 30. If the company plans to oppose the plan, its written argument is due the week before.

Have a tip about this or any other story? Email reporter Brandon Rittiman at brittiman@abc10.com. 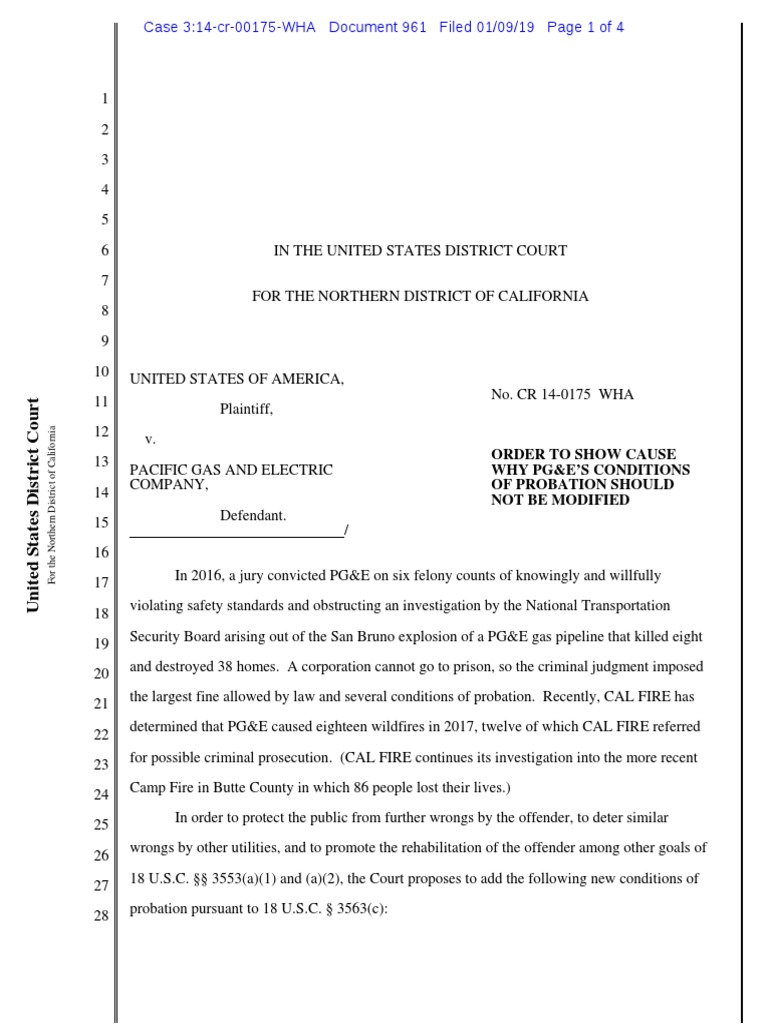