An ABC10 investigation reveals how PG&E made shutoff decisions to prevent wind-sparked wildfires without good wind data. PG&E could have afforded to do better. 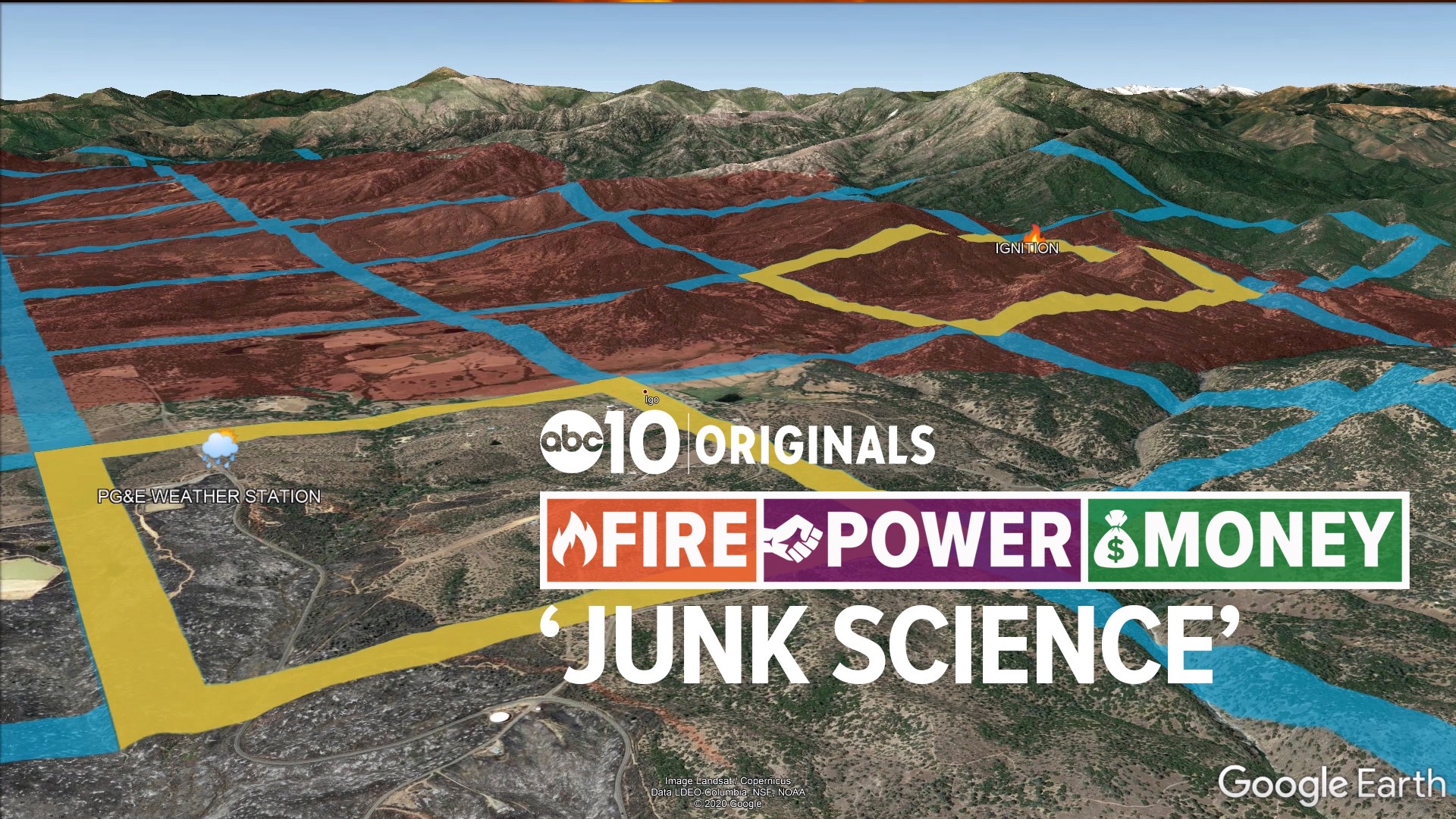 SHASTA COUNTY, Calif. — Eight-year-old Feyla McLeod and her mother Alaina Rowe McLeod lived in a 1.24 square mile box known as “grid cell 133_379” on a map created by PG&E; a cell they never escaped on the day the flames of the Zogg Fire sent them running for their lives.

Because the company is a federal felon on probation, PG&E had to reveal to a judge its methods for making life-and-death power shutoff decisions that windy September day.

Credit: McLeod Family
Feyla, Alaina, and Zach McLeod are seen posing for a family photo. Feyla and Alaina were found dead in a burned-up pickup truck that ran off a road during the Zogg Fire. Zach was on his way home from work, stopping to pick up groceries at the time. He has since filed a civil suit against PG&E.

ABC10’s analysis of the data PG&E submitted reveals a fundamental shortcoming of the company’s plan: PG&E ran a complicated algorithm designed to gauge the risk of a wind-sparked wildfire starting in each grid square on its map without knowing the actual wind conditions in each square.

“This is junk science,” said former prosecutor Mike Aguirre, who represents PG&E customers in the company’s criminal probation. “What you're basically uncovering is that this is another hoax. This is another scam.

Credit: ABC10 / Google Earth
PG&E grid cell #133_379 is where the McLeod family lived. The location where Feyla and Alaina McLeods' bodies were found is also inside the square.

The decisions made (or not made) by PG&E on the day of the Zogg Fire call into question the effectiveness of PG&E’s entire program of planned blackouts meant to prevent wildfires, which have caused headaches and worse for millions of PG&E customers in and around fire country.

“I am afraid. Not just for myself, but for our community and our state,” said former state utilities commissioner Catherine Sandoval, a law professor who serves as co-counsel for the PG&E customers.

Sandoval “didn’t see any scientific justification at all” for PG&E’s methods when our investigation revealed them on a map.

Credit: ABC10 / Google Earth
PG&E made safety decisions cell-by-cell in the grid you see overlaid on the terrain where the Zogg Fire burn. The fire's origin point can be seen in distance. It started beneath a PG&E power line that ran through mountain foothills. PG&E's nearest wind speed measurement came from the weather station you see labeled on flat terrain in the foreground

Further, our investigation found PG&E could have afforded to purchase at least 1,000 more wind monitors to improve its data in forested mountains but instead donated $1.2 million to California politicians and political campaigns.

The company had previously written to the court that “PG&E does not believe [political donations] were more important than utility operations,” including wildfire prevention.

PG&E declined to respond to ABC10’s questions for this story and instead pointed us back to the federal court docket upon which our findings are based.

Shasta County prosecutors are investigating the Zogg Fire for possible criminal charges against PG&E, which could include homicide for the four people who died in the hills around the communities of Igo and Ono.

Credit: US District Court
This image provided by PG&E to the federal court shows a private investigative crew hired by the company, collecting leftover evidence after CAL FIRE released its crime scene at the Zogg Fire origin point. The fire started beneath a PG&E power line, which is surrounded by caution tape on the forest floor.

Cal Fire, which seized parts of PG&E’s power line and a nearby pine tree, is set to complete its investigation of the cause in the coming months.

California laws and regulations require power companies to trim and cut away trees that could fall on power lines and spark fires.

NOTE: This investigation was produced by ABC10's FIRE - POWER - MONEY reporting project. If you have a tip that could help reveal more about California's crisis with utilities and wildfires, please contact investigative reporter Brandon Rittiman at brittiman@abc10.com.

PUT IN A BOX

PG&E owns a monopoly territory the size of Oklahoma with 100,000 miles of power lines hanging in the air.

The company has paid criminal and/or civil damages for sparking fires that killed 131 people since 2015. PG&E tried to get a handle on the risk of its lines sparking wildfires “by breaking PG&E’s service territory into preset grid cells of two kilometers-by-two kilometers,” the company explained to the federal court.

Credit: ABC10 / Google Earth
This image shows the terrain in the grid cell where the Zogg Fire started. The PG&E power line suspected of sparking the fire was located along Zogg Mine Rd, which ran up a wind-prone canyon in the mountain foothills above Redding. PG&E had no wind monitors in the square.

In each of these 1.24-mile squares drawn on PG&E’s map, the company runs hourly calculations to estimate the risk of a large fire being sparked by its power lines.

To do that, PG&E relied on a complicated algorithm of its own making, which blends data that includes its history of power outages, past wildfires, and fuel moisture.

The major shortcoming of the plan is that the wind speed, which is only one of the many data points used, is not actually measured in each of the squares.

In the case of the Zogg Fire, the nearest wind measurements to the place where the fire sparked came from grid cell 135-377. That grid square lies on flat terrain on the opposite side of the community of Igo from the hills where the fire started.

The nearest PG&E weather station was located 3.5 miles away from the origin point of the fire, about 600 feet lower in elevation.

“Everything about this terrain tells me that you would expect the weather to be different there where this fire is than where that weather station is,” Sandoval said.

PG&E’s plan, she agreed, is comparable to a ski resort making safety decisions for people riding the chair lifts by measuring the wind down in the parking lot.

“Three and a half miles, this isn't just in the parking lot,” Sandoval said. “This is in the village that's on the flats to the ski slope.”

When asked why the company left the power on, spokesperson Lynsey Paulo sent this statement in the weeks after the Zogg Fire:

“On Sunday, Sept. 27, 2020, at 2:40 pm, the nearest PG&E weather stations to the intersection of Zogg Mine Road and Jenny Bird Lane recorded sustained winds less than 15 mph and wind gusts from 23 to 28 mph. Part of the PSPS criteria is forecasted sustained winds generally above 25 mph and wind gusts in excess of approximately 45 mph, depending on location and site-specific conditions such as temperature, terrain and local climate.”

Those are not the conditions that people living in the hills remember from that day.

Credit: ABC10
Zach McLeod, speaking in the weeks after his wife Alaina and daughter Feyla died in the Zogg Fire, remembered wind speeds of 35 to 40 MPH when he woke up in the hills that day. PG&E said its nearest weather station only registered gusts up to 28 MPH around the time the fire sparked. That station was located in entirely different terrain from where the fire burned.

“When I woke up Sunday morning it was very windy,” Zach McLeod told us weeks after his wife and daughter died in the fire. “I would say probably 35, 40 mile an hour winds.”

PG&E resumed making political donations from its corporate checkbook in 2020, despite stating to US District Judge William Alsup that safety is a more important use of corporate funds.

Credit: AP
US District Court Judge William Alsup is seen outside of his San Francisco courtroom, leading a group of PG&E executives and board members on a tour through the ruins of Paradise, CA in 2019. The company later pleaded guilty to 84 felony counts of manslaughter and another felony for sparking the Camp Fire through criminally negligent maintenance work of the power line that sparked it.

After PG&E pleaded guilty to 84 felony counts of manslaughter for sparking the 2018 Camp Fire that destroyed the town of Paradise, the company gave $1.2 million to a mix of state legislative candidates, ballot initiatives, and other political campaign groups.

Based on the published retail price of the wind monitor PG&E installed downhill from the Zogg Fire (the heavy-duty model runs $1,200) the company could have purchased 1,000 wind speed gauges instead of making those donations.

PG&E could have purchased 377,500 of the monitors with the amount of money it sought to pay as executive and employee bonuses in its recently-closed bankruptcy proceeding.

Alsup has not banned PG&E from making political donations or paying bonuses but has grilled the company about both.

The judge did take the step of banning PG&E from paying out shareholder dividends, arguing that the company took billions as profit in the decades leading up to its wildfires that should have been spent on trimming trees and improving maintenance work instead.

Unless he moves to try to start PG&E’s probation over, the company is set to exit probation in January 2022, at which time Alsup’s jurisdiction over the company would expire.

Zach McLeod called on Judge Alsup to get PG&E’s shutoffs under control and do whatever is necessary to prevent more people from dying in preventable fires.

PG&E admitted to Alsup that the tree suspected of striking its power line and starting the Zogg Fire “may have been identified for removal (but not removed.)”

The judge is trying to learn whether PG&E’s contractors applied spray paint to the tree’s trunk, which is done to identify trees that need to be trimmed or cut down.

Credit: ABC10
Sections of the tree suspected of hitting PG&E's power line and sparking the deadly 2020 Zogg Fire are seen hoisted into the air by a helicopter. The company has not disclosed what it paid to collect leftover evidence after CAL FIRE released the crime scene at the fire's origin beneath PG&E's power line.

PG&E also admitted to Judge Alsup that it does not factor in whether it has done the work to trim and cut down hazardous trees near power lines when making shutoff decisions for each square in its grid.

Alsup set a court date for Wednesday, planning to order the company to start including tree trimming work in its decision-making process for switching off power to the grid cells in its shutoff plan.

The company has not admitted to sparking the Zogg Fire but did spend weeks collecting evidence that was left over after CAL FIRE released the crime scene.

PG&E even brought in a helicopter to haul away entire power poles and the remaining sections of the tree suspected of hitting its line.

“As someone who lives in PG&E territory, I want them to do a better job. I don't want to spend the whole night up because I am scared for myself and my community in high winds,” Sandoval said. “My fear is that I understand the danger more than a lot of people who work for PG&E.”

WATCH NEXT: PG&E: repeat problem may have sparked Camp Fire