What is causing multiple gas line strikes in Sacramento? 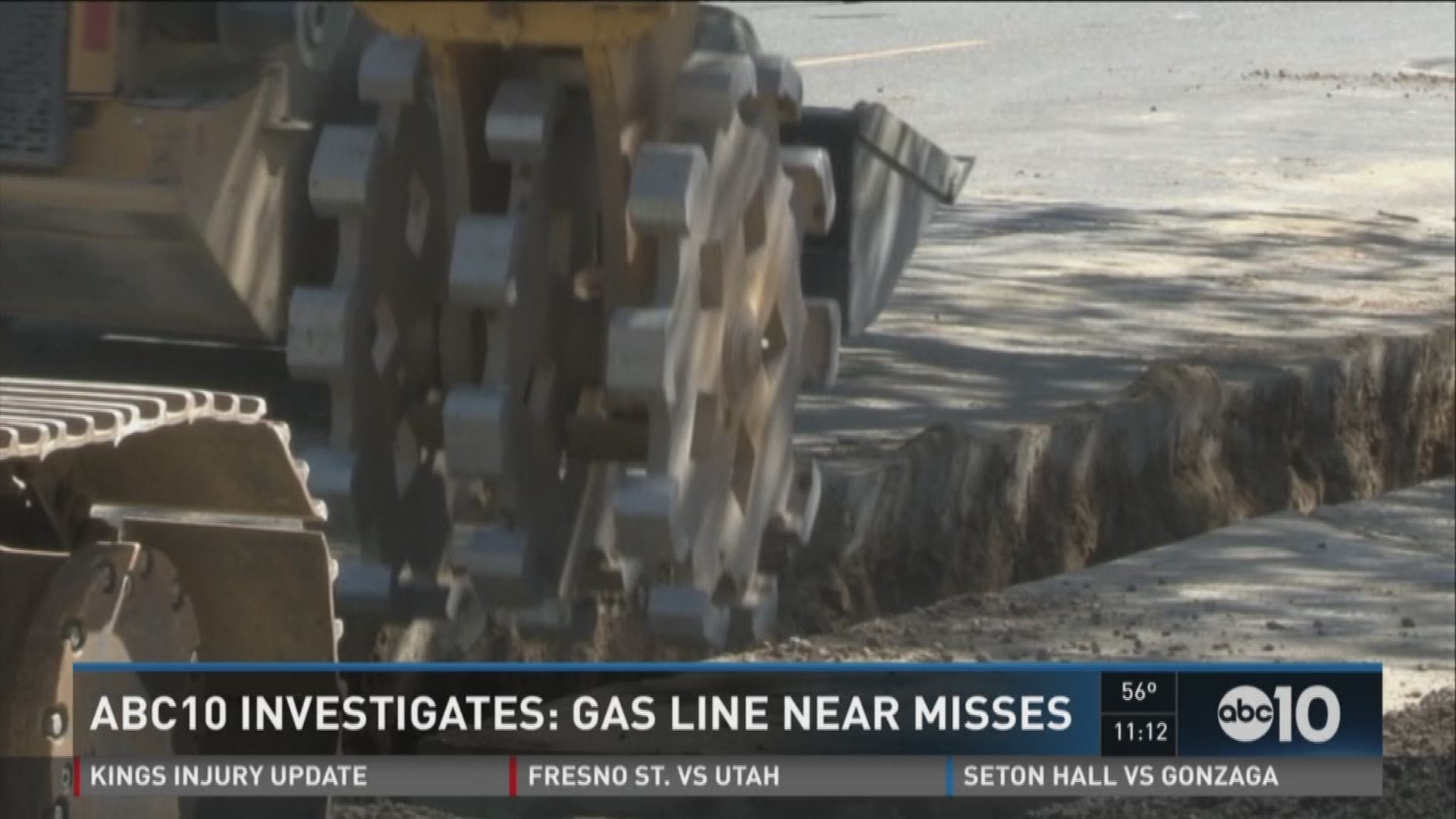 It’s a phrase that causes an adrenaline rush and leads to fears that there could be an explosion. While that explosion hasn't occurred in Sacramento, a large construction project in the city has led to several close calls - too many, according to a national gas safety expert and a California legislator.

The multi-year project calls for contractors to install more than 100 miles of water mains and 105,000 meters in Sacramento. An ABC10 investigation found that since 2012 there have been at least eight “dig-ins” connected to the water meter project. A dig-in is an industry term for when construction workers accidently hit gas lines.

According to PG&E, all of the water meter-related dig-ins were the result of contractor error. In some cases ABC10 found that gas spewed for hours, the force of pressure so powerful it tore apart roads.

Not all gas leaks were that dramatic. In January, 2013, workers drilled through an underground gas line on a leafy Curtis Park block. Nobody noticed at first.

A day later, the homeowners - a family with a toddler and an expectant mother - awoke to the pungent smell of gas in their backyard.

“The leak turned out to be in front of our house within several feet of our main bedroom where we all sleeping,” homeowner Michael Hearn said. Hearn said that PG&E later explained that the leak traveled underground from their front yard, underneath their home and into their back yard.

That initially undetected fissure was an example of what Boston-based gas safety expert Mark McDonald described as one of the most dangerous types of leaks.

“When you breech a gas line with subsurface directional boring, the gas is trapped by the soil," said McDonald, who works for NatGas Consulting. "Now you have gas which is leaking trapped underground which is going to travel towards people’s homes and buildings, it’s extremely dangerous.”

McDonald examined incident reports from the string of gas line problems in Sacramento for ABC10. His assessment was sobering.

“Looking at the data, it’s a matter of when, not if an explosion will occur.”

In 2010, a PG&E gas transmission pipeline in San Bruno exploded, killing eight people. State Senator Jerry Hill said he thinks about the victims of that explosion every day.

Hill represents San Bruno, and he keeps a list of the victims' names in a simple frame on his desk.

“We don’t want to see anymore, and we will see more. Unless we take safety as the issue it should be,” Hill said.

One of the issues that concerns Hill these days is the prevalence of dig-ins like those that have been occurring in Sacramento.

“In Sacramento, the installation of water meters and the water mains has created a lot more excavations, more digging, more markings. It’s just playing out in a more serious fashion,” Hill said.

The last two deadly dig-in incidents in the nation happened in California. In April 2015, a front loader in Fresno came into contact with a high pressure gas transmission pipe, causing an explosion that killed one person and injured 11 others. In November, an agricultural contractor in Bakersfield died in another dig-in accident. A nearby home also was destroyed and several people suffered serious burns.

Hill has authored a bill, The Dig Safe Act of 2016, which would mandate that gas line accidents be tracked and investigated by an independent body.

“There is nothing really being done to make sure that this does not occur again. Everyone points there finger at everyone else,” Hill said.

“Every digging project, no matter how large or small, warrants a call to 811 to have underground utility lines marked for free. Once lines are marked, it's important that hand digging tools-such as a shovel-are used within 24 inches on either side of the line,” Merlo said.

Incident reports obtained by ABC10 also point to contractor error. A report from an accident on 24th Street in 2012 described a dramatic event.

"As the machine pushed through the soil a load gush of gas blasted up. The bore machine had hit the gas main," the report stated.

The force of that gas leak was so powerful that, according to the report, “gas blew for 2 hours 45 mins which left a large void in the roadway.”

There have been two gas line ruptures connected to the water meter project in the last five months. In October, on 21st Street in North Curtis Park, a subcontractor for Navajo Pipelines punched through a gas main. According to the U.S Department of Transportation, which keeps track of gas line breaks which cause more than $50,000 in damage, workers “bored into a 6 inch plastic gas main. The excavator did not have a valid USA ticket.”

Last month there was another gas line dig-in. This time it was in east Sacramento, near Mercy General Hospital. According to PG&E, workers from Teichert construction dug into a six-inch plastic-distribution gas main line.

“The line was clearly and correctly marked. The contractor was at fault,” PG&E said.

Randy Hartley, a volunteer at Mercy General, said there was talk of possible evacuating the hospital. But the order never came.

“We were all prepared to stop ambulances,” Hartley said.

McDonald, the gas safety expert, said there is clearly a dangerous pattern in Sacramento.

“If the industry is not addressing it, then the legislature or the city needs to address it,” he said. McDonald lauded efforts like Hill’s bill.

ABC10 reached out to Teichert construction and Navajo Pipelines for comment, but neither responded.

“Can we do better? Yes, we can…The City is partnering with PG&E and our contractors to develop and implement additional safety training, enhanced contract specifications, and best management practices to eliminate gas dig ins,” Busath wrote.

“The City of Sacramento takes the safety of its customers and employees very seriously. In the last 18 months, according to the City’s data, the City has installed about 16,000 water meters and almost 650,000 feet of pipe without incident for about 99.9 percent of our customers. Can we do better? Yes, we can. Our goal is to eliminate gas line hits. To ensure the integrity of high risk utility lines during construction, the City’s contractors are required to adhere to Underground Service Alert law to prevent damage to utility lines, including gas. The City is coordinating with respective utilities to meet all requirements of the law. The City is partnering with PG&E and our contractors to develop and implement additional safety training, enhanced contract specifications, and best management practices to eliminate gas dig ins.”