A federal judge is demanding answers as to why PG&E decided to give millions to help influence politics instead of fix faulty equipment.

Editor's Note: This article is part of the ABC10 Originals project FIRE - POWER - MONEY, a documentary series that breaks down California’s wildfire crisis into its core elements. In three episodes, we expose the reasons wildfires are deadlier than ever, how PG&E influences our politics despite felony convictions and being blamed for starting fires that killed 107 people, and what it’ll cost to pay for the damage and make California safer from fire.

SACRAMENTO, Calif. — A federal judge demanded the Pacific Gas and Electric Company [PG&E] justify why it’s spending money to influence state politics and not using the money to improve the safety of its power grid instead.

“The Court has learned from [ABC10] that PG&E has made large campaign contributions to political candidates, even quite recently.” Federal District Judge William Alsup wrote in his order. “The offender shall set forth the full amount of campaign contributions…and shall explain why those campaign contributions were more important [than] replacing or repairing the aging transmission lines... and removing or trimming the backlog of hazard trees, and increasing vegetation management.” 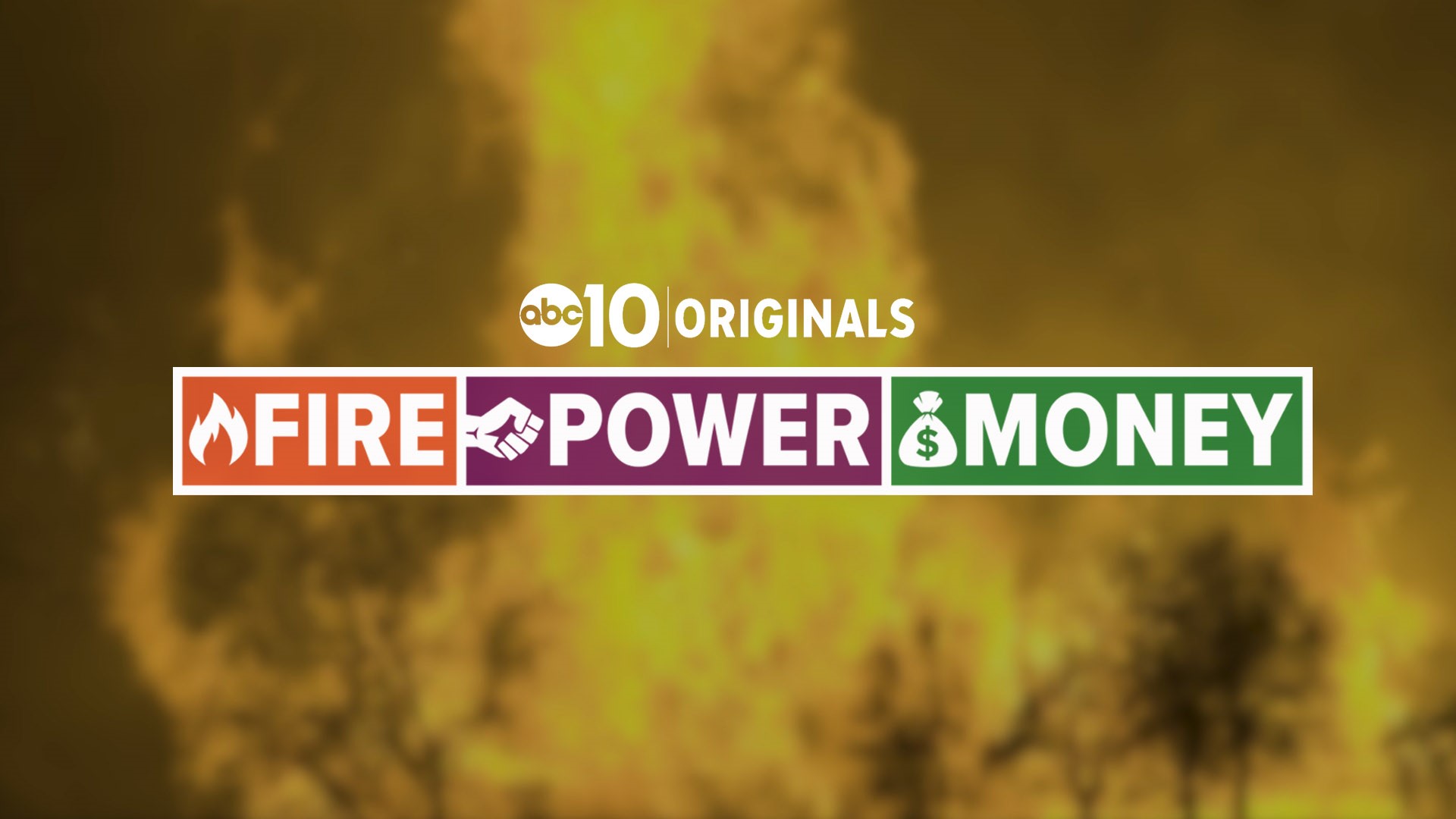 In an investigation of state records, ABC10 found that California’s politicians and political groups accepted $4.4 million in donations from PG&E while the company was a convicted felon, serving its sentence for federal felonies connected to the San Bruno gas explosion, a disaster that killed eight people. It's not illegal for a convicted felon — whether person or corporation — to donate campaign money. And it's not illegal for the politician to accept it.

PG&E refused to answer ABC10’s questions about whether it was morally right to spend that money to influence California’s politics while serving a sentence of probation for federal crimes, but a judge supervising PG&E’s probation is ordering the company to answer to him.

PG&E donated to the campaigns of Gov. Gavin Newsom (D-California), state Attorney General Xavier Becerra, and eight out of 10 state lawmakers, who are voting on bills this week that could decide PG&E’s fate. The money was accepted by numerous elected officials from both the Democratic and Republican party.

“PG&E is a convicted felon,” said Mark Toney, who runs The Utility Reform Network, a customer advocacy group. “Why should a company going into bankruptcy have enough money and be spending their money on buying elected officials?”

The investigation into PG&E’s political spending is part of the ABC10 Originals documentary series, FIRE – POWER – MONEY: California’s burning crisis and how it’s going to cost us all, which breaks down the state’s wildfire crisis and explores the future of electric service in PG&E’s vast monopoly turf.

PG&E UNDER CRIMINAL INVESTIGATION FOR CAMP FIRE, OTHERS

California’s deadliest-ever wildfire was started by PG&E’s Caribou-Palermo transmission line, an official finding that PG&E does not dispute. The origin of the Camp Fire, which killed 85 people when it destroyed the town of Paradise, is detailed in the FIRE episode of the ABC10 series.

“Transmission lines are very resilient to most conditions and they're built to withstand extreme winds. Usually they're not a cause of large damaging fires,” Cal Fire chief Thom Porter told ABC10 for the series. “It's not the kind of thing that we would expect to happen.”

HOW TO CONTROL CALIFORNIA FIRES, SCIENTISTS EXPLAIN | FIRE–POWER–MONEY, EP. 1 OF 3

For best viewing experience, click “YouTube” in the video frame above or this link to open the episode in a new tab.

Since the Camp Fire, PG&E permanently decommissioned that high-voltage line, saying that it discovered a multitude of other safety problems.

In his order, Judge Alsup also demanded that PG&E respond to a story published by the Wall Street Journal, which lays out evidence that PG&E neglected known safety problems on the power line.

PG&E is being investigated for possible criminal charges, but it already has a rap sheet. The company was convicted of six federal felonies in August 2016 and sentenced to 5 years of probation in January 2017.

In the documentary series, Butte County District Attorney Mike Ramsey shared that his office is investigating PG&E for possible criminal charges as serious as 85 counts of manslaughter for the victims who died in the November 2018 Camp Fire—and possible reckless arson charges for the 14,000 homes that burned.

Ramsey says investigators are digging through terabytes of digital information to look for evidence of wrongdoing by PG&E in maintaining its power grid.

“Every day... we discover something new and interesting,” Ramsey said. “What were their actions or lack of action?”

MOST POLITICIANS, BOTH POLITICAL PARTIES REFUSE TO SAY IF DONATIONS WERE ETHICAL

While on probation, the state of California also blames PG&E equipment for sparking 17 wildfires in October 2017 that killed a total of 22 people.

Meantime, the company donated to politicians and political groups of both conservative and liberal ideologies.

Judge Alsup ordered PG&E to list all of its campaign contributions made since January 1, 2017 and answer whether those donations were right to make.

It’s a question most of the politicians who took the money are dodging.

In the POWER episode of the ABC10 series, Gov. Newsom refused to answer whether it was right to take the money from a federal offender on probation. State records show that Newsom’s campaign and his PAC accepted $208,400 in donations from PG&E while the company was a convicted felon on probation.

As governor, Newsom appoints PG&E’s state regulators and will sign any new laws to address the financial crisis facing utility companies like PG&E.

“I wish you luck with whatever you’re working on, but that’s a strange question,” the governor replied when confronted by ABC10 at a press conference. “I don’t know what more I can say.”

For best viewing experience, click “YouTube” in the video frame above or this link to open the episode in a new tab.

The company also gave money indirectly to state Attorney General Xavier Becerra, through a political spending group called “Building and Protecting a Strong California,” which paid $197,264 of television ads for Becerra’s re-election campaign. Becerra’s office did not respond to our questions about how he intends to remain impartial while assisting Ramsey’s office in pursuing possible criminal charges against PG&E after taking that donation.

As a felon on probation, the company directly donated more than $550,000 to both the state Republican and Democratic parties. Neither party responded to our questions about whether it was right to accept the donations.

THE QUESTION PG&E DODGED AND IS BEING FORCED TO ANSWER: ‘WHY IS THAT OKAY?’

PG&E refused to answer ABC10’s only written question about making all of the political donations while serving its sentence: “Why is that okay?”

Spokeswoman Lynsey Paulo responded by saying that the donations were compliant with the law, which is correct, but doesn’t answer the question.

Judge Alsup did not ban PG&E from spending money to influence politics. After compiling the information on PG&E’s political spending, ABC10 asked the judge why he didn’t ban the spending—despite his repeated criticism of PG&E’s attempts to influence state politics, including its “well-oiled lobbying efforts,” which totaled $12 million at the state level in 2017 & 2018… and $14 million to lobby the US Congress in the same time.

Not every politician who took the money thinks it was okay. One state lawmaker, Republican Sen. Ling Ling Chang (R – Diamond Bar) said she gave away her $4,000 PG&E donation to charities, but responded after the deadline for the documentary series.

One question we sent to all 98 lawmakers who took the money was: “Should convicted felons be allowed to contribute to political campaigns?”

Sen. Chang replied, “no.” Chang has not replied to our follow-up question asking whether she would sponsor legislation restricting corporate offenders from making political contributions while on probation.

Sen. Anthony Portantino (D-Glendale) was the first to give up his PG&E money. He donated his $4,000 to recovery for Butte County schools, some of which burned down in the Camp Fire.

FEW LAWMAKERS RETURNED THE MONEY AFTER OUR INVESTIGATION

Portantino and Chang have very little company at the state Capitol in returning PG&E’s money.

PG&E donated money to 98 sitting state lawmakers, who are voting on bills this week to decide the fate of PG&E.

In the MONEY episode of the docuseries, we reported that a supermajority of the legislature refused to answer our questions about whether the donations were ethical and should be returned.

Of the 98 lawmakers who took the money, two members (one Republican and one Democrat) have given away a combined $8,000 of PG&E money by donating it to charity since ABC10 asked.

One member returned part of his money to PG&E and two others gave away all of the money before our questions.

That leaves 94 of 120 legislators—a 78% supermajority—who’ve decided to keep some or all of PG&E’s political money at this point.

ABC10 is maintaining an updated list of all 98 lawmakers and their responses.

THE FUTURE OF PG&E IS UNCERTAIN

Regulators are actively working to decide whether PG&E can retain its monopoly, which never expires and covers a land mass the size of Oklahoma.

Sixteen million people have no choice but to buy their electric service from PG&E, a number that amounts to four out of every 10 people in California. If PG&E’s turf were granted statehood, it would be the fifth most populated state in the nation, just behind New York.

PG&E filed for Chapter 11 bankruptcy protection in January 2019, claiming that it's at risk of going out of business.

“Does it make sense to break up this company? And if so how would you do that? I don't pretend to know the answer,” said former public utilities judge Steve Weissman, who used to oversee disputes about power companies for the California Public Utilities Commission. “Nobody knows the answer to that right now, not in a studied kind of way.”

The POWER and MONEY episodes of FIRE – POWER -MONEY explore several alternatives and the costs to taxpayers.

No matter what happens to PG&E, nearly everyone involved in California’s wildfire crisis agrees that we need to buy down the danger in our forests.

“People really need to take this issue really seriously,” said US Forest Service ecologist Hugh Safford. “They're at much higher fire risk than I think they imagine.”

In the FIRE and MONEY episodes, Safford details what scientists know about how wildfires have grown worse in California and what methods are effective to reduce the danger.

The documentary also explores new lifesaving tools that can be used to improve the changes of evacuating communities to safety, because fire scientists say it will take decades to restore California’s forests to healthier conditions.

If you have a tip about this or any other story, please email reporter Brandon Rittiman at brittiman@abc10.com – you can also follow him on Facebook or Twitter.

CORRECTION: An earlier version of this story incorrectly expressed the percentage of Californians who live in PG&E territory as one out of every four. It is 40%, or four out of every 10 people. We regret the error.