An El Dorado Hills-based software company has successfully created and launched a game for Xbox called Driving Essentials XE, which aims to help young drivers learn the basics of the road and deal with dangerous, distracting situations. 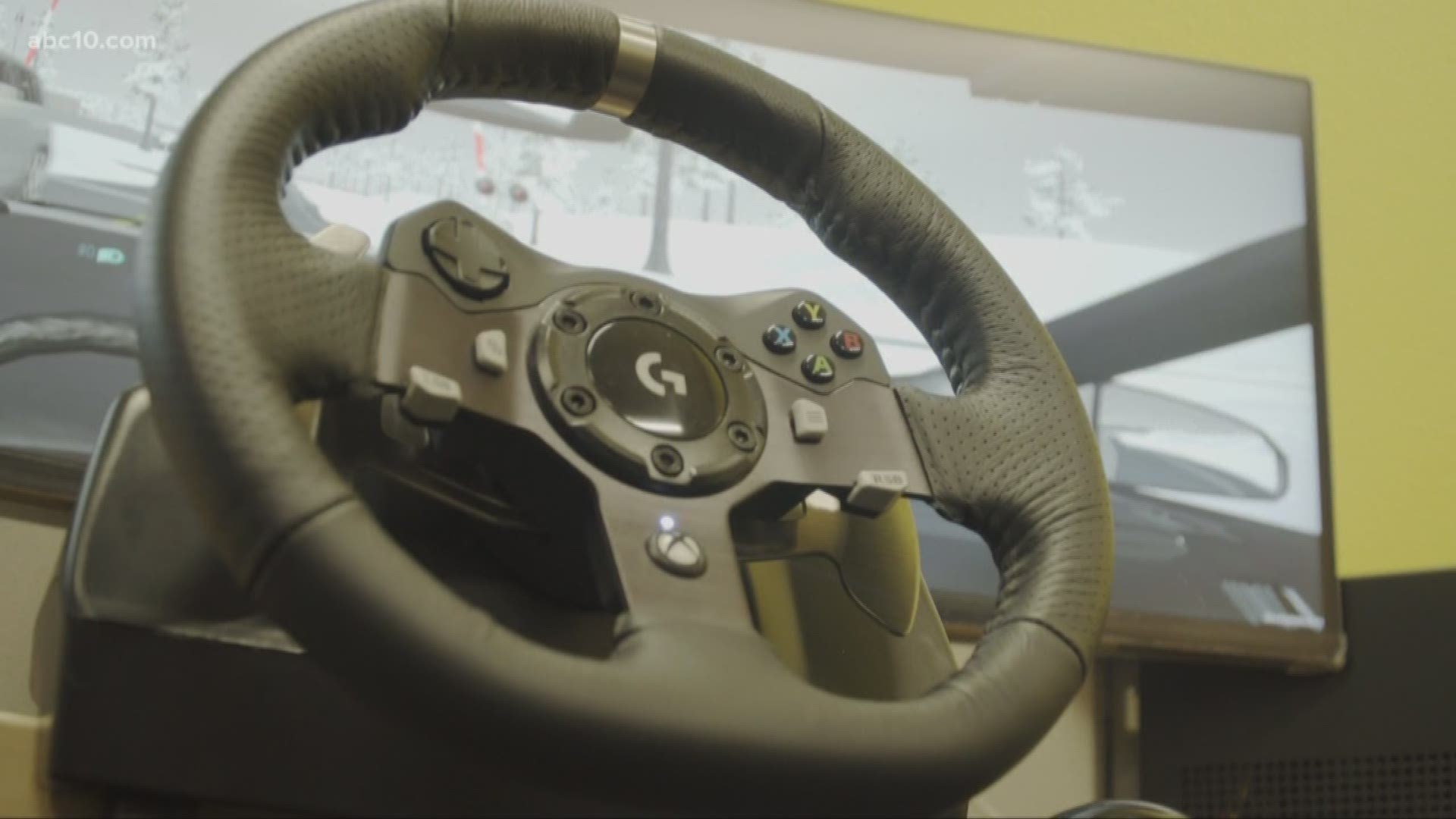 EL DORADO HILLS, Calif. — The late afternoon sunshine poured into 16-year-old Alex Ferron’s living room Monday, as he sat on the couch playing Xbox. On the TV screen in front of him, a car he was controlling navigated a city street.

Like many of his peers, Alex is working on getting his driver license – something he hopes to achieve by September.

However, He's also getting help from his Xbox.

The game this Folsom teen was playing is called Driving Essentials XE. It was developed just a few miles from his house over in El Dorado Hills, but it’s now available to teens with Xboxes nationwide.

"You're in a hands-on experience with it,” Alex explained.

Bob Davis is CEO and president of Virtual Driver Interactive, a 10-year-old El Dorado Hills-based software company that makes hands-on tools that school districts and other organizations can purchase to teach teens about safe driving. Their system, called Driving Essentials, comes with a steering wheel controller, gas- and brake pedals adapter, and a special wide screen. The unit and program come as a package for about $10,000, Davis explained.

Driving Essentials XE, launched last month, is the Xbox version – and the company's first foray into consumer-level driving software. The game is $40 and available for download via the Xbox store.

It doesn’t require the purchase of any additional equipment, because players control the vehicle with the regular Xbox controller.

“We want teens to realize there's no such thing as a 'minor crash,'" Davis explained. "Even a minor crash is, at best, expensive, and at worst, it's a fatality.”

The game comes with 10 separate lessons, which is everything from the basics of driving to how weather affects road conditions.

“There’s an entire lesson here that’s specifically on distracted driving,” Davis said. “All the rest of the lesson is teaching you how to drive, where to look, how to anticipate, but, if you’re distracted, all those skills go out the window anyway. So, the distracted driving lesson actually does have you multi-task as you’re doing the driving itself.”

According to the US Centers for Disease Control and Prevention, car crashes are the leading cause of death for teens, and the CDC says teen drivers ages 16 to 19 are almost three times more likely than drivers 20 and older to be in a fatal crash.

"Fortunately, teen motor vehicle crashes are preventable, and proven strategies can improve the safety of young drivers on the road," the CDC says.

Lessons in this game present teens with unpredictable and even dangerous virtual situations.

“We wanted to give them exposure to things like black ice on the way to Tahoe or distracted pedestrians," Davis said.

"Adults are very good anticipating - probably because they've had near-misses or actual crashes before, where teens just do not have that experience,” added Andrew Luongo, vice president of product development for Virtual Driver Interactive. “Good news is, in this game, we can give them those experiences."

At Virtual Driver Interactive’s offices Monday, he demonstrated for ABC10 one of the game’s lessons, called “What If.”

"What if he doesn't turn and you decide to pull out?" the game’s instructor voice says, as the first-person, behind-the-wheel perspective shows an approaching driver with his right-turn blinker on.

The car, instead of turning right like it was signaling, continues on in front of the player’s car. The game then shows what would have happened if the player had pulled out into traffic.

Brakes squeal, and a crash happens.

"As I said, things don't always go as planned,” the narrator says.

"Only gaming techniques can get you to visualize that kind of thing," Davis said.

The game’s virtual the crash stuck with Alex.

"Of course, like, everyone's scared about getting into crashes, but once they see that, it's very eye-opening,” he said. “It makes you think a lot about what would happen."

Alex's mom Adrienne Ferron said she tries teaching her son about defensive driving - and this game helps with that.

"It's been an awesome opportunity for Alex to really get interactive training before he's on the road,” she told ABC10. "We personally had an experience just about a month ago where we were driving on East Natoma and a car went flying through a red light…if someone had been crossing through the crosswalk, it would've been a disastrous situation. And so, in this particular game, you have an opportunity to face some of those things without the brutal reality of what could be."

"It's just putting you in that perspective where it's like, you really don't think about it until it happens,” Alex said, of the game.

Developers worked to strike a balance between engaging and educational.

Unlike other car-related Xbox games, a player can’t use excessive speed or cause intentional damage. If a player tries doing that, the lesson will end and the player will be directed to start again, but the game has to be fun enough for a teen to pay attention and learn. Like other games, Driving Essentials XE gives and subtracts points based on how well the player is driving.

Ferron said she sees the Driving Essentials XE as one more way that she, as a mom, has to help prepare her son for his time on the road.

“Obviously, driving is a privilege, but I definitely feel like this has been an additional tool that makes me feel comfortable for him to be as prepared as he possibly can when he gets to hit that landmark day,” she said.

“The whole idea is, they should be able to walk away from the game, get in a car, and be thinking in the back of their head the whole time,” Luongo said. “Within an hour or so of training, we can make a lot happen. We can give them the experiences they need, and, of course they can do it over and over again, there’s a lot of free-drive action.”

Luongo and Davis came up with their company’s games as their own children were learning how to drive, and the company is working on adapting the game for PlayStation.