‘Every county’ has towns that can burn like Paradise, Cal Fire chief says 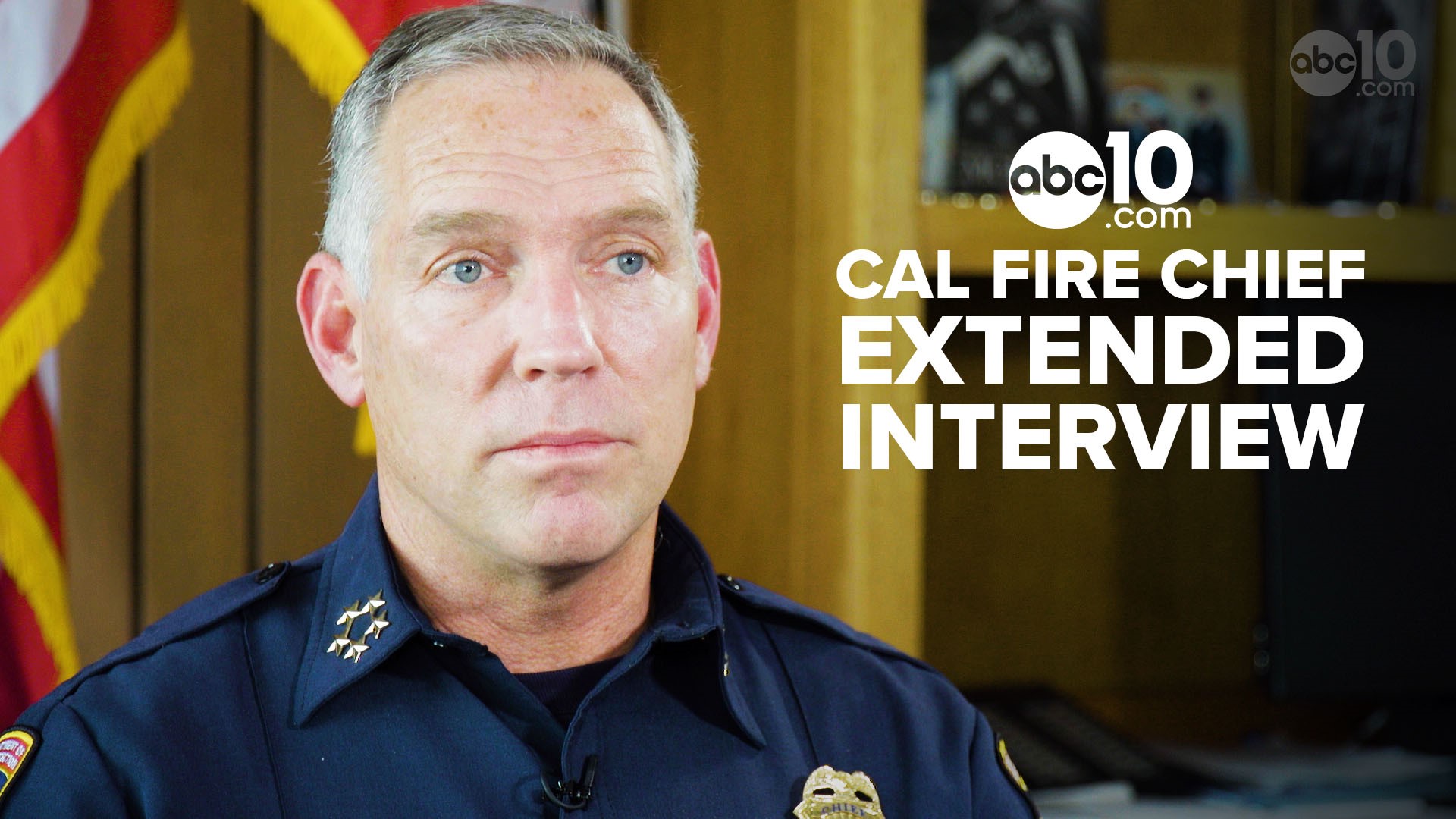 SACRAMENTO, Calif. — The level of destruction left by the deadliest wildfire in California history could repeat itself in virtually every corner of the state, the new chief of Cal Fire told ABC10.

“Every county in California has communities that could be impacted like Paradise was by wildfire,” said chief Thom Porter when asked whether it’s possible we could see another whole town destroyed by fire. “Maybe not San Francisco County and Imperial County is a ‘possible’ depending on grass crop during rainy seasons, which this is one.”

The entire town of Paradise and the surrounding ridge community where 40,000 people lived was destroyed in the 2018 Camp Fire. A Cal Fire investigation placed the blame for the fire on equipment owned by the power monopoly PG&E, a finding Porter says he has no doubts about.

Porter, a career firefighter who rose through the Cal Fire ranks from his work in the San Diego area, says it’s an example of why he subscribes to the philosophy that California has entered a “new normal.”

“In the first two-thirds of my career, the old-timers would talk about ‘career fires.’ They would talk about ‘see you on the big one.’ We don’t talk about that anymore. It is almost gone from our vocabulary,” Porter said. “We are finding times where we’re having multiple career fires every single season. Sometimes at the same time. And it is really stretching our system to the bone.”

Porter sat down for an extensive interview with ABC10 reporter Brandon Rittiman for an upcoming series on the state’s wildfire crisis.

TRYING TO SAVE MORE LIVES

For the first 24 hours of the Camp Fire, firefighting wasn’t the focus of the crews who responded. It was a giant evacuation-and-rescue mission.

Despite the effort, 85 people died. The vast majority of the dead never managed to make it out of their homes.

Paradise had a population that was older and had more disabilities than average, but ABC10 documented cases in which people chose not to evacuate because orders to do so never reached them.

“We really did practice that ahead of time,” Porter said. “It really is the truth that there could’ve been many, many more deaths in that fire had we not had a pro-active community.”

Still, the Camp Fire exceeded the worst-case scenarios envisioned by emergency planners in Butte County. Porter says it’s time for communities to re-think how bad their worst possible fire could really be, but cautioned that plans can only anticipate so many scenarios.

“That is always a big problem for us. Fires dictate different circumstances every single time, so you can’t really pre-script an evacuation,” Porter said.

TAKE CHARGE OF YOUR OWN SAFETY

Porter said the Camp Fire showed that people need to be prepared to evacuate from wildfire zones even if they haven’t been able to receive warning and evacuation messages.

If you’re unsure whether it’s time to go, he urges that you err on the side of caution.

“If a warning never comes and you’ve left, then you can always come back,” Porter said. “If you’ve left early then you’re ahead of the crunch that might occur when evacuation orders turn into mandatory.”

In addition to seeking advice on how to improve fire safety on your property, Porter says local fire agencies and fire-safe councils can also be good places to seek advice in advance on how best to survive if a fire comes.

Firefighters are trained to constantly look for escape routes and safety zones, locations with enough safe distance from fuel to survive as a fire burns all around.

They also train to watch which way the smoke is going, something else that can be useful for everyone living in fire-prone areas.

“I’m not saying every smoke is going to turn into a Camp Fire, but when you’re in a location where the smoke is coming to you… or it’s dark out because the smoke has overtaken the sun, it’s likely that fire’s coming your direction,” Porter said.

PROBLEMS WITH THE ELECTRIC GRID

Porter said that Cal Fire has no doubt about its finding that PG&E equipment started the Camp Fire.

“There was a failure of parts of the system that caused arcing and molten material to fall from their high-tension lines, transmission lines, which usually doesn’t cause fires,” Porter said.

The findings have been forwarded to prosecutors, who are still deciding whether to file criminal charges against PG&E or any of its employees.

The company is currently serving a sentence of probation for six federal felony convictions.

Unlike neighborhood-level distribution lines, transmission lines are generally considered less risky in bad fire weather because they are strung on high-tension towers that carry them above most treetops.

Partly for this reason, PG&E did not include transmission lines in its plans to shut off power for fire safety last year. They weren’t seen as being a likely cause of fire.

“It’s not the kind of thing that we would expect to happen,” Porter said.

That’s changed in 2019. PG&E says it will be shutting off transmission lines during periods of high fire danger this year.

Critics of the company see this as a tacit admission that PG&E considers some of its heaviest-duty equipment to be substandard.

Porter gave a guarded answer when asked if he has faith that the shutoff plans PG&E and other power companies have made will be effective at preventing fires.

“It’s growing,” he said of the safety shutoff program. “It has a ways to go. It will mature over time.”

Shutting off the larger power lines has the potential to cause more widespread power outages this fire season that will last longer.

“We need to be as ready for power to be out for several days as we are for earthquakes and fire evacuations,” Porter said.

Improving the safety of the power grid will only get us so far. Cal Fire estimates that electrical equipment is only responsible for starting about 10 percent of the state’s wildland fires.

The bigger problem? California’s landscape is sick and hardly any of us really know it.

Global warming has led to more days with bad fire weather, but there’s another problem on the ground in California: Tens of millions of acres are overgrown and packed with because we’ve been putting out every wildfire we could since California was settled in the mid-1800s.

“We have a generation of people who have never known what a healthy forest actually looks like,” Porter said. “We have grown up really seeing forest that is not in a healthy state.”

Fire scientists say we lost the beneficial effect of wildfires that used to be started by natural causes and Native American people. Ecologists estimate those fires used to reduce fuel on about a million acres of California every year.

Now, foresters are targeting that number as the ongoing goal to restore California to a more fire-safe condition by reducing fuels on 500,000 acres of federal land here each year and another 500,000 on state and private land.

Fuel reduction work generally costs between $500-2000 per acre, depending on the method and location. That means the price tag of this ongoing million-acre target would be between $500 million and $2 billion per year.

That may sound outrageous, but it starts to look reasonable when you consider that the state estimates that it will cost $2 billion just to remove the debris from the nearly 20,000 buildings that burned in the Camp Fire last year.

“We know that it’s cheaper for us to do fire prevention and reduce the catastrophic effects of wildfire by doing this fuel reduction project work,” Porter said. “It’s still a very expensive undertaking to do this kind of landscape-level work.”

Porter says we’re getting closer to the target amount of fuel reduction work.

If we meet it, he says the grandchildren of today’s generation could see a day when the forests aren’t prone to mega-fires.

“We have neglected forest management and wildland health for decades,” Porter said. “It’s going to take decades to turn that.”

Brandon Rittiman is a journalist with the ABC10 special projects team. If you have a tip about this or any other story, send him an email at brittiman@abc10.com.