‘I get to die the way I lived, which is in charge’: N.J. man diagnosed with terminal cancer moves to California to legally end his life

New Jersey native Kevin Roster moved to Sacramento to end his life under California's right-to-die law, but first, he plans to win the World Series of Poker. 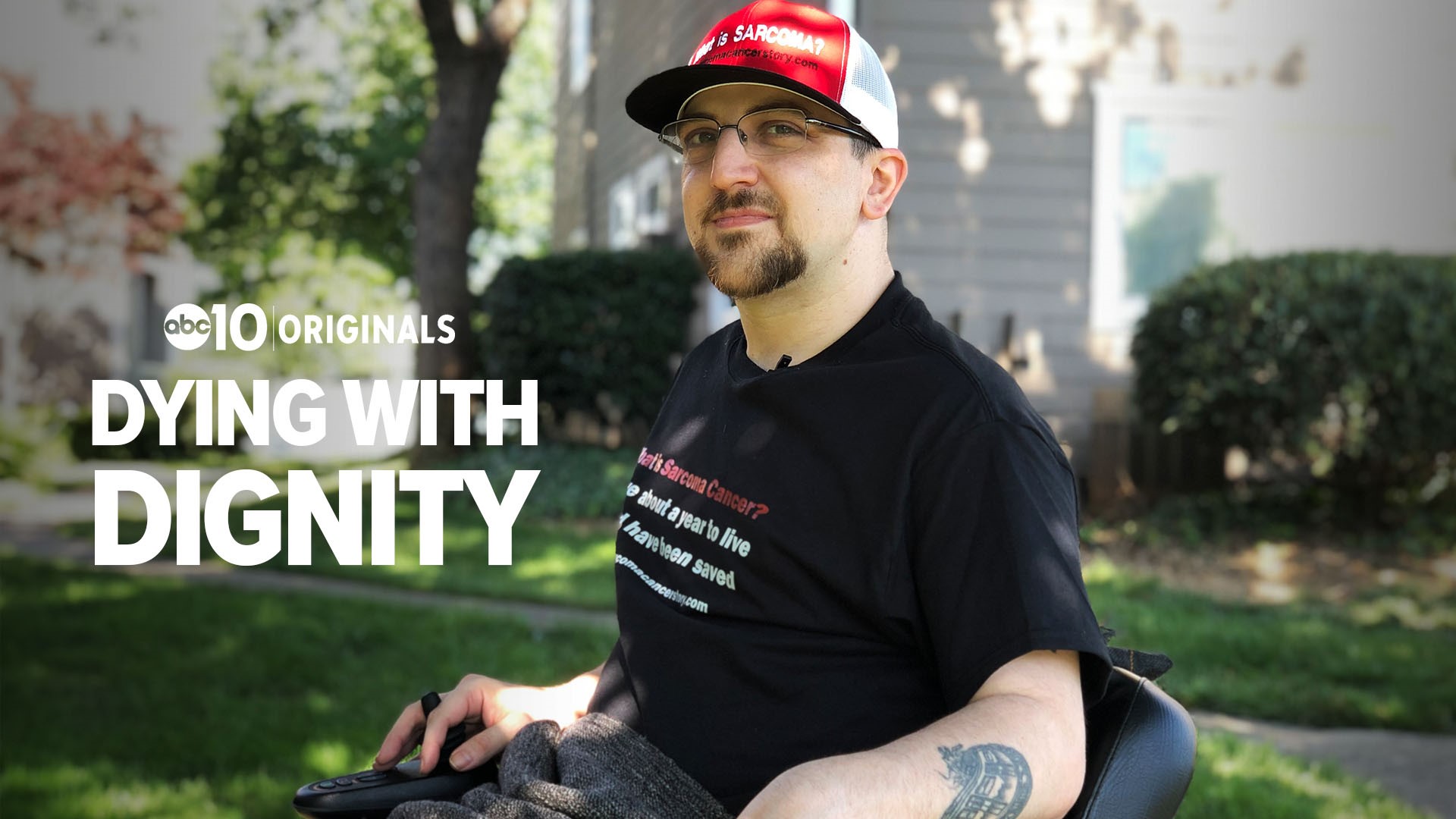 On July 26, 2019, Kevin Roster died. In a blog post, he announced he is chose to, "peacefully end my fight with sarcoma from a position of strength via the use of medical aid."

Kevin Roster is a take-charge New Jersey native with a love for poker. He also happens to have been diagnosed with a terminal illness and with months to live, he's deciding how to die.

Kevin played poker for a living, sponsored as a pro until online poker was criminalized.

He then built a successful business in New Jersey selling collectible items on eBay. Now, he’s living out his dream of traveling like a pro.

“Poker is home for me. When I'm playing poker, I'm less in pain and I'm happier,” he added. “I'm less cognizant of being in pain, of the phantom pain that I'm in pretty much constantly from the missing limb. And nobody could tell that I have one leg when I'm sitting at the poker table.”

RELATED: The right to die: 2 people share their stories with the controversial law

Credit: ABC10/KXTV
Kevin Roster has a love for poker and before he dies, he's hoping to compete at the World Series of Poker in Las Vegas.

Kevin’s left leg was amputated all the way to the sitting bone in April. He suffers a rare type of Sarcoma that makes his tumors accelerate rapidly.

He said, “Sarcoma patients tend to turn quickly, which is why I had put such an emphasis on getting out here to California and getting into the World Series of Poker very quickly, because they told me I have weeks to live and I want to maximize the amount of life I can fit into those weeks.”

In 2017, a doctor told him a lump on his leg was benign. He had late stage-three cancer by the time doctors discovered the magnitude of his disease. He had two surgeries to remove the tumors rapidly growing along his leg and after the second surgery was told that he no longer had cancer.

He went on vacation to celebrate. But on the last day of his "cancer-free" vacation, he heard from his second-opinion clinic that he had to come in immediately. He still had cancer and the tumors were growing fast.

Kevin underwent chemotherapy, radiation, took targeted and experimental drugs and ultimately lost his leg. After the amputation, he was told his prognosis went from between 6 months and a year left of life to a matter of weeks.

He said if his doctors hadn’t failed at diagnosing his Sarcoma for four months, rare cancer would have been caught while still in early stage two, and he suspects he would have had a shot at surviving.

In Vegas, at the World Series of Poker, he said “hopefully I can make something happen and I can reach some people and tell them something about Sarcoma. So, when their doctor tells them it’s benign, they ask for a biopsy, because if I would have heard the word Sarcoma, I would have had a chance.”

Credit: ABC10/KXTV
Kevin Roster created merchandise to spread awareness about the rare cancer, Sarcoma, that he is diagnosed with.

After the tournament, Kevin plans to make use of California’s right-to-die law. California is one of nine jurisdictions where physician-assisted death is legal, but 18 states have drafted legislation to legalize it since January 2019.

The law passed in New Jersey, but Kevin said he doesn’t believe he had the time to wait for it to come into effect and get access to the medication.

According to a California Department of Public Health report, in 2017, 632 individuals in the state started the end-of-life option process for medical aid in dying, by making two verbal requests to their physicians at least 15 days apart. Of those, 363 died as a result of the medication.

Less than 10 percent of people who chose to end their life this way are under the age of 60.

Not everyone suffering from a terminal illness is eligible for the medication, which is administered only to consenting adults and requires the approval of two different physicians.

According to a Journal of Palliative Medicine online survey, a “majority of study participants in California (72.5 percent) were supportive of PAD [physician-assisted death].”

And according to a Gallup Poll, 72 percent of U.S. adults agreed that “When a person has a disease that cannot be cured…doctors should be allowed by law to end the patient's life by some painless means if the patient and his or her family request it.”

Kevin explained that the way people suffering from his condition die is brutally painful and he will become highly dependent, which is why he has chosen to die before cancer takes the best of him.

“It’s not about death, it’s about life,” he said. "It's a process of courage and not cowardice.”

Although he has faced criticism from people who oppose the law and the medication, especially online, he said, “medical aid in dying is not suicide, because people who commit suicide don't wanna live. I want to live more than anything, I just don't have any way to do it."

He is currently in Las Vegas, already participating in the World Series of Poker initial games.

He is fundraising to be able to participate in the main events taking place through July 16 and if he wins the bracelet, he hopes he will get enough coverage on sports networks to spread the word about Sarcoma and donate the winnings to St. Jude’s Children’s hospital.

Although he is spending the last moments of his life gambling, he’s not gambling on how the end will come.

He said the thing he learned about life is that “it’s not about the money,” and he hopes the tournament will give a chance for the legacy he leaves to his son to be, “from somebody who worked a lot and did good in business, to somebody who genuinely helped people at the end of their life.”