Omar Ameen is a suspect in the 2014 killing of an Iraqi police officer. The Iraqi government alleges Ameen has been a member of Al Qaeda and ISIS. 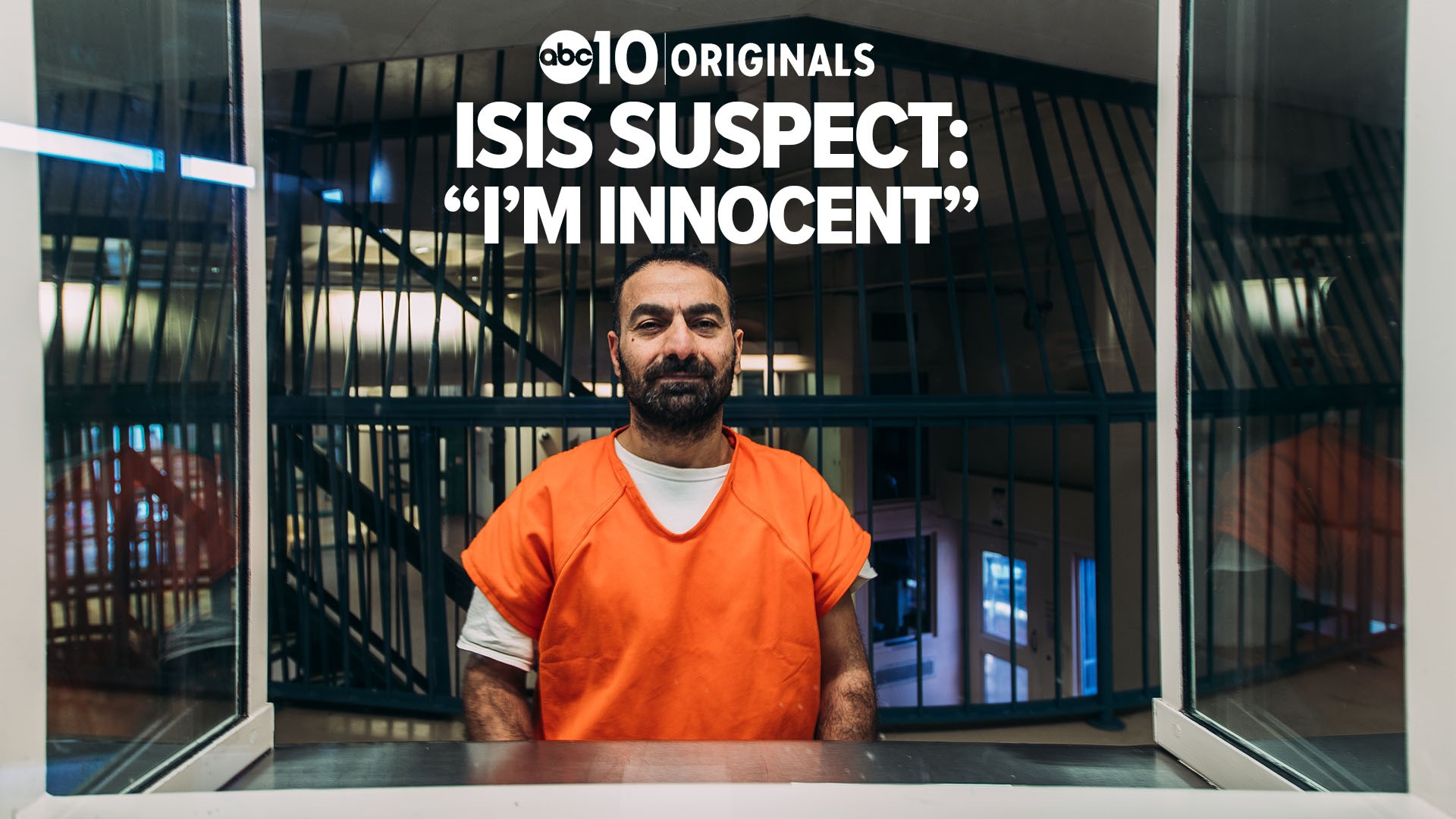 SACRAMENTO, Calif. — The morning federal agents came for him, Omar Ameen was asleep. He remembers waking up to the sound of his young son knocking on his bedroom door.

"The police want to take you away," he recalls his son saying.

It was the worst moment of his life, Ameen, speaking through a translator, told ABC10 in an exclusive interview. Police showed up at his Arden-Arcade apartment to arrest him as part of an extradition request from the Iraqi government, accusing him of killing a police officer on behalf of ISIS four years earlier.

"I was very scared," Ameen said. "I didn't know when I was going to see [my family] again."

Ameen was allegedly part of a convoy of ISIS fighters that opened fire on an Iraqi police officer's home in June 2014, according to the Iraqi government's extradition request. The complaint said an eyewitness then saw Ameen approach the officer and shoot him after the officer came outside to defend the home.

The original criminal complaint, which, under Iraqi law, can only be made by a close blood relative, appeared to be filed by the victim's parents, who now say they must have been tricked into signing such a complaint since they believe Omar is innocent.

"Omar was not among the ISIS members, and I did not request a complaint against him," the victim's father said in a sworn statement recently filed in by Ameen's defense team. "There is a good relationship between us, and I didn't hear or see Omar taking part in the murder of my son."

The family has since rescinded the complaint, yet the government is continuing to move forward with their extradition request.

Ameen, 45, had come to the United States as a refugee to escape the violence he's now accused of carrying out. His attorneys argue it would've been impossible for him to have committed the murder he's charged with since he was in Turkey at the time of the killing.

"He is too kind a person for that," a friend of Ameen's said. "He was not political or ideological. He just wanted to make a better life for his family."

In more than a dozen sworn statements, people describe Ameen as a "great guy," who was "not very religious," and whose goal was to leave Iraq and "live somewhere more prosperous and safe... to raise his children in a good, clean environment."

These accounts paint a wholly different picture than the one presented in Iraq's extradition request, which alleges Ameen has been a member of Al Qaeda in Iraq, then ISIS, since 2004. It also says he has "committed the most heinous crimes against the citizens and security forces," including planting improvised explosive devices, robbery, kidnapping, and murder. Witnesses interviewed by the FBI said Ameen would drive around his hometown of Rawah in an SUV with a machine gun mounted on the rear and walk the streets with an AK-47.

"I was never with any such group," Ameen told ABC10. "Not even for a day. I have nothing to do with groups like that."

Ameen's family and friends also say those accusations and characterizations are false.

"Omar is not an Al-Qaeda in Iraq member or a member of ISIS," Ahmed Azzam, a friend Ameen met while living in Turkey, told defense investigators. "He doesn't support what they've done. During all my times with him, I have never seen him express an ideology consistent with, or supportive, of those groups."

Azzam first met Ameen in Turkey in 2012. Ameen arrived in the country that April with his wife, Khansaa, and their three young children, Ahmed, Zakariyya, and Fatima. He then began the process of applying for refugee status and settled in Mersin, a large port city in southern Turkey on the Mediterranean coast.

"He was focused on his refugee status," Azzam said. "All he wanted to do was get permission to leave Turkey and go somewhere safe."

Ameen and his family received their refugee certificates in September 2013, but in order for them to qualify for resettlement in a third country, like the United States, he would have to meet a number of requirements, including surrendering his Iraqi passport and weekly, in-person sign-ins with Turkish authorities.

"He took his responsibilities in Mersin very seriously," Azzam said. "I would go to the foreigners police station with Omar to sign in with him all through 2012 when I lived there."

Sign-in sheets obtained from Turkish authorities by Ameen's defense team appear to show Ameen signed in at the Mersin Immigration Office on July 19, 2014, three days before the alleged murder, and June 26, 2014, four days after the murder.

Since Ameen had surrendered his passport, and any travel outside of Mersin would need approval by the foreigner's police in Turkey, his attorneys argue he would've had to travel overland, more than 600 miles each way, possibly through Syria during an ongoing civil war, to reach the town where the killing occurred.

"A journey on land from Turkey to Iraq is practically impossible," one of Omar's friends said in a statement to the defense. "Before July 2014, the Iraq-Syria border was heavily guarded and it was very difficult to get across it. There are too many checkpoints and control zones with different groups that one would run into from the Turkish army, ISIS, and groups aligned with the Free Syrian Army. One would have to be a superhero to make this journey."

Ameen told ABC10 that he never left Turkey from April 2012 until his departure to the United States in November 2014. It's these types of allegations that keep him up at night.

"I sometimes talk on the phone to my son, and he asks me, 'Are you ever getting out?' And I don't even have an answer for that," Ameen said. "I don't know what to tell him. I don't even know myself. I'm in the unknown."

Ameen's extradition hearing is scheduled for May 28, 2019.